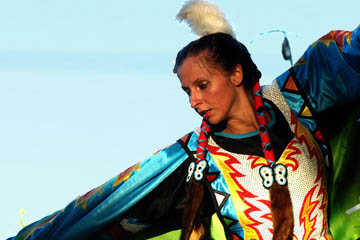 I’m pretty much as white as you can get if you take a look at me from afar.

My mom is 100% German, and my dad’s side of the family is half Irish, half German (yeah, that’s a lot of German…and whiteness).

Yet I tend to appreciate the wisdom of Ayurveda and Traditional Chinese Medicine over western medicine, I’ve been trying to figure out how to find my way to an authentic Native American sweat lodge for years, and I’ll take some coconut curry over steak and potatoes any day of the week, thank you very much.

And when I dress up to perform Bhangra, a traditional Indian folk dance, I’ve been mistaken for being Indian on more than one occassion.

I’ve felt embarrassed at times for being the white girl walking down the street with a bindi on her forehead (and I’ve certainly overheard a few comments). I sometimes want to turn around and explain I’m dressed this way for a performance, that I’m part of a multi-cultural dance troupe, etc., but then I realize I’m just fishing for justifications.

So when I happened upon Macon D.’s Stuff White People Do blog about romanticizing Indigenous people, I began to contemplate the idea that more and more white people (especially of my generation) need to identify with and take part, some say culturally appropriate, other cultures’ traditions:

So often, white people who want to reach out beyond the boundaries of “normal” life end up reaching too much into the lives of others. Actually, and oddly enough, when they think they’re reaching out to something authentically non-white, what they’re actually doing is conjuring up a fantasized, stereotypical, and romanticized version of something that’s only supposedly non-white.

Macon D. was commenting on an explosive situation that occurred between a Burning Man (BM) group and several Oakland, CA Native American tribes. The BM group had planned a party with a “Go Native!” theme, prompting the Native American activists to demand a cancellation of the event.

A Hopi woman had this to say:

I’m trying to articulate my feelings as best I can without completely losing it. What we do is not an artistic expression. And you don’t have artistic license to take little pieces here and there and do what you want with it. That’s something you people don’t understand, probably never will understand.

Following this thought process, how do we contextualize those white people who choose religions that are traditionally tied to another culture? Star.com recently ran an article, White by Birth, Sikh by Choice about a white man raised in the United Church who became a practicing Sikh in 1972.

According to the article, he still gets many looks when he walks down the street, dressed in a turban, flowing pants and shirt with a long beard. But the looks don’t bother him at this point, and he knew at a very young age that he didn’t fit in with those that surrounded him.

I’m all for people being able to choose, whether it be the way they dress, the groups they affiliate with, or their religion, considering I have personally gone down different cultural paths in all of these areas.

But, I wonder, are some white people (including myself) going too far in trying to be something different than they really are? Share your thoughts below.

In Tibet, New Year is celebrated with barley, dumpling soup, and a lot of yak butter