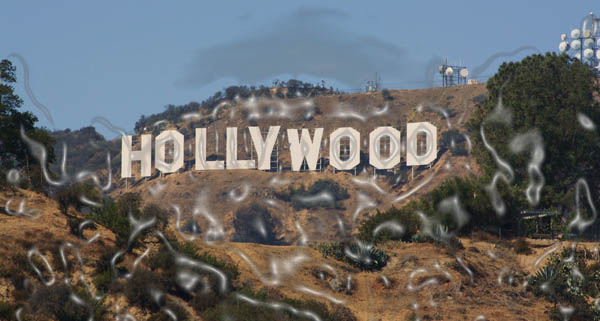 The plastic glory of Hollywood is revered and reviled the world over. Natalie Grant thinks we need to celebrate escapism as much as indie reality.

Eventually I spotted two normal-ish young gentlemen (what were they doing there amongst the oppressed peoples of the upper middle-class?) and what they were peddling: angry bumper stickers with a revolutionary message: F*$# Hollywood!

As any traveling American will tell you, it’s hard work facing stubborn opinions of our culture.

I’m no stranger to hearing the H-bomb, which is what happens when the somewhat oblivious dilettantes express their anti-mainstream sentiments towards many hard-working citizens in showbiz. Why must we always envision a maniacal development girl on her cell phone shoo-ing away scripts with any class in lieu of ‘high concept’ pieces with the magic formula?

As any traveling American (or Canadian who has been mistaken for one) will tell you, it’s hard work facing stubborn opinions of our culture. The fast food, the big cars… perhaps rightfully so. But I’m starting to enjoy defending this particular cornerstone of it.

However – and I’m paranoid of sounding snobby when I use this disclaimer – I’ve worked at an international film festival for years, so I adore indies just as much (usually more). While that might give me incentive to drop the H-bomb everywhere, I usually don’t. Here’s why.

The Beauty Of Escapism

When I come out of a foreign cinema with any qualms whatsoever, I’m pelted with: “But you’re American. You just didn’t like [insert scene/actor] because it wasn’t Hollywood. It was realistic.” 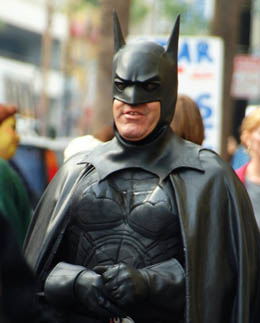 My nationality invalidates my taste, brands me with the Scarlett (Johansson) Letter. Suddenly I’m back in junior high, wondering why people are dissing my Batman slippers. Doesn’t everybody like Batman? The answer is yes, but it’s much cooler to splatter paint and write cuss words in magic marker on your Converse until you get detention. Now that’s art.

You see, movies learned to walk (and talk) during wartime. Not the kind we’ll all yell about tonight when we’re inebriated and angry about oil, but wars where college students were nurses, stockings were turned into parachutes and sailors kissed their sweethearts in Times Square.

“Going to the pictures” was escapism, because we needed and longed for it, as much as butter and paperclips. Cliché and unrealism were beautiful. In 2009, when ten seconds is too long to wait for something and we’re stuck in our idyllic suburb bubbles, now we’re longing for reality in a box.

Today, more ‘indie’ films are born daily than there are awkward clauses in a Michael Cera movie. That’s not a bad thing, as long as it’s understood that rewarding trailblazers and their minimalist mise-en-scene is not exactly world domination.

It’s evolution, and the last thing a butterfly should do is spit on a caterpillar.

You know what the real problem was? Not the bumper sticker itself, but that I’m pretty confident both its hucksters owned at least two copies of the Lord of the Rings between them.

Admit that at least a few of your favorite films had someone’s big fat wallet behind them, and that your life may be a tiny bit better for it.

If those maniacal production devils weren’t brave enough to bank on an obsessive, geeky nutcase (God bless you, Mr. Jackson), we would all be Frodo-less today, and probably Vader-less too.

Films like Star Trek, in spite of its anticipated brilliance and undeniable fun, are now out of fashion because of a lack of gritty reality or controversy, Spock’s eyebrows aside.

So come now, children, less complaining. The average moviegoer doesn’t have the stomach for The Machinist or the patience for Gus Van Sant’s occasional cinematic modern dance. They want Aniston. That’s alright.

And H-bomb-droppers still might see Tom Cruise’s movies because they’re usually good. Admit that at least a few of your favorite films had someone’s big fat wallet behind them, and that your life may be a tiny bit better for it.

Most importantly, actually start watching the films that need your support – that means paying for them, by the way. Helping an indie involves being one of its tiny statistics, not one of the moochers who appreciate it in silence.

You can’t just stare; you must put the bill in the thong if you want the stripper to feed her kids and come back tomorrow night.

The irony is amusing once you get it: some people justify their video piracy with “not financing rich execs who value profit over quality”… and yet said pirates clearly save money by sacrificing viewing quality. Hardy har-har, no?

My advice: when traveling, embrace opportunities to support foreign films in their home countries, not just the lucky films that get bought, shakily subtitled and shoved into Netflix. Also, indie means independently produced, not necessarily controversial.

Lastly, the exception proves the rule, so if you prefer the quirky exceptions, respect the mainstream rule. It’s possible to love both Parker Posey and Natalie Portman. Heck, you probably already do.

Now all I need is to fit all that on a witty bumper sticker.

What do you think of despising Hollywood? Share your thoughts in the comments!