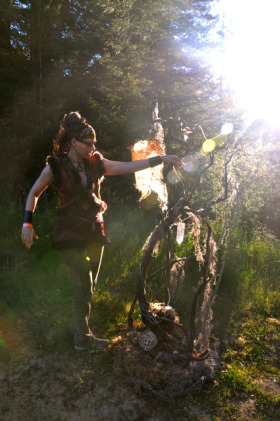 Later, as we settled around the fire, an experienced male witch invited all of us to consider the wound the earth was suffering as thousands of barrels of toxic crude oil hemorrhaged into the Gulf.

He asked us to call out our feelings. In the night air dozens of voices from around the fire cried out expressions of despair, anger, dreams, wishes, incriminations and solutions.

I called out, “Will it take a sea of change to save the seas?” We are all complicit in the wounds of the earth, some perhaps more than others. And yet she continues to heal herself and nurture us anyway.

Laura took me by the hand and guided me away from the fire to a gigantic redwood stump. We crawled up into it and laid down on a bed of soft redwood bark and needles. Looking up into the night sky, we were ringed by several redwoods that had grown up in and around the base of this fallen giant.

These newer trees, perhaps 100 to 150 years old, now towered four to five stories into the night sky. The muscle of man had cleared this particular ancient giant from the land. But the force of nature had sprouted new life out of the decay.

Over the next four mornings, we gathered around a fire pit near a bubbling creek. Each day, led by two dedicated witches, we focused on one of the four primary elements of life and magic – earth, fire, water and air. On the fifth day we focused on “Spirit” which encompasses all of these elements, the Universe and Us.

On our first day, guided by our teachers Willow and Riyana, we dozen students cast a circle after calling upon the elements. Willow then declared that we were “between the worlds, and what happens here affects all the worlds”.

We performed a ritual in which each of us wrote on a piece of paper what we wanted to purge from our lives. Then, one by one, each of us stepped forward to the fire in the center ring and cast our paper into the cleaning fire as we called out what we wanted to purge. Words such as fear, self hate, doubt, judgment, ego, and clutter were burned and dissipated into the air.

I awoke and crawled over Laura, who was curled up sleeping. I stumbled out of my motorhome and followed the stream to my open air classroom. Today we would explore the element of water.

I had always loved water – drinking water, swimming in water, bathing in water – but I’d never spent an entire morning contemplating this changeable substance that composes most of our physical being, that keeps our bodily fluids flowing and cleans us inside and out.

When I dipped my hand into this cold water and touched it to my forehead and heart, I felt its sanctity and holiness for the first time.

Willow filled a beautiful bowl full of water from the stream flowing next to us and brought it into the center of our group. She invited each of us in the circle to hold the bowl of water, make a prayer, and then pass it to the next student.

I had dipped my hands in “holy water” inside many Catholic churches as a child. But it never felt holy or sacred. But when I dipped my hand into this cold water and touched it to my forehead and heart, I felt its sanctity and holiness for the first time.

As a “recovering Catholic”, I realized that perhaps I’d thrown the baby out with the holy bath water when I completely renounced Catholicism. Deep beneath its trappings and traditions flowed rituals that were truly holy and sacred. 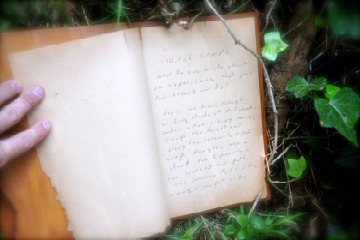 In my golden witch book “day four” is a blank sheet of old brown paper, as is day five, six and seven. Did we ponder the earth that day in class or was it the air? Weeks later as I write this story, I just don’t know. Did I get lazy and stop taking notes? Or did I become so immersed in the flow of the week that I stopped stepping outside of it to take notes?

I do recall a sensual evening towards the end of the week involving chocolate, witches, kisses, touching, music and dancing. Given that witches are fond of saying that “all acts of love and pleasure are my rituals”, this sensual night of chocolate and partying was a perfectly appropriate ritual (God, I love the way the witches worship).

I also remember drumming in the woods one night with a few sweet friends and lighting our individual candles from the same flame in our center. We shared our heart felt thoughts, hopes, fears and feelings. We bared our souls in the dim light of our candles and then we extinguished the flame together.

I also recall an amazing talent show one night, filled with music, comedy and dramatic performance art. This showcase of magical and amazing talent was followed by an auction to fund scholarships for witches to attend the next year’s camp.

Beyond all the details of what occurred that week in the woods, I’m left with a profound sense that we are all stirring the pot and combining the elements of fire, water, air, earth and spirit to make magic in our inner and outer worlds. So what magic are you cooking up?

What do you think about the rituals and ideas followed by Witches? Share your thoughts below.

Vermont’s Northeast Kingdom is its own universe, hidden deep in nature

Voluntourism in paradise: 5 incredible opportunities to give back on Maui

7 underrated Smithsonian museums, galleries, and gardens you should visit in DC

Build your epic Colorado and Utah road trip with this flight, hotel, and car rental bundle