The final day of filming the Afghan National Women’s Cycling Team for the upcoming film Afghan Cycles became an unexpected culmination of my own years of biking in Afghanistan.

Afghan Cycles director and fellow Matador Ambassador Sarah Menzies and I met up with the coach and drove outside of Kabul for the team to start their ride. Heavily loaded Pakistani trucks thundered by as bikes were readied and the coach spoke to the women. The esteemed Afghan photographer, and my friend, Farzana Wahidy was joining the team to document for her upcoming book about Afghan women, a project she’s been working on for several years.

As on previous training rides with the team, it was with great apprehension that we watched them pull out onto the highway. Men stared at the girls from all directions, cars honked, trucks swerved around each other in typical Afghan mayhem. The girls seemed so vulnerable on their skinny tires entering the fray. Dust swirled, and the wind gusts challenged them to hold a line. We all felt a sense of heavy responsibility as they pedaled off.

Time for a gut check: They weren’t doing this for us. This was their training ground, and for them, these risk were ones they faced every ride. But it still put us on edge. With a big gulp, we jumped into the car so Sarah and Farzana could film the ride. 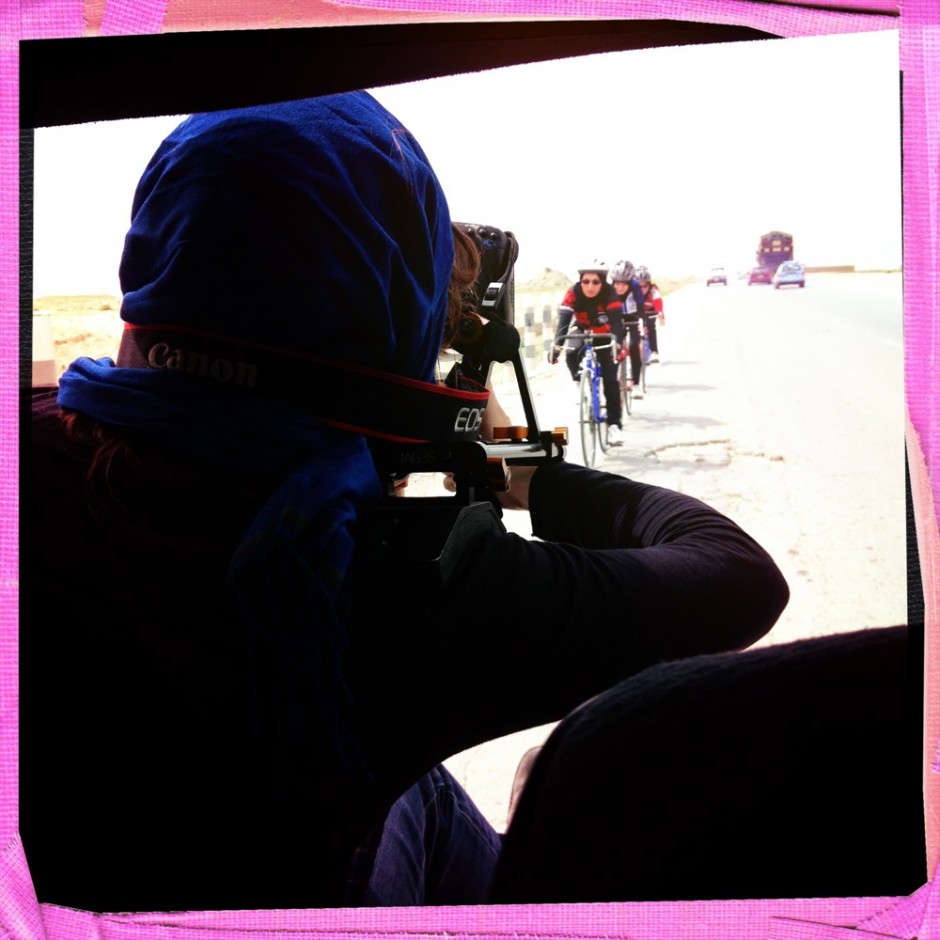 As if to add one more element of risk to an already heavily risk-laden trip, Sarah was going to shoot out of the open back of the Corolla hatchback. I knelt backwards to wrap my arms around her waist and keep her in, wishing we had thought of bringing some straps or bungees. Trusting in our steadfast driver, Mohammad, I held on tight, Sarah filmed, dust swirled each time trucks passed in the opposite direction, and we kept up steady communication with Najibullah and Mohammad, while Farzana shot out the side window.

After 30km or so, we pulled off onto a side road that went back towards the mountains. It was empty and all of us, even the girls, breathed a sigh of relief. We spent several hours filming in relative peace, with the team stopping for specific shots we couldn’t get from a moving car. During a water break, the girls sat down and Coach challenged me to a short race. I hadn’t planned on riding this trip, so I was wearing ripped jeans under my long skirt and tunic and my trusty Dansko clogs — but I am always up for a ride. Since we were isolated from the main road, I didn’t worry about my headscarf or helmet and grabbed Massouma’s bike while she rested. Luckily I’m used to standing on my singlespeed at home, because when I sat down my knees were nearly in my armpits, the seat was so low. I stood up and easily cranked along, catching up to Coach much to his obvious surprise.

An hour later, Sarah wanted to get closer to the mountains and scout a shot. When we pointed it out, the tired team got into the car to drive up the hill. I grabbed Coach’s bike, donated earlier on the trip by our team ‘mechanic,’ Ky.

“Okay, Shannon, we race?” he asked with a smile.

Uh, hell yes! Nazifa declined the car ride up and joined us, riding strong despite her small size. Even Sarah and Najib got on the bikes as we assembled the ‘B team.’ The four of us rode straight towards the hills, while Mohammad drove the team up ahead of us. I struggled to keep my feet on the spd pedals in my clogs, but happily climbed out of the saddle behind Coach. Nazifa was right behind, but starting to tire in the heat, as she’d already been riding for a couple of hours. Looking behind, Sarah and Najib were a ways back, and eventually I turned to check near the top to see the little figure of Najib in the distance, walking his bike. 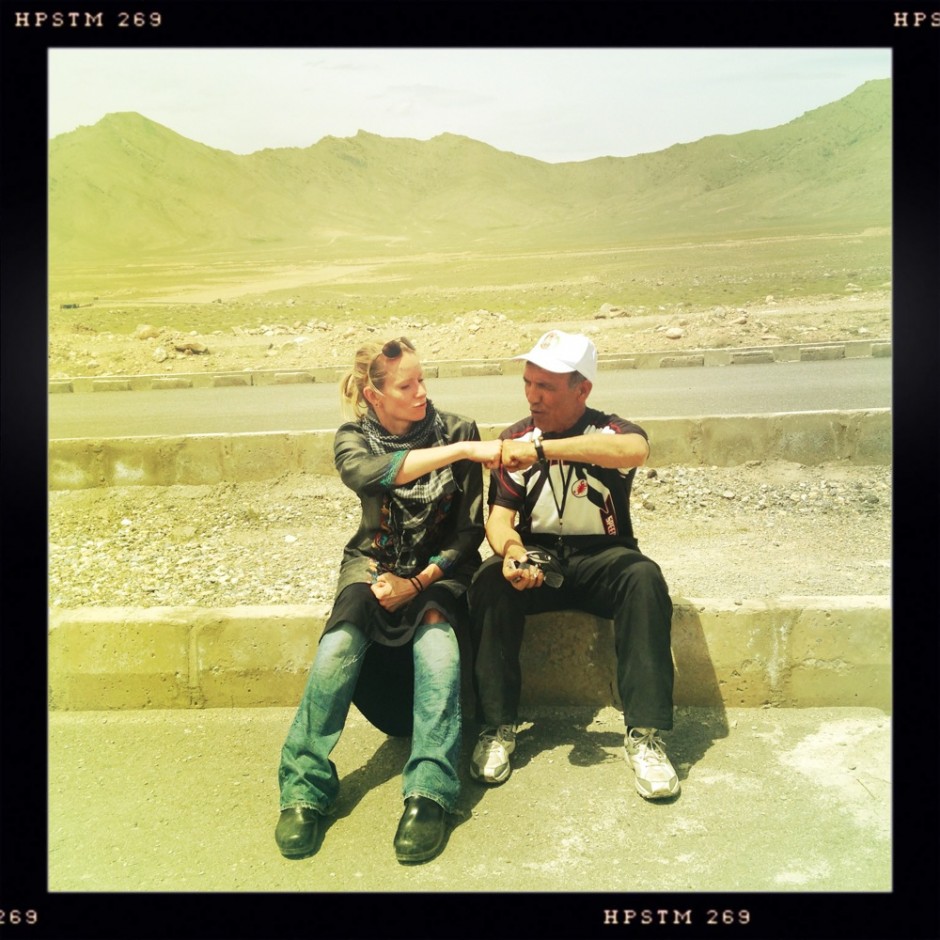 Coach and I stopped at the top and walked down to cheer on Sarah and Nazifa, who needed water, and to learn how to shift gears. She was slowly grinding her way up on her smallest ring. Unintentionally, I realized. I turned, and laughingly pointed towards Najib and asked Mohammad to go pick him up and save him a long, hot walk. Meanwhile, Coach and I sat down to rest, and I taught him how to fist bump.

Sarah continued her scout and decided that our final shot would be near the bottom of the road where a group of mostly destroyed mud houses stood off in a field. I told Coach he could drive down with Sarah in the car, and I stole his bike with a smile so I could sneak in some ride time off-camera with the girls. This is the stuff that most worries me when the girls ride, the downhills — their bikes have little to no braking power.

Massouma, one of the newer and most unskilled riders, worryingly tends to get to a manageable speed and then drag her feet. That could explain why she was riding with a cast on one hand. There are a myriad of things these girls need, and basic handling skills, steel bikes with good brakes, and shifting lessons are at the top of the list. Courage, they’ve got. Determination, too. A few water cages wouldn’t go amiss either, so they don’t have to wait for Coach to stop his car and pass out plastic water bottles.

Regardless of their lack of stopping power, the girls didn’t hold back — they were riding as fast as I dared with no helmet on and we cruised down, wind in our faces, smiling and laughing. It marked the first time in the four years of riding in Afghanistan that I had the opportunity to ride with girls.

As Afghan Parliamentarian and activist Fawzia Koofi said in our last interview of the trip, “The time has come to stop referring to Afghan women as ‘poor Afghan women,’ that changes nothing. It is time to start calling them ‘strong Afghan women.’ Because that’s the only way to change the perception of Afghan women, and encourage them to succeed.”

These girls are pedaling a revolution — they just don’t realize it, because they’re too busy having fun! 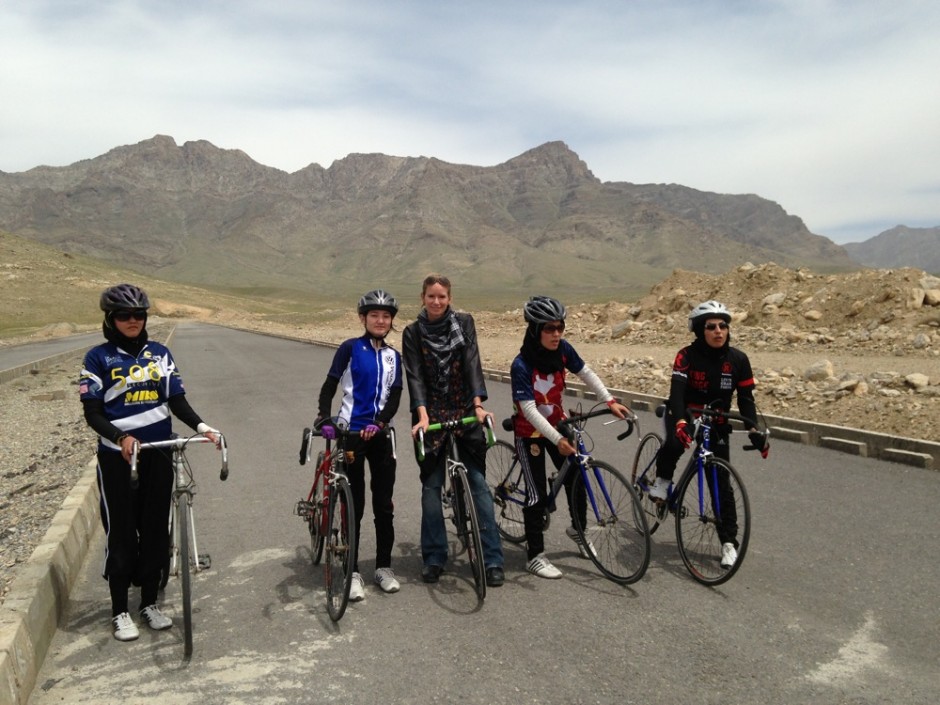 Tagged
Cycling Afghanistan Ambassadors
What did you think of this story?
Meh
Good
Awesome
✖
travelstoke
Download the mobile app
stoked by