The bell began to ring in rapid succession, marking the day’s first church service. Mama Aka, one of the few elderly women on Palmerston Island, led the congregation into a polyphonic hymn, sung in Cook Islands Maori. Her voice was harrowing as it traveled through the pre-dawn light and ricocheted around the rusty, corrugated steel walls of our island abode: an open room with four beds and a concrete floor, which housed our seven-person research team and all of our supplies for the month. I gradually awoke, fumbled for the opening in my mosquito net, and tiptoed my way past friends who managed to sleep through the joyous crescendo of the local men singing “heyyyyy-yah-HEY!”

It was Wednesday, day 10 of 30. The local islanders were devout Christians. Church services also happened on Friday mornings and three times on Sunday, a day of strictly enforced quietude where no working, playing, or even swimming was allowed. 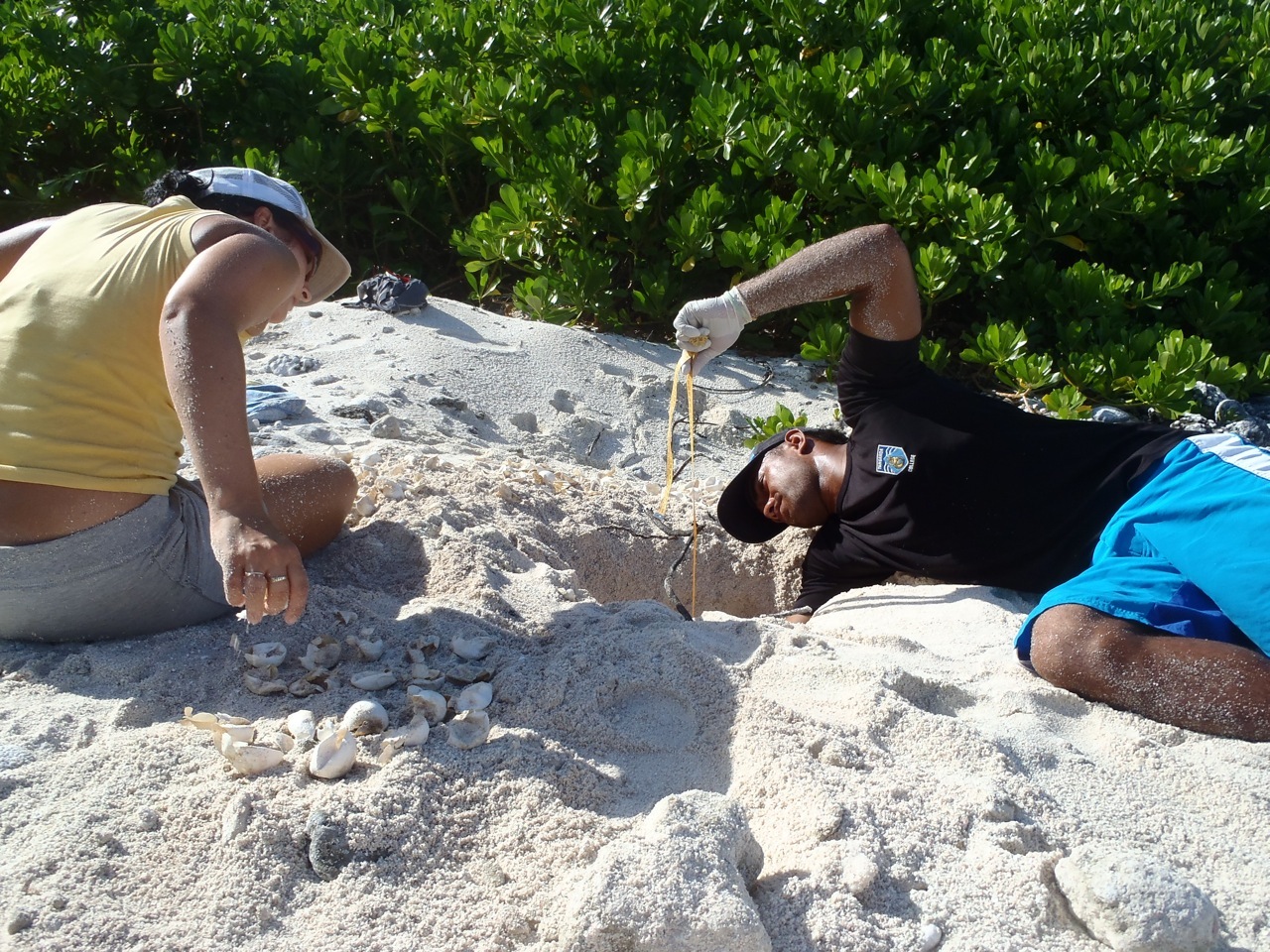 It had rained hard last night and I wondered how Tina, a photographer and coral reef biologist who I lived with back on Rarotonga, fared in her hammock under the ramshackle gazebo near the water. Crossing the wet, cardboard footpath which connected our sleeping quarters to the kitchen, through the remains of the far wall I saw our Chief Scientist sitting quietly near a coconut palm, the steam from his instant coffee getting lost in his long, grey beard. He was always the first one up.

With the morning sun beginning to cast pink blankets over the raked, white sand that surrounded us, the gentle humming of the generator could be heard in the distance. The island had a limited diesel supply and could only afford power for 6-10 hours per day, just enough to keep food from spoiling if doors were kept tightly shut during off hours. It had been nine months since the last cargo ship and many of the men, having run out of razors long ago, had the facial hair to prove it. Luckily, the next ship was due in just a week’s time. The rest of the group began to stir, and with our duties now fairly well defined, we inhaled our breakfast, slathered on sunscreen, and readied our gear for another day searching for sea turtles in the piercing heat of the South Pacific sun.

We pushed off while the sun was still low to allow David, one of our local research assistants, to spot the large coral heads — or “bommies,” as they’re called in this part of the world — with ample time to avoid running the aluminum boat aground. A few coconuts bobbed along in our wake. We sputtered slowly toward Tom’s Island, whose uninhabited beaches we would be surveying this morning for sea turtle tracks or other signs of their nesting. If any nests were found, we’d mark them with a GPS, a branch, and a piece of duct tape from the roll which now lived around my bicep. The oldest ones would be excavated to help us calculate success rates. 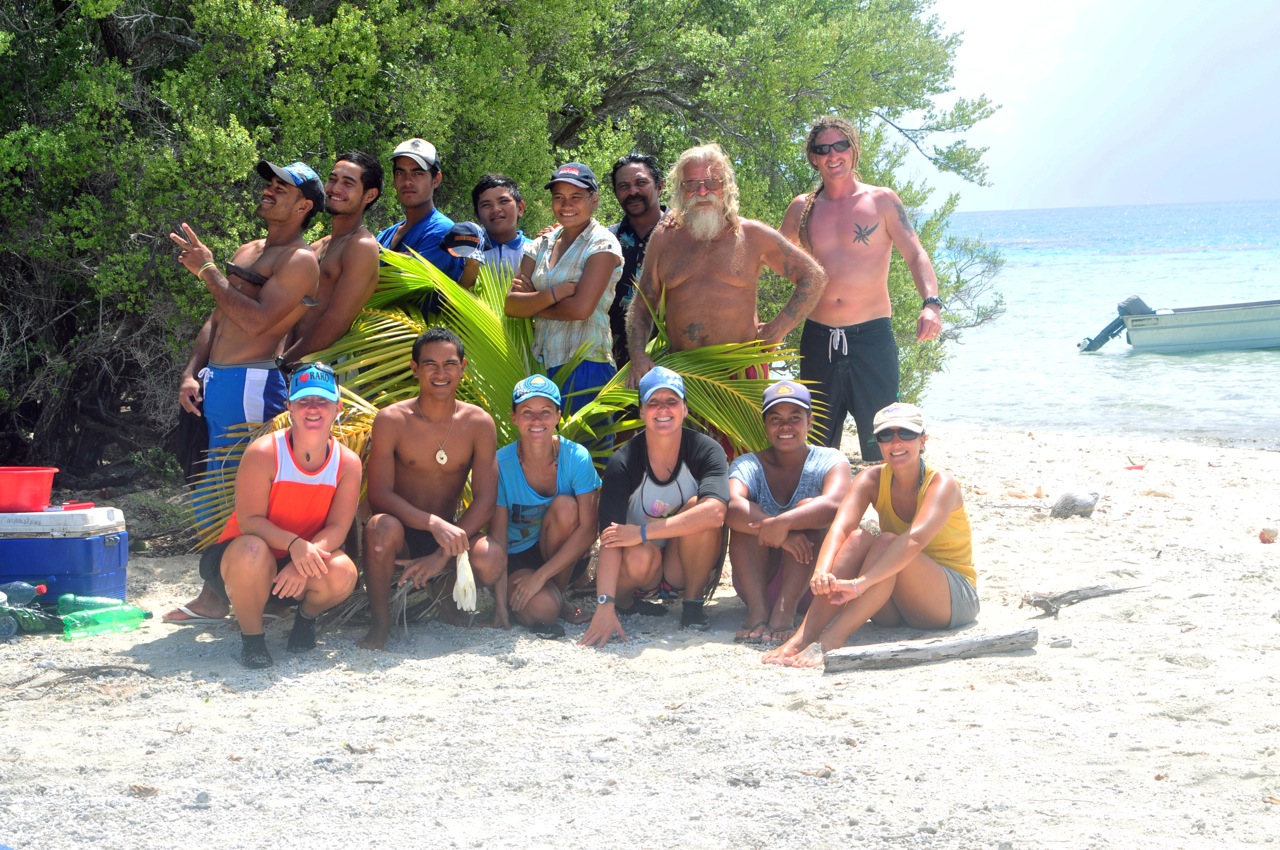 The color of the lagoon changed from turquoise to purple-blue as we passed through deeper water. “Turtle!” yelled Jason, our bearded Kiwi captain who took a month vacation from his teaching duties to participate in the expedition and sequester himself on this remote atoll with three American water-women, two British turtle fanatics, and a pretty Australian lass who was wearing a sequined top today, but loved the dirty work of opening rotted, unhatched turtle eggs. He quickly put the engine at idle, and as quietly as possible we floated on the glassy lagoon, observing the creature, whose head was poking out for a breath.

We could tell by the rounded shape of its beak that it was a green sea turtle, but before we could discern other identifying characteristics, like the presence of a tail or any notches or marks on its shell, or carapace, it ducked underwater.

After four hours of circumnavigating the high tide line of Tom’s motu, traipsing through the mid-island swamp-stream in the morning sun and digging through coarse sand and broken pieces of coral until our fingernails bled, it was time for lunch. We met the other half of our group near the boat, compared notes, and decided that today, it would be more comfortable to eat while sitting in the shallows of the lagoon, rather than near the densely packed palm and pandanus trees, where armies of hungry mosquitoes awaited a fresh feed.

The work was tiring and the daytime meals simple: fresh-baked bread (or dense cement loaf, depending on who had baking duty the previous day), jam, peanut butter, marmite, and a piece of parrot fish or two left over from last night. We felt really lucky to still have a few oranges to share from a special care package sent by our teammate Kelly’s fiancé, and aboard our aluminum boat we had some extra bottles of water and a ration of artificial mango flavoring. Meant for one bottle, we shared it between four. The water was warm but hydrating, and nevertheless satisfying.

While our skin begged for the respite of a few moments of shade, our spirits continued to bolster, not just from the billion shades of blue that lay before us, but because we had successfully uncovered two baby turtles — or hatchlings — that had become lodged in the compacted sand while trying to make their break for the sea. Their 80-odd brothers and sisters hatched days before, and without us, we thought, they would certainly have died before having the chance to dodge fish, birds, and other predators as newbies in the big blue Pacific.

During lunch in the lazy lagoon, we learned to laugh out our jitters for the afternoon activity, the in-water surveys. Although the environment was pristine, teeming with fish and the healthiest coral I’d ever seen, the hearty population of grey reef sharks, who always seemed to get a little too close, caused a tremble or two. We paired up at first in twos and then in threes to snorkel large sections searching for turtles. But in our state of heightened awareness we wondered, who was more curious, them or us? 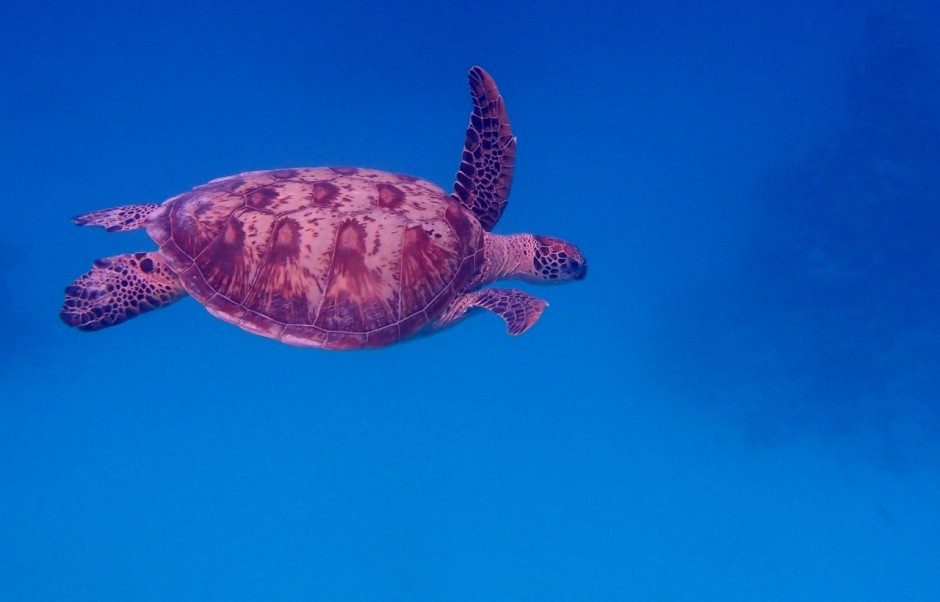 A healthy female green sea turtle swam quickly away as she spotted us. 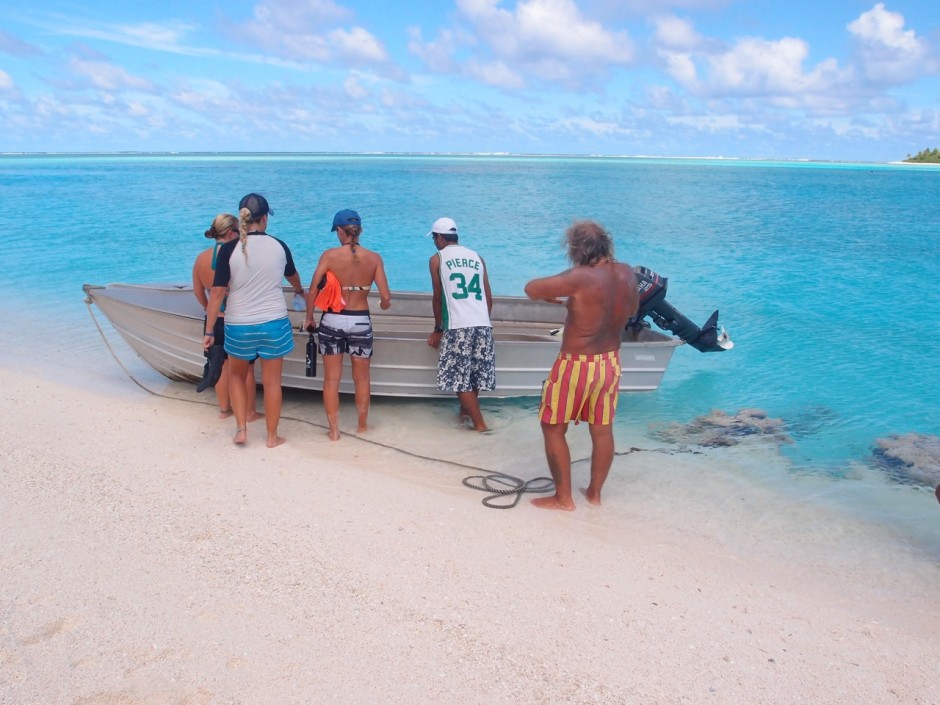 Our team readying the boat for a trip to one of the smaller motu. 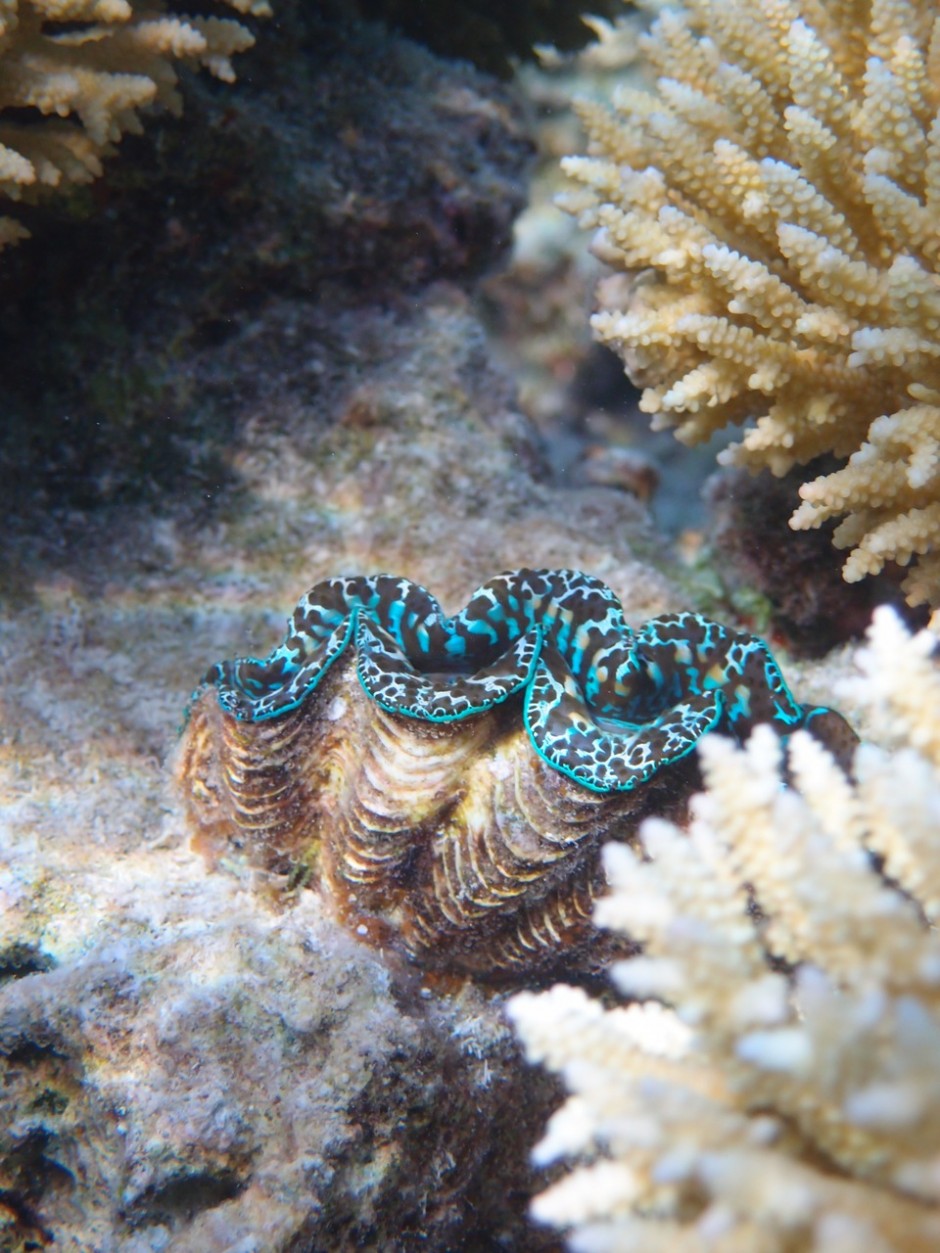 These gorgeous giant clams, or paua, are the sign of a healthy lagoon. Cook Islanders harvest a fair number of paua, causing island-wide seasonal bans. 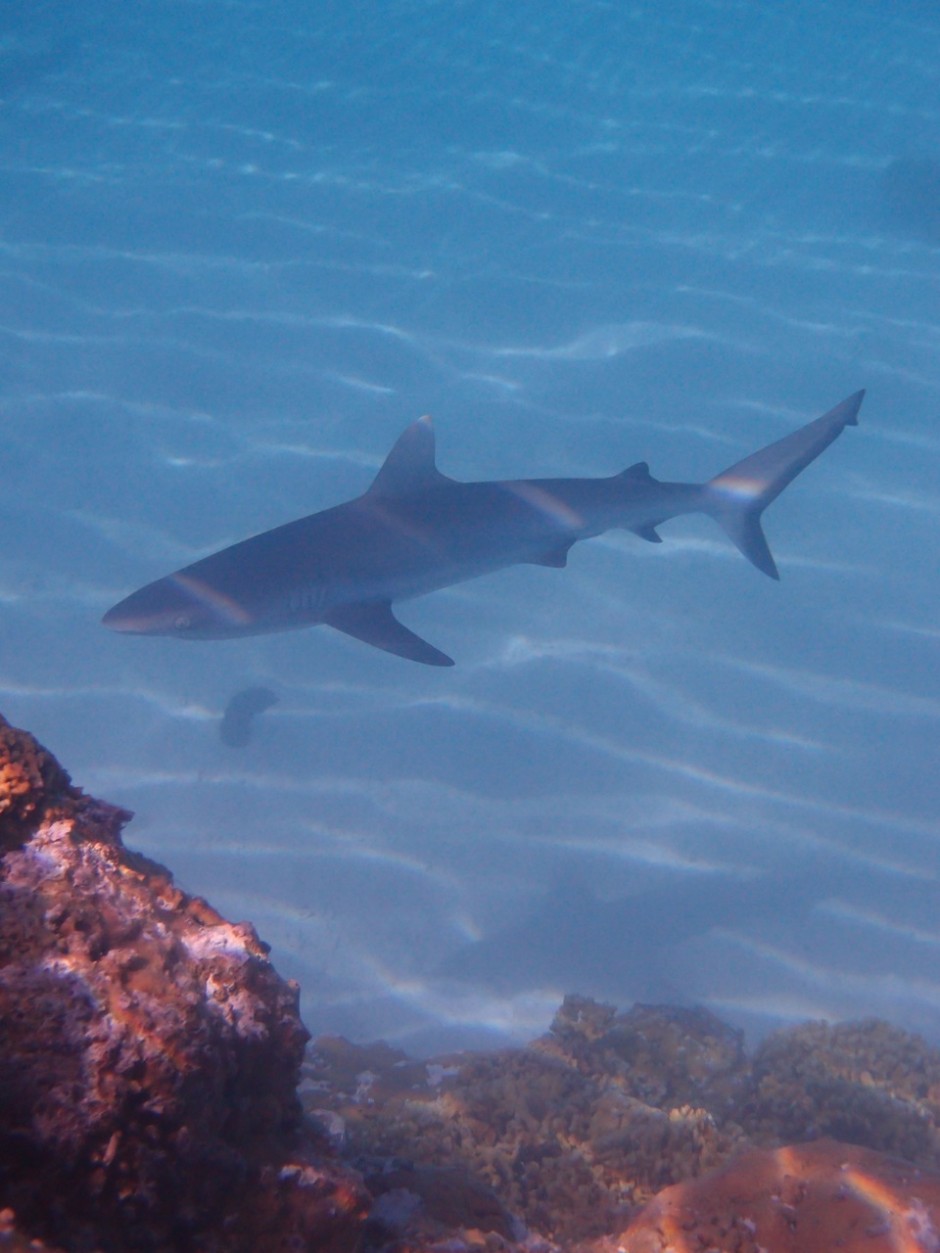 Hovering above a coral bommie, we calmly wait while this grey reef shark curiously circles us. The hearty population of grey reef sharks, who always seemed to get a little too close when we were diving, certainly caused a tremble or two amongst the team. 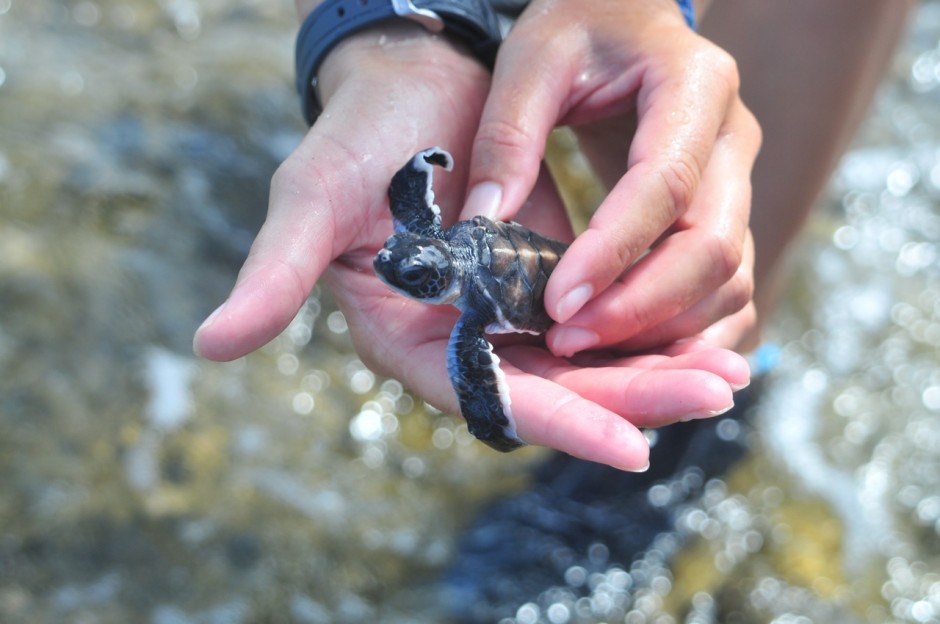 Kelly, uncovering her first green sea turtle hatchling, identifiable by the white rim around its shell, reluctantly prepares for its release. 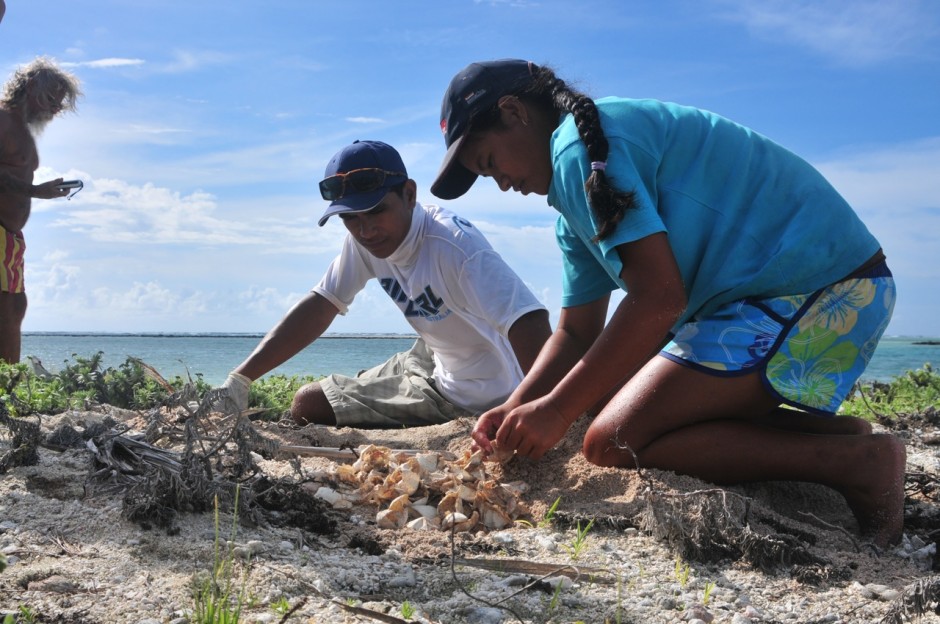 Two of our local researchers dig into a turtle nest excavation like old pros. Goldeen is counting turtle eggshells. 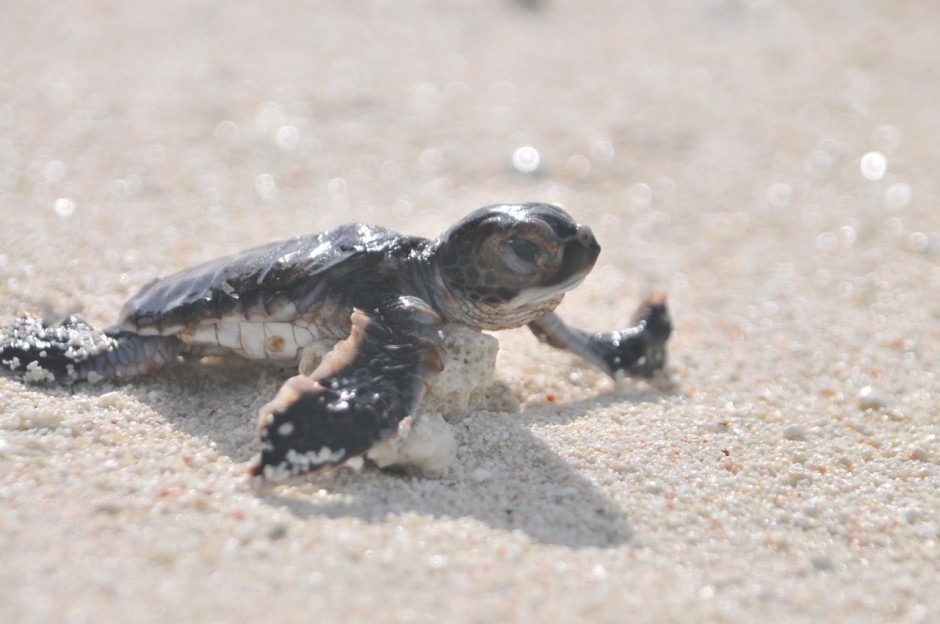 This baby hatchling was found during an excavation and scurried its way to the sea, but not without struggle. 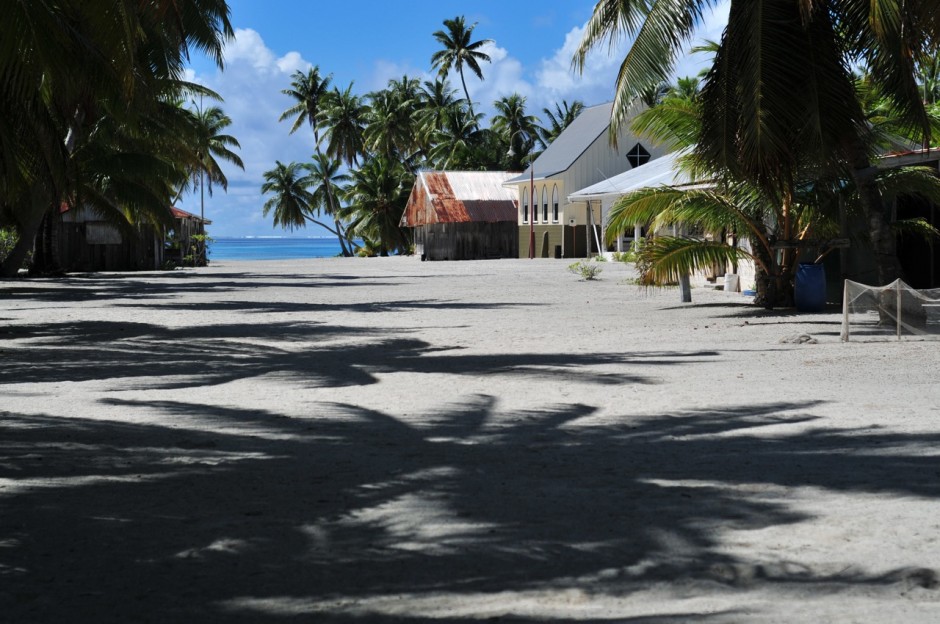 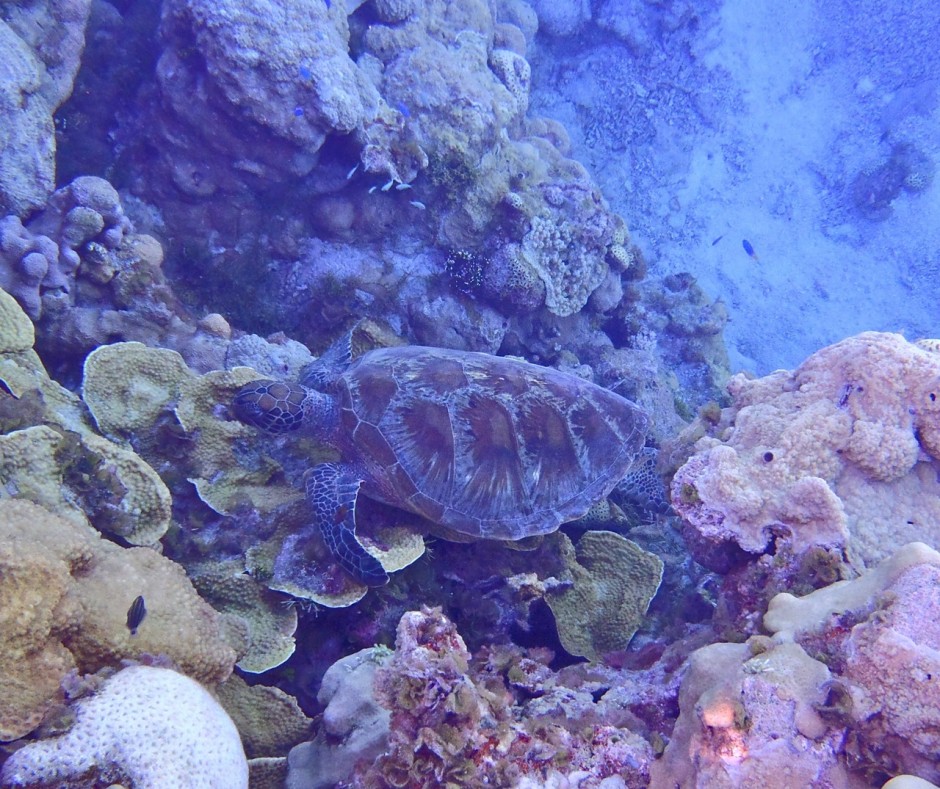 A green sea turtle resting on the coral as we carefully move closer to photograph any unique, identifying characteristics. 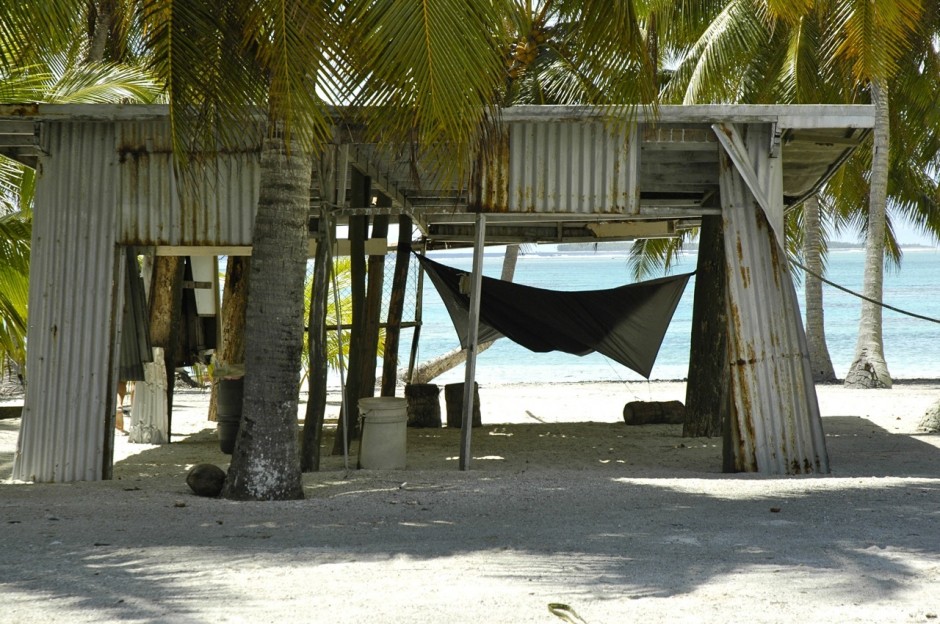 Where we spent many hours hiding from the sun...and escaping the ever-present danger of falling coconuts. 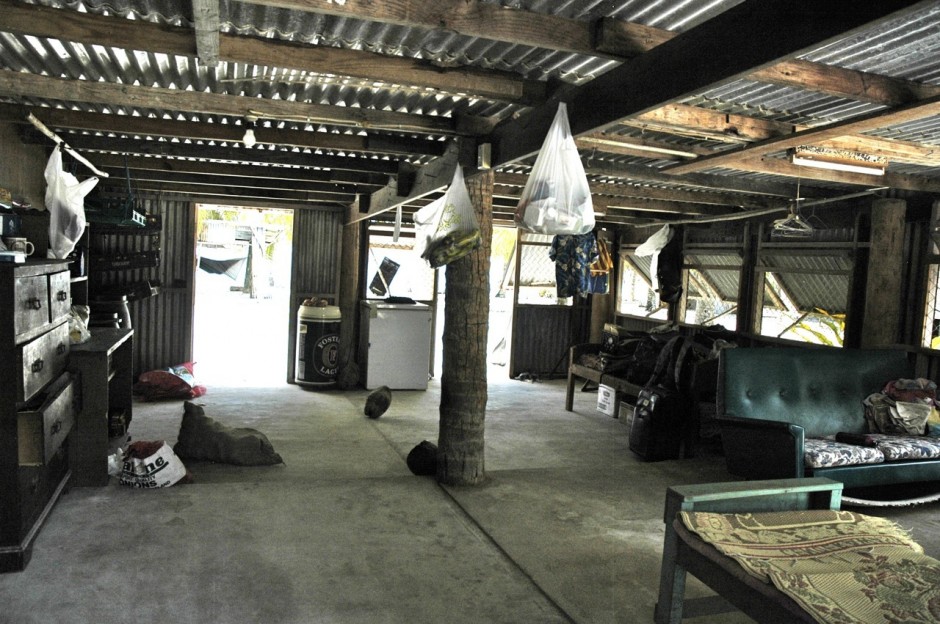 The inside of our sleeping quarters before the mosquito nets were set around our beds. 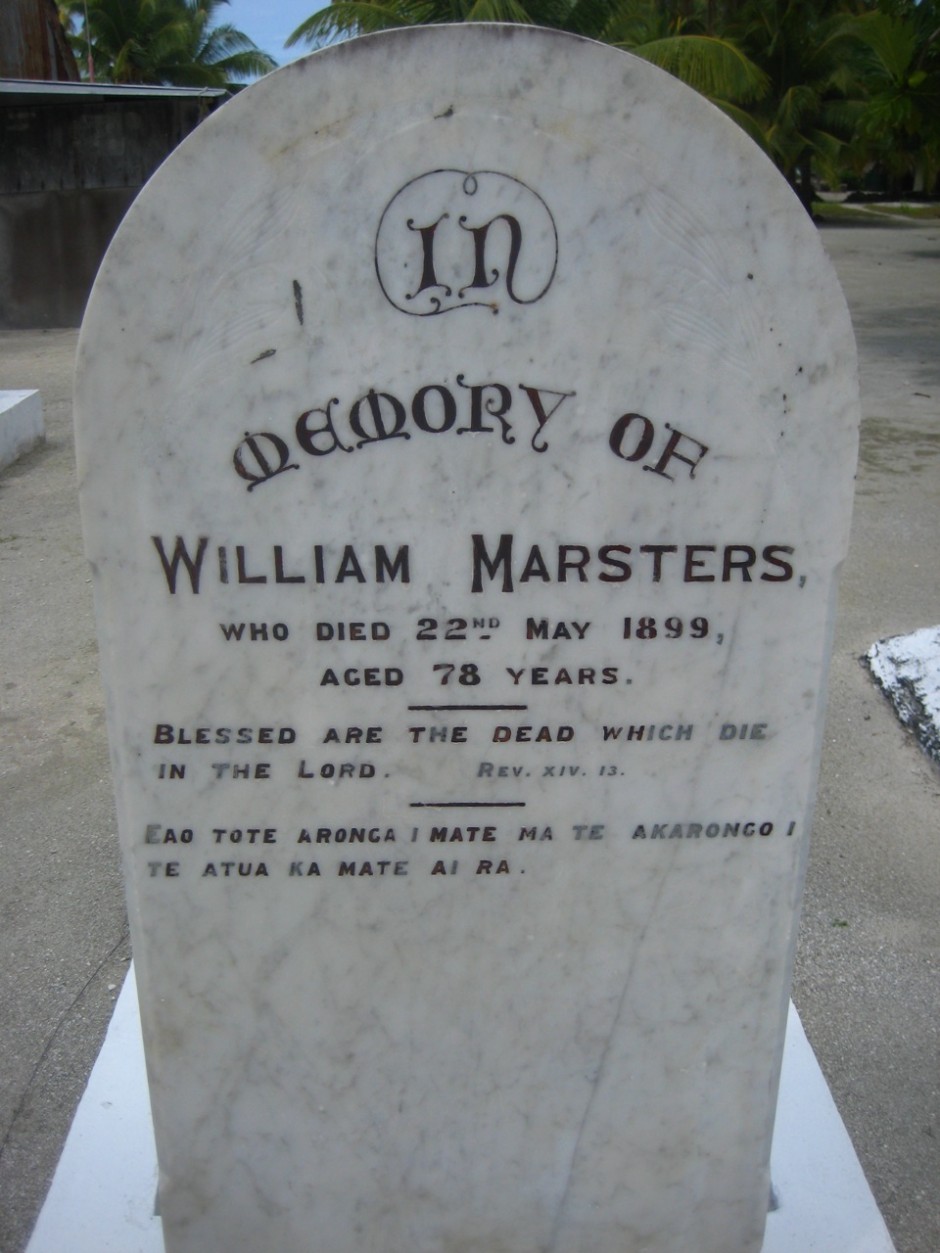 The headstone of the man who settled on Palmerston with his three Polynesian wives and created a legacy that remains today. 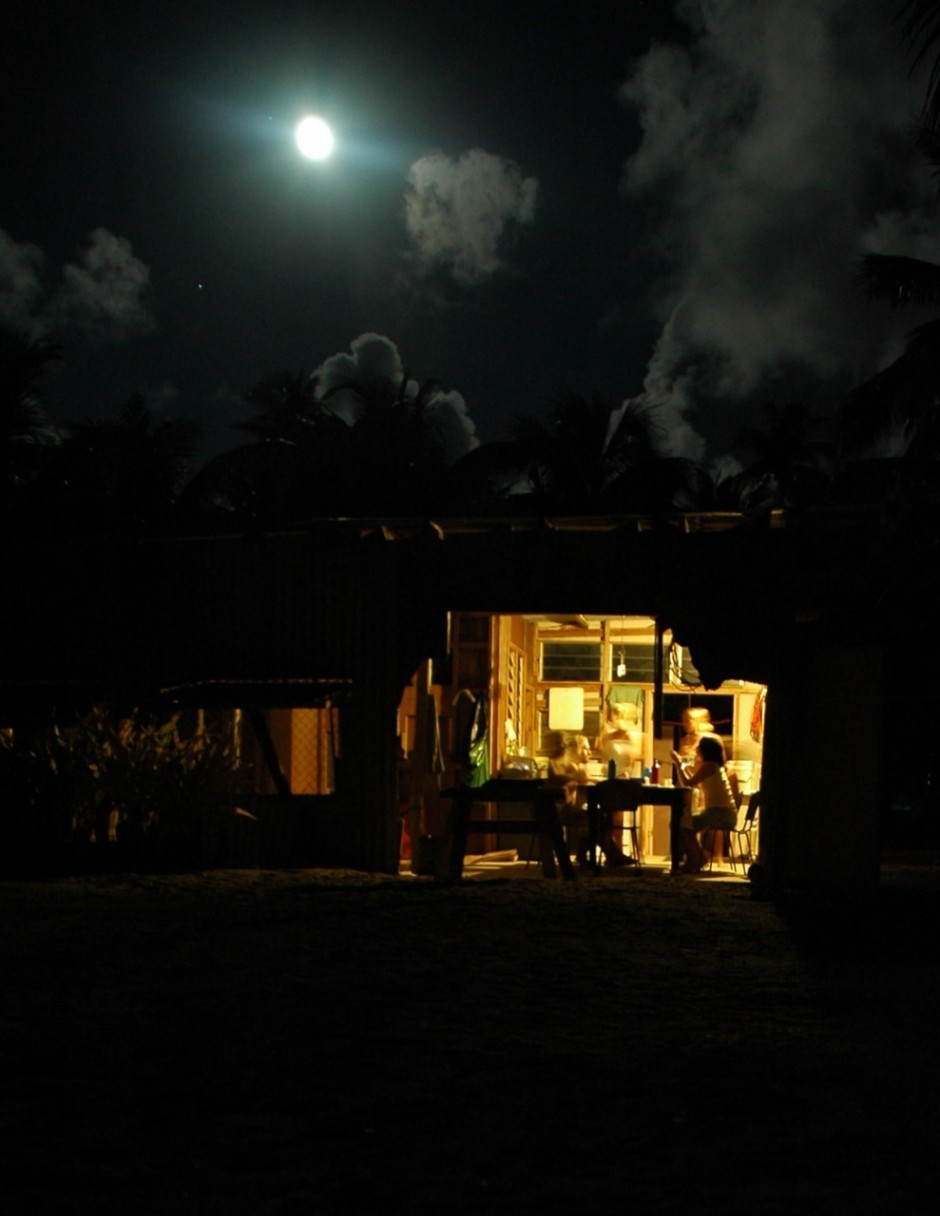 The view of our kitchen, where we spent many hours preparing meals using fresh coconut cream, local fish, and homemade bread. 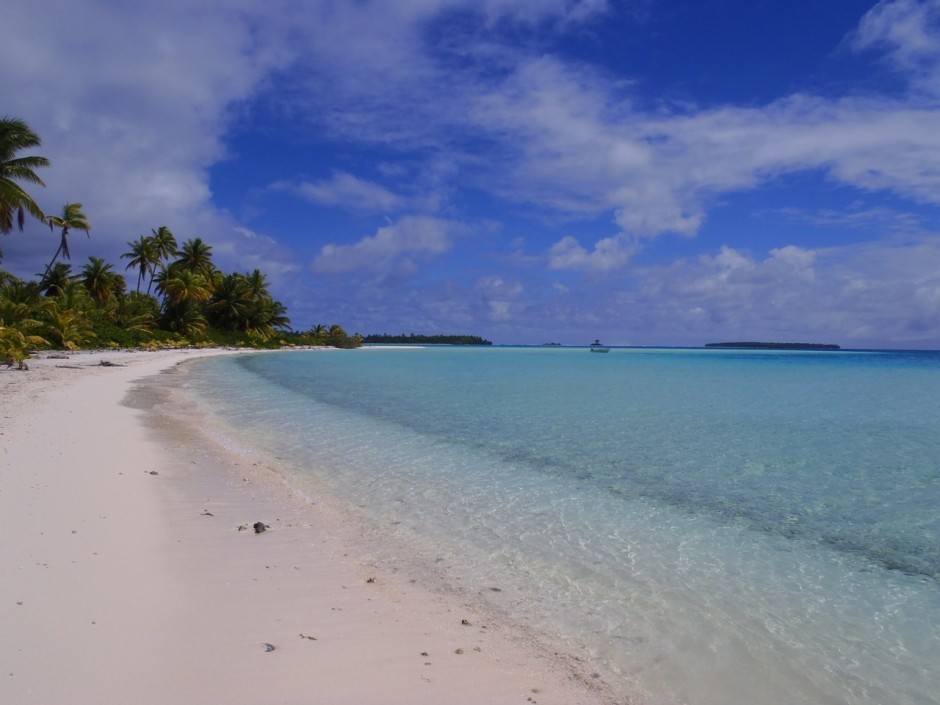 The north side of Tom's motu where we washed up after a long in-water survey searching for turtles and swimming with sharks. 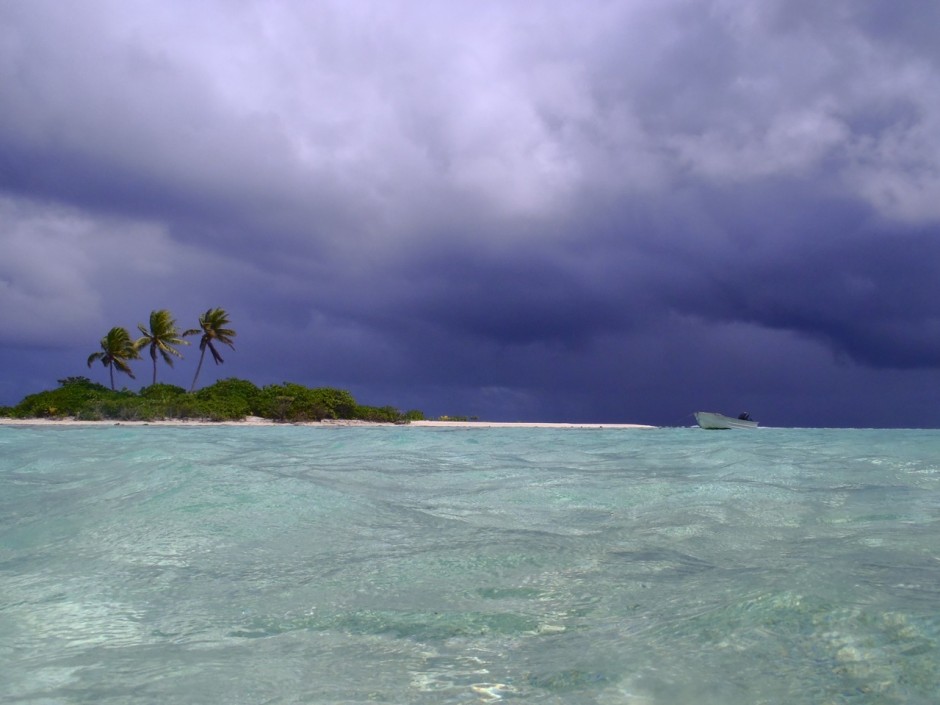 With the highest point on the atoll at just above 3 meters, storms such as this were easy to spot, but of course, unavoidable. 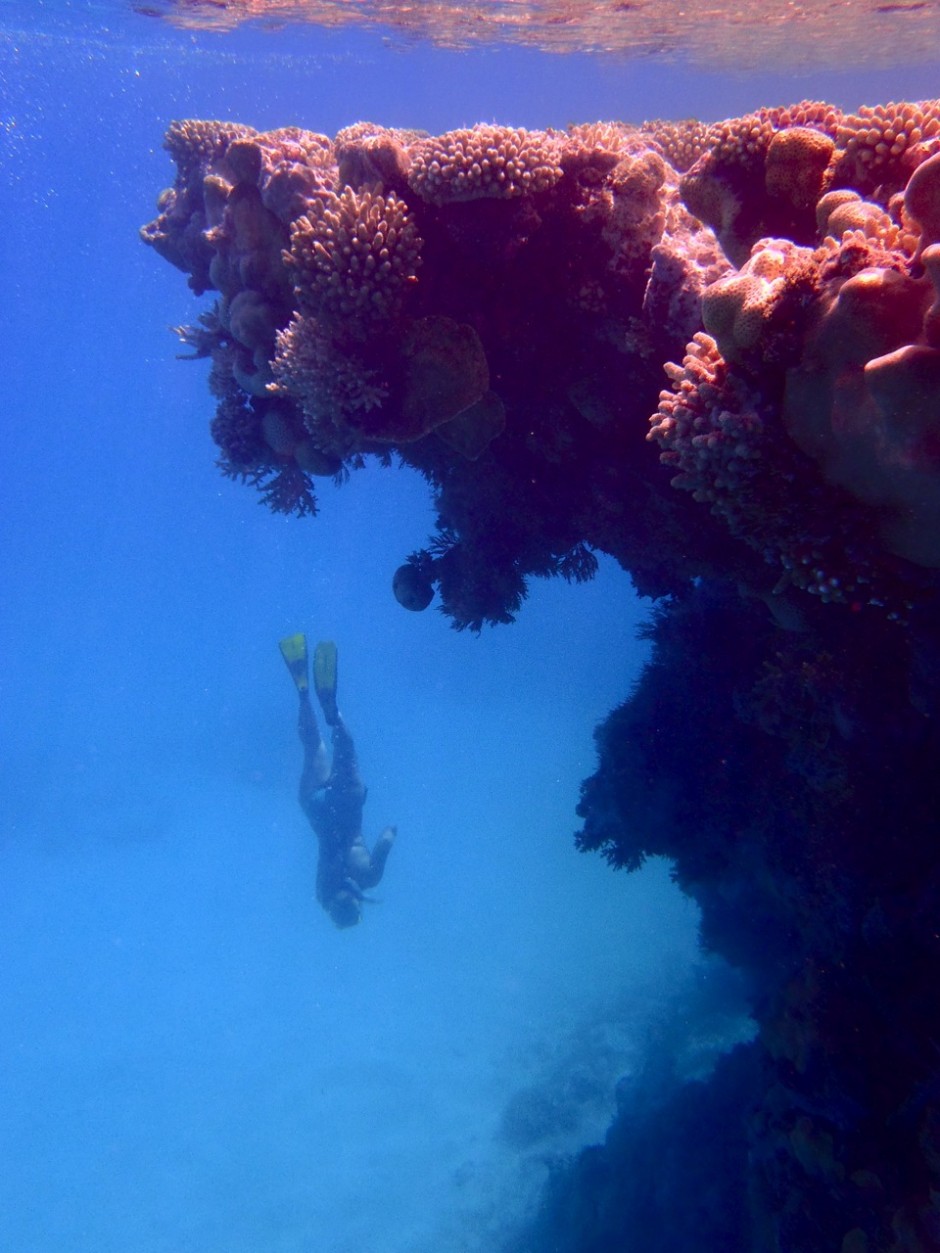 Tina Weier, our coral reef biologist, diving down to search for any turtles on this coral bommie.