The name “Iran” alone may lead many in the West to imagine an enraged mob on the streets of Tehran, chanting scary slogans about America, Britain, or Israel. But this is an out of date view of a changing country. Recently, Britain reopened it’s embassy in Tehran, and with it an announcement came that “Iran is safe for travel” (with the exception of border areas, particularly with Iraq and Pakistan).

I couldn’t help but smile when reading that Iran is even set to be a “destination” for the upcoming 2016 year on some travel lists.

I smile because I traveled there in May 2010. I had gone to find out for myself exactly what Iran was like — despite all the poor coverage at the time — and to speak with people who had lived through the widely-reported protests of the previous year. I used Couchsurfing to arrange host families all over the country, then armed with a notebook and camera, I took the train from Istanbul to Tehran.

I did not find a chanting mob on each street corner, primed to tear me limb from limb. Instead, over the course of a month, I sought out encounters with people of vastly different backgrounds and beliefs, none of whom said they felt animosity towards western people.

On one end, I met the highest-ranking Shi’ite cleric of the city of Tabriz, after he sent a translator to my train compartment to “request an audience” with me. He was the archetypal Iranian fundamentalist to look at — turban, gigantic frame, and bushy beard — yet he had nothing but a warm welcome for me, curiosity about where I was from and questions about what brought me to Iran. To this day I have his home address and telephone number, should I ever need it. At the other end of the spectrum, I met scores of good-humored university students who took me under their wing, spoke candidly about their lives and showed me a wonderful time taking tea, laughing on patios under the late afternoon sun, eating dolma or kebab.

Here’s a glimpse into one of the best months of my life, in Iran – a place I felt welcomed, safe, cared for, and befriended. 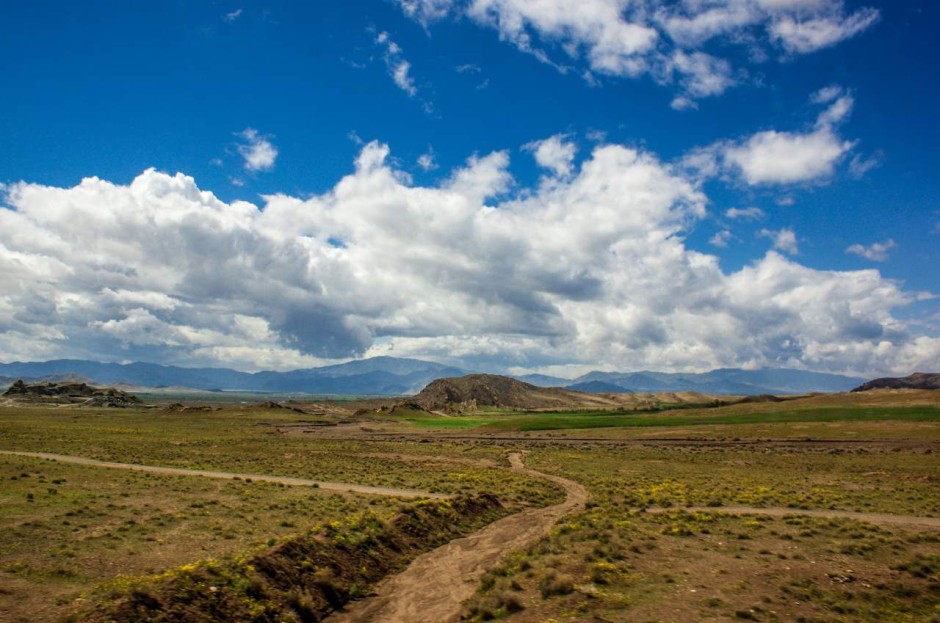 The wild open steppe of Iran’s West Azerbaijan Province met my eyes from the train after crossing over the border with Turkey. I steadied myself against the window frame and drank in the view. In a country many assume (wrongly) to be all desert, the variety of scenery is staggering. There are ski resorts, forested mountain ranges, and beach resorts in the Persian Gulf. 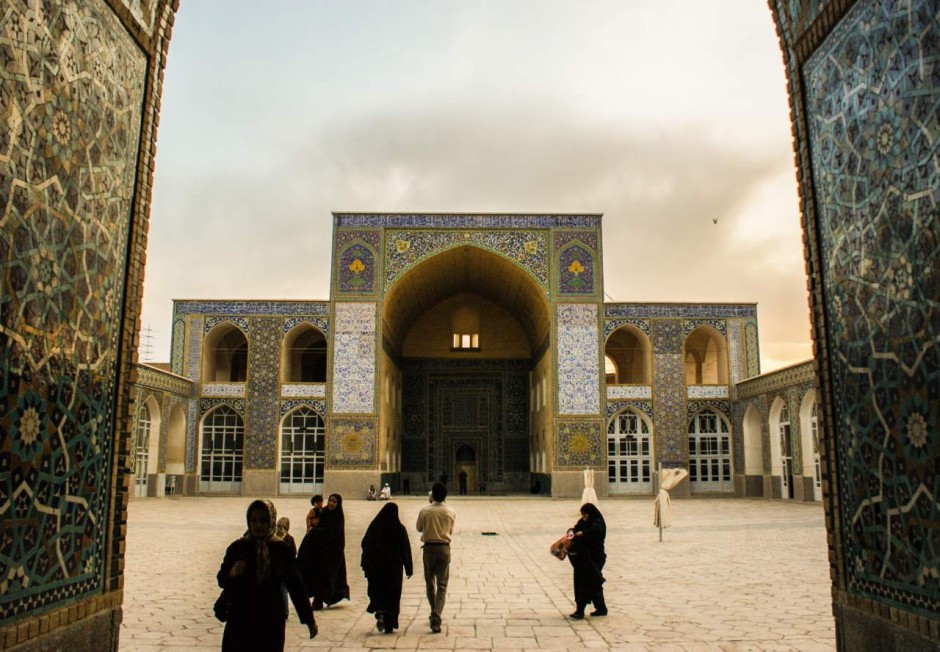 Entrance to a mosque in Kerman, Southeast Iran

From its northwest corner to its south-east, Iran possesses a bounty of beautiful Islamic architecture. I found that I was able to move unhindered in and out of these grand buildings, taking unobtrusive pictures and interacting with visitors. 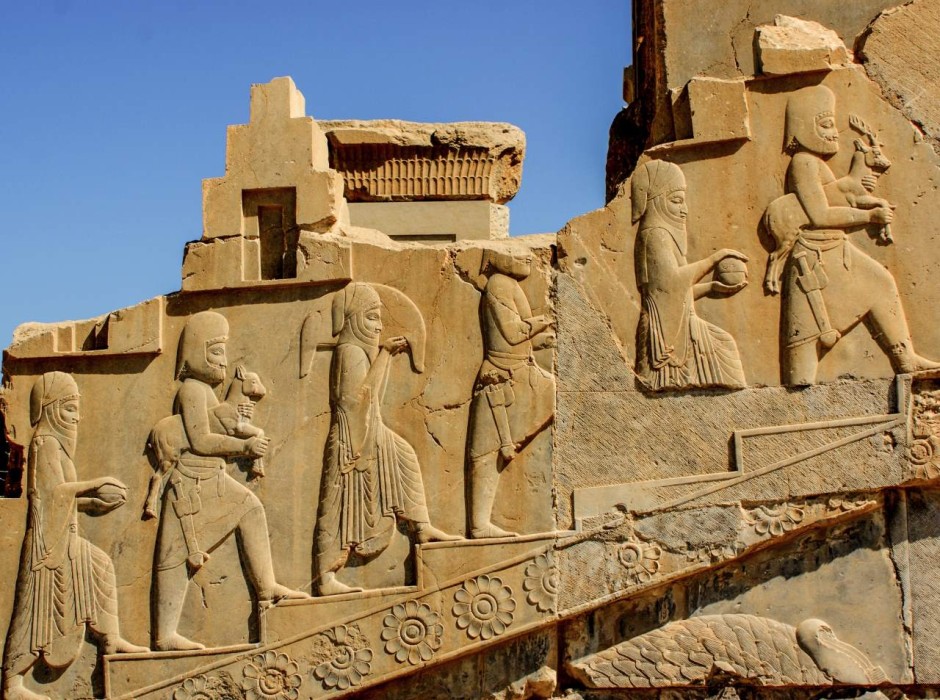 At Persepolis, the ancient capital of the Achaemenid Empire, frieze carvings depict offerings being brought before Cyrus the Great by tributary states. This was the first Persian Empire, which began in 550 BC. In Iran, I genuinely got the sense of a strong culture that had developed over thousands of years. Some social concepts, such as Taarof, were alien to me.Taarof is a mind-bending ritualized system of hospitality and etiquette. One element involves when things are offered; they should not be accepted immediately. They should instead be refused at least three times. If it is still offered, the offer can be deemed genuine. By refusing, the person offering has the chance to appear generous, even if they have nothing to give. I did my best to employ Taarof, such as when a man in a neighborhood shop told me that my big bag of groceries was free. I tried ten times to press money into his hands, going well beyond Taarof’s call of duty, but each time he refused. To him, I was a guest in his country. 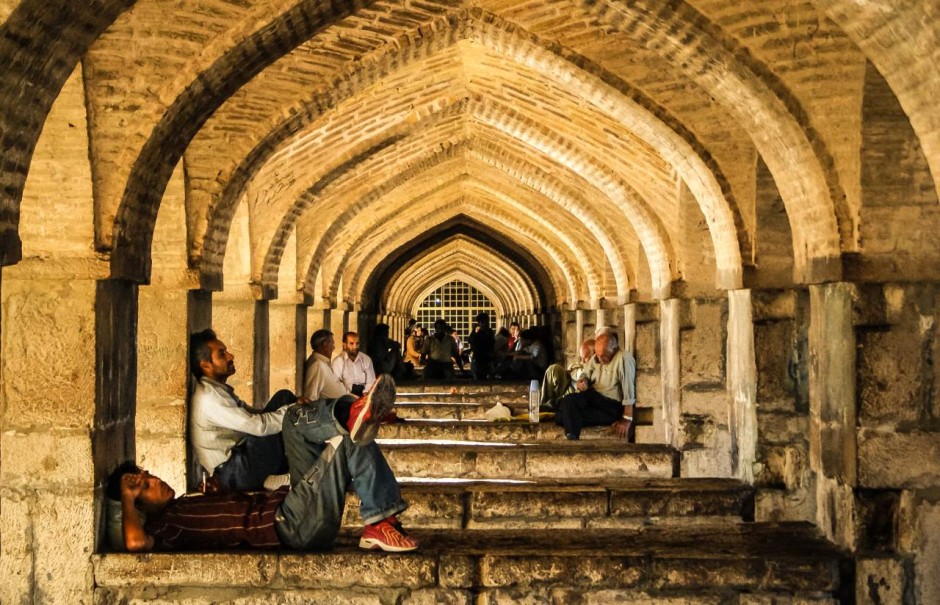 To have been to Esfahan is to have seen half of the world, or so the old Persian proverb goes. The shady arches beneath Khaju Bridge make for the ideal venue to escape from the baking midday sun - if you’re male and aged over forty-five, it would seem. There’s no escaping the fact that Iran is a male-orientated society, where places such as traditional tea houses are male-only. I saw plenty of underground cafes, restaurants and shisha smoking joints where young people of the opposite sex mixed freely, however. 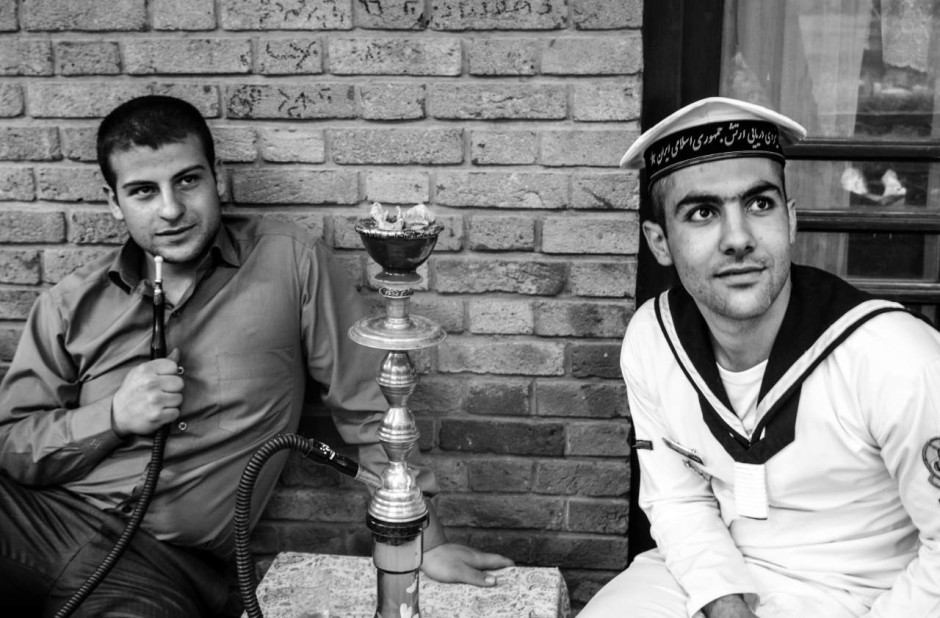 “Do you like Iranian girls?” I hadn’t been in the country for long when I met these two sailors, so I was unsure how to answer their question. What was proper? I decided to play it safe by saying “I like all girls." They found this to be an acceptable answer. 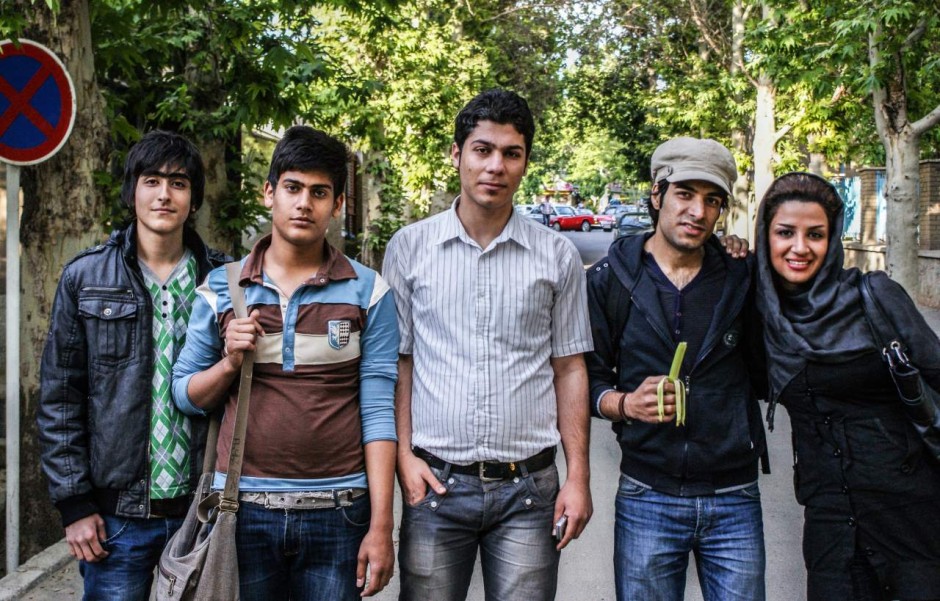 My Iranian friends. Maryam (far right) and Iman (second from right) wanted to get married and move into their own place, but money just wouldn’t allow it for the time being. They were both working long hours in Tehran to make ends meet, but living in Karaj – a city 20km to the west of Tehran. Iman worked as an English teacher at a private university. I was an English teacher too, so one day I took over his lesson unannounced. His students couldn’t believe it; a real-life English person. I received so many invitations to their homes that I couldn’t possibly accept them all. 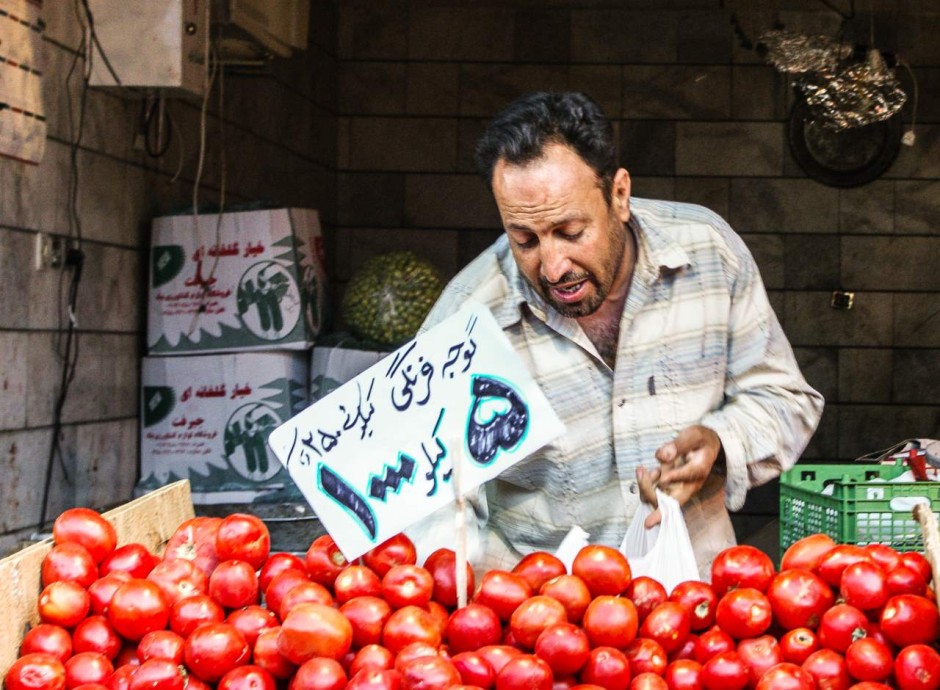 A fruit and vegetable seller shouts about his tomatoes in Kerman Bazaar. Mentioning that I was traveling to Kerman drew negative reactions from Iranians. Its proximity to the border with Afghanistan’s Kandahar province means the area has a darker association. Drugs. In Afghanistan, the hump of a live camel is sliced open, hollowed out, filled up with opium and stitched back together. It’s then sent packing across the desert border in the direction of Kerman, where it’s hoped that it will be intercepted by the next link in the chain and not the army. From what I gathered, I was likely to expire at the sweaty hands of an addict. In reality, Kerman was where I felt safest out of anywhere in Iran, because I was taken into the warm embrace of a family home. An engineer named Ali and his relatives were supposed to host me for three days, but I ended up staying for eight. 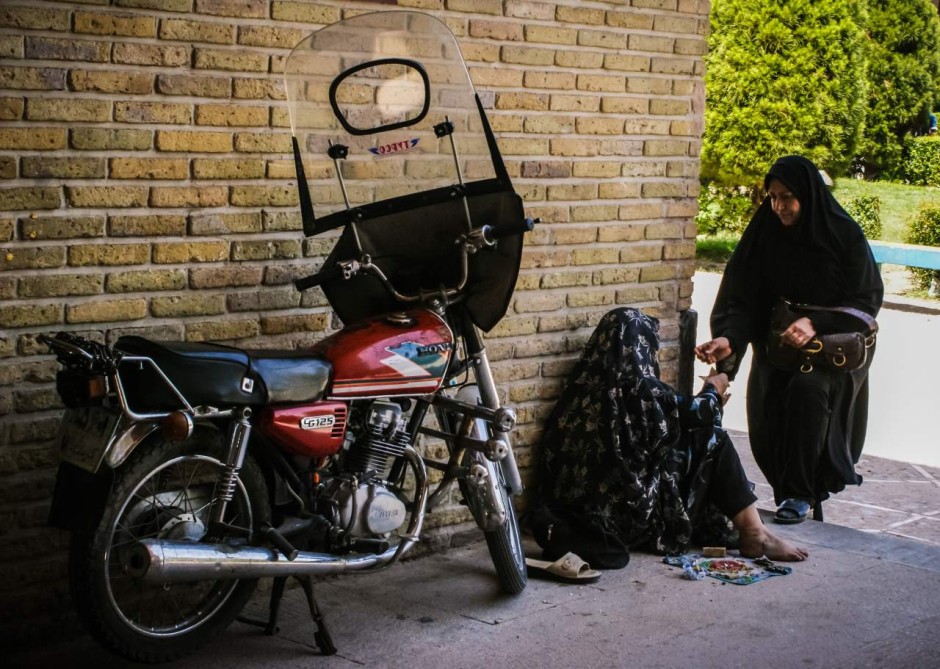 A random act of kindness in Kerman

A random act of kindness occurs in Kerman Bazaar, as money changes hands between women. As a solo male traveler, I couldn’t get to know a lot of the women I met very well. Societal norms don’t allow for it. One woman I did spend a great deal of time with though was Mama Sara. Mother of Ali - she was the old lady of the family that hosted me in Kerman. For eight days, she treated me like a member of her family, tried to set me up with eligible brides, caused me to gain weight by feeding me non-stop, and cried her eyes out when it was time for me to leave. 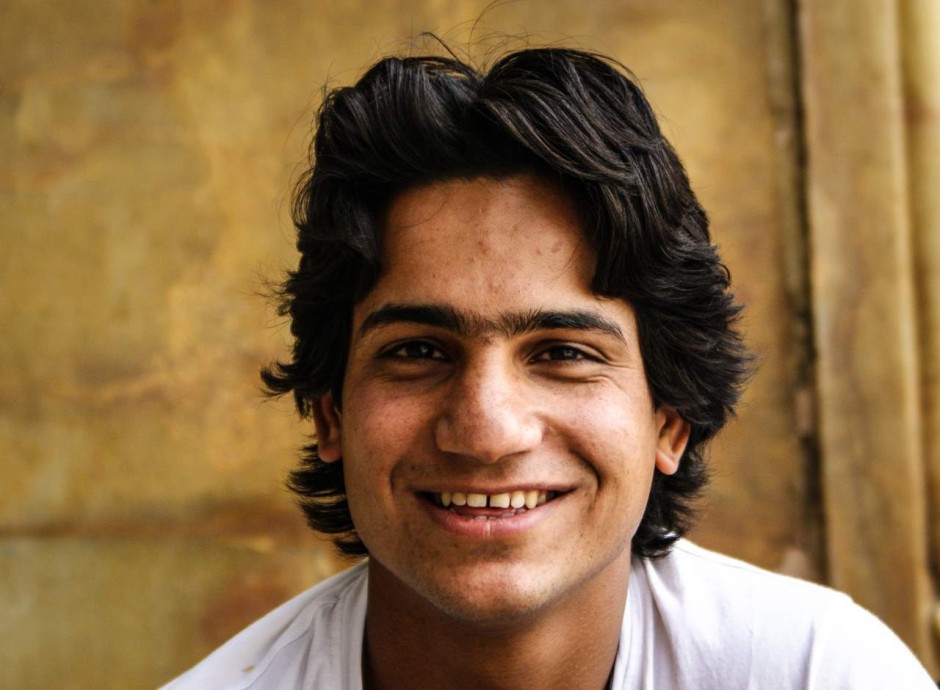 Hanif, a salesman in Esfahan bazaar, let me lounge around in his shop while I waited for my Couchsurfing host to show up. We talked about how seemingly different our lives were over glasses of strong black tea. I was single and had a backpack by my side containing my worldly belongings, whereas he had a wife, two children and a business. We could hardly believe that we were both twenty-four. And yet, over a cup of tea, it felt like we weren't that different after all. 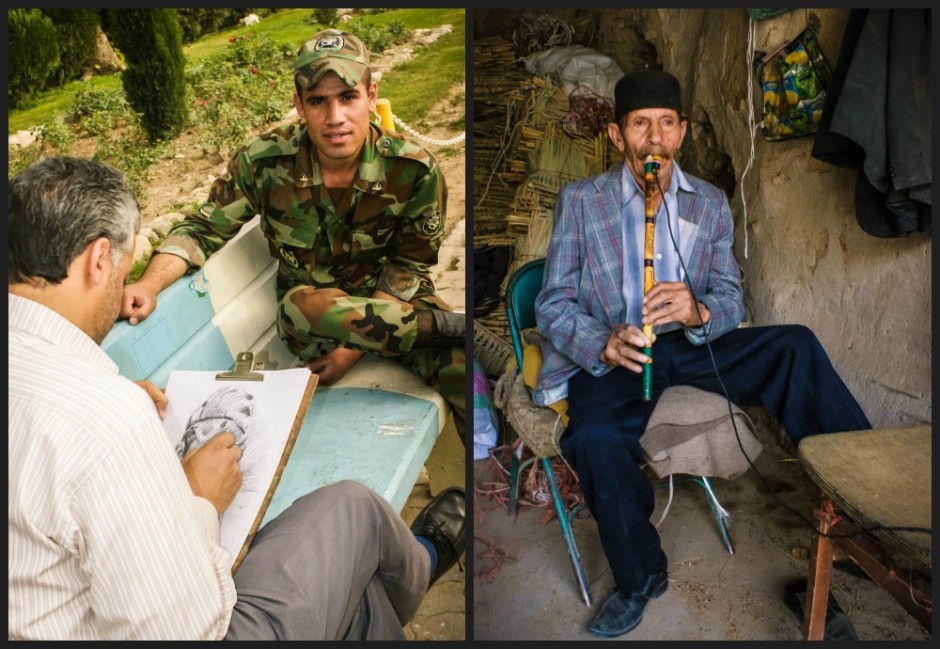 Locals are often open to having their picture taken, but they appreciated being asked for permission to be sought beforehand (as people generally do, everywhere). I employed extra caution when photographing women there, and was careful of what buildings I pointed my lens at - these are touchier subjects when it comes to a camera. 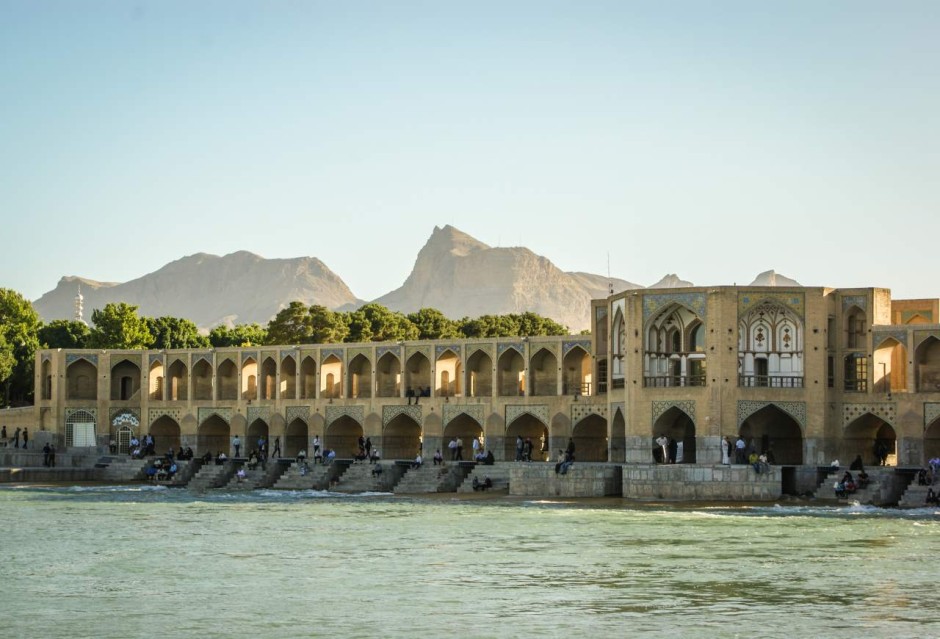 Khaju Bridge was built around the year 1650 by Persian king Shah Abbas II. It has been described by art experts as the pinnacle of Persian bridge architecture. While the twenty-four arches underneath are used by older men to sit, sleep and talk the day away, the steps on the river are popular for another reason - youthful interactions. 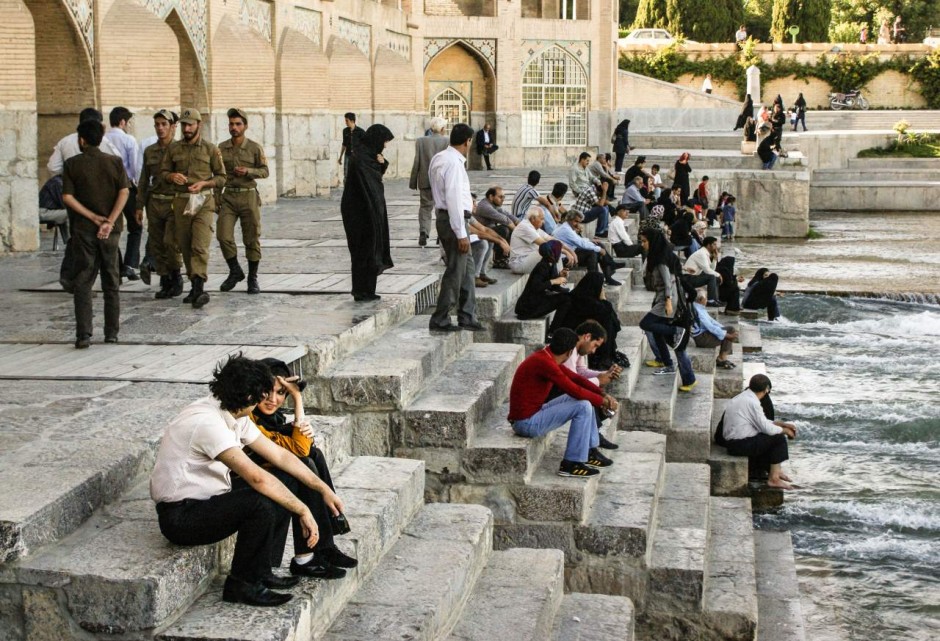 The steps on the river are the preferred spot in town for local young people to meet for a date without being disturbed. The Iranian government’s interpretation of Sharia law means that unmarried members of the opposite sex should not be seen out together in public. The bridge provides the advantage of being able to see who’s coming in each direction. 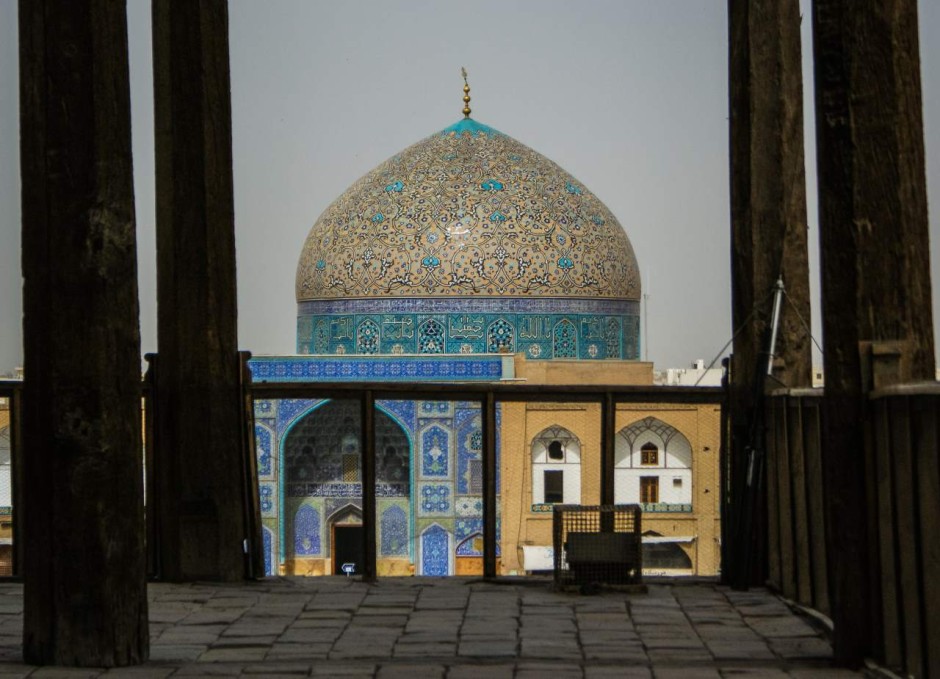 Many years before the Islamic Revolution of 1979, the Shah of Iran would have sat on this balcony overlooking Naqsh-e Jahan Square to watch polo matches. These days, once the sun starts to set, the fountains in the square are turned on and the manicured lawns fill up with families and picnic hampers. 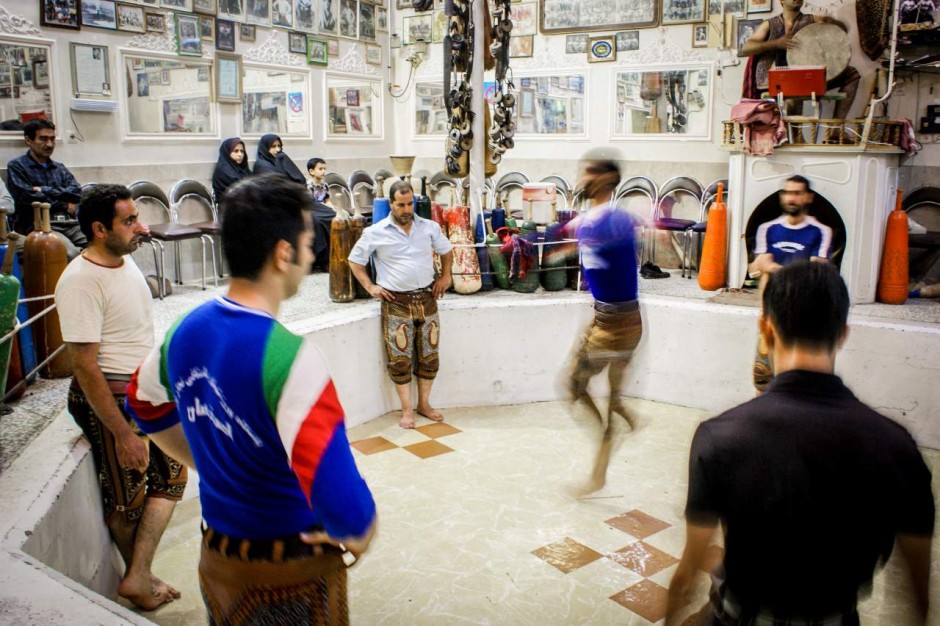 Zurkhaneh’ (the House of Strength), Esfahan

In the back streets of a residential area of Esfahan, grunts and chants emanate in unison from an unassuming doorway with no signage. This is Zurkhaneh – the House of Strength – an ancient Persian ritual exercise that predates Islam, but has evolved since to incorporate prayer. I witnessed this Sufi-like spinning, which demonstrates the more mystical side of Shia Islam. I also saw a test of strength in which participants lift heavy weights from flush to their chest, over their shoulders and down their backs, then back again. I was invited to try it later and found it to be impossible. 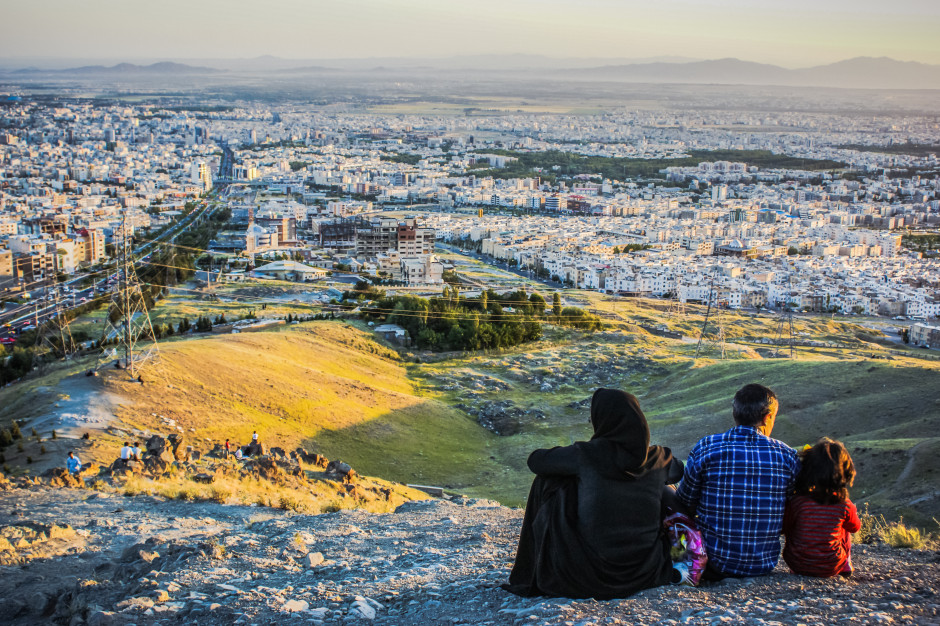 Traveling to Iran caused me to feel strongly all across the board. The beauty of the landscapes is extraordinary, the friendships I made became tight in a short space of time, the traffic is intense and without doubt the biggest – and very real – danger I faced, and just as with any intense, month-long relationship, I couldn’t help but feel lost and slightly heartbroken when it was all over.Ali, my host in Kerman, said it best. After dinner one night, we were talking about how Iran is portrayed by the Western media. Clearly upset, Ali leapt into the air. “This is not a dangerous country of terrorists. This is a great country. This is Persia!” A lone tear streamed down his cheek as if to punctuate his remarks.

Tagged
Travel Safety Iran
What did you think of this story?
Meh
Good
Awesome