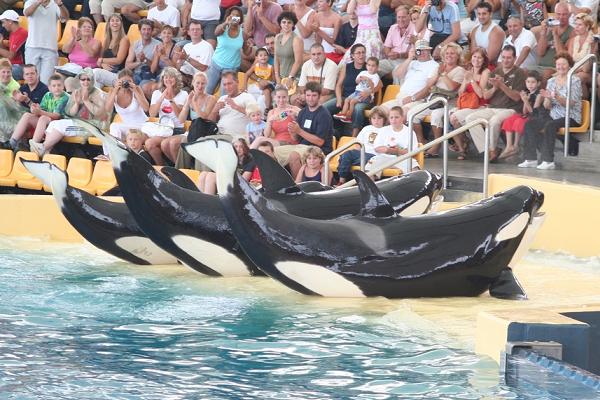 After the Oscar hubbub about “The Cove” and the death of a SeaWorld trainer in Florida, Sara Benson looks at how travelers vote with their dollars when it comes to animal welfare at home and abroad.

It was one of those awkward moments during this year’s Academy Awards.

When the Oscar for Best Documentary was awarded to “The Cove,” political activist Ric O’Barry (who starred in the film) held up a sign: ‘Text Dolphin to 44144.’ Suddenly, the orchestra started playing, and everyone was hustled off stage.

Did the Academy somehow miss the point of the winning movie it picked? “The Cove” is about guerrilla activism, specifically to prompt change in our thinking about marine mammals, both in captivity and the wild.

Cultural Traditions vs. A Lucrative Business

After training captured wild dolphins for the popular 1960s TV series Flipper, O’Barry later renounced keeping marine mammals such as dolphins and whales in captivity (read more about his process of disillusionment).

“The Cove” focuses on O’Barry’s efforts to turn the world’s attention to the fishing village of Taiji, Japan, where dolphins are rounded up for capture each year, then offered for sale to dolphin trainers or slaughtered for their meat.

In response to “The Cove’s” Oscar, the town of Taiji issued a statement: “It is important to respect and understand regional food cultures, which are based on traditions with long histories.”

Many travelers would agree with that attitude.

But what the town’s press release fails to mention is that dolphin meat in Japan is increasingly toxic and unsafe to eat, partly due to high levels of mercury. Also, Taiji is the last town in Japan to still engage in dolphin drives. That’s hardly surprising, as eating dolphin meat is uncommon in Japan, as the movie points out. I also found this to be true during my years spent living in Japan, traveling everywhere from Hokkaido to Okinawa.

All of this makes hunting dolphins in Japan a different proposition from, for example, subsistence whale hunting by Inuits. Taiji’s emphasis on cultural “traditions” obscures the town’s profit motive in selling the caught wild dolphins to dolphinariums not just in Japan, but to other countries around Asia and the world; a captured dolphin reportedly may sell for over US$150,000.

Connecting :”The Cove” and the SeaWorld Tragedy

However, I believe that O’Barry would agree with the town of Taiji on one point: catching wild marine mammals and putting them into captivity is a global business, not just a local one.

Before Hollywood gave the Best Documentary prize to “The Cove,” mainstream media coverage of the death of a trainer at Orlando’s SeaWorld told a whale of a different tale about U.S. public attitudes toward captive marine mammals.

A 12,000-pound orca (killer whale) named Tilikum fatally attacked trainer Dawn Brancheau during a SeaWorld show in February. This was the third human death that the orca has been linked over the last two decades. Animal welfare groups such as In Defense of Animals (IDA) have warned that keeping dolphins and orcas (killers whales) in captivity will inevitably lead to more tragedies.

There was public outcry in Florida, especially by conservative religious groups, to immediately euthanize Tilikum. Tilikum’s fate is still undecided, but apparently the show must go on. Only three days after Brancheau died, SeaWorld resumed its popular whale show, albeit this time with trainers exercising more caution (e.g, giving directions from afar, not swimming with the animals or performing stunts in the water).

What price are we willing to pay to keep intelligent marine mammals captive? Some would argue that visiting amusement parks like SeaWorld is educational. It’s also true that some marine theme parks contribute to endangered species conservation and research. For example, SeaWorld works to rescue and rehabilitate Florida’s endangered manatees before returning them to the wild.

But what public audiences see at SeaWorld shows – dolphins and whales jumping through hoops and performing tricks – is unnatural. Similarly, you won’t see captive marine mammals behaving naturally during popular (and extremely profitable) “dolphin encounters” and swim-with-a-dolphin programs at amusement parks around the world.

Of course, not everyone has that opportunity to see wildlife in the wild, so, is keeping marine mammals in captivity justified?

Some argue that animals born and raised in captivity are not harmed in the same way that those who have been captured from the wild are. But scientific research has shown that marine mammals kept in captivity tend to have shorter life spans than their wild counterparts.

They are also more likely to suffer injuries (e.g., a dorsal fin injured when performing tricks or giving rides to humans) and may become ill from exposure to human disease and bacteria. Positive reinforcement techniques are not always used at marine theme parks, where holding tanks can be shockingly small.

Taking the Next Step (or Not) with Wild Dolphin Swims

Even travelers who agree that dolphins and whales should not be kept in captivity or trained to perform tricks may still defend swimming with wild dolphins. 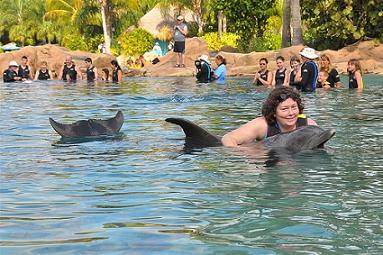 When I lived in Hawaii, many self-described animal lovers talked glowingly about guided boat tours that took them to swim with wild dolphins, describing it as a “spiritual” experience. Many of these travelers anthropomorphize the dolphins, claiming they looked “happy.” But in fact, the dolphins may have little or no choice about whether to remain in the area or to leave.

Scientific studies have shown that swimming with wild dolphins can be detrimental to their health. When dolphins come into the islands’ protected bays to rest, the presence of humans and motorized boats can be disruptive. Later, when the dolphins swim back out into the open ocean to feed, they may be less able to fend off predators due to exhaustion. Some dolphins may be permanently driven out of safe resting places due to ongoing human disturbance by tour boats.

Is the pleasure of swimming with wild dolphins more important than the harm it might later cause those marine mammals? Perhaps “The Cove” has even more to teach us about ourselves than about Taiji, Japan.

At home and on the road, how do you decide which zoos, aquariums, wildlife tours and other animal attractions to support? How do you make such decisions when you don’t speak or read the local language? Does knowing that a performing animal was born and raised in captivity instead of being taken from the wild make a difference to you? Share your thoughts below.

Interested in animals? Read more articles from our archives: