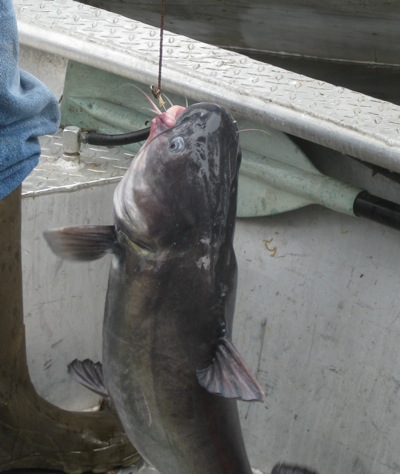 Roy, a fisherman in his early seventies, pulls a foot-long catfish up on one of the lines he’s lain throughout the swamp.

He hauls it into the boat, pulls the hook from its lip with a practiced yank.

The catfish emits a guttural gurgle that Roy doesn’t appear to notice. He plops the fish on the shiny silver boat bottom, now speckled with blood. I watch the catfish gasp and struggle for life, flopping about helplessly. I can’t look away – I’ve never seen a fish, or anything else, die before. Roy, however, climbs to the back of the boat and speeds on to another line. The dark, whiskered creature is soon a still mass of scales and flesh.

It is one of only two catfish that Roy will bring in today.

The words echo throughout the Atchafalaya Basin during our trip: “I always wanted to be a fisherman. I love fishing. But it’s not like it used to be; you can’t make a living fishing anymore.”

I was traveling in a group of 12: 11 students and Sheryl St. Germain, our professor and a Louisiana native. She’d brought us to the Atchafalaya to inspire our writing and teach us about a culture that is disappearing with the 25 miles of Louisiana coastline that turn into sea each year.

Annual floods provide a good environment for crawfish to breed and grow. However, in recent years, floods have been bringing extra silt into the basin and burying crawfish breeding grounds or the floods haven’t come at all, depleting the water of oxygen and freshness. And it’s all because of human control of water flow.

“I close my eyes to smell the swamp and try to internalize the feeling.”

Greg supports himself with writing, photography, and rescuing sunken cypress logs to turn into art and furniture. Roy had to take a job as a hotel maintenance man. But both men make time for fishing and teaching visitors about the Atchafalaya.
As they work, they wait to learn if oil from the BP Gulf oil spill will seep into the Basin.

“It depends on whether the river currents can keep the oil out in the Gulf. If the water level in the Atchafalaya gets very low in late summer and early fall, oil could creep upriver and into the Basin. That would probably have a devastating effect on all life in the water, including crawfish,” says Greg. “There is plenty oil in the marshes already, along the Gulf, and a hurricane could spread it north into the Basin swamps.”

Roy hauls up a crawfish trap – there are only a handful of crawfish in it. He lowers the trap back into the water without emptying it.

Maybe tomorrow there will be more.

Human actions endanger our own habitats and livelihood, as well as the habitats of animals. Read about other threatened places in 9 Places to Experience Now Before They Literally Vanish.

Tagged
Travel Louisiana, United States
What did you think of this story?
Meh
Good
Awesome

I traveled to South Africa during Omicron. This is what it was like.
Travelers are sharing the biggest culture shocks they experienced in the US
The optimal itinerary for a US national park road trip, mapped
The 22 places you need to travel in 2022
11 of the deadliest concert disasters in recent history

15 things you need to know before visiting Louisiana

An Anthony Bourdain college course is starting in 2019

7 best places to binge on beignets in New Orleans