03:28 Jul 29, 2021
View all travel news
Top Regions
Top CitiesView All Destinations
Trending Regions
Trending Cities
Load More
This story was produced by our friends at The Coral Triangle. Visit their site for more information on preserving this precious ecoregion and seeking out sustainable travel experiences within its borders.

IN CENDERAWASIH BAY on the remote north coast of West Papua, Indonesia, a little boy on a bagan fishing platform is staring into the water, fearful but fascinated. He watches as I suck in a lungful of air and dive down with my camera to where a group of slow moving whale sharks, some as long as 11 meters, has gathered. There’s nowhere else in the world that you can witness whale shark behavior like this.

The boy’s name is Fajar, and he’s on his summer break. Forty-eight hours ago, he was saying goodbye to his classmates at his school on the island of Sulawesi. He’ll be spending two weeks of his vacation here with his father, a fisherman who lives and works on this small wooden structure for months at a time, catching fish in the voluminous nets attached underneath. Bagan fishermen use lights to attract plankton, which in turn attract planktivorous fish, squid, and other predators. In the early morning hours they take up the nets, which are often filled with thousands of fish. 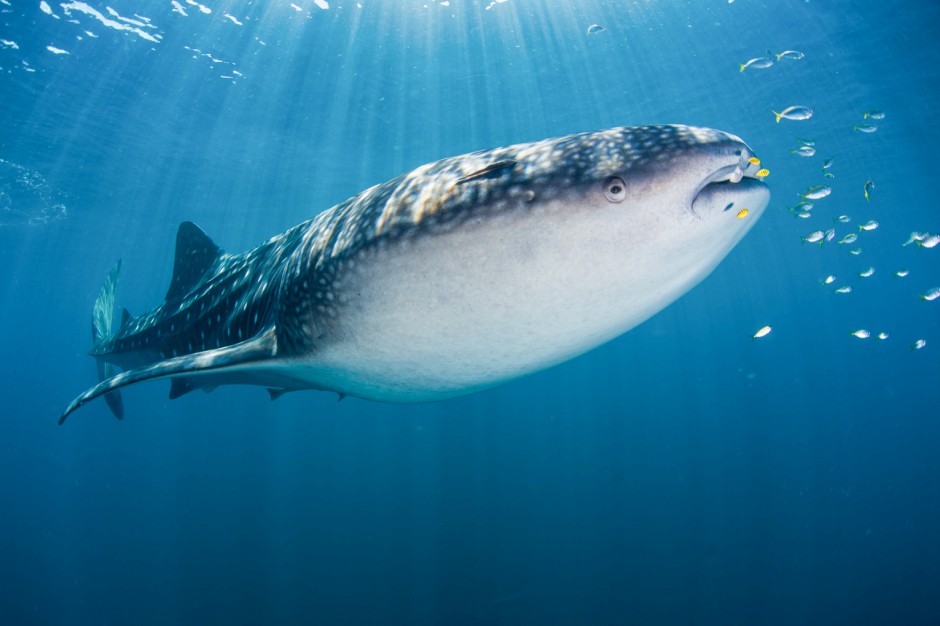 It’s the fish that attract the whale sharks, of course. Primarily filter feeders, they’re happy to suck some of the smaller fish through the net, swallowing them whole. Whale sharks do in fact have tiny teeth — around 3,000 in each jaw — but it’s an evolutionary throwback that could disappear completely within a few centuries. Unless the sharks themselves disappear first. There’s a real danger they could be hunted to extinction by their most deadly predator species, Homo sapiens. Whale sharks are already classified as vulnerable by CITES, but they’re still killed so their fins can be turned into soup, their skin into leather, and their oils into cosmetics and medicine.

But the fishermen here, most of whom are from Sulawesi, don’t kill the whale sharks, because they believe the huge fish bring them good luck. They call them hiu bintang or “starry sharks” because of the pale spots and stripes that mark their skin. Some fishermen I’ve spoken to believe the huge fish bear secret maps of the heavens on their skin. But these days the fishermen have another reason not to harm the gentle giants: tourism.

In 2002, the Indonesian government declared Cenderawasih Bay a national park, affording, on paper at least, protection for the area and its marine life, including the whale sharks. The area is in the heart of the Coral Triangle, an underwater Amazon that’s home to more marine species than anywhere else on Earth. It wasn’t until 2007 that the World Wildlife Fund (WWF) discovered the symbiotic relationship the whale sharks here had struck up with the bagan fishing crews. By regularly feeding the sharks, they prevented them from pilfering their nets — and inadvertently became dive tourism entrepreneurs in the process.

2007 was also the first year I sailed these remote waters, when there was barely another boat to be seen. Since then, an increasing number of live-aboards have been including Cenderawasih Bay on their itineraries. The boat operators pay the fishermen a licence fee to allow their guest to dive and snorkel with the whale sharks that congregate around the bagans.

The fishermen may respect the whale sharks, but they also fear them and wouldn’t dream of getting in the water with the crazy tourists. So when I suggested to Fajar that he try snorkelling with me, it was no surprise when he refused. But a little gentle persistence and reassurance helped him overcome his fears, and the next day he reluctantly agreed to let me teach him how to snorkel. 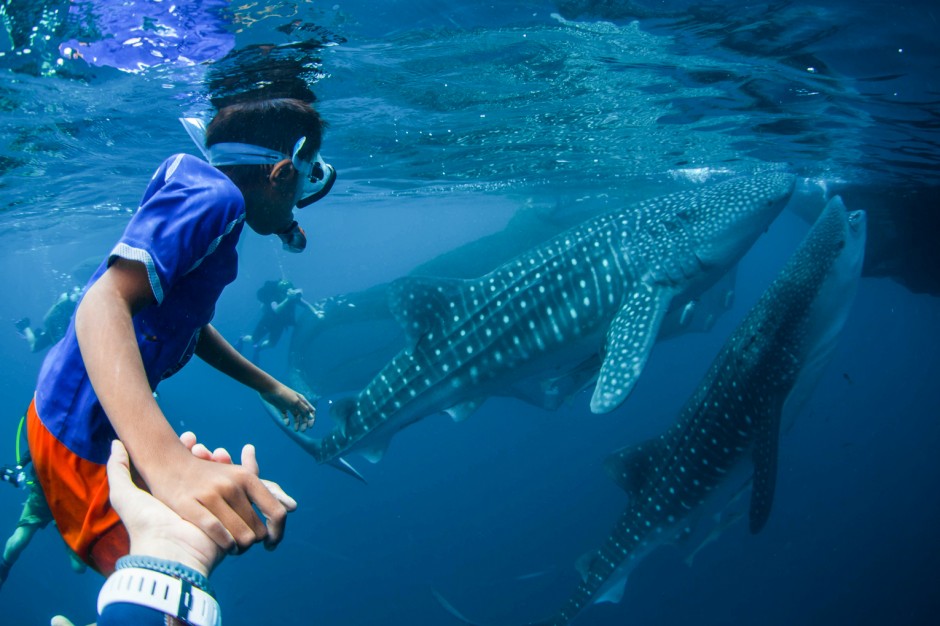 There was barely enough time for him to get the breathing technique down before the first of six whale sharks approached him with obvious curiosity. He panicked, so I had to lift him out of the water and calm him down. I’d explained the biology of whale sharks to him, so he knew there was no danger — but swimming for the first time in open water with the biggest fish on the planet is intense, to say the least.

Gradually his fascination overcame his nervousness, and holding my hand gave him the security to explore the sharks up close — right up to their enormous mouths, where he could see them inhaling huge surges of seawater laced with tiny baitfish.

The bagan fishermen standing up on the platform were speechless and a little shamefaced at Fajar’s daring. He finally hopped back onto the platform like a superhero and described his experience to the adults. To my amazement, he persuaded them one by one to get in the water, and I found myself guiding a series of grizzled but nervous fishermen among the sharks. Afterwards, Fajar couldn’t stop grinning. He told me the whale sharks were his dad’s friends and that they’d keep him safe out on the bagan. “Wait till I tell my friends back at school about this,” he said with shining eyes. “They won’t believe it.” 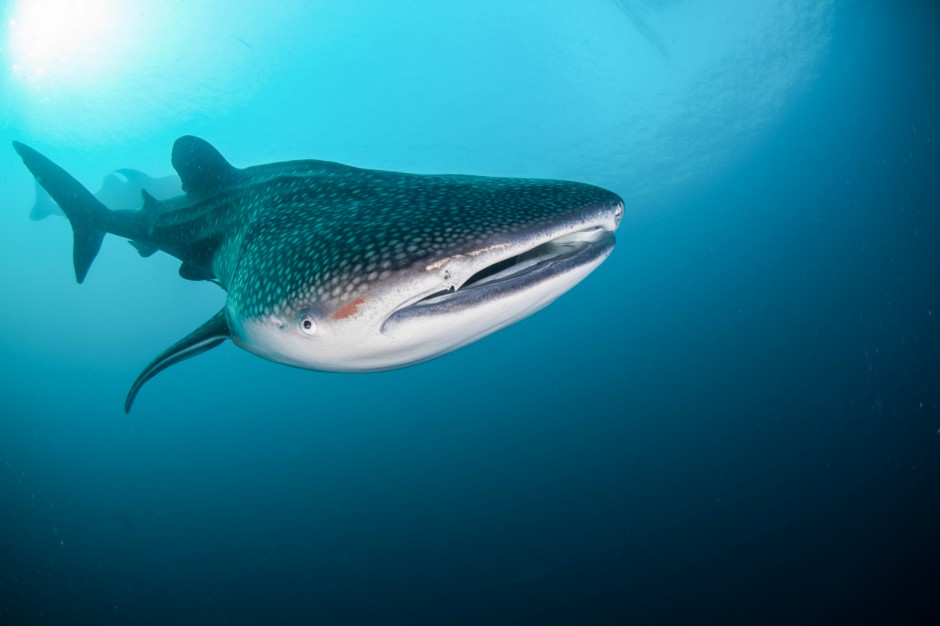 This is 'Bubbles,' a male whale shark juvenile about 3m long. The shot was taken on scuba in approximately 40+ meters of water. He slowly bounced into my dive mask and camera a few times in order to get a closer look. 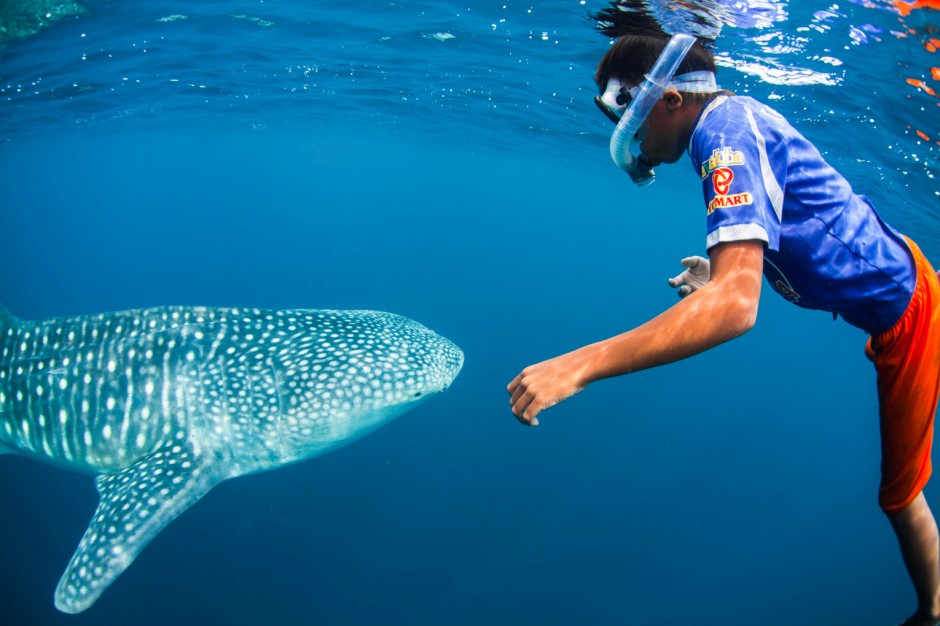 After Fajar got used to the breathing technique via snorkel, he could free float on the surface close by my side. The sharks checked him out closely—it was touching to see the interaction between the little child and the jumbos. 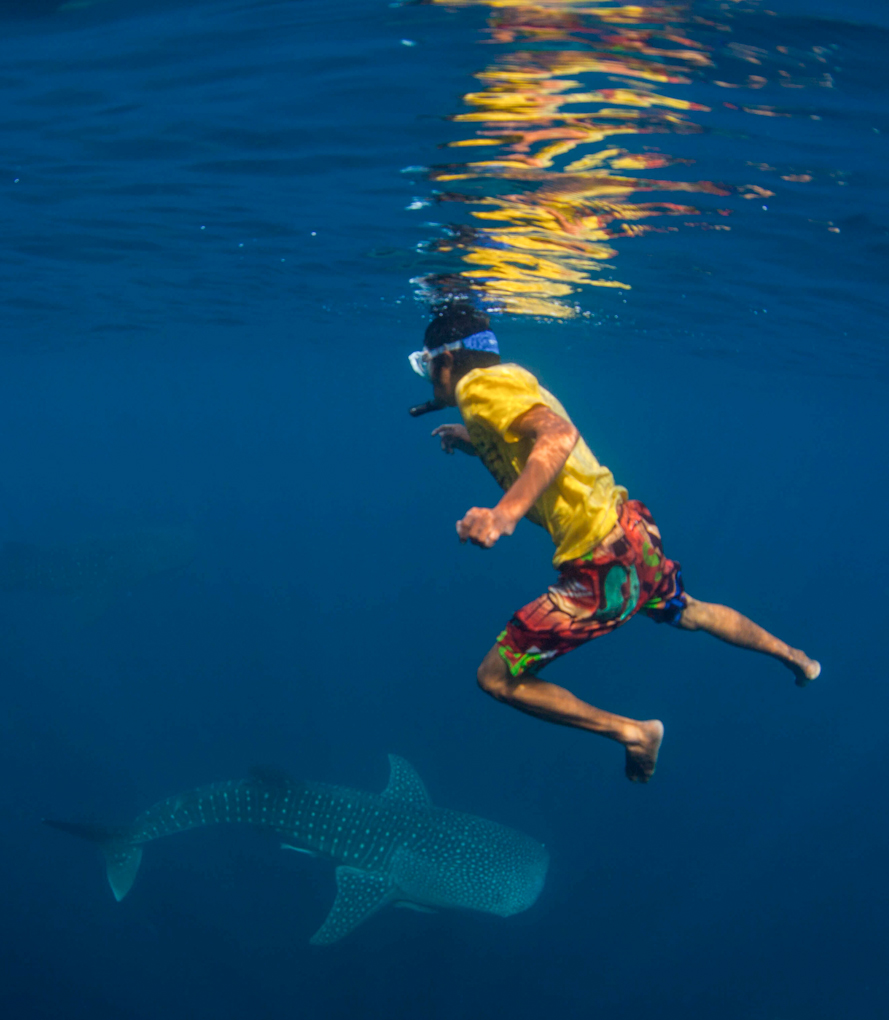 Ardhe Paster, a bagan fisherman from Bone in South Sulawesi. He was the first to jump in the water after Fajar encouraged him. After some initial fear and obvious discomfort, he would jump in with us every day at least once and always came back up with a blessed smile on his face. 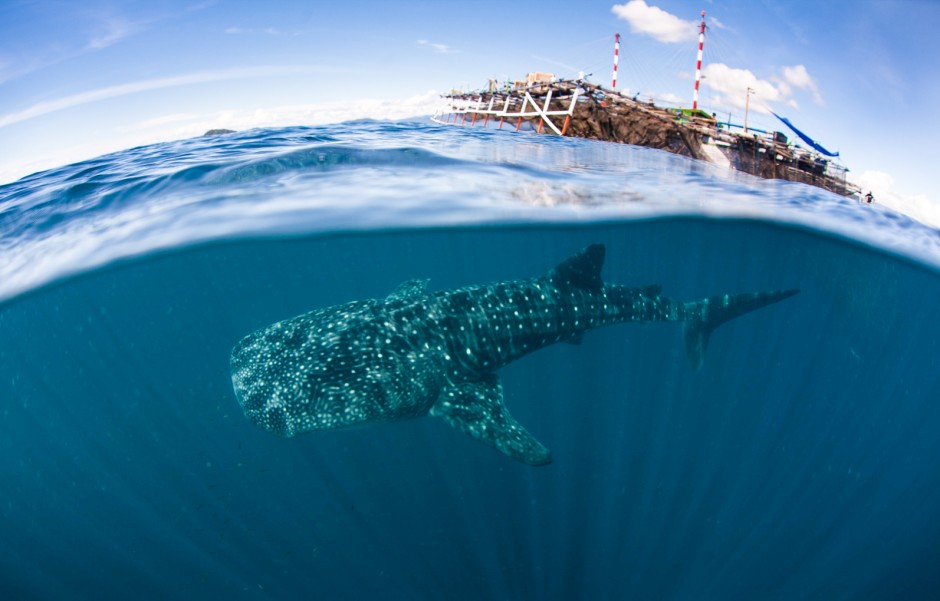 Snorkeler's view of the world above and below. The bagans are floating above a sandy bottom, which steeply drops from approximately 50m down to over a 100. 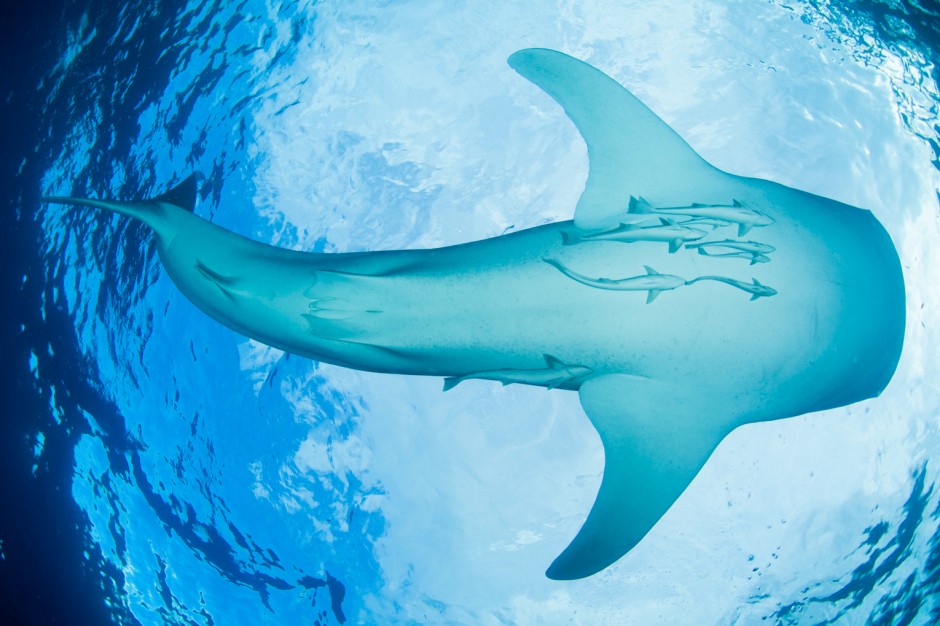 On the belly of this male whale shark are several remoras, which have converted their dorsal fin to a suction device so they can attach to their "mothership" and get a free and effortless ride. The remora were also feeding on the baitfish from the fishermen. 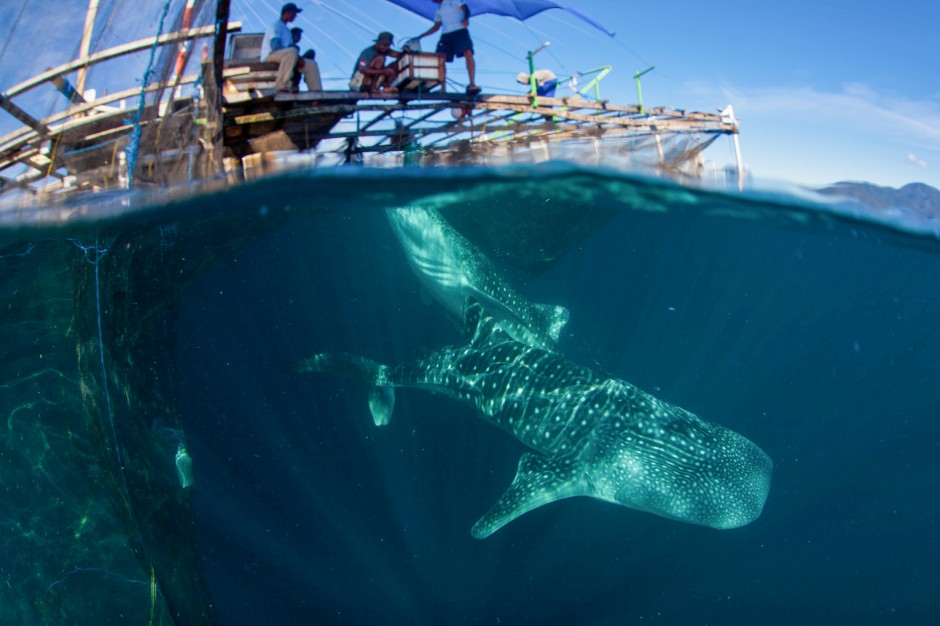 The fishermen and their mascots. Split shot showing the union. 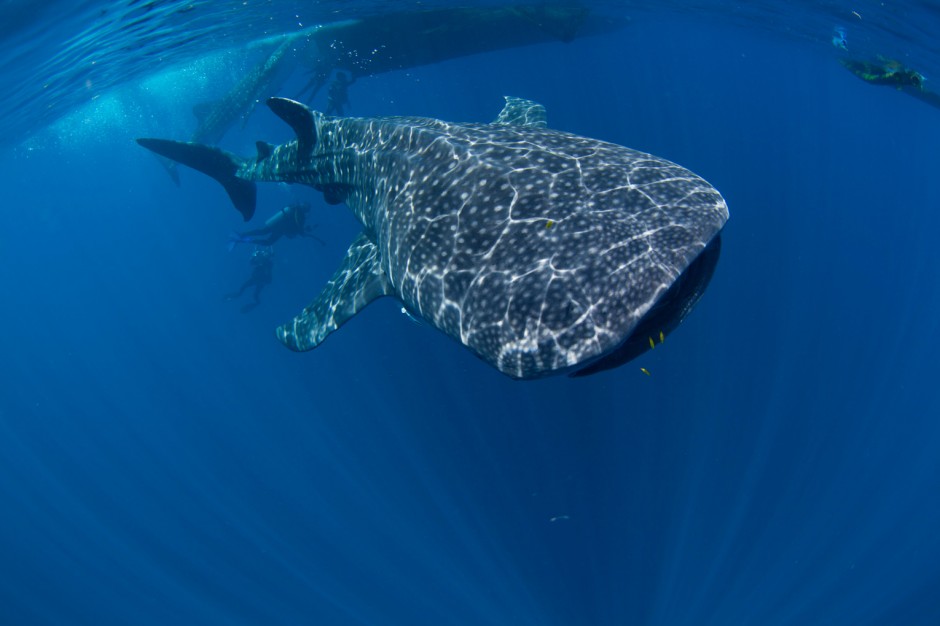 As the sharks swam circles around the bagans, they filtered plankton out of the water. 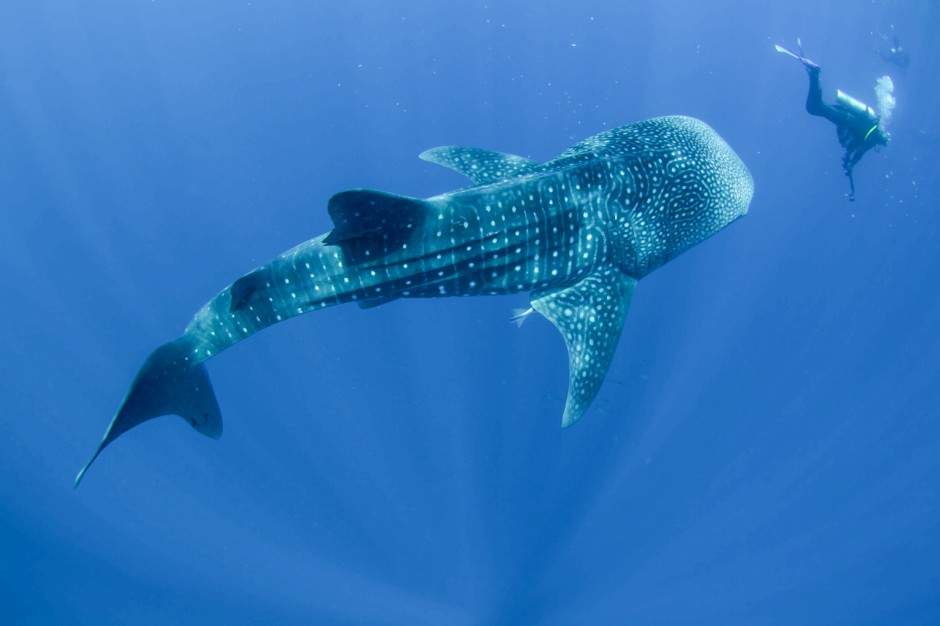 Tagged
Diving
What did you think of this story?
Meh
Good
Awesome

In Greece, a shipwreck from 500 BCE is opening as an underwater museum