Antoinette is only 38 years old, but she has advanced-stage breast cancer. By the time I met her at the Project Medishare hospital in Port-au-Prince, Haiti, the tumor had eroded the skin of the breast, creating a foul-smelling wound.

The tumor in her right breast had grown for two years before she acknowledged it would not go away on its own. Doctors in the United States often require mammograms, ultrasounds, and repeated biopsies for diagnosis. Doctors in Haiti diagnose breast cancer before a woman removes her bra. By the time Antoinette sought medical care, the tumor was larger than the whole healthy left breast.

Those doctors confirmed Antoinette’s fears about the cost of surgery to remove the breast and then told her of the price of chemotherapy — a total of over $1,000. The surgery and chemotherapy were out of the question for a family that makes only $1,000 per year. She bounced around hospitals looking for help that her family could afford, but found none.

Antoinette has beautiful teeth but rarely smiles these days. I told her not to worry about the money, that Project Medishare treats all women regardless of their financial situation, and she looked at me skeptically as I escorted her to an infusion chair. She took off her plaid jacket so the nurse could place an IV, and turned her head towards the young woman in the chair next to her. Over the next three weeks, the Project Medishare staff treated a dozen other women with chemotherapy, some curable, and some receiving medication that will prolong their life and reduce their pain.

I showed up to work in Rwanda with Partners In Health in 2011, fresh out of residency training in New York City. I’d worked off and on in a half dozen countries over the previous nine years and knew that I craved to live and work abroad full time. During the first week, a patient with breast cancer came in for her second session of chemotherapy.

“Chemotherapy?” I asked my Rwandan colleague in astonishment, surveying the ward of this rural hospital in sub-Saharan Africa, filled with patients suffering from infectious diarrhea, end-stage AIDS, and tuberculosis.

“Oui. We have a few patients on chemotherapy here. If we can treat a complex disease like HIV, why not cancer, too?” he answered with a smile. We looked up the dosages of the medications and read up on cancer literature; I sent emails to colleagues in oncology enlisting their help. A year later, Partners In Health and the Rwandan government officially opened a national oncology center, the first of its kind in this part of Africa.

People often ask, “Isn’t the money you’re spending on cancer care better spent on other illnesses that are cheaper and easier to treat?” People are supposed to die of cancer, the argument goes, even in developed countries.

I remember hearing a similar argument in the late 1990s about the scourge of AIDS. Some said HIV/AIDS was too complicated to treat in developing countries, the cost of medications too high, and other simpler diseases should be addressed first. So AIDS reversed decades of development in high-burden countries, and the global community resigned to watch millions die. Then, in the waning days of his administration, President Bill Clinton reluctantly agreed not to enforce patents on AIDS medications in poor countries. The price of treatment plummeted and, in 2003, President George W. Bush proposed an ambitious plan to treat and prevent HIV/AIDS around the world. By the end of 2012, 10 million people were on treatment for HIV/AIDS and more than a million lives had been saved. 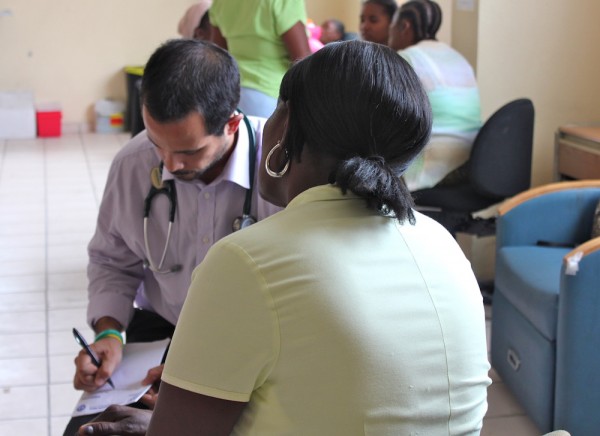 Much like the AIDS epidemic, which had been treatable since 1996, the cancers that claim the lives of the people of Haiti or Rwanda are preventable and treatable with simple tools currently available. In fact, most of the chemotherapy being used in developing countries has been around for a quarter century. Like HIV/AIDS before it, cancer concentrates in the countries that can least afford to combat it: Two-thirds of all cancer cases occur in low- and middle-income countries.

Breast cancer is the leading cause of cancer death in women worldwide. Women in developed countries present with cancer after age 50 or 60; more than half the patients in the Project Medishare program in Haiti are younger than 45. Without access to treatment, breast cancer is universally fatal, usually in less than three years. According to the World Health Organization, more than 13 million people will die of cancer every year by 2030 if we do nothing.

The question we must ask ourselves is not, “Why should we treat cancer in developing countries?” but “What has taken us so long to try?”

Project Medishare, founded in 1994, is slowly proving that cancer care is possible in low-resource settings and at reasonable costs. In Haiti, the full cost per patient, including diagnosis, surgery, and chemotherapy, is $1,500, compared to an average of $25,000 in the United States. As more programs join the fight against cancer, prices will drop, much like what occurred with HIV medications over the last 10 years.

The HIV/AIDS epidemic taught the global health community about implementing health programs in developing countries. The networks of clinics and hospitals that were built with the money and political will to defeat HIV/AIDS have had tremendous impact on the health of poor people everywhere, reducing maternal and infant mortality, increasing vaccination rates and coverage of insecticide-treated bed nets for the prevention of malaria. Similarly, the global health community hopes that treatment of chronic diseases — such as cancer, high blood pressure, and diabetes — will encourage access to basic primary care. Regular interaction with the medical community will help spread messages about the evils of tobacco, fried foods, and mass quantities of sugar — a public health education from the ground up.

The Project Medishare program is focusing on three areas to fight cancer: Collaborate with the national health system, research, and campaign for public awareness. We’re working with the oncology program of Haiti’s University Hospital as well as with the Haitian Oncology Society to construct a government-led cancer treatment program. We’re researching the causes of aggressive breast cancers in young Haitian women to find a genetic reason that might also lead to targeted treatments.

After two generations of pink ribbon campaigns in the United States, we may find it difficult to imagine a population where the vast majority of women think they have an infection when they feel a lump in their breast. We’re getting out the message in the media that women should do monthly breast self-exams and seek treatment as soon as possible if they find a lump. 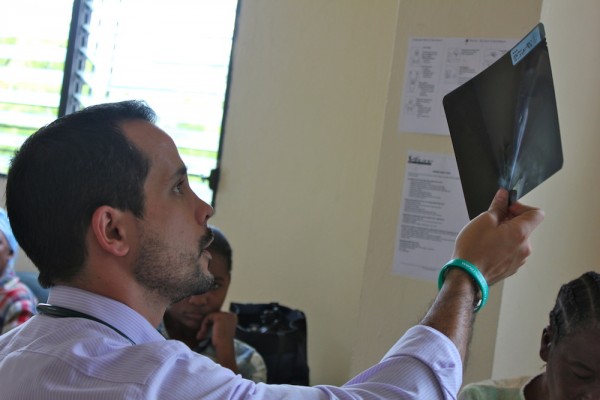 Antoinette has the same right to basic treatment as any woman anywhere in the world. The medication she’s receiving is 40 years old but is still a mainstay of therapy in the United States because of its potency and favorable side-effect profile. She’s not dying of breast cancer, she’s dying of poverty.

At $5 per vial, doesn’t she deserve the medication that offers relief from the open wound on her breast? Is three hours of a nurse’s time every three weeks too much to spend to cure a 38-year-old mother? Should I look into Antoinette’s round, dark eyes and tell her she isn’t worth treating?

The idea that giving a woman with cancer the chance at a cure is somehow sucking up money which could be spent elsewhere assumes we’ve reached the limit of what should be spent on healthcare. However, Haiti spends only $58 dollars per person per year on healthcare, according to the World Health Organization. This amount barely allows for even the most basic health needs. The constitution of the World Health Organization, of which the United States is a signatory, states that everyone has the right to “the highest attainable standard of health.” We don’t control how the cookie crumbles — complications of childbirth, infectious diseases, or cancer — but we have an obligation to address each crumb, however it falls.

With some luck, Antoinette will be cured entirely of her cancer. Those with incurable disease will live significantly longer, on the order of years, with an improved quality of life. The philosophizing and pontificating about how much of the pie we should spend on each disease can be left to those who lack the vision to imagine a larger pie. For Antoinette, the future of global health — treating all chronic diseases as you would in any country on Earth — is here today.

The full version of this article was originally published at Notre Dame Magazine.

Tagged
Wellness Haiti Ambassadors
What did you think of this story?
Meh
Good
Awesome
✖
travelstoke
Download the mobile app
stoked by