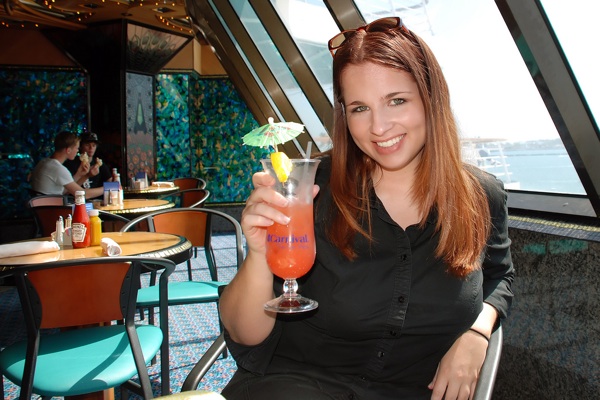 Ego and ethics are important points of the discussion. But would the environment have been important if an onlooker hadn’t brought it up?

The latest twitstorm blew through the travel writing universe over the weekend, leaving the blogosphere breathless–but certainly not speechless–over the quantity and quality of mudslinging that can be done in 140 characters.

I daresay the majority of us following the #followmeatsea hashtag on Saturday and Sunday didn’t give a damn about the spa treatments, fruity drinks, or lavish meals that bloggers on the Princess Cruise Twitter press trip were enjoying and then thumb-diddling about online. I mean, really: who wants to hear about someone else’s free trip while they’re sitting at home up north, slogging away at work? I’m just saying.

As several of us following the twitstorm admitted, we couldn’t look away. Some colleagues even suggested we all go make some popcorn and pull up a virtual chair in this online theater.

The twitstorm was about this: A travel blogger following the hashtag from home raised the issue of the environmental impact of cruise ships. Unfortunately, her phrasing was charged with a certain holier-than-thou tone. What ensued was an hours-long joust of keyboards between said blogger and the bloggers on the cruise, tempered with an occasional observation from those of us on the sidelines.

Before long, the whole exchange–which could have been an excellent opportunity for thoughtful discussion–devolved into a mutually defensive and embarrassingly immature display in which each party clearly wanted to have the final say.

In the midst of the storm, a couple of bloggers on the trip declared they’d speak to cruise ship representatives in order to provide a definitive answer about the environmental impact of cruise liners. They tweeted about their 5.5 hour tour of the ship, remarked about the GPFs (gallons per flush) of cruise toilets (“better than home!”), and insisted that “NO SOLID WASTE [read: poop] goes off a cruise ship!” Princess even, reportedly, “turns its old cooking oil into biofuel.”

Some onlookers were content, saying they “can’t wait to hear the REAL enivronmental facts” from the bloggers who were determined to resolve the matter once and for all.

All of which is well and good, I guess, but the whole exchange leaves me with a few questions:

*Is a 5.5 hour tour of the cruise ship led by people who clearly have a stake in presenting the ship in the best light really going to produce compelling evidence about the “REAL environmental impact” of cruising?

*Were any of the bloggers on the trip concerned about the environmental impact of cruise liners before the issue was raised by someone who wasn’t on the trip?

*Should travel writers care, ultimately, about their own environmental impact?

*And if the answer to that question is yes, how do we figure out what our true environmental impact is?

As I’ve written elsewhere, I’m not opposed to press trips. I’m not envious of the bloggers on this trip–I’ve never been interested in going on a cruise. I wouldn’t have been the least bit interested in #followmeatsea if it hadn’t turned into a disturbing yet fascinating real-time case study about the intersection of comped travel, social media, and environmental issues. Were any of the bloggers on this trip concerned about the environmental footprint of the trip before they eagerly signed on to cruise around the Caribbean on Princess’ dime?

My own opinion is an unequivocal yes. What’s yours? I hope you’ll share it–politely, please–in the comments.

Missed the other recent twitstorm about travel writing ethics? You can read all about it here.

You can now buy a subscription to offset your carbon emission