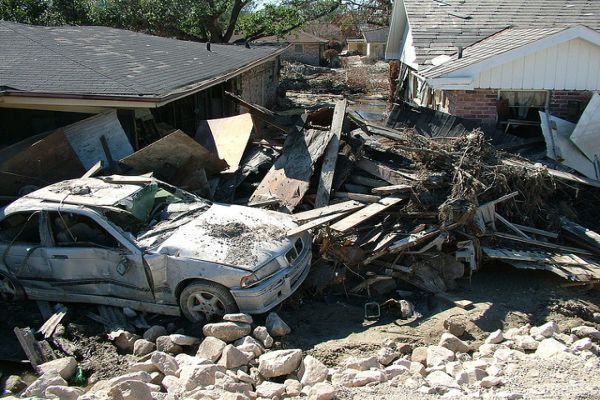 Feature Photo: scottobear/ Photo Above: lsgcp
The other day I was watching MTV’s Real World, which takes place in New Orleans this season, and in this particular episode the group took a tour of Post-Katrina New Orleans.  From a van, with a tour company.

I was immediately both angered and appalled.

Many of the people affected by Katrina are still putting their lives back together, and companies are taking tour groups through there?

The tours go through the areas devastated by Katrina with the apparent plan to educate and demonstrate the devastation that still exists today in New Orleans, stopping by leeves and driving through neighborhoods where you can still see damaged houses and even a boat that washed up in someone’s yard!  Is this just like the slum tours in Mumbai or the favela tours in Rio de Janeiro?  It is something for people to look at from the safety of their vans?

So I did some research.

For the most part, it looks like companies are selling tours and pocketing the money.  From the websites, it’s hard to tell what their motivation actually is, whether it is truly to educate or whether it is to make some money off of a bad situation.

Then I found Gray Line Tours, and although the site has some gimmicky lines that promise driving past an “actual levee that breached”, it appears that the group put some thought into creating this business.   According to the website, the company was created when members of Congress were resistant about funding the rebuilding.

The goal of the tour is to “accurately inform” visitors about New Orleans, its contribution to the rest of the U.S. and why it’s important to support the rebirth of the city.  There is also a statement at the bottom stating that “areas of the city that did not receive the main focus of media will be visited.”

Gray Line is one of the cheapest tours that I found ($35 for adults) and will donate $3 from each ticket to one of the local charities.

But on the other hand, even if the tour operators’ motivation is to make money off of the devastation, couldn’t they still bring awareness?  Visitors are seeing firsthand that this is still a problem New Orleans is dealing with, even though the hurricane hit over five years ago.

The truth is that there is a lot of work to be done, and it’s easy to say that it is a problem “over there,” even when “over there” is a just a state or a few hundred miles away.

This is an issue that they may never be an agreement upon, and maybe it isn’t about right vs. wrong.  Maybe it is actually about taking action than taking a tour.  Sure, the world needs to know that New Orleans (and Mumbai and Rio de Janeiro) have areas that are in bad shape, but maybe they need help.  On the ground, get your hands dirty help.

Get in there and make a difference instead of looking through the window of a tour van.  Habitat for Humanity or FixNOLA.org are great resources and would be a good place to start.

I’d love to hear your thoughts – have you taken or would you take a Katrina tour?

Megan Hill is someone who has volunteered in New Orleans to help rebuild the marshes, which act as natural barriers.  She reflects on her experience in New Orleans Five Years After Katrina: Rebuilding Marshes.