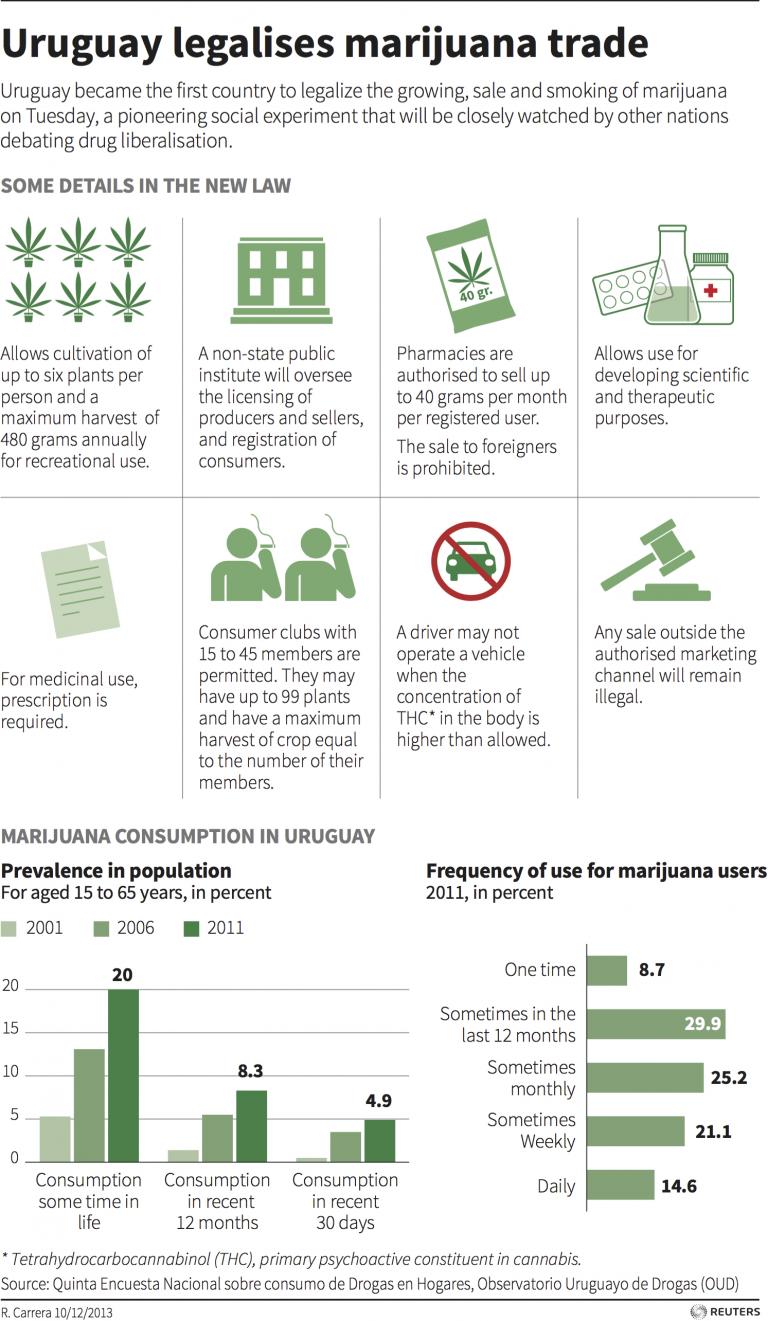 A little over two years ago, then-Uruguayan President Jose Mujica signed a law that at the time was seen as revolutionary.

Uruguay was set to become the first country on Earth where the cultivation, sale and taxation of marijuana would all be legal. Most extraordinary, the tiny South American nation planned to grow, tax, and sell weed itself — as in, government-sponsored weed sold directly to residents ages 18 and up at licensed pharmacies nationwide.

But, two years later, it is still impossible to buy weed legally in Uruguay.

You can grow your own. You can join a cannabis “collective” and share pot with your friends. You can also smoke weed, as you have been able to since the 1970s. But actually buying it from anyone is still entirely illegal.

As we have reported, the plan has hit more than a few delays.

In the early days, after the law was signed just before Christmas in 2013, the government itself planned to grow the weed, which it would then package and distribute to drugstores.

But that plan was soon scrapped. Instead lawmakers decided it would be better to contract out the growing process to private companies.

A lengthy bidding period ensued as companies from across the world lobbied to be the first in this exclusive growers’ club in a cannabis-friendly nation. Officials kept on declaring they were close to announcing the contract winners, only to disappoint prospective investors by putting off the decision again, and again.

There was also a lot of confusion about whether pot would actually be taxed (the government first said no, then admitted it would), and how much it would sell for (the government said $1 a gram, but experts said that was impossible).

Then suddenly, in October, a government spokesman announced two companies — Symbiosis and ICCorp — had been chosen to grow Uruguay’s pot.

The venue for these crops? A former prison outside the aptly named town of Libertad (Freedom), west of the capital, Montevideo.

That announcement was three months ago. There’s still no legal weed.

Milton Romani, who heads the National Drug Council, did offer reporters a few extra details, like the new May or June deadline, and the fact that Uruguayans will have a choice of three strains of government-sanctioned pot to choose from.

It’s still unclear how lawmakers plan to tackle the tricky issue of selling pot at the drugstore, something many of the country’s pharmacists are against. And it’s also unclear how Uruguay plans to sell pot at $1.20 a gram, when legal marijuana in the United States and elsewhere sells for more than 10 times that.

Uruguayan media have greeted 2016 as the year pot will be sold in pharmacies. But given the problems that still need ironing out, and the government’s history of dragging its feet, it’s entirely possible pot won’t make it to the shelves this year.

Tagged
Travel Uruguay
What did you think of this story?
Meh
Good
Awesome