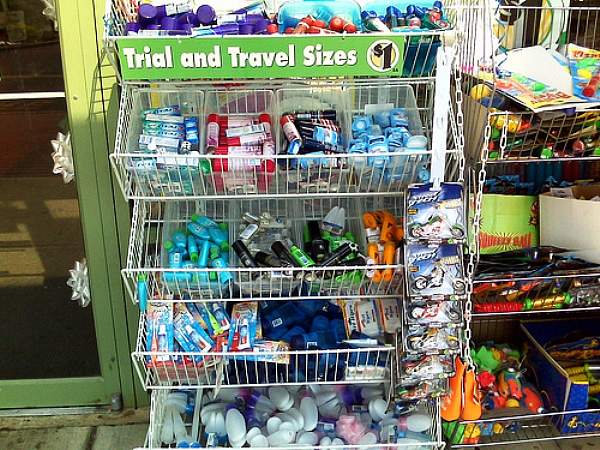 Feature Photo by klyphord. Photo above by morrissey

Here are ten items that some people can’t seem to live without on the open road.

For the dog that still thinks he is in college and just hasn’t gotten around to buying a real couch.

Described as perfect to tuck away for anything from “a rave with friends to an intimate Jacuzzi with your special someone.”

Aside from other uses, this is ideal for the traveler with a duck fetish.

Phillip Morris is reportedly developing 2.8 inch cigarettes, for those of you who need to sneak a quick-y. But remember not to smoke in the airplane’s bathroom, because lavatories are equipped with smoke detectors and tampering with, disabling, or destroying one is prohibited.

Unplanned murder: It can happen during anyone’s holiday. Luckily, mini duct tape makes it possible to secure the body in a rug and drop the remains in the Seine.

This cheese spread is just one example of how particular people are about their tiny food. Peruse the astounding Minimus site for travel sized portions of A1 Steak Sauce, chocolate syrup and grapefruit jelly.

Pumped full of ‘roids and fidgety on the flight to Australia? Not a problem. When filled, these suckers provide 32 pounds of weight training resistance.

As the Amazon description is keen to point out, Aquabells are great because “carrying your weights through airports is impractical.”

For those of you who insist on trying to make Jetblue flight into more than it is (a bus in the air).

Relive your childhood by playing the smaller version of the game that also breaks in five seconds.

Little emo boys everywhere are rejoicing because they now have a product that allows them to straighten their hair during the marching band’s trip to Disneyworld!

Dude, you know that the one in your wallet is kind of janky.

Why not upgrade to a case that could easily be mistaken for something that holds your retainer?

100% recyclable and available in three colors.