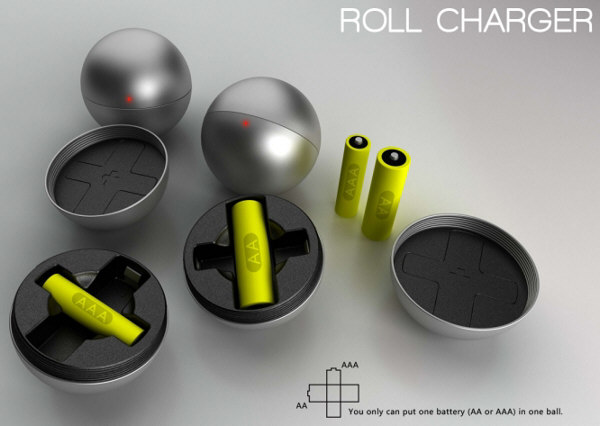 The Roll Charger, created by product designer Jiang Qian, is a battery charger based on traditional Chinese rolling balls, also known as Baoding Balls. Rotating two Baoding Balls in one hand is believed to stimulate acupuncture points and finger nerves, as well as loosening bones and muscles.

This in turn invigorates the cerebrum and central nervous system. The result leaves the user feeling refreshed and relaxed.

Baoding Balls have been used for centuries as health and fitness toys in China. Now Jiang Qian has found a way for them to benefit the environment as well.

As a battery charger, each Roll Charger ball holds a single AA or AAA battery. Because two balls should be used to utilize the full health benefits, two batteries are charged at once. The mechanical energy created by rotating the Roll Chargers in the palm is captured, and the device converts that motion into electricity.

Each ball features an LED, which confirms that the charger is functioning and alerts the user when charging is complete.