Prior to starting private Portuguese lessons, I listened to Brazilian music obsessively for nearly two years. I sang along, mimicking the sounds I heard and yelling “na palma da mão!” and having no clue what I was saying.

When I did start to actually study the language, my teacher was surprised. “Your accent is perfect,” she said. I suppose I owe a thanks to Daniela Mercury and Gilberto Gil for that. And as I learned more and began to have simple conversations, listening to the same tunes became a new experience. It wasn’t just that I started to recognize words in the songs, but more the realization that just listening to the music without actively trying to understand the words made language learning much, much easier.

So when I came across this description for Earworms Mobile, I knew they were on to something:

earworms mbt® Rapid Languages is the first language trainer to get your toe tapping. Simply by listening to these specially composed melodies with their rhythmic repetitions a few times, the sound patterns are indelibly burned into your auditory cortex. You will have successfully learned the phrases and have the correct accent ringing in your ears. Wherever you are, whatever you are doing: In the car, while jogging, in the bath, doing the ironing…you can be learning a language at the same time!

The idea of using music to learn is ancient, and honestly one I wished was used more frequently in schools. As an ESL teacher, I incorporated songs into most lessons, especially with my kindergarten students. It’s possibly the best tool for memorization. Consider which would be easier for you; memorizing a poem, or song lyrics.

While I knew the concept was sound, I was curious as to the methodology Earworms would use. Frankly, a few of the CDs I used in my Korean ESL classes had songs but were poorly done (and irritating). 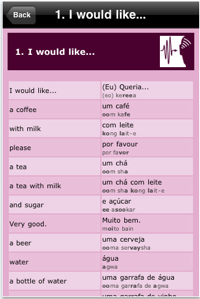 Earworms is neither. First, real instruments were used to record these tracks, which have a sort of mild, jazzy hip-hop vibe. For me, this is make-or-break. I’d prefer the dull textbook method for language learning if the only other option were listening to cheesy synthesized tracks, but Earworms music is quite tasteful.

The “lyrics,” which are of course the phrases and translations, were equally well done. When I first described the concept of Earworms to my mom, she wondered whether hearing a phrase sung the same way repeatedly would lead to pronunciation problems (or more amusingly, whether you’d only be able to say the phrase in a sing-song way).

But that’s not the case; while the phrases (both in the target language and English) are rather rhythmic, they aren’t melodic, and both speakers use different inflections and tones when repeating so you really hear how to say the phrase, not sing it.

Earworms is targeted specifically at those who want to learn the basic phrases needed when traveling to a new place. In their words:

This is your survival kit of immediately useful words and phrases for your visit abroad, listen a few times to be able to ask for a table in a restaurant, order food and drink, take a taxi, rent a car, buy tickets, deal with money, numbers, times and days, ask for directions, deal with typical problems, hold a simple conversation and much more, all in the palm of your hand.

More than a podcast? Yes.

Here’s why: I actually used it, and it worked. Other iPhone apps or podcasts that aim to teach these same basic phrases are a chore to listen to. My mind wanders and I miss stuff. When my mind wanders while listening to Earworms tracks, those phrases still stick in my head. It’s like leaving a cafe and realizing that Single Ladies must have been playing. You weren’t actively listening, but it’s sure on repeat in your mind now.

The app itself is also beautifully designed. Choose one of the ten tracks on the main menu’s wheel. Each track has a topic focus (directions, numbers, food), and while it’s playing, a chart appears with the phrases taught in the song in written in both English and the target language. Each track is between five and ten minutes long, and the compositions are different (meaning you aren’t listening to the same musical loop for an hour).

This is to date the best app I’ve come across for quickly learning basic phrases in a new language. Press play and listen to music while you run, walk the dog, shop, cook, whatever. With 13 languages to choose from (and two volumes for Spanish), I highly recommend considering Earworms if you’re looking for foreign language help.