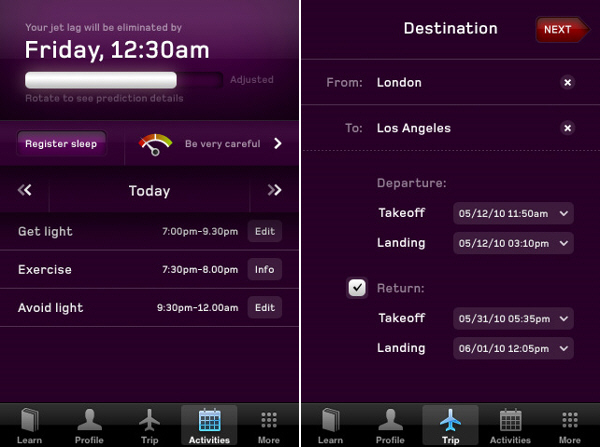 Sometimes disguised as a 12-hour energy draining nap that ensures you miss half your trip, jet lag is no fun.

And here at Matador, we’ve covered jet lag extensively; from outlining 13 ways of avoiding jet lag to reviewing the book, The Cure for Jet Lag; so you’re armed with some solutions.

Yet, the ultimate cure seems elusive.

If all natural remedies have failed you, and you happen to own an iPhone, now you can finally fight jet lag with technology, courtesy of Virgin Atlantic.

Teaming up with the Edinburgh Sleep Centre, Virgin Atlantic has released the Jet Lag Fighter; an app that is compatible with both iPhones and iPads.

To fight jet lag using the…well… Fighter, you’ll first need to type in your flight details as well as a few personal details like age, sex, and any history of insomnia (or sleep patterns). The app then does some crunching and spits out a jet lag fighting itinerary with exact times of day to do some basic activities like sleeping and exercising.

It also tells you when to seek out some light or when to avoid it altogether along with a predictor that tells you exactly which day and time your jet lag will be eliminated.

AirFly Pro Is the Best $50 I’ve Ever Spent on a Travel Accessory
This Small Backpack Is the Only Travel Pack an Efficient Packer Needs
How To Take Amazing Travel Photos With Just a Phone, According To Photographer Henry Wu