Photo courtesy of the author, feature photo by Virginia Hammer

Each key had to be pushed down with determination. Otherwise, the jet-black ink would only partially touch the paper, and the letter that was supposed to be printed so clearly would only be a trace.

Difficult to decipher from a distance, such a partially printed letter left you two options: it could either be left as a mere shadow, or you could go back and type the same letter exactly above it.

The latter, however, required almost supernatural skills; being able to place the typewriter exactly in that same position was impossible. You always ended up with a letter slightly to the left or right of the “shadow” that didn’t come through fully the first time around.

So, in the end, you lost either way. The letter was a futile effort, and you were always left fearing that subsequent readers would perceive you as a feeble typewriter. In fact, they didn’t even have to read the words; it sufficed just to look at the page.

Those were the times of old mechanical typewriters. Growing up, I would see my parents giving it their best shot, and naturally, I also wanted to “play”. To me, it looked like a great toy. Although I’d like to say that my playing with the machine symbolizes my innate desire to become a writer, it was the clack, clack, clack sound that I really loved back then. No wonder I was inclined to learn piano later on; I had already practiced acquiring equal strength on all fingers. 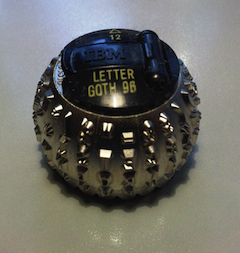 Photo courtesy of the author

With IBM came the electric typewriter, but the trials and tribulations didn’t end here. After a while of hitting keys, the ribbon ended and needed to be replaced. However, this wasn’t an issue since these ribbons were widely available.

Fact is that members in my family still use the electric IBM 196 C from 1981. And not in any way as an antiquated toy. Quite the contrary, it is an essential machine in their office because it allows them to fill out forms with a clean and polished finish. Printing letters by hand is uneven, and the IBM does the job perfectly.

When the part corresponding to the computer’s “Enter” key recently broke, it looked to be the death of the device. But luckily, repair specialists still exist in Germany. It seems that my family members are not the only 196 C aficionados still out there.

Got a favorite gadget memory from back in the day? We’re currently accepting your submissions.