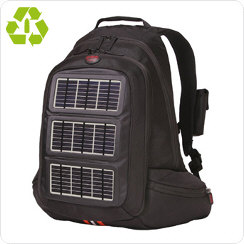 Articles such as US Set to Lead the World in Solar Power and Do Not Pass Go – Go Directly to Solar Power highlight how solar power as an alternate source of energy is positively washing over the nation.

We regularly recommend solar powered gear such as the Solio Universal Hybrid Solar Charger and many more in 12 Gadgets That Harness the Power of the Sun.

But like many of you, I’ve been curious about solar technology and had so many questions.

– How viable is it when used with everyday appliances?

– How would this work when I’m in a colder climate?

So I decided to put one of the leading solar-powered gear out there – the Voltaic Backpack – to the test. 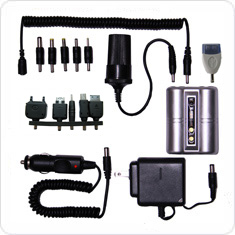 When I first opened the package, I was initially thrown off by the amount of electronics that came with it.

Once I cracked open the manual, it all made sense.  The solar panels on the front of the bag generate up to 4 watts of energy. The included battery is meant to store up captured solar energy and provides 55 hours per charge for later use. The adaptors are used to charge a myriad of devices from cellphones and media players to laptops and GPS units within the bag.

To fully charge the battery from direct sunlight, the bag must be placed angled towards the sun. This takes upwards of 8 to 10 hours to fully charge it. The car  and AC chargers are provided to be used on those days when the sun remains hidden.

I left the backpack out of the porch facing sunlight for 4-5 hours, and the light indicator at the top of the bag that denotes whether the solar panels were generating a charge or not, was illuminated.

But my battery never fully charged – probably due to user error. Setting the bag up wasn’t as intuitive as I’d initially expected it to be, but with some trial and error, you can get the battery feeding from the solar panels correctly. 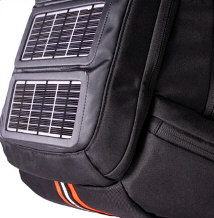 The bag is very attractive and the solar panels are laid out in such a way that they don’t distract from the overall look of the backpack.

The included adaptors and chargers are actually an advantage, allowing you to connect and power pretty much any small device you can think of.

The fact that it requires 8-10 hours of direct sunlight to fully charge the battery feels like a downside.

However, Voltaic provides alternate ways to charge the battery as well such as the AC and car chargers.

For a laptop backpack, it is a little pricey be to quickly adopted as the preferred way of charging devices as well as a replacement for carrying your laptop.

I was struck by the superb quality of the backpack. Its shell is made from recycled PET (soda bottles) which makes it extra sturdy and water resistant while still remaining super lightweight.

Voltaic is definitely on to something much bigger with its innovative line of energy efficient products.

Detailed specifications of the backpack can be found here. Also visit Voltaic Systems for a complete catalog of solar powered bags and gear.