View all travel news
Top Destinations
Top CitiesView All Destinations
Trending Regions
Trending Cities
Load More
This past April, I returned home from a three-month trip, but by May, I was already dreaming of my next destination and new places to photograph.

For inspiration, I started catching up with my favorite travel blogs on my newly purchased iPad 2. Along the way, I stumbled on news that National Geographic had released a new iPad application called “50 Places of a Lifetime.” I made a mental note to look into it further.

A few days later, an opportunity to review the app for Matador came, so I jumped on it and received a complimentary promo code to download the app.

The new iPad application is a collection of the world’s “50 greatest places”, according to National Geographic Traveler. It’s a special edition, originating from a list compiled for print in 1999, but now updated digitally. According to editor-in-chief Keith Bellows’ welcome note, with this app “you get to more deeply explore the world’s greatest destinations” through articles, galleries, videos, and panorama shots.

And that you do.

“The 50 Greatest Destinations: From Urban Spaces to World Wonders” 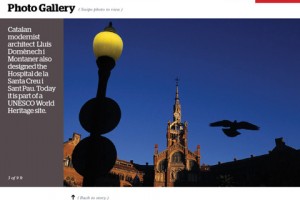 The 50 destinations are split into five categories: Urban Spaces, Wild Places, Paradise Found, Country Unbound, and World Wonders. And each of these categories consists of ten places.

Turn your iPad2 horizontally and the layout is a visual feast from start to finish. A slideshow of 50 of the world’s most stunning places – each place with its own feature article, photographs, video clips and sometimes 360-degree panoramic views.

Even better, the app has an interactive checklist allowing readers to click on the “check” mark embedded in each article for places to add to their dream list, which is compiled at the end of the app.

From there, tapping on the “next” arrow reveals the first featured “Urban Space”: New York. An article written by Andrew McCarthy introduces the city in all of about six paragraphs total.

In true National Geographic style, the article is accompanied by vibrant photos throughout. The iPad lends itself nicely to this “presentation” format: all one has to do to read about the place is use a finger to scroll through the pages vertically; like reading a slideshow but without losing the flow of text.

Also embedded in the article is a small “fast facts” slideshow on the city. And at the end is a video “to watch New York from dawn to dusk.” At the tap of a finger, a Beethoven symphony takes over again and the video reveals the City – buildings, yellow taxis speeding by, Grand Central and other landmarks, and at night, city lights, skyscrapers and Times Square. A really cool video snapshot and short enough to get a sense of place.

I decided it would be fun to check out a destination that I’d want to add to my “places I want to go “ checklist. So I scroll to the right on my iPad and I see “Urban Space“: Istanbul. Again the format is the same – an article with a few photos, including some that fill an entire screen. I am excited to scroll down to the video. This one is of “an ice cream sales pitch” – a street scene with children, laughing at an open-air ice cream shop with a vendor swinging the ice cream around, while Turkish music plays in the street. They are speaking in Turkish but the feeling of place is there. 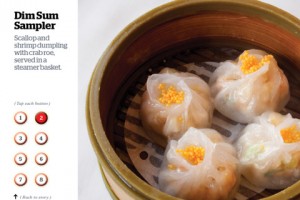 Other cities – like Barcelona – also have an entire photo gallery embedded, rather than just a few accompanying article shots.

A convenient scroll tab feature at the bottom of the iPad screen allows readers to skip through the 50 places quickly, and stop at the ones of interest to them.

In the “Wild Places” category are stunning areas such as the Serengeti, Papua New Guinea, the Amazon, The Grand Canyon, and Antarctica among others. Some – like the Amazon – have a video clip while other places like the Grand Canyon have a “wide view” image – a tap on the image enlarges it, and then a swipe, pinch and turn around with one’s fingers allows for a 360-degree tour. It’s almost like being there amid the massive rock formations.

In the Sahara, you can watch a short video of a photographer floating over the desert in a paraglider to the get the high shots, while listening to his narrative.

At the end of the app is the checklist compilation. A column appears with all 50 places and readers can drag any “place” icon from the 50 list onto two adjacent columns: “Places I’ve been” or “Places I want to visit.” 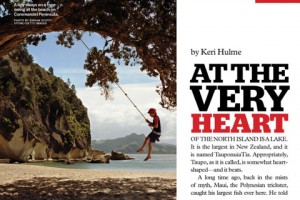 The app is user-friendly, and the information presented – in both visual, audio and writing format – is extremely appealing. The articles are short and are written or illustrated by top National Geographic writers and photographers.

And lastly, the app works offline once downloaded. This made me think of all the folks I meet in my travels, especially in the countryside, who have never traveled anywhere but would love to, and how wonderful it would be to sit and share with them this virtual rendition of some the world’s most beautiful places.

What Could Be Improved

If you’re a globetrotter and you’ve already visited most of the world, you may not have much need to reference back to the app. But it’s still a nice keepsake, especially given the quality of the material and at the limited introductory price of $1.99.

Traveler’s 50 Places of a Lifetime app is a brilliant tool for those who haven’t traveled much but would like to and need the kind of inspiration that images of National Geographic trigger. It’s also a great reminder of things that make this world an amazing place to explore.