01:00 May 5, 2020
Top Countries
Top CitiesView All Destinations
Trending Countries
Trending Cities
Load More
Of all the talk of “iPhone killers” that has dominated the blogosphere lately, nothing has caused quite the splash of the Google Phone – which most considered just a rumor until recently.
class> 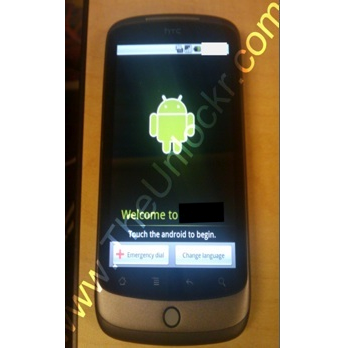 As far as smartphone operating systems go, it hasn’t been the iPhone, but rather Android dominating the gadget blogs this holiday season. TechCrunch stated that the day of the Google Phone was looming a month ago – and now it seems they were right.

As per usual lately, the news broke with a tweet, or rather, several tweets, from those claiming to have their hands on the unlocked phone. The frenzy was followed by a post on the Google Mobile Blog:

We recently came up with the concept of a mobile lab, which is a device that combines innovative hardware from a partner with software that runs on Android to experiment with new mobile features and capabilities, and we shared this device with Google employees across the globe.

How vague of you, Google. But the guys at TechCrunch seem to know what’s going on. Here’s what they predict:

It will be called the Google Phone and will launch in early January, 2010. It won’t be sold by any one carrier, but instead will be an unlocked GSM phone. In the U.S., that means T-Mobile and possibly AT&T, whose exclusivity deal with the iPhone is about to run out. It will be running Android 2.1. 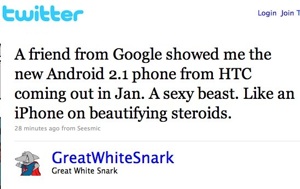 The phone is “really, really fast,” says someone who has seen one in action. It runs on a Snapdragon chip, has a super high-resolution OLED touchscreen, is thinner than the iPhone, has no keyboard, and two mics. The mic on the back of the phone helps eliminate background noise, and it also has a “weirdly” large camera for a phone. And if you don’t like the touchscreen keyboard, a voice-to-text feature is supposed to let you dictate emails and notes by speaking directly into the phone.

What I’m curious about is the physical keyboard, or lack thereof – while I’m actually partial to the touchscreen keyboard, many Droid fans refuse to consider a phone without real buttons to push. I can’t see a voice-to-text feature, no matter how great, satisfying that need.

Either way, my plan is to sit back and watch Google and Apple battle it out for world smartphone domination.