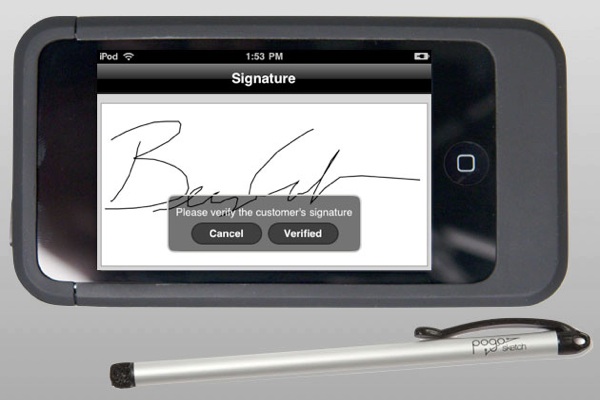 In the ongoing battle of Mac vs. PC, it seems odd that the workers in those blindingly white Apple stores surrounded by slick Macbooks and iPhones would use…the horrors…a Microsoft product to help customers. But alas, in the past they have indeed been employing Windows CE-based handheld computers in the checkout line. Of course, like Vista, there were complaints of the usual crashes and general tortoise-like operation.

An app, of course. According to Wired, the workers now use an iPod Touch with an application called EasyPay Touch to scan items, read credit cards, issue returns, and more. Much like the excitement of using your iPhone to, say, print a document on the printer in the next room, this Friday workers and customers alike will get to geek out over tapping “cash” on the Touch and opening a register drawer on the other side of the store. (Does anyone else see a potential safety issue here?)

Wired points out a bit of irony – to accept signatures, the Touch needs a stylus, which Wired themselves named “The Most Useless iPhone Accessory. Ever.” two years ago. Still, it seems a small price to pay for yet another shinier, sexier replacement for a Microsoft product. Even if it is only the employees that get to use it.

6 Colorado ski areas that will surprise you