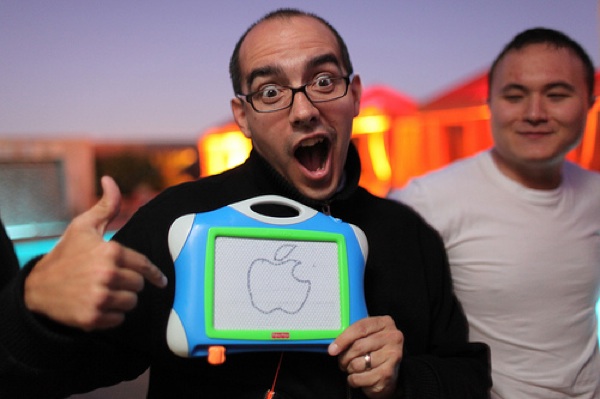 The iPad runs on iPhone OS and not OS X – Apple’s evil plot to control how you use computers?

Tom Conlon at Popular Science has a theory. The newly released iPad, which runs on iPhone OS, doesn’t have Flash, a camera, blah blah blah, is Apple’s way of pushing that kind of more restrictive, closed operating system on tablets – the future of computers.

You can do on the iPad only what Apple allows. And if you are allowed to do something, you have to go through iTunes or MobileMe to do it. Apple makes a nice chunk of change on everything you do, but more importantly it gets to play gatekeeper.

In OS X, Apple can’t block you from using apps it doesn’t like or competes with. But it famously blocks you from doing so on the iPhone and now presumably on the iPad, which is connected to the same App Store. How long before it blocks movies, TV shows, songs, books and even web sites? Scoff now, but don’t be so naïve as to believe that this isn’t possible.

Imagine what life would be like if your personal computer functioned like the iPhone. You’d have to buy all your programs through Apple, and if Apple didn’t want you using something like, say, Google Voice, Abobe Flash or Microsoft Word, then you’d be out of luck. Oh, and multitasking would be a thing of the past. Sounds great, doesn’t it?

Interesting thoughts. He does make me wonder if and when Apple plans on releasing a version of the iPad that runs OS X, since that would be essential in my decision to eventually replace my laptop with this device. Note that I said my decision – because what I need out of my laptop is not necessarily what the next guy needs. Something a few folks in his comments section clearly don’t understand:

Apple products are for stupid people. These products are designed for people who can’t operate anything but a simple interface and don’t understand the basics of computing. 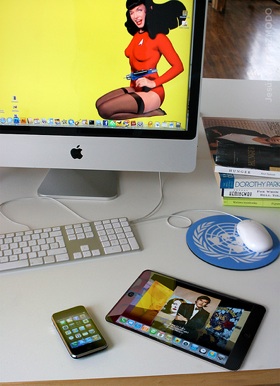 Hilarious. I use my Macbook to write fiction and non fiction, to compose music, to blog, to stay in touch and connect with family and friends, to network…but no, I’m not a programmer. I suppose I don’t really understand the “basics of computing.” Therefore, I guess, I am a stupid person.

Another commenter summed up my feelings rather nicely:

If all you do is browse the web, check Facebook, and watch Youtube vids, and you want to do it in style, then the iPad is for you. If you need to work and multitask then get Macbook with OS X. Do you really think OS X will be tanked one day?….Apple employees need to multitask, too!

Well, yeah. Sorry commenter #1, this isn’t in defense of Apple, this is in defense of people. People who use computers for those features and only those features are not stupid. We don’t want to build our own computers. We’re very impressed that you can do it – honestly – but why can’t people with varying levels of technological ability have something that runs smoothly and is designed for them?

And while I think Mr. Conlon brought up some excellent points in the original article, I’m not quite sure we’re facing a future with Steve Jobs playing Big Brother. Realistically, if anyone is buying an iPad right now to replace their laptop, than that’s simply because the iPad already does everything they ever wanted in a computer. And that’s okay.

Maybe Apple will release an iPad with OS X, and more of us will consider switching. Maybe they won’t, and will continue to stick to selling the iPad to customers who simply like gadgets but aren’t looking for a laptop replacement.

A plot for world domination? Or just another toy? Share your thoughts on Apple’s decision in the comments below!