Always in the food shadow of Los Angeles, Santa Barbara deserves to be a foodie destination in its own right. The restaurants below show why. 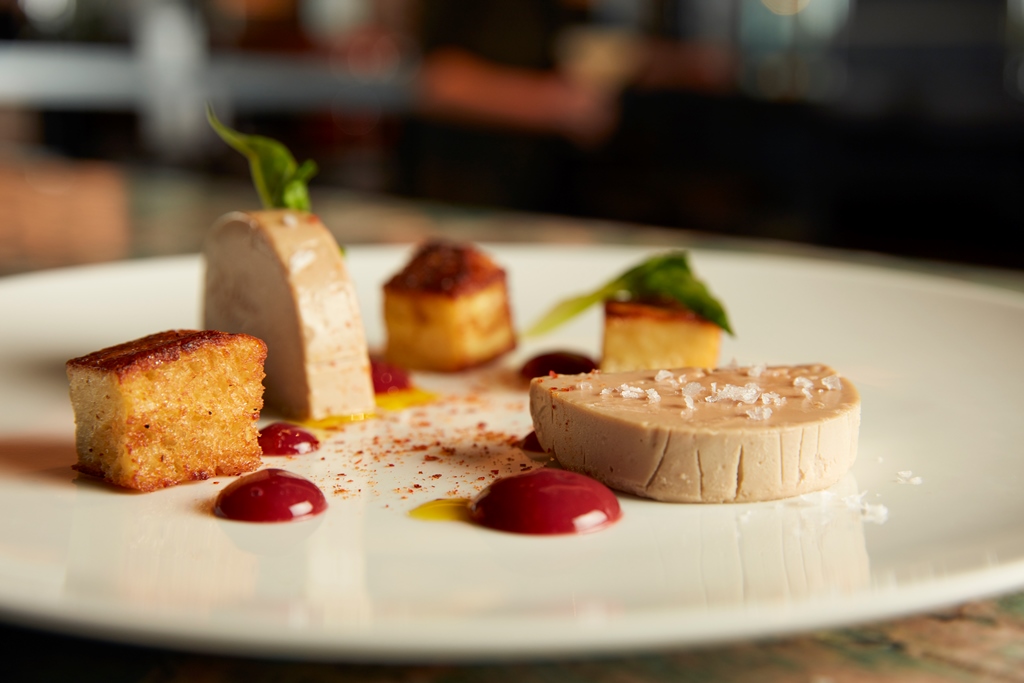 Located within the Bacara Resort & Spa and overlooking the Santa Barbara coastline, sits Angel Oak. This modern steak and seafood restaurant is run by classically-trained Parisian Executive Chef Vincent Lesage. The menu includes items such as Santa Barbara’s famous local uni, as well as items from the certified Kobe and dry-aged beef program. At the bar, order the California Lookout, using California-produced citrus vodka, or choose from one of the 12,000 bottles from the wine cellar. Whether a special occasion or an after-dinner dessert and glass of wine, Angel Oak will not disappoint for those looking for local ingredients paired with innovative techniques.

Recently opened in the new Waterline mixed-use space in Santa Barbara’s Funk Zone neighborhood, Nook offers redefined soul food with global inspirations. Owned by Master Chef Norbert Schulz, who first opened Norbert’s in Santa Barbara 35 years ago. Since then, they’ve opened and been partners of more than five other restaurants in the city. Nook is their newest venture and features high-quality food in a casual setting. Menu items include a Duck Foie Gras Burger, House Made Bratwurst, and Purple Potatoe Waffle & Fried Chicken. Nook shares the same space as brewery Lama Dog, so there will always be a great beer to pair with chef Norbert’s German pretzels.

While Yoichi’s has been in Santa Barbara almost one year, they are still converting newcomers to the concept of kaiseki, i.e. traditional, multi-course Japanese dinner. The intention of kaiseki is meticulous preparation to showcase each ingredient in its pure form, so the item tastes as it is intended to by nature. Chef Yoichi Kawabata and wife Mogi Kawabata are serving up a seven-course kaiseki dinner for $100, using seasonal ingredients cooked in traditional Japanese fashion. The courses offered include appetizers, soup, sashimi, a grilled dish, a steamed and simmered dish, sushi and dessert. To pair, they offer a curated menu of sake, beer, and wine.

Arguably the top restaurant in Santa Barbara currently, The Lark is no stranger to top local restaurant lists. Since 2013, they have been serving locally-sourced and responsibly grown cuisine from the Central Coast. Located in the Funk Zone neighborhood, architect Doug Washington (of San Francisco’s Town Hall and Salt House) has created a beautiful indoor/outdoor 130-seat space. Served family style and intended for sharing, menu items include Crispy Brussel Sprouts, Grilled Spanish Octopus, and Roasted Bone Marrow. At the bar, choose from classics or crafted cocktails like the Lark Pisco Sour, or choose from the many beer and wine offerings.

Lucky Penny is The Lark’s all-day offshoot, offering wood-fired pizza, salad, and sandwiches using local, seasonal ingredients. In the mornings, they feature fresh-brewed coffee with homemade pastries and baked eggs. Located around the corner from The Lark in the Funk Zone, Lucky Penny stands on its own both physically and with their impressive menu. Try the Milpas Pizza, made with chorizo, fingerling potatoes, egg, cotija, cilantro and a spicy tomatillo marinara. Coffee, beer, and wine are also on the menu.

With two locations in Santa Barbara Harbour and Goleta Camino Real, On The Alley serves up to-go style burgers, sandwiches, salads, and tacos, as well as Brophy Bros. oysters and desserts. From the group behind Brophy Bros, Benchmark Eatery, Farmer Boy and The Cliff Room, On the Alley is also open for quick grab-n-go breakfasts of everything from burritos to waffles to breakfast burgers. Order at the outdoor window and grab a seat at the communal tables, your order will be called when ready. The menu also features kid-friendly fare, and all food is under $11. On the Alley is a great option for casual, family meals on a typical Santa Barbara sunny day.

Santa Barbara Shellfish CompanySanta Barbara, United StatesA small restaurant with bar-style seating at the end of Santa Barbara pier. Come here to get your seafood fix while watching sailboats coming in to dock for the night at sunset. We splurged on the king crab (among other things!) and it was perfect.

Having locations in Santa Barbara, Santa Monica, and Hollywood make The Hungry Cat easily accessible for locals across LA and Santa Barbara counties. Speaking to its name, since 2005 The Hungry Cat has specialized in seafood, offering seasonal plates in the highest quality. Chef and owner David Lentz, originally from Maryland, features brunch and dinner menus with raw bar selections, shooters, seafood platters and traditional plates. For brunch, look for the Peanut Butter French Toast and bottomless mimosas. For dinner, go for the Chorizo N’ Clams. The cocktail menu also offers oyster shooters as well as rotating beers and original cocktails like the ‘Fatherly Advice’. The Hungry Cat is a great choice for fresh, local seafood and great cocktails in a casual setting.

Finch and Fork describe their food simply as “Santa Barbara on a plate”. Located in downtown Santa Barbara, Chef James Siao keeps the dishes simple and market fresh by using local seafood, meats, and produce. They offer a daily special in addition to their menus, like Tuesday’s Buttermilk Fried Chicken or Sunday’s Slow Roasted Prime Rib. The elevated All-American hotspot also offers handcrafted cocktails and local beer and wine. For cocktails, go for the Grass Kilt, which is made using scotch and coconut water. They are open for breakfast, weekend brunch, lunch, dinner and after hours small plates and cocktails.

Another downtown Santa Barbara hotspot is Bouchon, which sits right off State Street and offers an understated elegance in both their atmosphere and cuisine. Executive Chef Greg Murphy features a seasonally-changing menu of locally-sourced foods and wines, staying true to the farm-to-table mentality. They have received accolades from Wine Spectator, Food&Wine and earned Trip Advisor’s “Hall of Fame” status. The atmosphere is both inviting and intimate, and the attention to service is unmatched. For dinner, try the Grilled Snake River American Wagyu Center-Cut Ribeye (season depending), along with the Fig & Honey Galette for dessert. Their Santa Barbara County specific wine list is beautifully curated, with almost 200 wines to choose from.

10 of the Most Stylish Boutique Hotels in Santa Barbara

How To Have the Perfect Outdoor Weekend in Santa Barbara