The open road has way more pro’s than con’s, but the holidays might be a time when you wish you were around your friends and family, stuffing your face with a buffet of seemingly endless food. Let’s face it, you’re never going to whip up a roast turkey with all the trimmings on a two burner propane stove, so here are a few ways to get a small taste of being ‘home for the holidays’ whilst cooking on the road.

So easy and so tasty. First things first, get the fire raging under a grill grate.

Now mix ½ cup of brown sugar with 1/4 cup wholegrain mustard, 3 tbs of honey and a splash of vinegar.

From a cooked, un-cut ham cut one nice ½ inch steak for each friend.

Once the fire is glowing embers, brush the ham with some olive oil and throw on the grate. Grill each side for a few minutes, brush with the glaze on both sides and cook until sticky and caramelized.

2. Turkey and all the trimmings burgers

Take a pound of raw ground turkey, a ½ pound of raw Italian sausage, ½ cup of Italian breadcrumbs and mix with an egg to bind.

Grill them until charred but juicy, whilst they are cooking mix a bag of stuffing with hot water and let it stand.

Serve the burgers on a bun spread with cranberry sauce, mayo and a scoop of stuffing

Turkey dinner steaks in no time at all. Cut 1-inch thick cutlets from a whole raw turkey breast.

Brush with olive oil, salt and pepper and get them on a hot grill.

Whilst they cook, take a stick of butter and 8 sage leaves and place in a saucepan over the heat. Cook the butter until bubbly and starting to brown.

Serve the turkey with a spoon of sage butter and a dollop of cranberry sauce. 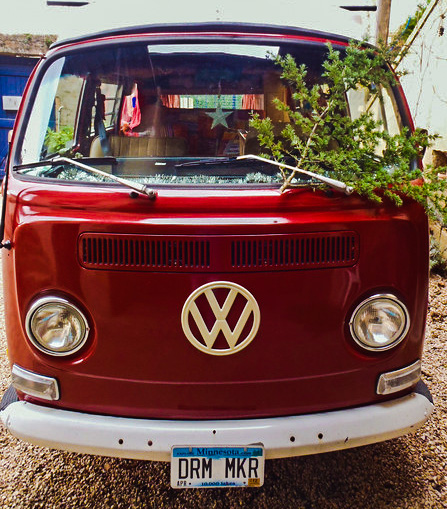 Who doesn’t like one pot cooking, especially whilst camping? This will give you all the holiday flavors in one bite.

Take a bag of stuffing and mix with hot water using the directions on the bag.

Smoosh a ½ layer of stuffing on the bottom of the pan and halfway up the sides.

Fill the stuffing in this order: a layer of cranberry sauce, a layer of cooked turkey, pre-made gravy, cooked or instant mashed potatoes, cooked or frozen spinach and then create a lid with more stuffing.

Cook over a fire until the bottom is crispy and the inside is hot — about 40 minutes.

Wrap whole yams in a few layers of tin foil and throw in the flames, turn every 5 minutes until cooked.

Cut them open and brush with a mixture made with melted butter, cinnamon, nutmeg and salt.

Bacon is the star of the show in this skillet dish, remember to bring a grater.

Get a cast iron pan or good skillet hot over a fire or gas burner and add a good amount of chopped bacon.

Whilst it’s cooking, grate onion, carrot, celery root, parsnip and sweet potato into a dish. Season with salt and pepper and add to the bacon.

Cook until the bottom is nice and brown and either flip it over to cook the other side or stir it all together.

Take 2 squares of heavy-duty foil per person and spray with cooking spray.

Now add a handful of cooked green beans or canned, a few tablespoons of cream of mushroom soup and a good sprinkling of crispy onions.

Season, close and cook in the coals for 8-10 minutes.

Traveling over the holidays? Check these 34 holiday travel hacks

You will need a clean empty tin can per person for this, so make sure you save them beforehand.

Spray each can with some cooking spray and fill up a third of the way with your favorite pumpkin pie filling recipe (you can make this in advance).

Now line the cans up next to the fire after pushing the coals to one side.

Turn every 5 minutes until cooked, the time will depend on how hot your fire is.

Toast some chopped pecans in a skillet and add a spoon or two to each can.

Serve with some cold heavy whipping cream or some squirt spray stuff.

Make sure you make extra just for drinking. Take a bottle of red wine, ½ cup brown sugar, 3 cinnamon sticks, 4 cloves, 6 all spice, 6 black peppercorns and the peel and juice from a lemon and an orange and bring to a boil over the fire or your camp-stove.

Cook your fruit until tender and serve with whipped cream. The fruits that work best are plums, pears, apples and apricots.

In England we eat mince pies at Christmas, these are flaky pastries filled with a mix of dried fruits usually cooked in whiskey. You should be able to find jarred mincemeat at most grocery stores, if not, simply take a mixture of dried fruit and simmer it with orange juice, whiskey and a touch of brown sugar until syrupy.

Fill each half with mincemeat and sandwich the apple back together.

Cook directly in the coals until softened and serve with loads of custard or cream. 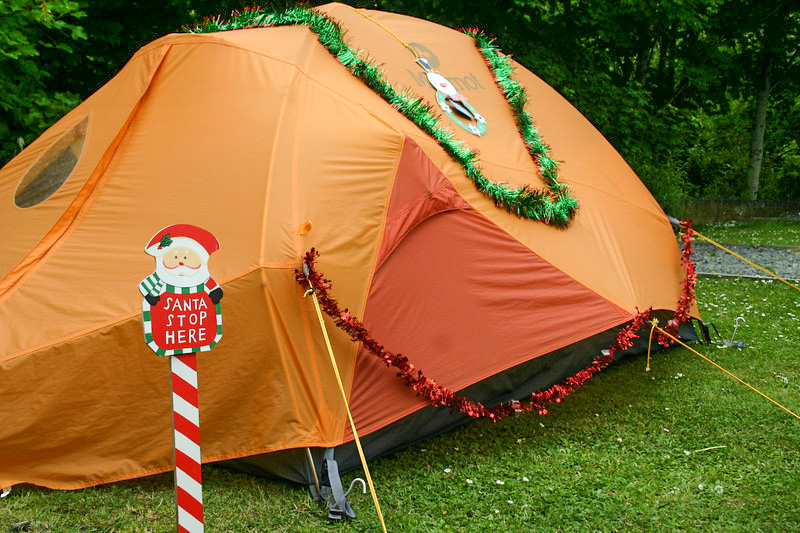 The After Dinner Sippers

So easy and you can tailor it by mixing your favorite hot chocolate with any of the following: Mardi Gras: Bourbon, Me Laddy: Baileys, North Pole: Crème de menthe, Italian Stallion: Amaretto, The Safari: Amarula, The Scot’s friend: Whiskey.

Be warned, do not make one with all the booze in it.

Warm a liter of apple cider with 3 cinnamon sticks, 4 whole all spice and a dash of nutmeg. Mix in some bourbon and a ¼ cup brown sugar. That’ll warm you up.

Take some leftover stuffing and mix with some beaten egg.

Make burger sized patties and cook in butter until crispy on both sides.

Top with a fried egg and of course gravy if you have it.

You will need the fire going for this one so make sure it burns down to embers before you start cooking.

Beat up eggs and mix in chopped up leftover vegetables (especially from the root vegetable hash) now mix in ricotta and shredded cheddar.

Spray a cast iron pan or use a non-stick skillet. Get the pan hot and pour in the mixture. Cover with foil and cook directly on a thin layer of embers until just firm.

A crowd pleasure and a great way to use up any leftover canned pumpkin puree.

Take 15 ounces of pumpkin, a can of evaporated milk, a teaspoon of mixed spice and 2 eggs.

Beat together with instant pancake mix until it is the right consistency. Cook ‘em up and serve with maple syrup, bacon and a good dollop of butter.

Tagged
Food + Drink Religion
What did you think of this story?
Meh
Good
Awesome