Lady Piazza has been a patient of the top psychiatrists in New York. She has been prescribed Xanax, Zoloft, and Valium. She is a natural red head, is often anxious, reserved, and enjoys listening to public radio.

Lady Piazza is a dog. 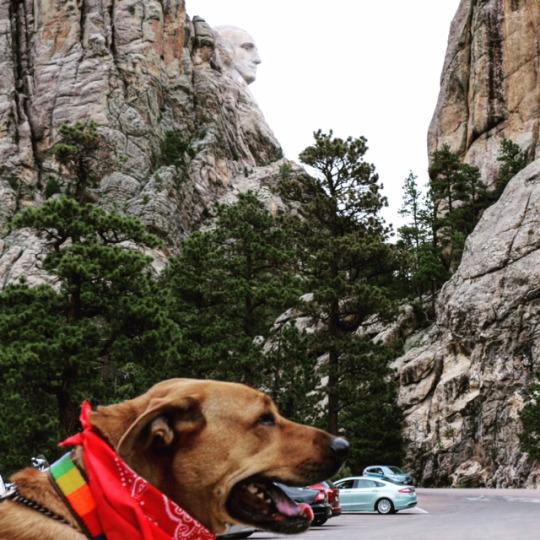 She’s a large girl, possibly a Rhodesian ridgeback/Labrador mix, born somewhere in Brooklyn, tossed aside very early in life and rescued at 5 months old by me. The kind folks at the rescue organization told me she would be about 40 pounds when fully grown. She is now more than double that. Since then she has had a pretty plum lifestyle that involves lots of runs, treats, walks in the park, swims in the ocean, and prescription medication.

Despite living the life, Lady Piazza has all kinds of issues. She’s afraid of small dogs, particularly chihuahuas, loud noises upset her and she dislikes it when strangers use baby talk in her presence. She dislikes most strangers. And so when I knew I had to relocate the two of us across the country in a move to San Francisco, I was loath to bring her on a plane. I’ve heard that traveling as cargo isn’t as bad for dogs as we all think that it is, but I just didn’t have the heart to pack up my anxious pooch and place her in the same storage container with my duffel bag.

That’s the big reason that I ended up taking 10 days to drive across the country in my little yellow Fiat with my really big dog. 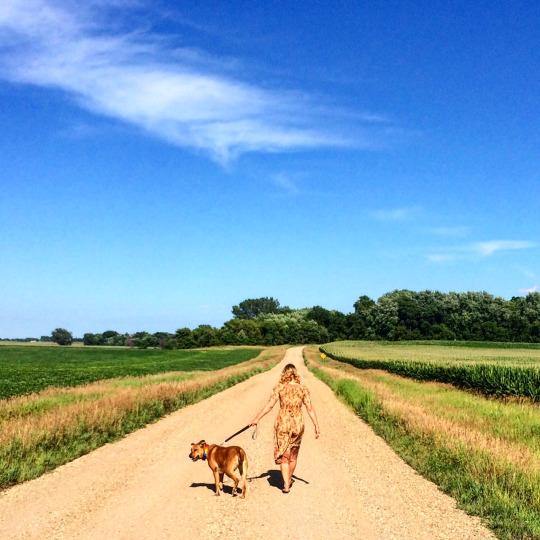 I knew it would be a better (though longer) trip than the flight for Lady, but I had no idea how good it would be for her until we hit the open road together.

When John Steinbeck famously traveled with his pretentious poodle Charley he took him in a large camper that still felt cramped.

Then there was the issue of accommodation. You can’t typically stop in the local charming Bed & Breakfast with a large beast and ask for a room. I was worried it would be more difficult to embrace the spontaneity of the road. I was reassured that the majority of motel chains, Red Roof Inn, Quality Inn, Motel 6, Super 8 etc. often have an incredibly welcoming dog policy.

I had no reason to fret. For years scientists have debated whether or not dogs can actually smile. But the ASPCA does say that when the facial muscles are relaxed and the corners of the mouth are turned upwards, a dog may be expressing happiness with their face. If that is indeed the case, Lady Piazza has never been happier than she was during that trip through 13 states and three time zones. She didn’t once get scared or anxious, even when we fretted over a tornado warning in Indiana. She seemed to delight in three things during the day, watching the road we left behind us, napping, and exploring new roadside motels rife with smells. Enjoying the Red Roof Inn Plus outside of Pittsburgh. (Photo: Jo Piazza)

She’s typically timid with strangers, but she’d rush up to greet people we met at rest stops. Her tail was no longer tucked between her legs when she saw another dog. Rather, it wagged with the ferocity of our windshield wipers during a hailstorm in Ohio.

Lady loved that car so much that she never wanted to leave it. She grew so concerned that we might get into the car without her that when we opened the door in the morning, she would shove past us and bound directly for it, sitting patiently beside the passenger door.

On the road, Lady could do all of the things that dogs are meant to do but can’t when they live in a small apartment in a big city. When we went to visit Walnut Grove, Minn., once home to the author and pioneer Laura Ingalls Wilder, Lady jumped right into Plum Creek, where Laura, Ma, and Pa once lived in a dugout. 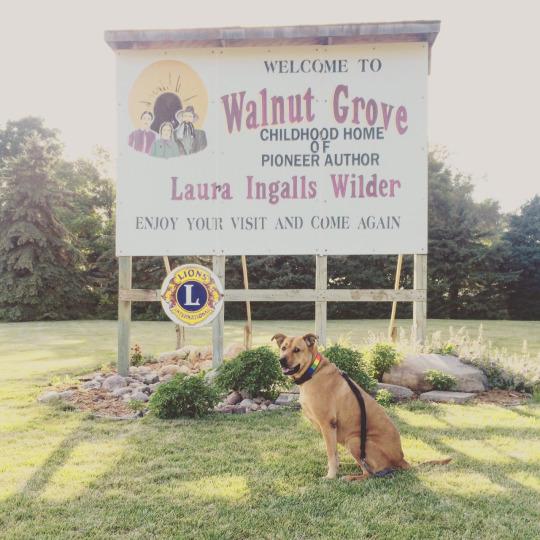 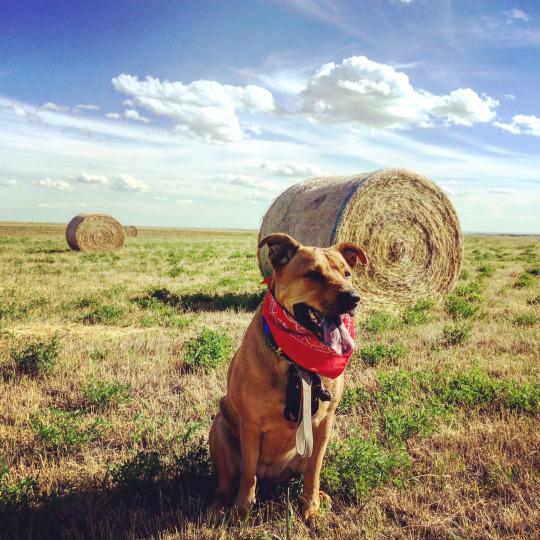 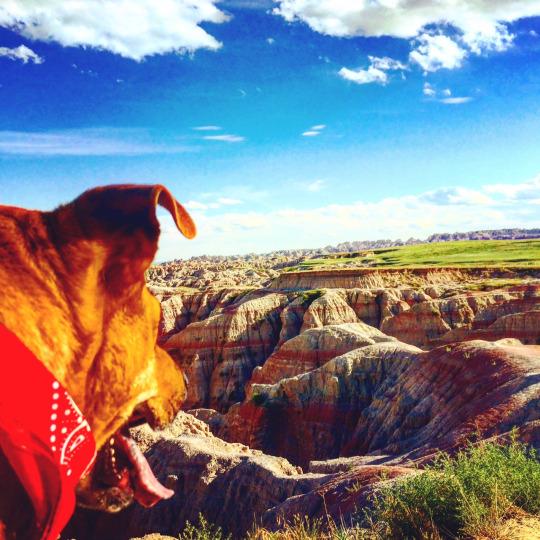 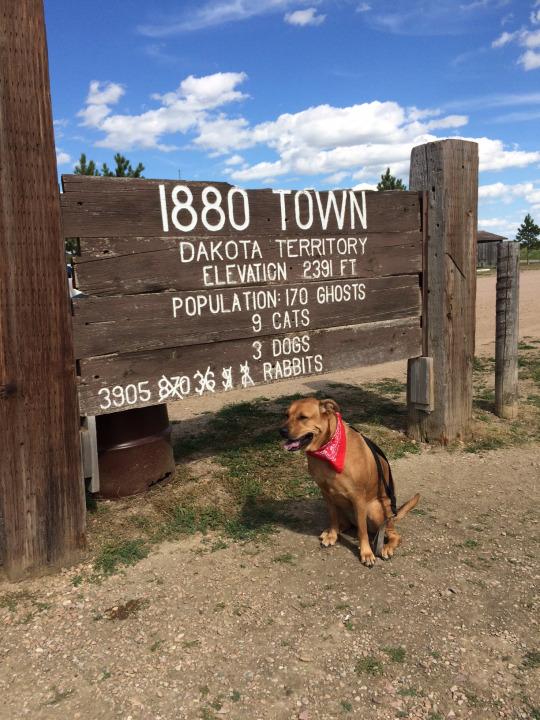 She frolicked through bales of hay on the side of the road in Wisconsin and led us through the Badlands of South Dakota.

In Wyoming we went on our first real hike, in the Cloud Peak Wilderness of Bighorn National Forest. She bounded 10 yards ahead of me at all times, scouting the path and leaping over boulders. 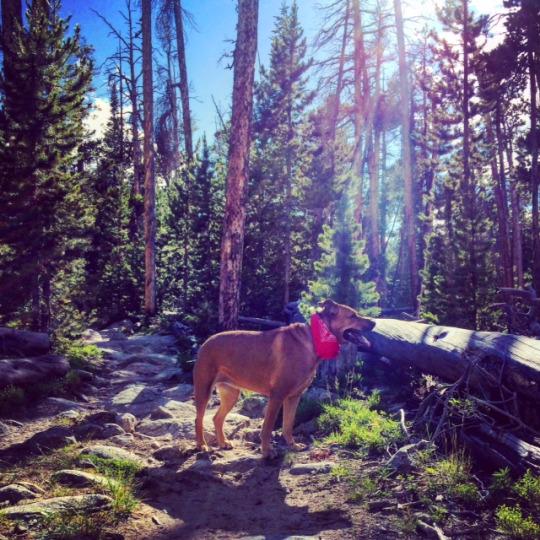 As we neared our destination, I rewarded Lady with one final perk of the road, an In-N-Out burger that she devoured in one large bite.

And now that we are settling into our new home in Alamo Square, Lady Piazza seems like a new dog. She’s less anxious than she was in New York, more apt to stare out the window rather than lie around and mope. She remains excited about meeting new people and seems generally less afraid of the big bad world.

I don’t know if this would be the case had we packed her in a crate and flown her to her new coast. A taste of the open road seemed to perfectly prepare Lady Piazza for her new life as a West Coast pooch. 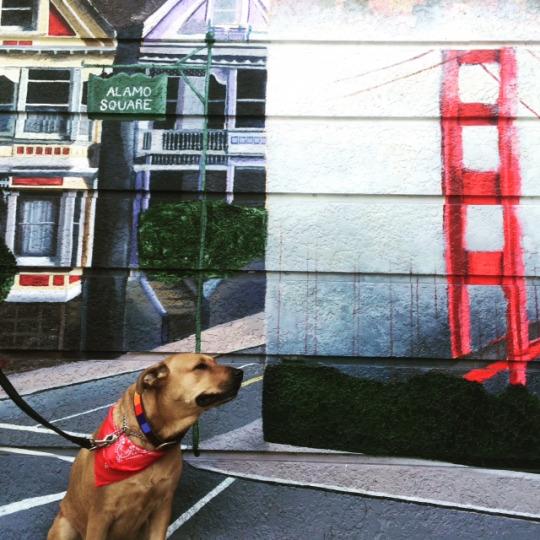 Checking out her new home. Photo by the author.

This article originally appeared on Yahoo!Travel and is republished here with permission.

The truth about artificial vanilla extract (and why you should always splurge for pure)
11 of the deadliest concert disasters in recent history
‘The Great British Baking Show: Holidays’ promises a joyful celebration of festive treats
Woman gives out vodka shots in Miami airport after being stopped by airport security
Watch: Serial 1’s new e-bike etiquette video is a hilarious lesson in sharing the road

10 ways to celebrate the holidays in San Francisco