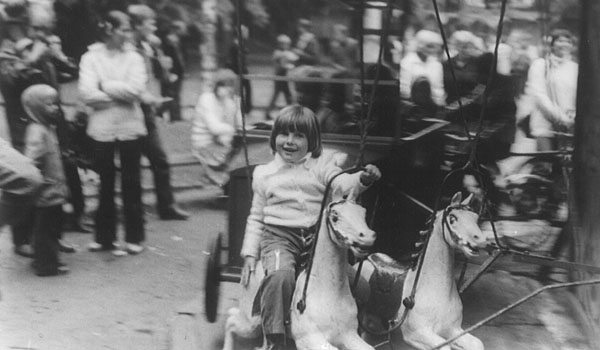 The author’s wife enjoying her childhood

I always love hearing my wife’s stories about childhood life in East Germany. She was 10 years old when she left for the West before the wall came down (yes, it was possible to leave — just very difficult). 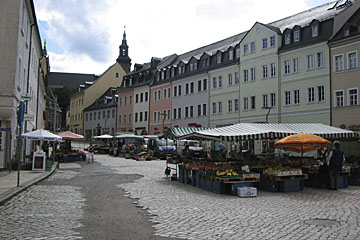 Modern Schneeberg, where the author’s wife grew up

I was finally able to visualize her stories on a trip to Germany in 2007. The DDR museum in Dresden is like stepping into a time machine — separate and fully furnished rooms of typical houses and offices rekindled strong memories for her and provided me with a glimpse into the past. (Another entertaining look back is the film Goodbye Lenin!)

After reading another traveler’s account of his brief visit to East Berlin in 1987, I thought I’d start peppering her with more questions about what it was like to grow up in the East. The below anecdotes are strictly from her memory, the way she remembered things. I didn’t want to mess that up with any research.

Childhood life in East Germany in the 80s

1. There were no bananas. You could only get them once or twice a year, and you’d only be notified of their availability by word of mouth. So you’d have to rush to the veggie store (not a veggie store as we know it — just cabbages, potatoes…anything grown locally) and stand in line to get your one banana per person in your household. 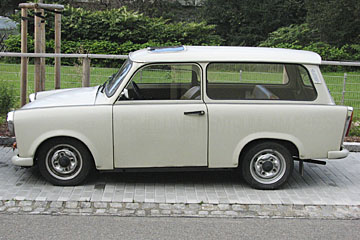 To stretch the rations, her mum would quarter the banana, slice it thinly and serve it on bread to her and her sister.

2. You couldn’t buy strawberries from a store. If you wanted them you had to go and work in the fields picking them for hours. You were allowed to buy a certain portion of the ones you picked.

She remembers her mum telling her, “Don’t worry about picking, just eat as many as you can!”

3. Luxury items were priced way out of proportion to people’s salaries. A black and white TV might cost 10 times a person’s monthly salary; a 200g bag of coffee would cost around $20.

4. If you wanted to buy a car — most likely the ubiquitous Trabant — you had to wait years. Like, 10-12 years. So people who turned 16 (although you had to be 18 to drive) would put their orders in to get their mitts on a car when they were in their late 20s.

5. She remembers visiting the Baltic Sea twice in her childhood for vacation. They didn’t have much choice of where they could go. Holiday homes were usually linked and subsidized through work and you could obtain use of them once in a while.

The teacher would say, “Be prepared!”, and the students would reply, “Always prepared!” before giving the salute, and then the day began.

6. You could only watch one of a few state channels, but radio waves know no walls (well, except maybe lead ones), so those close to the border were able to pick up signals from the West.

Luckily, her family was able to, so they had some access to the West’s news. Obviously, this was all very hush hush.

7. Every child was part of the Pioneers: Grades 1-4 were Blue Pioneers, 5-7 were Red Pioneers, and grades 8-10 graduated to the Free German Youth (FDJ).

When you first arrived to school, all the students would stand at attention and salute the teacher.

The teacher would say, “Be prepared!”, and the students would reply, “Always prepared!” before giving the salute, and then the day began.

Every 7 October, she — along with all the other Pioneers — would join in the parade commemorating the birth of the GDR. They dressed up in their Pioneer outfits, waved flags and flowers, and cheered.

8. Her home had no bathtub or shower, only a sink and a toilet. She was fortunate enough to have a grandma with a bath, so once a week they would make their way there. Hot water didn’t just flow out of the taps though.

The water was heated by charcoal stove. A big water tank sat next to the tub with a little stove underneath where charcoal had to be shoveled in. The charcoal was delivered a few times per year by a big truck. They would leave a big pile of it and the residents had to shovel their portion of the coal into their allotted space in the basement.

Even at her own house without tub or shower, they needed to heat the water this way. They lived on the fifth floor, so she remembers having to walk all the way down to the basement with a couple of buckets and back up with them topped full of charcoal.

It wasn’t all trying though. Everyone had a job, school lunches were free, after-school care was free, people were generally happy, necessities were extremely cheap, and there was more community spirit than there is nowadays. In those times, there were no Joneses to keep up with.

For a beautiful photo essay on modern Berlin through an ex-pat’s lens, check out Paul Sullivan’s Berlin 20/20: A Photo Tour of a Reunited City.

To find out how Berliners are going to celebrate this November 9, check out Two Ways to Celebrate the Fall of the Berlin Wall.

Do you have any of your own stories to tell? Share with us below!

Tagged
Narrative Germany
What did you think of this story?
Meh
Good
Awesome