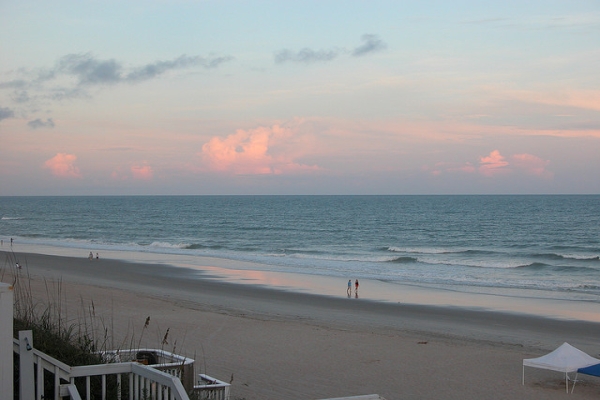 A lot clearing business, a man named Brian, and life in a trailer — C Noah Pelletier describes growing up in a family of Beach People.

There’s a certain stigma associated with people who live in trailers. Even a first grader can feel it. Technically, my family and I lived in a mobile home, but you never could have convinced me. My father’s television idol was Bob Vila. Without him, he probably wouldn’t have ripped out the living room wall to install the bay window. Nor would he have added the master bedroom, or a work studio made from the planks of an old tobacco barn. As our home came together, piece by piece, it would have taken an architect to pin us down for trailer trash.

We lived on a small barrier island off the coast of North Carolina. We were Beach People – Emerald Isle People, to be exact. My mother was an artist, and my father a potter. In 1985 he started a hauling business, clearing debris from local construction sites around the island. The operation consisted of him, a flatbed truck, and one part-time employee, Brian. 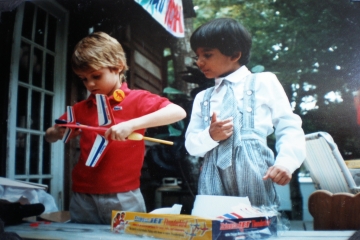 Despite hailing from Minnesota, Brian easily blended in with the locals. He had a deep, leathered tan, and wavy blond hair raked back into a moist mullet. A solid-bodied man, he resembled an out of shape wrestler, someone with a name like “Butterscotch Pony.” Although Brian’s background was in manual labor, his true calling seemed to be hitting the skids.

My father had met Brian at a lawn party at Big Daddy’s bungalow, a two-minute walk from the Bogue Inlet Pier. Big Daddy was a bourbon-drinking retired drill sergeant who opened his home every summer for a three-month drunk. Brian crashed in Big Daddy’s spare room, offering his services in lieu of rent: Performer of Odd Jobs by day; Life of the Party by night.

A solid-bodied man, he resembled an out of shape wrestler, someone with a name like “Butterscotch Pony.”

Like most jobs on the island, this gig was seasonal, and by summer’s end Brian needed a new place to stay. He tackled homelessness with the resolve of a hitchhiker, settling for whatever came along. That winter, he holed up in the stock room of Lacy’s General Store, and my father took him on part-time.

I don’t remember when he first came around, but like a peculiar smell wafting up from under the porch, I just sort of noticed him one morning. He was sprawled on our bench swing, looking very much like a patient in need of a blood transfusion. My mother offered him the next best thing: 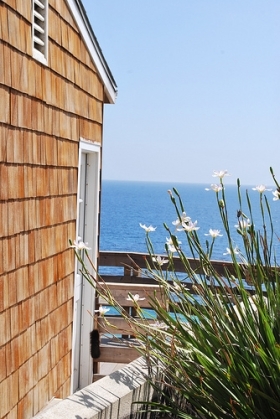 “Can I get you a glass of water?”
“Yeah,” he croaked. “I had a Hawaiian Punch earlier and it just made me thirstier.”

I had never heard an adult admit to drinking Hawaiian Punch before, and how could someone drink something and become thirstier? I sat on the porch and examined Brian, feeling that on some level perhaps we weren’t so different. There was no sense of authority in this man, but rather a childlike oblivion. He was someone I felt I could climb on like a jungle gym. When my mother returned with the water, Brian’s head was tilted back, eyes closed and arms outstretched, as if being recharged by the sun.

My father had started his lot clearing business in response to Emerald Isle’s building boom. Beach cottages were springing up like sandspurs on the island. He’d contact building contractors and agree upon a flat rate for collecting and hauling rubbish from the worksite to a landfill. This made the construction workers happy too, because they had a clean space to build someone else’s dream home.

In the beginning, my father sent Brian to the smaller jobs alone. His punishment for this came in the form of complaint calls from worksite foremen. 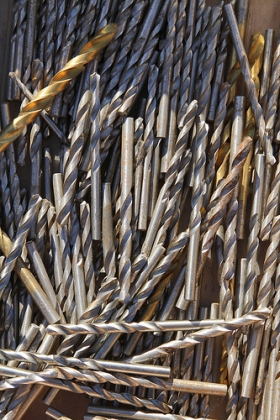 “Stair treads?” My father repeated into the receiver. “Well, I sent my guy over to that lot yesterday – I haven’t got a clue where they are.” I could tell how well the conversation was going by the way he fiddled with the phone cord. “Alright, let me give him a ring and see if we can’t track them down for you.”

Brian had his quirks, but he didn’t fit the profile of master building supplies thief. Still, my father picked him up in the flatbed and they drove to the landfill to investigate. When they got there, he discovered Brian had taken the term “lot clearing” at face value: if it wasn’t bolted down or gripped by a construction worker, Brian had hauled it off and dumped it. Along with scraps of tarpaper, Mountain Dew bottles and other garbage, he’d thrown away the sawhorses, scores of fresh lumber, and unopened boxes of nails. A half day of rummaging turned up thousands of dollars worth of building supplies.

By spring, my father’s part-time business was looking more like a pisser than a second stream of income. But nobody could accuse Brian of not trying. He never gave my father attitude, and he always showed up to work. In fact, he seemed to be around the house more than ever.

Along with scraps of tarpaper, Mountain Dew bottles and other garbage, he’d thrown away the sawhorses, scores of fresh lumber, and unopened boxes of nails.

Early one Saturday morning I poured myself a bowl of cereal and was about to turn on the television when something outside the bay window caught my eye. It wasn’t much after six o’clock, but Brian was in the yard sporting a pair of wayfarer shades and cut-off jeans. He had the hose clinched between his knees, and was lathering like a man well accustomed to illicit outdoor bathing. He had my full attention. He moved swiftly, rinsing one arm and then the other. After hosing off, he wrung out his hair and stepped into my father’s tool shed, closing the door behind him.

This incident piqued my curiosity, and whenever Brian made himself scarce during the daytime, I’d creep into the shed to see what I could find. Perhaps he’d hidden some sort of treasure inside? 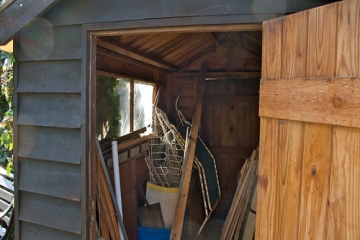 The shed was constructed of cedar planks with a sheet of corrugated metal for a roof. The closest thing to furniture was a worktable, and an old army cot my father had picked up from a yard sale. There wasn’t even a light switch on the wall, just heavy woodworking tools hanging from nails. The only treasures I ever found were empty cans of Tahitian Treat. I wondered if Brian was living in our shed. This was an exciting thought! There was no shower. No phone. No dress shoes. In fact, it had none of the things I didn’t want.

But my parents never mentioned there was a man living in our shed, and I was never sure if he was or not. Twenty-two years later I found out he’d stayed there the whole summer, and that some time around Labor day my mother had taken a stand: “Real families don’t have grown men bathing in their back yard.” Brian was, once more, in search of his next crash pad.

A year or so after he left, we moved into a two-story house across the bridge on the mainland. My father built a freestanding pottery studio, and my mother converted the spare bedroom into her painting room. It was refreshing to visit the beach, but over time, life on the island seemed like a world away. Of course my parents kept names and numbers in their contact book, but – like so many things in the past – I think that had more to do with nostalgia than reference. And as they both entered a period of high artistic productivity, the flatbed collected pine needles at the edge of the yard.

What was it like where you grew up? Leave a few snippets in the comments below, or – better still – email nick[at]matadornetwork.com with a proposal for a story.