I flew Boeing’s 787 Dreamliner last Wednesday on a United flight from Tokyo to Los Angeles. I’ve flown on over a thousand planes, and this segment goes down as one of my five favorite flights of my life.

There is much talk about how dicey the planes are, and that they’re fraught with gremlins. My flight took off and landed on time, with no complications. Compare that to the three Airbus flights I had cancelled on me in 2012. 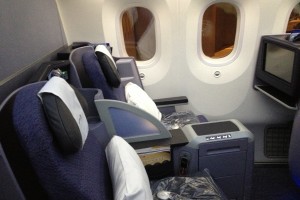 I’d blown the piggy bank and used points for a Business First seat, 2A. The first difference I noticed was the size of the overheads, and how much manageable they are. I could easily have stacked two suitcases in the compartment. The whole cabin smelled new, like when the plastic comes off a mattress or a couch.

This was the cabin crew’s first run on a Dreamliner and it was obvious that they were excited. Business First is always an enjoyable experience, but even up front the cabin crew can be frosty, depending on who you get. This crew was nice but also, I think, proud. They’ve probably flown the same tired old plane on this route for years, which will make anyone feel humdrum after a while. They looked as if they’d all traded in a Hyundai for a BMW. 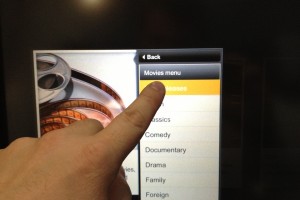 All of the bells and whistles are worth shouting about. The large windows somehow make the seats seem bigger. Dimming them without a shade is indeed neato. The push button televisions worked perfectly. 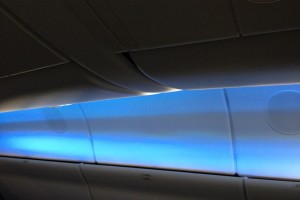 Tokyo love hotel-style ceiling lights are sexy. It’s like a tunnel of colors.

The plane’s interior lights were groovy and sometimes gave the vibe of a Japanese love hotel. The hues were pinkish and purplish, never the stark white light that normally hits your eyes on airplanes. I could never tell which of the ten lighting sequences was coming but I can say that whatever psychology they’re trying to employ, it works. I slept when I was supposed to sleep, I ate when I was supposed to eat, and I peed (in the rather large bathroom) when I was supposed to pee.

The air quality difference is noticeable, and not just because so many people have written about it. The air seems as good as outside, with moisture and no hiss as it pipes in. My water bottle did not do that thing where it twists into itself, which always makes me wonder what my body’s just flown through.

I could rave about the quality of the flat bed and the food, but I won’t. Instead I’ll point out one feature that made me the happiest: quiet. I was able to listen to my normal headphones at a low level, because there was nothing competing for decibels. This plane does not sound like other planes because it has little-to-no sound at all.

I’ve seen the reports of all the hiccups that the new fleet is having. I’m sure I’d be unsettled if I’d have been on a plane that had trouble. Instead, reporting from my own experience, I can only say that I will climb aboard another Dreamliner the first chance I get.

Tagged
Lux Travel
What did you think of this story?
Meh
Good
Awesome