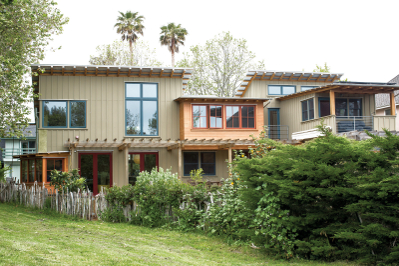 University of California, Santa Cruz, professors Bernie Tershy and Erika Zavaleta and their four kids didn’t physically move far when they built a new home a few blocks from the beach in Santa Cruz. But the result of their collaboration with the Berkeley-based architecture firm Arkin Tilt is leagues away from the constraining home they lived in for the past ten years. Their new abode is a marvel of green design, with a photovoltaic array on the roof, straw bales in the walls for insulation, and an open southern facade that embraces both a bustling backyard and a bucolic park.

As they began looking for architects, the couple imagined that they would have to push hard to get their green agenda into the home — seek a style, and then insert the substance. But a tour through Arkin Tilt’s website revealed not just a sustainable sympathy between designer and client, but a brand of modern architecture in which the couple could see themselves living. “When we were talking to architects about the design of the house and what we wanted, lots of them kept asking about the ‘look’ that we were after,” says Zavaleta. “But we wanted a house that wasn’t a ‘look’; we wanted a house that actually is something. Arkin Tilt is interested in form, function, and structures that fit their sites.”

With about two dozen straw-bale buildings on their résumé, David Arkin and Anni Tilt found a balance between passive design strategies — plenty of natural light, maximized winter sun, shaded harsh summer rays, and cross-ventilated breezes — and the latest in green technologies. But for all its light-on-the-land cred, the home succeeds because it so aptly suits its users. Surfboards festoon the deck, chickens peck in the yard, the kids turn flips on the trampoline, and the pair of academics finally have enough space for all their books. “Plus,” as Tershy puts it, “everywhere you go in this house is really, really pretty.”

This story originally appeared under the title Gotta Bale at Dwell, whom Matador is proud to count as a content syndication partner. 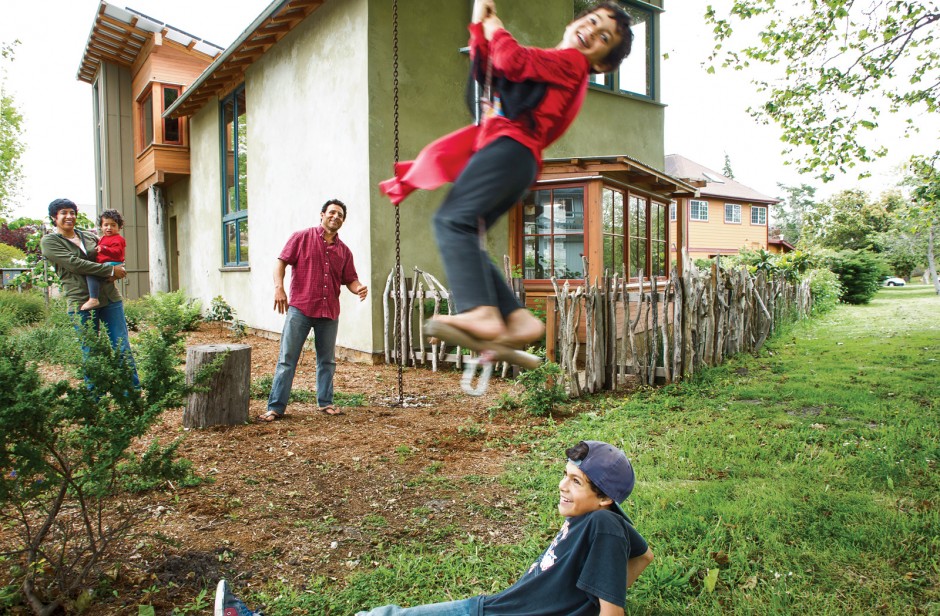 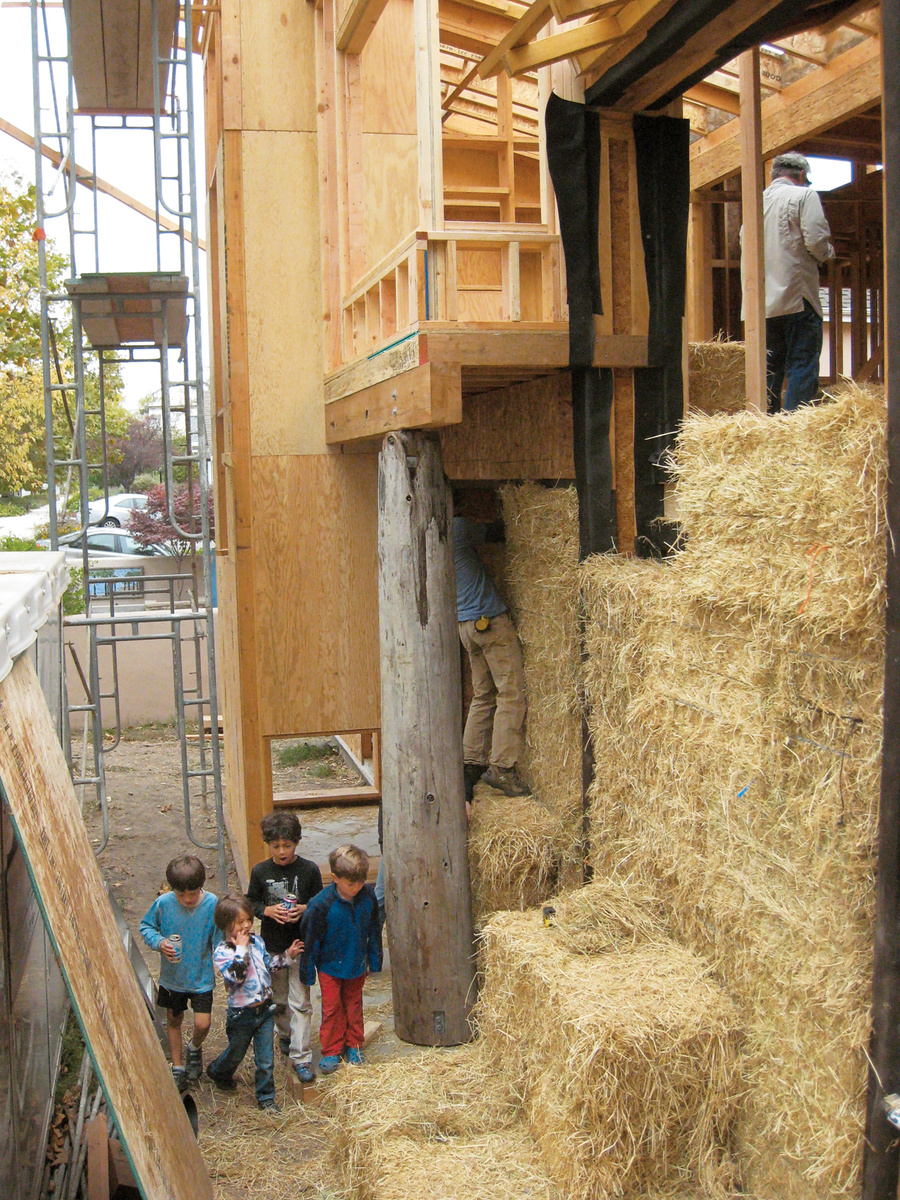 “Straw is basically a waste material”

...says Tilt. “Farmers used to burn rice straw, but now they’re baling it up to sell, which takes tons of CO2 out of the atmosphere.” It’s also a stellar source of insulation, both thermal and acoustic. With the guidance of structural engineer Kevin Donahue, Arkin Tilt, the couple, and a group of their friends and neighbors pitched in for a daylong “bale raising.” To minimize the straw’s volume within the walls (they used 150 bales), the architects tipped the bales on edge, placed them between structural wood I-joists used as posts, and finished them off with welded wire mesh and lime plaster. 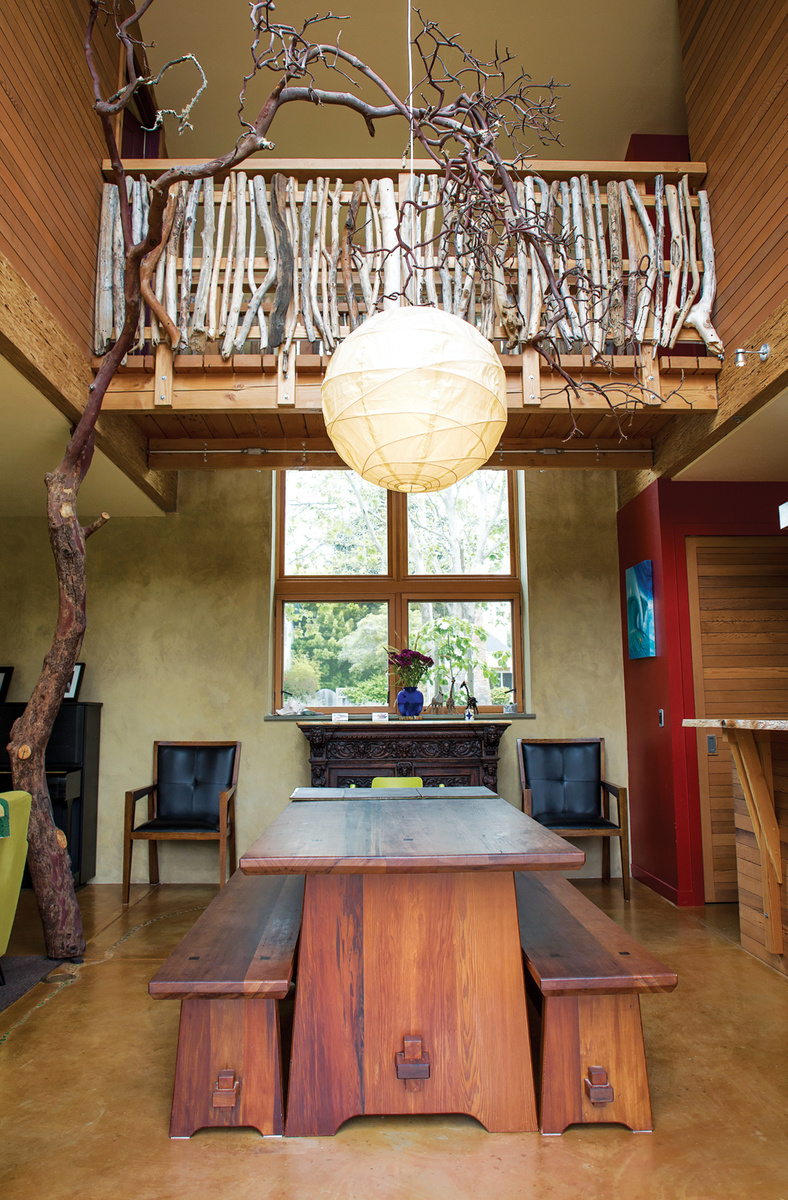 Driftwood that Tershy, Zavaleta, and the kids spent years collecting

...from local beaches makes up the pickets of the backyard fence, a pillar outside the front door, and the railing on the upstairs hallway. But it’s a Pacific madrone that puts a rustic exclamation point on the interior. The tree fell on a friend’s land, and the couple, after hauling the best boughs into town, turned it into the centerpiece of the double-height dining room. 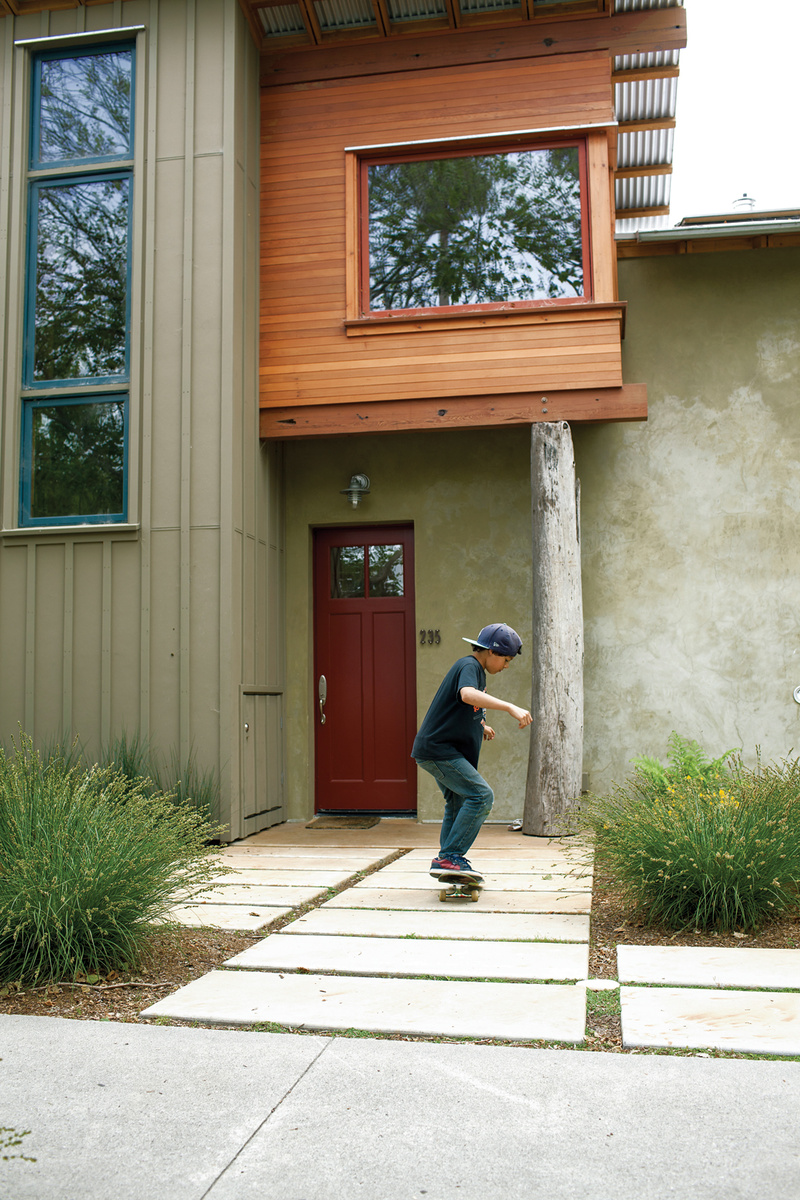 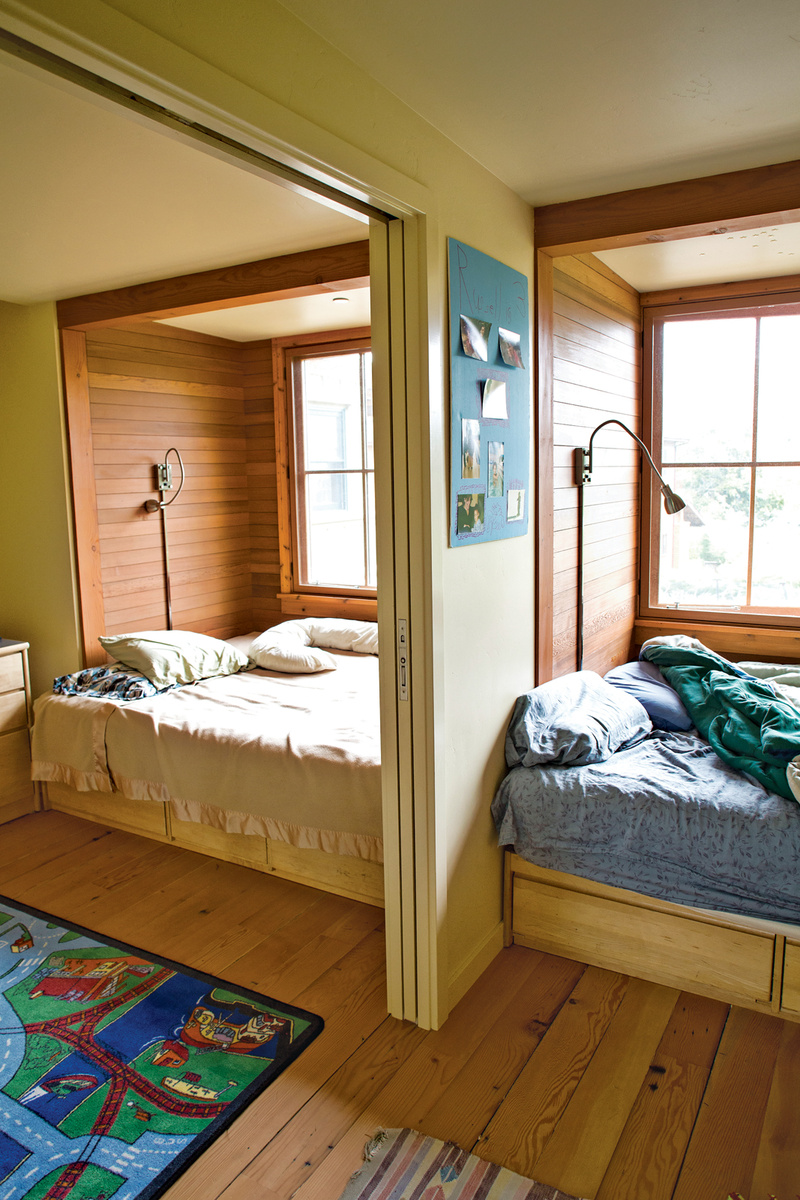 In the kids’ rooms

...the couple has made fine use of UC Santa Cruz dorm furniture -- beds, armoires, and desks have gotten a second life off-campus, and Tershy and Zavaleta report that after enduring years of freshmen, the pieces ably stand up to their kids. Outside the upstairs office, an old couch holds court on a small balcony with great views to the south. 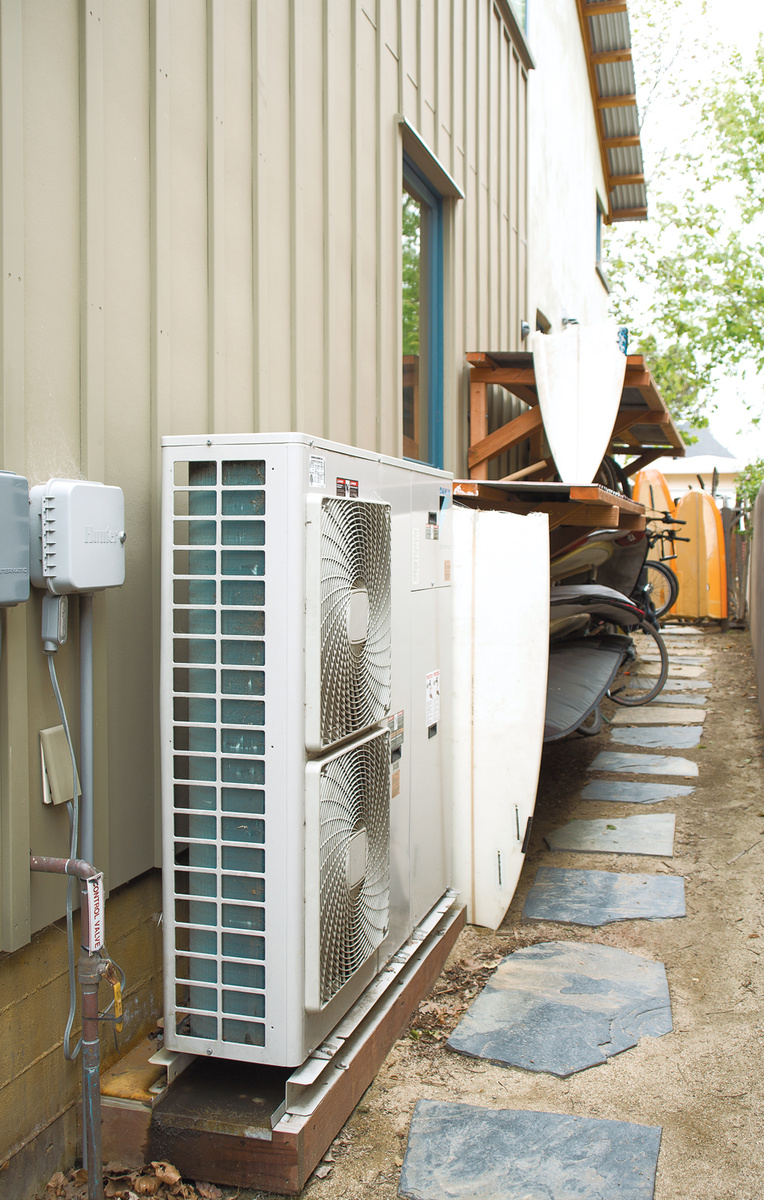 ...laid the groundwork, but to approach the couple’s goal of making a zero-energy house, Arkin Tilt selected an Altherma air-to-water heat pump system by Daikin. “The technology has been around for decades in Europe,” Tilt says, “but this is one of the first installed in California.” The device draws heat from the air outside and uses it to warm water both for domestic use and to power the in-floor radiant heating on the ground floor and in the upstairs bathroom. Best of all, the electricity the system uses is offset by 24 photovoltaic panels by Sanyo on the roof. 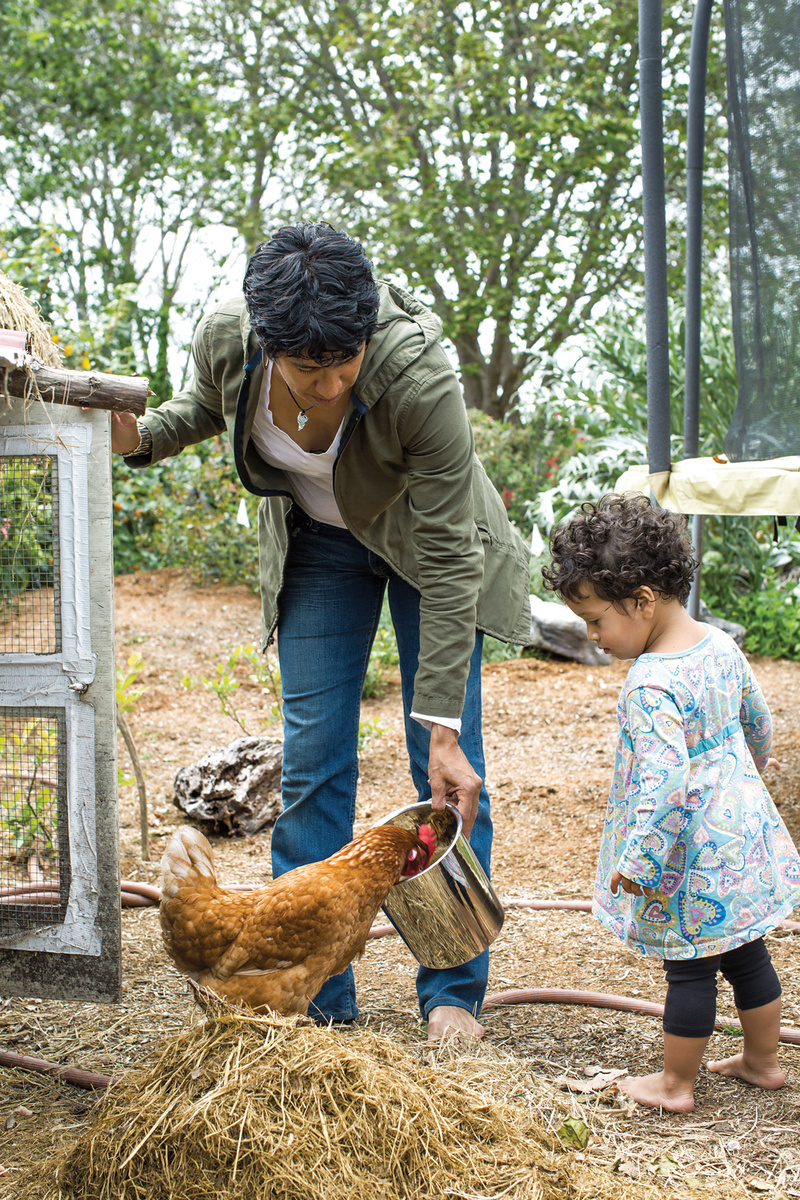 Though the backyard is certainly big enough

...for the hot tub, trampoline, vegetable garden, and chicken coop, the family gained even more outdoor space by orienting the sunny, south-facing back of the house toward Bethany Curve, a well-used park and path to the ocean. The kids often play in the creek that runs through the green space, and Tershy and Zavaleta use it for quick trips down to the Pacific to surf.