THE COLUMBIA RIVER WAS FIFTEEN FEET ABOVE NORMAL levels the morning of Memorial Day, 1948. Alongside the river rested Vanport, an Oregon town built to house new dockworkers during the World War 2 industry boom. With 18,000 low-income residents it was the largest public housing city in the country, with more federal housing units than New York or Chicago (although during the war its numbers were twice the size). Even though the city was built entirely in a flood plain, the U.S. Army Corps of Engineers assured residents through leaflets that there was no cause for alarm.

They were wrong. At 4:17 PM, one of the railroad embankments protecting the town broke and Vanport was washed away that very day. There was barely a trace left of what was the first semi-integrated African American community in the state of Oregon – with 6,000 black residents before the flood. Thousands were left homeless and at least fifteen were dead. 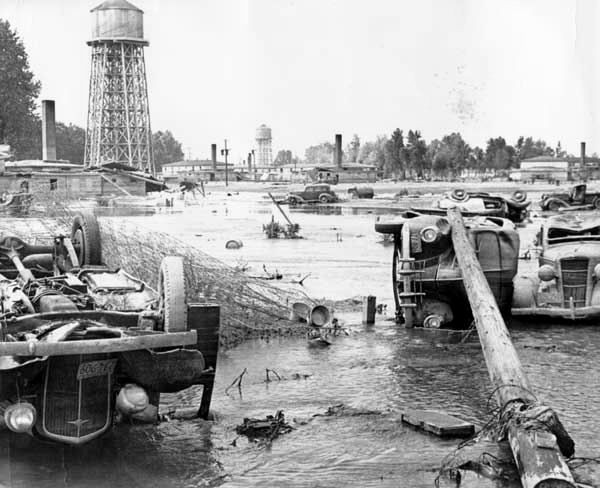 Destruction in the wake of the Vanport Flood, 1948 (via)

Out of the frying pan…

Of course, the possibility of this devastation had been of little concern to the older white community of Portland next door — so long as they didn’t have to integrate or build public housing within city limits. “Portland can only absorb a minimum number of negroes without upsetting the city life,” remarked then-Mayor Earl Riley in an article from The Oregonian. Oregon’s real estate Code of Ethics also ensured that black Americans were allowed to live only in less desirable redlined areas at the time, a practice that was not ended until 1950.

Before the flood, the nearby neighborhood of Albina was home to a large working class white and immigrant population who had organized against building public housing for black Americans in their community, leading to the construction of Vanport. After the flood, thanks to increasing black-white segregation practiced by real estate brokers in mid-20th century Portland, and buildings that were much older than in other neighborhoods, Albina quickly became the largest black community in the city. This was followed by widespread white flight from Albina.

Overcrowded by the flurry of Vanport refugees and neglected by the city, Albina then spent decades fighting poverty, segregation and its identity as a “blighted” neighborhood — situations made worse by urban renewal projects like the new The Memorial Coliseum (in 1959), and the I-5 highway (early 60’s), that each cut up and dispersed large swaths of the area. The Emanuel Hospital expansions also forced many residents out of their homes in the early 70’s. By the late 80’s, Portland was in the throes of a crime wave, and Albina was one of the hardest-hit neighborhoods.

Today, thanks to cheaper rents and Albina’s proximity to downtown, new young and mostly white residents (who, unlike their grandparents, seek both an urban environment and diversity) are quickly, and ironically, overtaking the area.

Gentrification is a large part of the aesthetic reversal of mid-20th century urban planning.

America’s racial segregation is usually mentioned in context with the economic and civil rights disparities faced by people of color, but there are plenty of instances when being a person of color also put you in a region that was ripe for destruction (such as Vanport). This is largely thanks to mid-20th century America’s period of urban renewal, which replaced Jim Crow laws as the less-immediately-noticeable method of forcing the undesirable and politically powerless into, and then out of, places like Albina.

Urban renewal as a tool to segregate and destroy neighborhoods of color was perfected under Robert Moses, the “master builder” of New York City from the thirties through the sixties. Thanks to his superstar status in the U.S. as a city planner, his unelected reign over New York City influenced many American cities to undergo some of the most bizarre, ugly and, in the case of San Francisco and Detroit (among many others), destructive retrofitting in urban history.

Moses was most famous for his preference of cars over public transportation. This meant building highways and parkways in urban centers to better service the rapidly expanding, wealthier, and whiter suburbs (most notably, the controversial Cross Bronx Expressway). 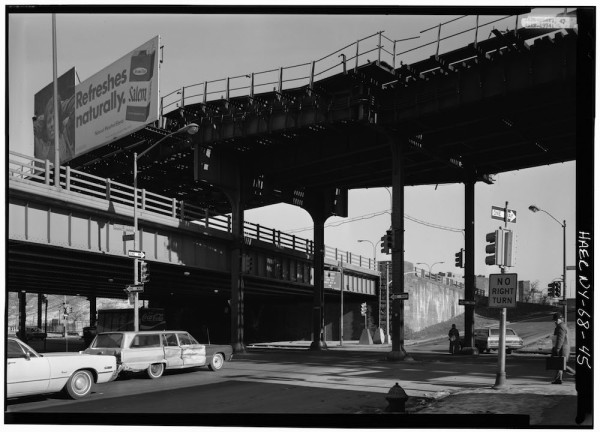 “[Moses] influenced many American cities to undergo some of the most bizarre, ugly […] and destructive retrofitting in history.” The Cross Bronx Expressway, ca. 1973. (via)

He also built public parks in ways that deliberately did not allow for public transport, public housing that barred people of color from living in it and leveled sections of communities that have still not fully recovered from his policies (including The Bronx). The American conception of the “inner-city” being a scary, depressed and drug-addled wasteland was, in part, the outcome of this man’s policies.

What we are seeing now in gentrifying cities like San Francisco, Chicago and Portland is a wholesale rejection of Moses’ low density, high-traffic and amenity-free suburbanized sprawl. This is actually a wonderful thing for residents of places like LA, which have started reconsidering the need for effective public transit. Even New York City, Moses’ former playground, has reclaimed a number of spaces for pedestrians in recent years, including the once notorious and now-shopping-mall Times Square.

In terms of creating stronger infrastructure and healthier communities in urban centers, gentrification is actually a good thing. But during this process of re-urbanization, the underlying issues of systemic racism and classism mean that gentrification favors the same people that ran to the safer suburbs fifty years ago — the majority of whom are white.

But the ramifications of gentrification are even more profound.

What some of us may not realize is that this push on lower income citizens to leave the city thanks to obscene rent hikes is not just a moral problem: it is matter of life and death. We have seen this after Katrina and Sandy, and the little snowstorm that shut down Atlanta– low-density areas cannot handle natural disasters as effectively as places where resources are close at hand, and usually areas with more people of color suffer the most because of it, be it Vanport or New Orleans’ Lower 9th Ward. 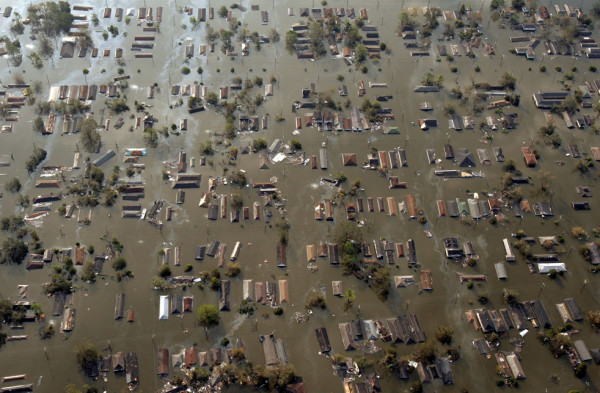 Lower 9th Ward after Katrina (via)

Gentrification is not just a problem because of cultural whitewashing in Oregon’s Albina, disruption of public services in San Francisco and limited housing for low income citizens in Brooklyn, it is a problem because the same people that struggled through the worst of the “blighted inner city” days of the 70’s, 80’s and 90’s, are now being forced to move quietly to the fringes of the city while the tide comes in.

Tagged
Culture Guides Oregon, United States
What did you think of this story?
Meh
Good
Awesome

There’s now just one Blockbuster left in the whole country

The most amazing things to do in Bend, Oregon, during all four seasons

Rockhounding for gems and treasure on the stunning Oregon Coast

You can now rent Bella Swan’s house from ‘Twilight’ on Airbnb, and yes, there are cardboard cutouts