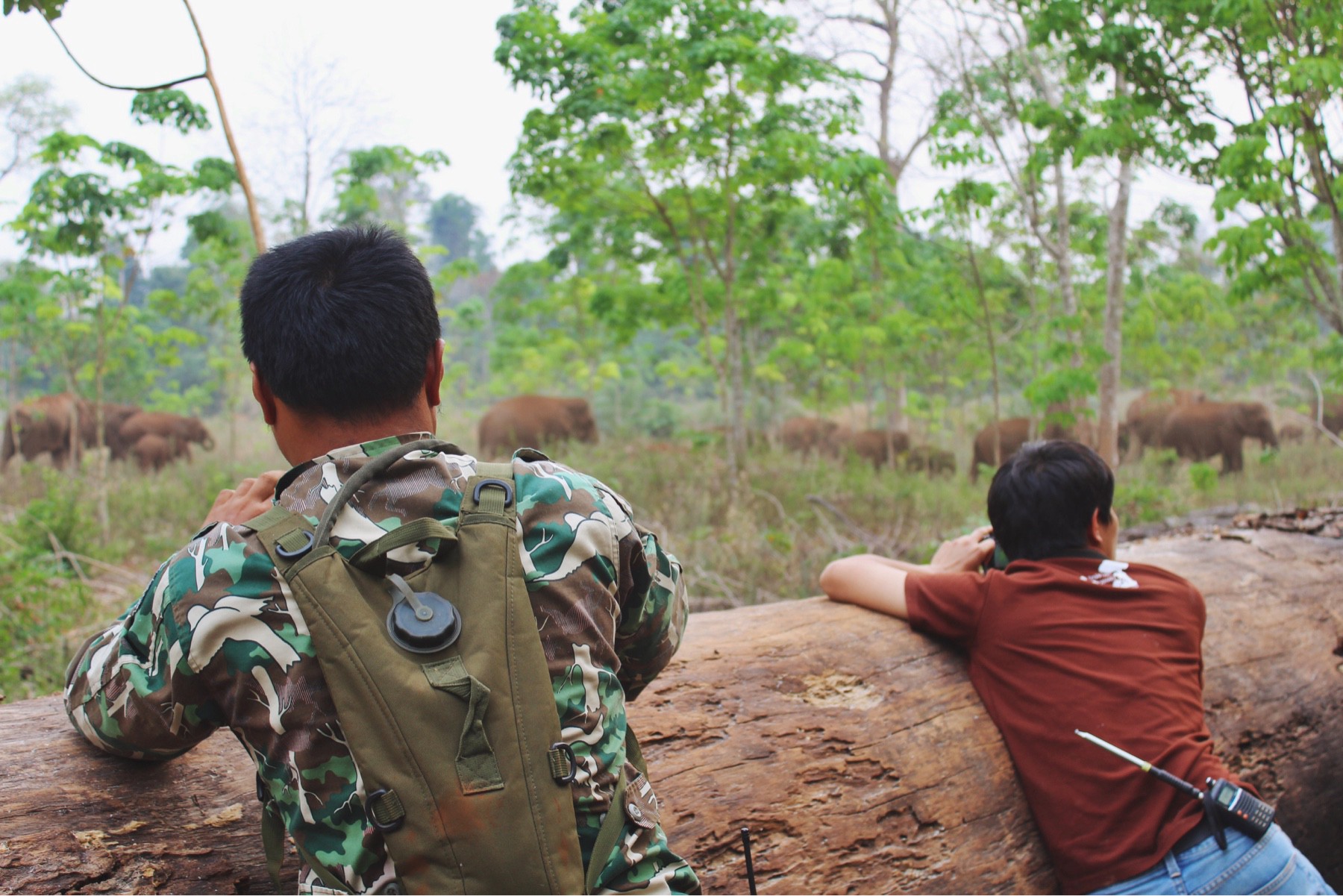 In typical millennial fashion, each student at my 2002 end-of-year award ceremony was to receive an individualized certificate of honor. Second grade had left me a dissatisfied 8-year old with a science class composed of lessons about earthquakes, weather patterns and animal habitats. Where were the mad scientist chemical reactions, the explosions, the space travel?! Ms. Frizzle’s fantastical field trips with the Magic Schoolbus and the Incredible Edibles kit delivered by Santa had skewed and screwed my expectations. On one occasion I broke my frustrated silence and questioned unassuming Ms. Whittenberg: “when are we going to learn REAL science?!”

She failed to suppress a laugh. I suppose my question was “poignant” and “meaningful” because she quoted me in front of the entire school. They laughed too. And naturally, I received the Science Award.

Not much has changed in 13 years. Rather than “real science,” 21-year-old Joe finds himself looking for “authentic experiences.” Authenticity! Holden Caufield, eat your heart out.

What constitutes an authentic experience? Is it wandering the twisted streets of Paris in search of the Louvre and a perfect photo? 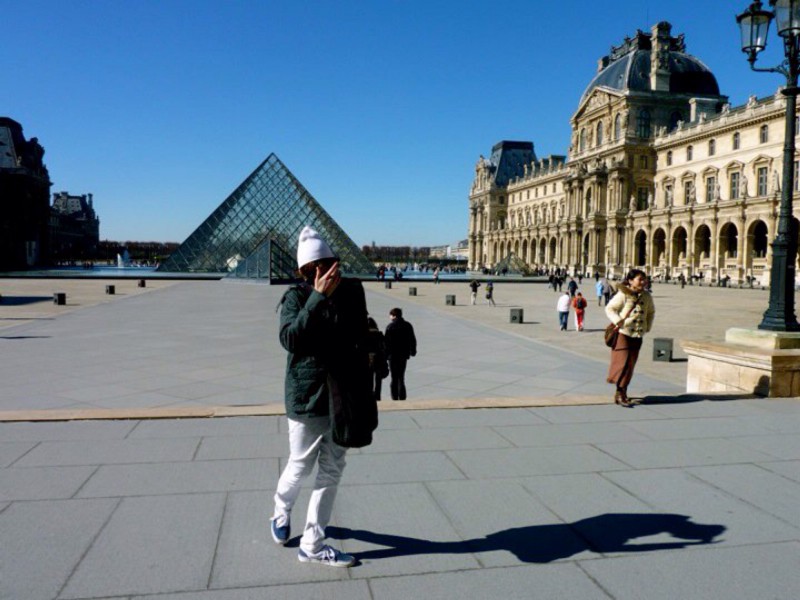 Is it hang gliding in Switzerland to an iPod speaker blasting Metallica, an Australian guide and a ridiculous pair of glasses he made you wear “for protection?” 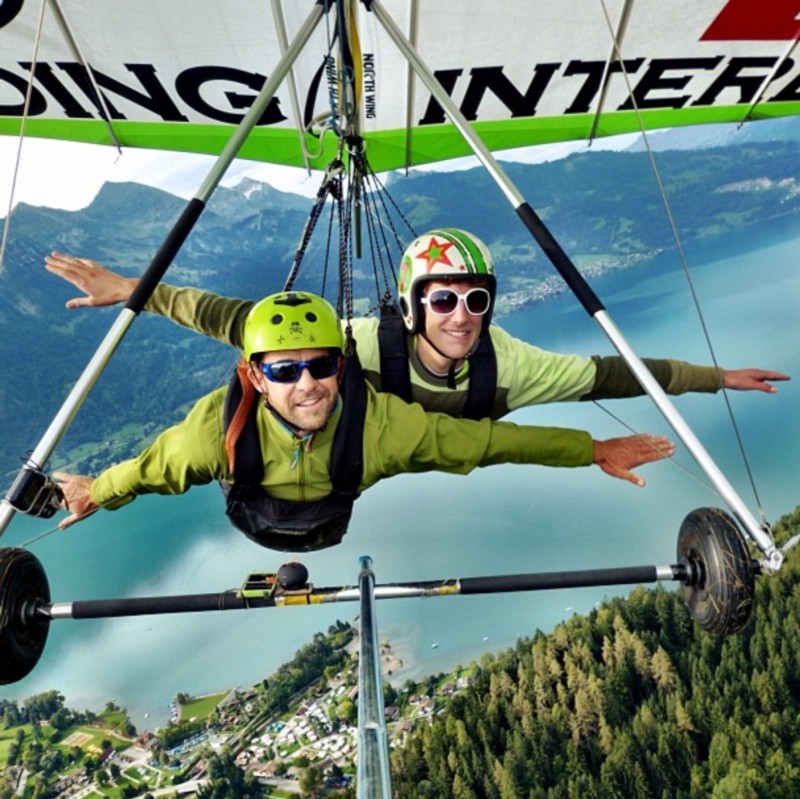 Is it sampling fried squid and downing 40’s of Thailand’s infamous Chang beer with a group of Canadians from your hostel, after a day of feeding and swimming with tamed elephants and a few passing conversations with your Thai tour guides (nothing but love for you, Nana!) who recognized you from the overcrowded Reggae bar the night before? 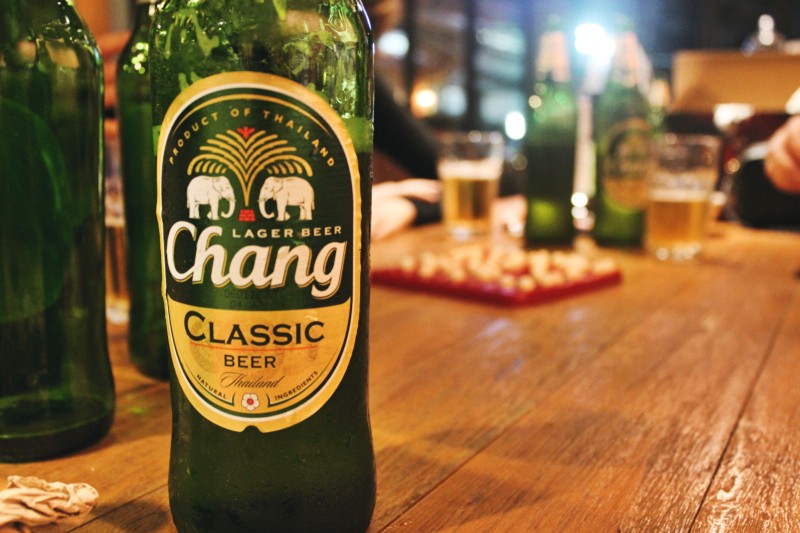 21 year old Joe did that a few weeks ago.

It all sounds pretty romantic. But once abroad for a while, these “unique” experiences begin to feel commonplace. I shocked myself with indifference after wishing family and friends goodbye and boarding the plane to Bangkok in January. My first time in a new continent, a world away from home where English-speaking “farang” (literally: white people) are a minority, after 22 hours of travel at 1am when the metro to my 1 night hostel booking had already closed. Excited? No question! But the drastic culture shock the internet warned about was surprisingly absent upon arrival. 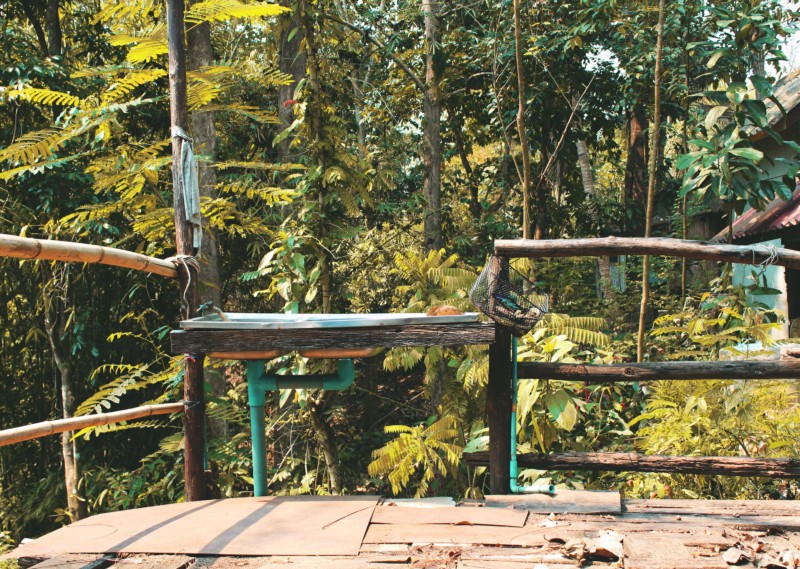 Living on the road, idyllic daydreams from home manifest as reality. You find yourself aboard canal rides in Venice, savoring mountaintop fondue in the Swiss Alps, gasping at sweeping sunset views atop the London Eye and grubbing on steamy street Pad Thai in late-night Bangkok with fellow backpackers. Before you know it, the romantic, exciting expectations are not enough. They get… Boring. Checking off guidebook suggestions can only hold you over for so long.

Am I pretentious? Arrogant? Hypocritical? Too difficult to please? By all means, throw your stones. You’re probably right.

But I’m in good company! Most of my backpacking cohorts will tell you they want to find the same: something different.

Read that again: THE SAME: SOMETHING DIFFERENT.

No, not same same, but different.

In detestation of routine touristic activities, backpackers attempt to set themselves apart from the holidaying majority. But let’s face it, I’m not any more unique than any other yuppie backpacker leaving everything behind to “find myself!” 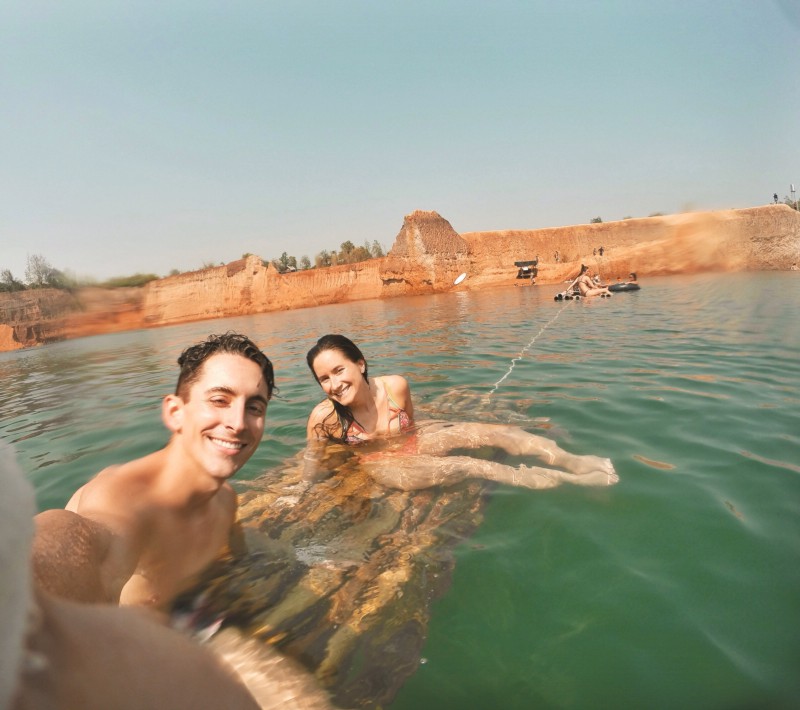 I don’t want to find myself. I want to find something real, to learn something about the world and humankind that we did not know before. Tour package adventures do not satiate this desire. Leave it to the free market for a solution: welcome to the 21st century, a world where withlocals.com exists, and we can pay “locals” to show us around the markets, malls and temples. An improvement? Sure. Or maybe the tour guides are getting smart and switching their business models, like cab drivers resigning to catch the Uber train. I want to know what life like for the average person in Thailand. Certainly not the drunken revelry of Khao San Road or the obscene wealth of the Siam malls (however if you know of a bigshot who casually strolls into Siam Paragon to buy a Porsche and a Rolex while grubbing on a Big Mac from the food court, I beg you to introduce me.) I am less interested in a guided tour by a local, than by knowing what happens after said tour guide is off the clock. Where does she go to eat? What does she do for fun? Where does she sleep at night?

Maybe my standards of authenticity are a little too high. But I am adamant. And sometimes, I am lucky.

Through a friend of a father of a friend (many thanks to you Dave, Craig and Kevin!) and the convenience of Facebook, I was fortunate enough to encounter Surin Binnan, a Thai natural conservationist. 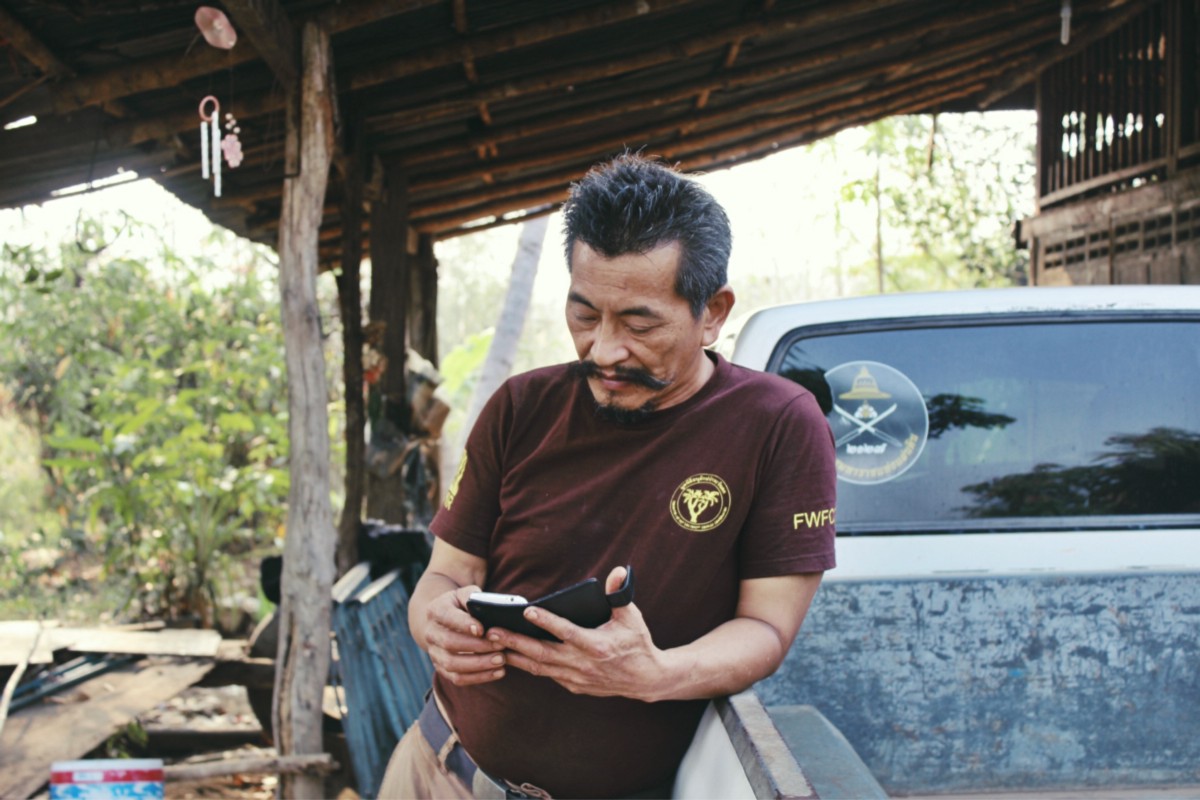 He is every bit as badass as he looks.

We exchanged just a few messages before my departure. Surin generously welcomed me to join him at the Foundation of Western Forest Complex Conservation (FWFCC) in the small village of Thong Pha Phum. None of my backpacking friends had ever heard of Thong Pha Phum. When I inquired about purchasing a bus ticket from Chiang Mai, the infinitely-knowledgeable Thai hostel owner had to Google the village. With Dave’s warning that this would be an experience “not for the faint of heart,” I had no idea what I was getting myself into.

Without question, my response to Surin was a hell yes. 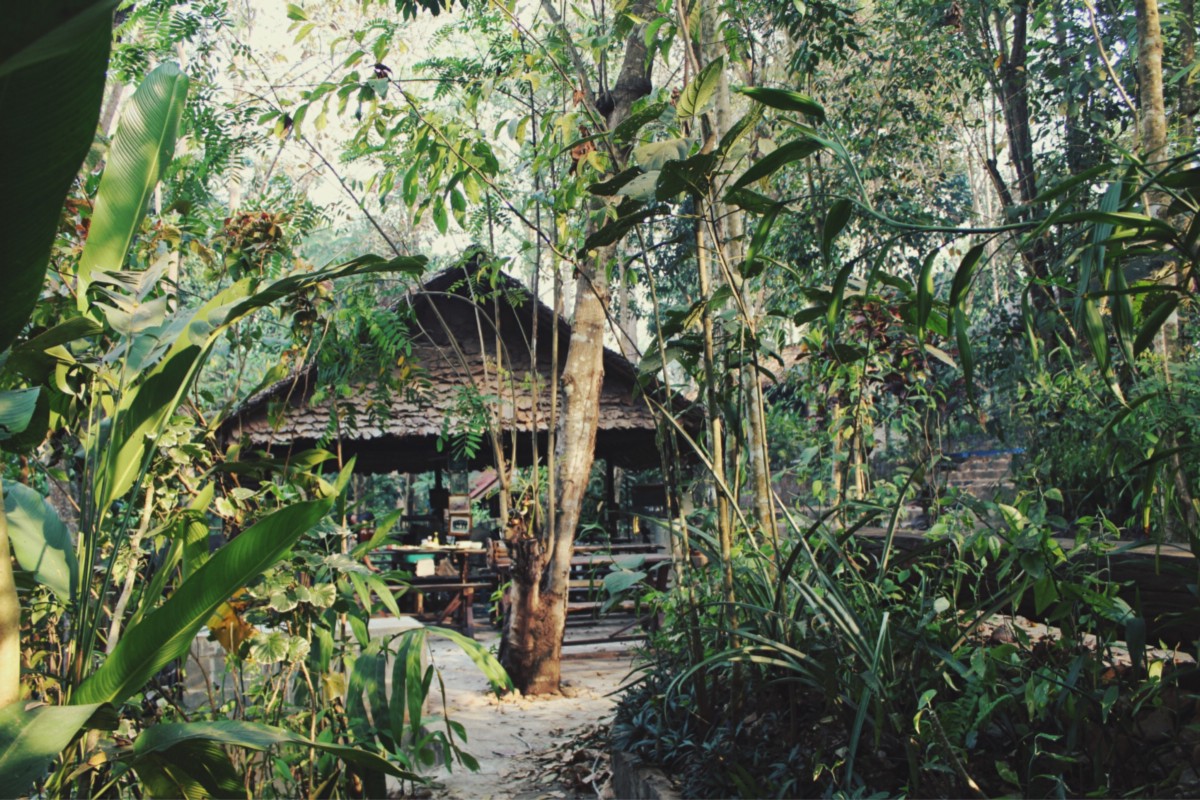 I write now from the FWFCC Headquarters on a swelteringly humid afternoon. Surin built the humble open-air office into the hillside himself, overlooking a small river, the mountain range separating Thailand from Myanmar, and endless greenery. I am the only English speaking “falang” I have encountered in a week (I can’t even say I’m the only falang I’ve seen, as mirrors are few and far between.) Most Thai people in the village do not speak a word of English beyond an enthusiastic “hello!” accompanied by a beaming smile. Without English-translated signage, I am entirely illiterate. The nearest 7/11 is nearly an hour away, but the jungle is a mere 15 minute motorcycle ride. 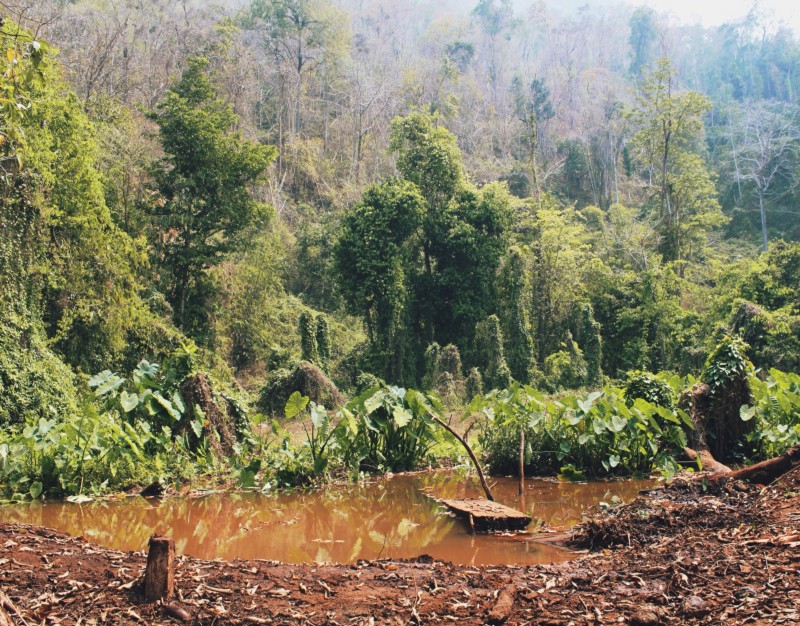 This has become my home. 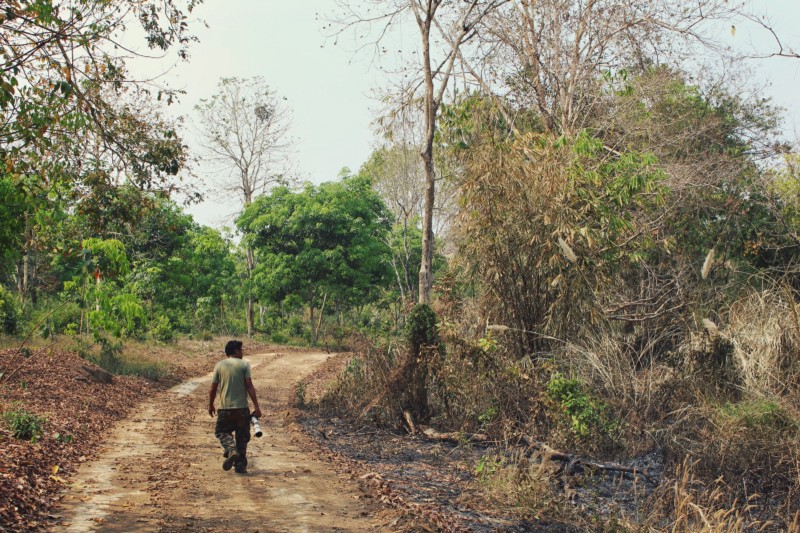 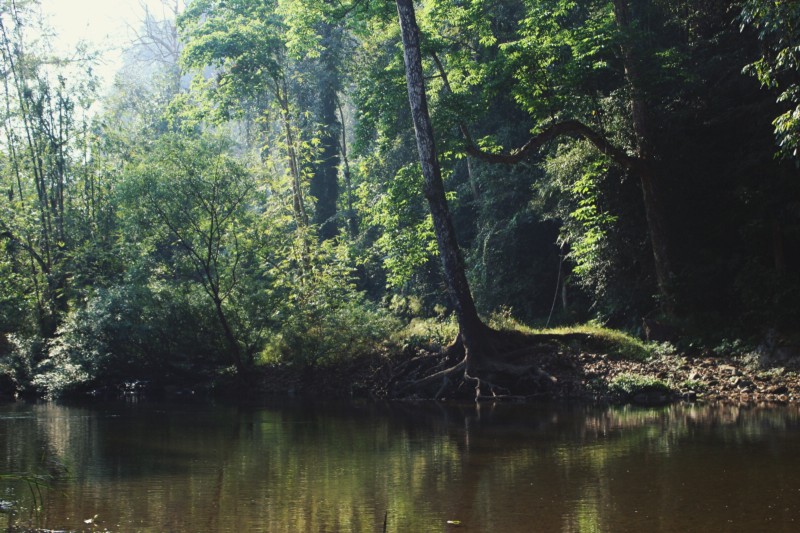 Here I volunteer time With Surin and my fearless partner Deer, who has become astute in communicating with me across a vast language divide. Out of the foundation’s hundreds of ongoing projects dedicated to promoting and preserving the sprawling and nearly untouched Western Forest Complex, we spend most of our time on the Huey Khayeng Wild Elephant Census Project. Some backstory: an influx of nearly 200 wild elephants migrated to Thong Pha Phum in December 2015, and the plantation owners and farmers aren’t too keen on their crops mysteriously disappearing in the night. 200 elephants are an expensive lot of freeloading mouths to feed. Initiated just at the beginning of February 2016, the project seeks to manage the Human Elephant Conflicts (a Thai issue significant enough to warrant its own acronym, HEC) occurring between elephants and farmers in Thong Pha Phum. 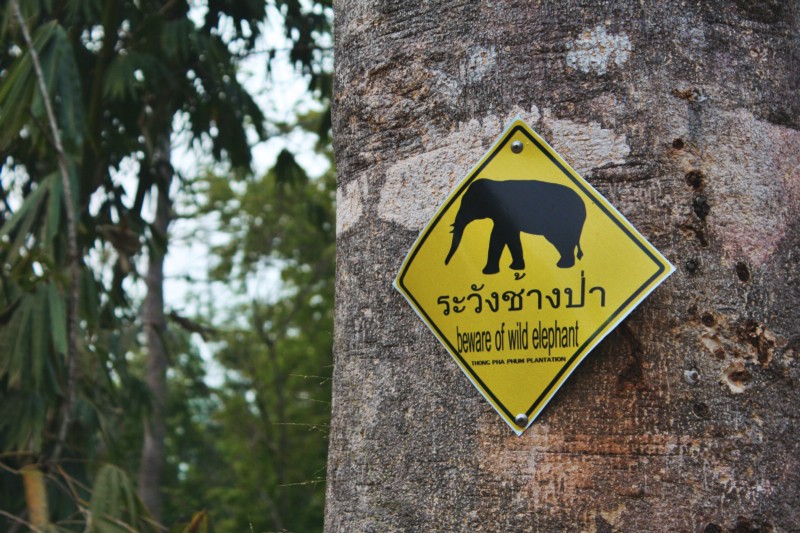 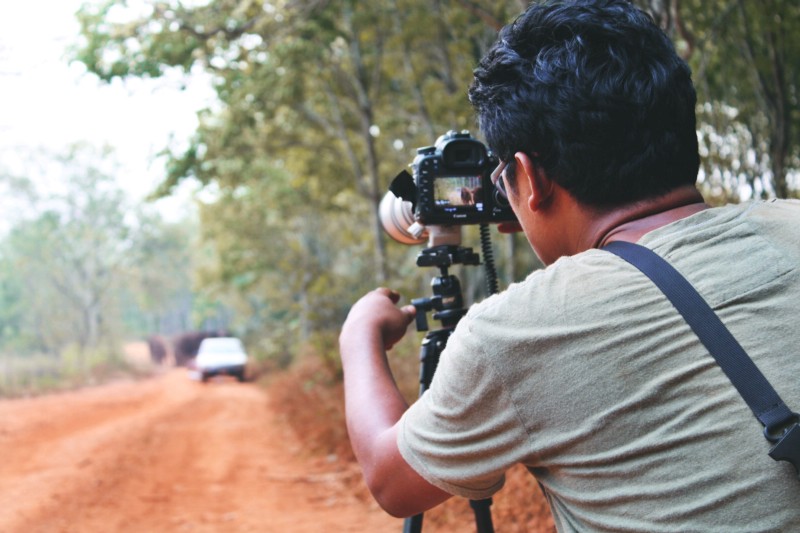 While he works methodically, Surin is rocket fuel to every project he involves himself in. Rather fearlessly, Surin states the Elephant Census Project will take years to complete. The first step? We create a catalogue of each individual wild elephant in the region, and develop a system to visually differentiate the elephants from one another. This task has never before been accomplished in Thailand. “It’s nearly impossible,” Surin tells me gleefully. He is unphased, and justifiably so. We’re talking about the man who single handedly built the first radio communication system in Thung Yai, Thailand’s World Heritage forest. Today, his infrastructure is invaluable to daily operations in the jungle. He has constructed many ranger stations in the jungle, the entire foundation headquarters most impressively. 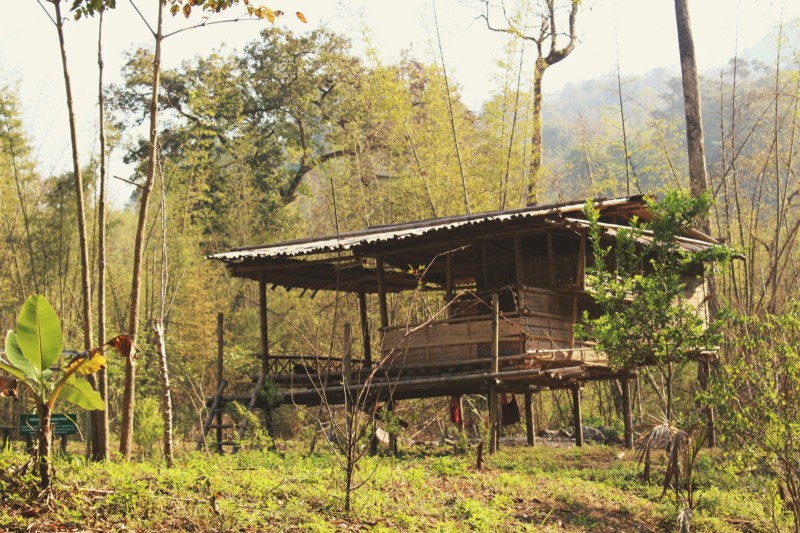 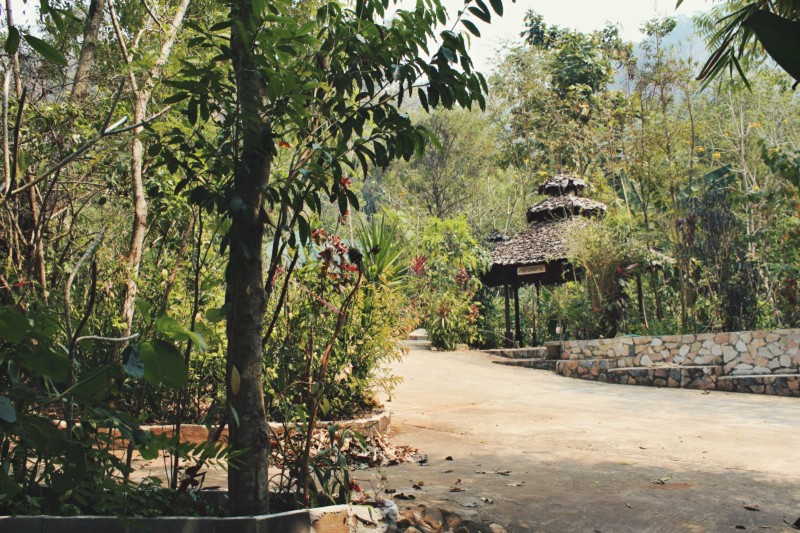 I am amazed such a man would welcome an experientially selfish traveler like me to live with him at his beautiful home in the forest, eat his food and join him in the jungles to find and photograph wild elephants for the census project. 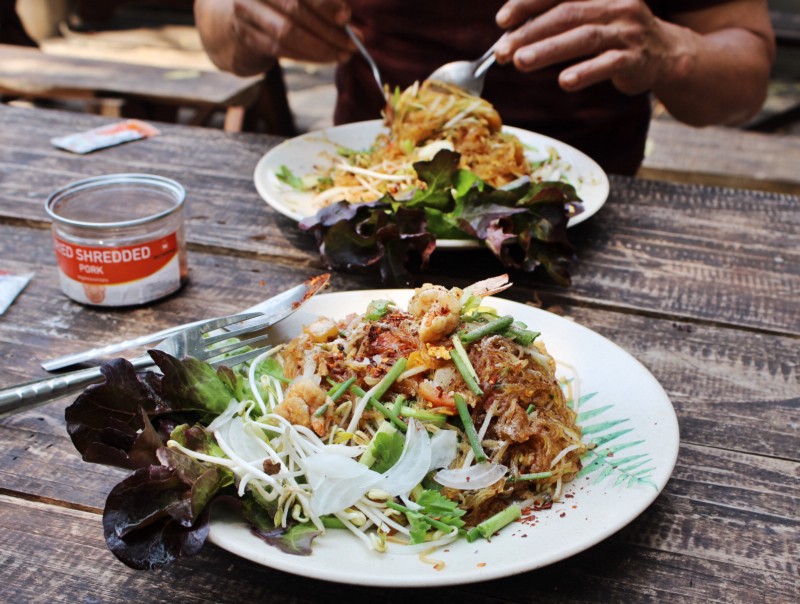 Nearly every night after a delicious dinner lovingly prepared by my sister Pie Jeab (the finest chef I have encountered in Thailand), Surin shares a bottle of local white whiskey amongst a table of forest rangers. Regardless of the language barrier, contagious laughter follows jokes that go untranslated. Surin’s tidbits off wisdom from over 20 years of natural conservation encourage mindfulness, patience and flexibility. 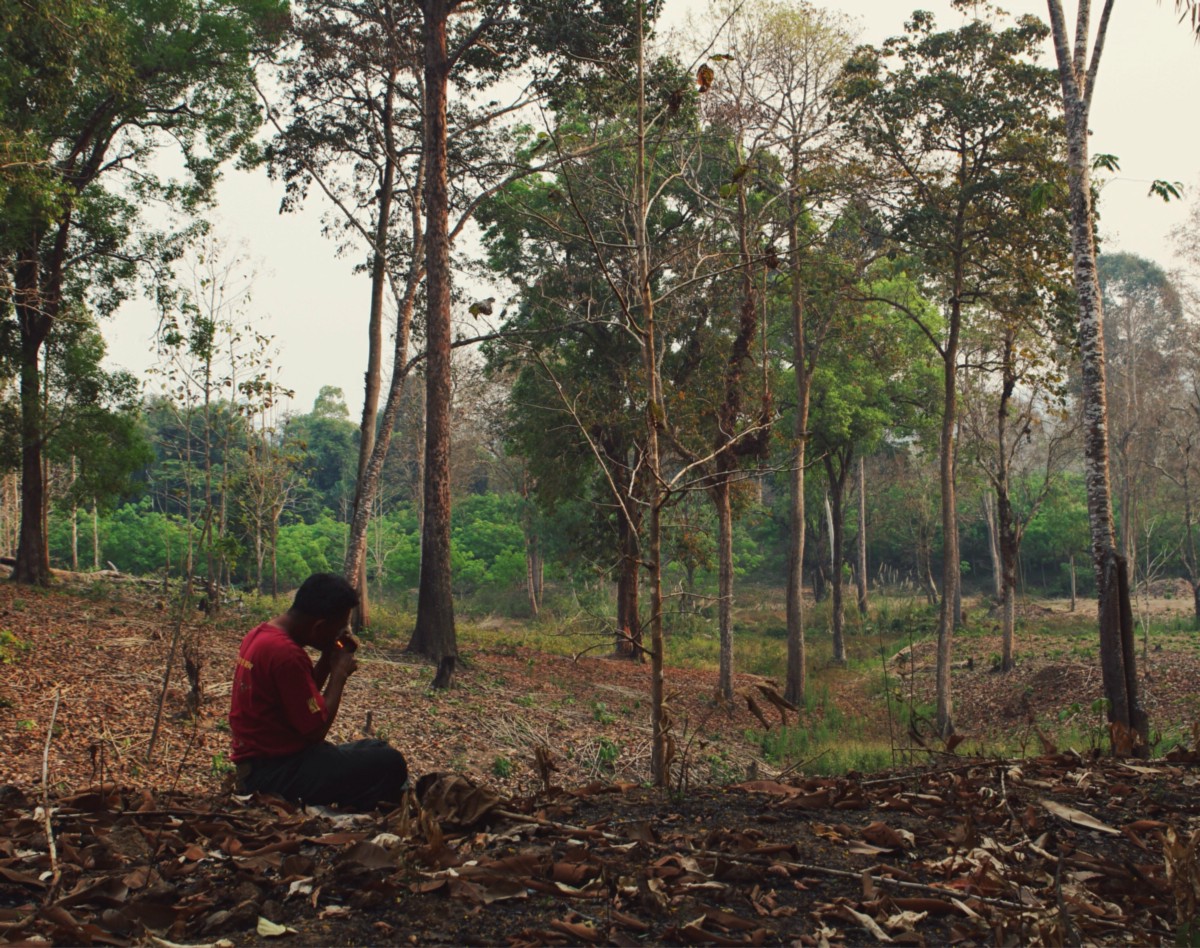 As Surin tells me, it is better to keep a healthy detachment to the “things” in your life, experiences included. Sometimes you will “have”, sometimes you will “have not”. Catastrophic slumps will accompany mountaintop highs, and you may find yourself anywhere in between. That which is undesirable will eventually subside, but similarly the good will not always remain. Embrace change, as change is the only constant. “This is the way!” he smiles. I have much to learn. 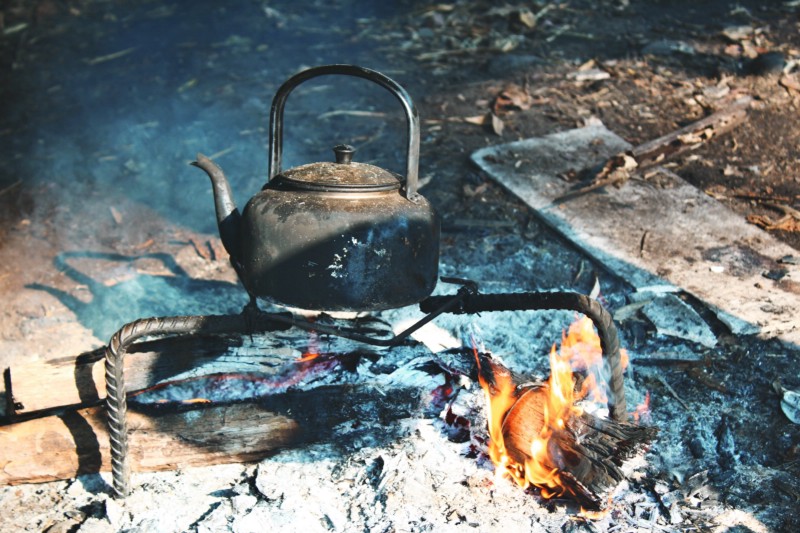 One thing I have learned: How to boil water!

Eventually, after years of seeking, I found “real science” (thanks Honors Chemistry, but no thanks.) But like magic, in a new desire to give back to a country that has in such a short time provided me so much, my authentic experience has come to fruition. 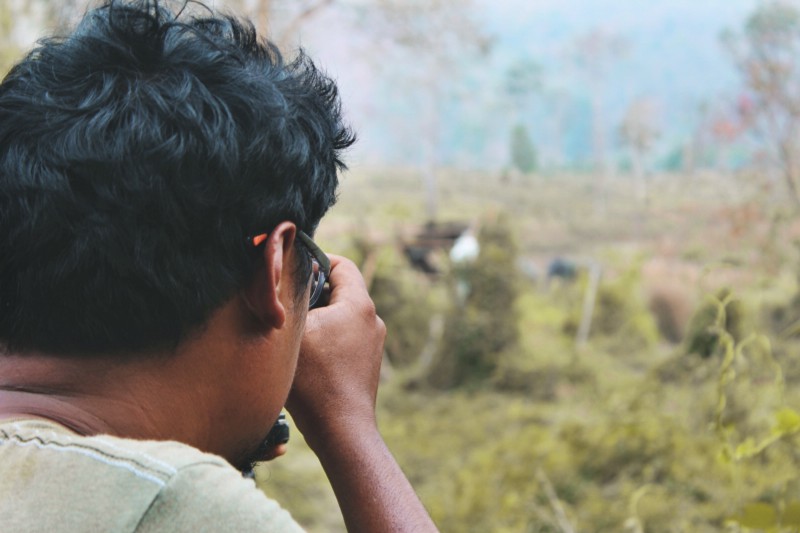 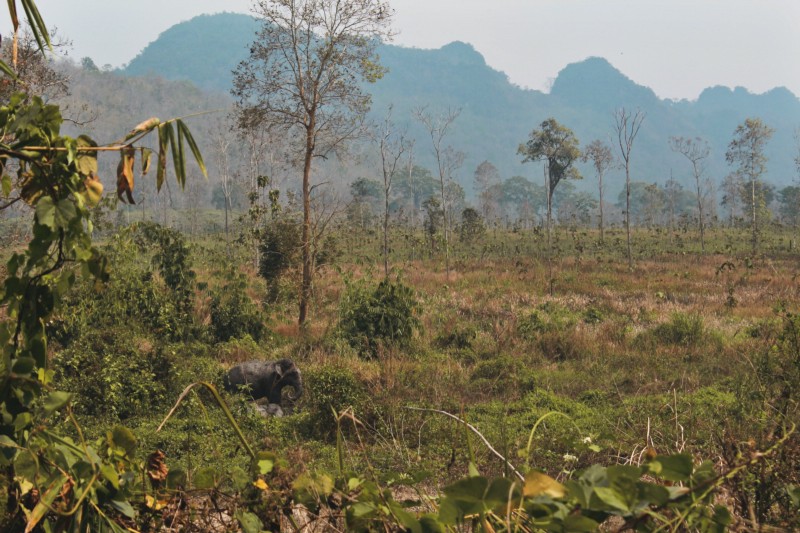 And so I find myself doing what I can to track these majestic wild elephants, to ensure their preservation throughout the region. I’ll be staying for a while. 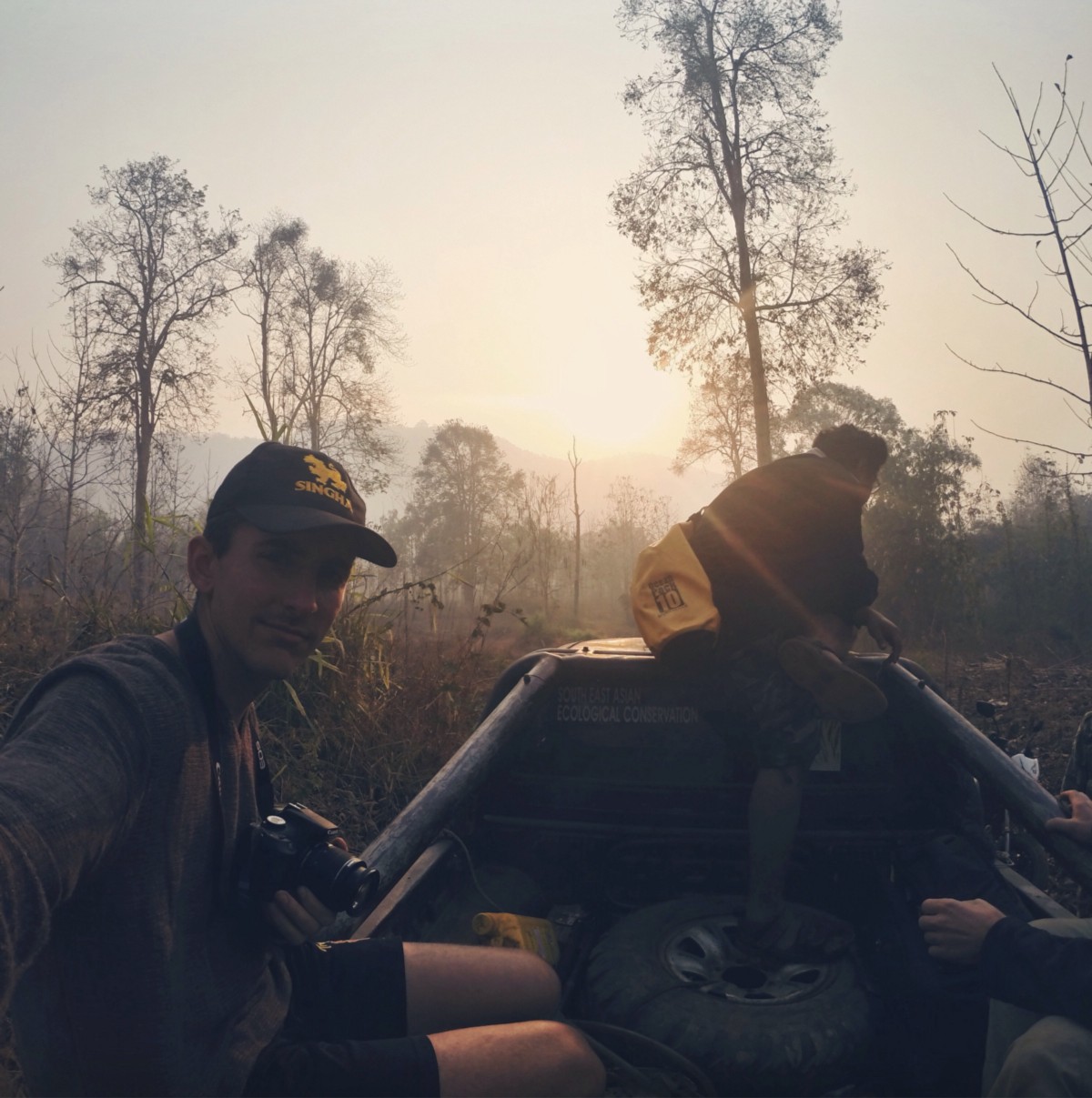 This article originally appeared on Future Travel and is republished here with permission.