“Weaving is part of how we communicate our history to younger generations and the rest of the world,” Rosemary tells me, as she fingers alpaca thread in her home. Her fervour is palpable, as she explains how practicing her skill transmits indigenous knowledge from time immemorial.

For years, hand-woven fabrics have embodied the living history and cultural heritage of the Peruvian Highlands. Textile patterns with expressive names such as Mayu Qenqo (Meandering River) or Pumac Makin (Puma Footprints) tell tales of events that helped shape its identity, an untidy landscape and sacred history spanning thousands of years. 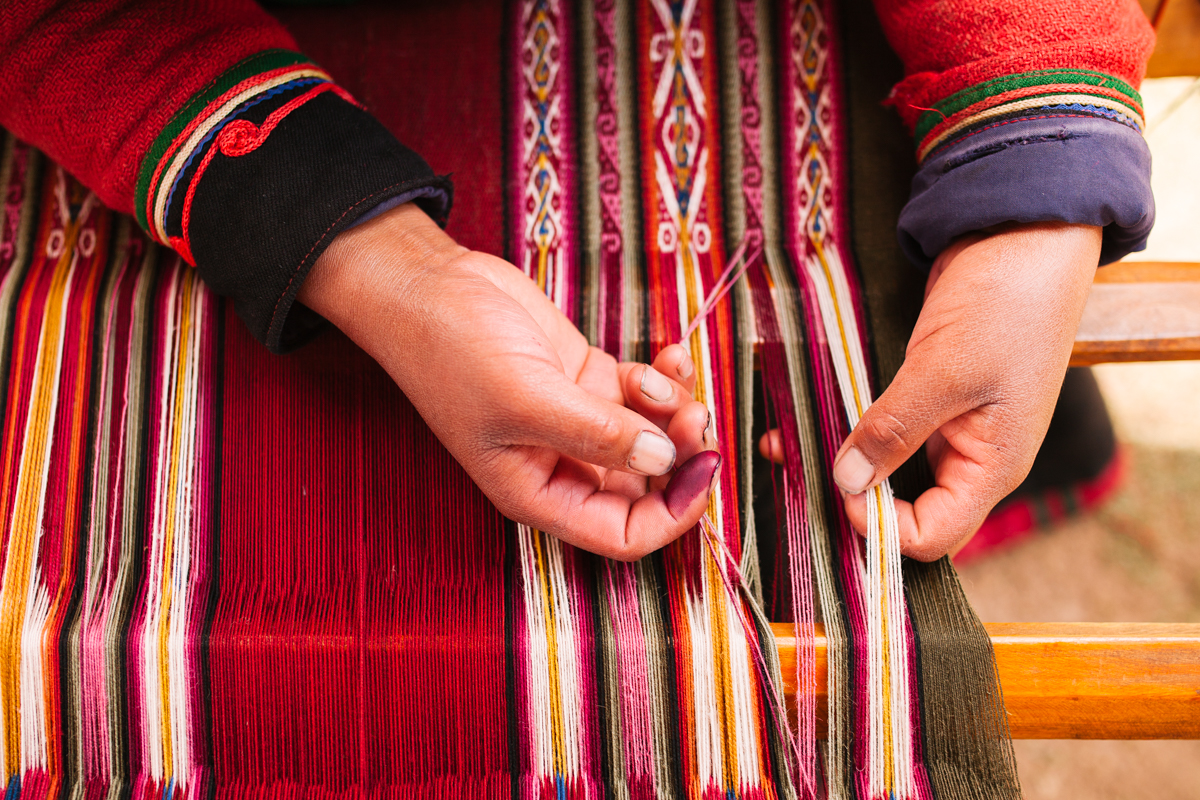 Detail of Asunta, a young Andean weaver from a traditional Quechua community in the Piuray Lagoon weaving a new textile. Weaving is done using a simple backstrap loom, and the pattern design is woven only from memory. The stain on her finger comes from the blood of cochineal, an insect found in cacti that is not only used as a natural yarn dye, but also as lip colour. © Marta Tucci/Naya Traveler

As I made my way through the thundering mountains that so gracefully embrace the Sacred Urubamba Valley, I listened with fascination to the ancient stories about Quechua customs that my driver Elvis was reciting. Humbled and proud, Elvis told me the history of his land and the people who have inhabited it since pre-Columbine times. The ambition and scale of his tales matched any Western classic, despite never being written down.

“Manco Capac was the first and greatest Inca, son of Inti (the Sun) who brought him up from the depths of the Titicaca Lake and ruled from Cusco, the navel of the earth.” We take an unexpected left turn off of the main road, and start to approach Piuray Lagoon, as Elvis continues, “Manco Capac had two children; a girl and a boy. One day Inti asked Manco Capac to go find his children so they could spend the sunset together, and when he went looking for them, he found in their place two lagoons, the Huaypo Lagoon (male) and Piuray Lagoon (female).”

“These two lagoons,” explains Elvis, as if announcing our arrival, “represent the duality of the sexes in modern day Quechua culture.” 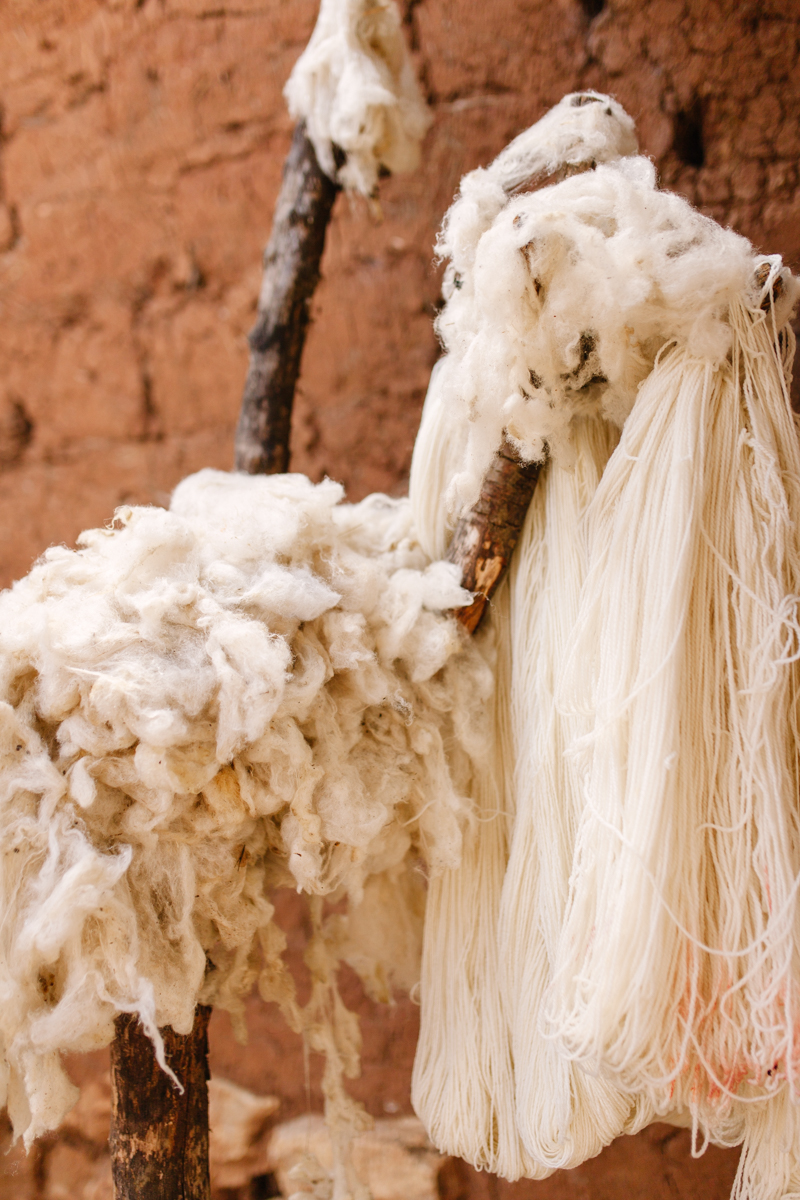 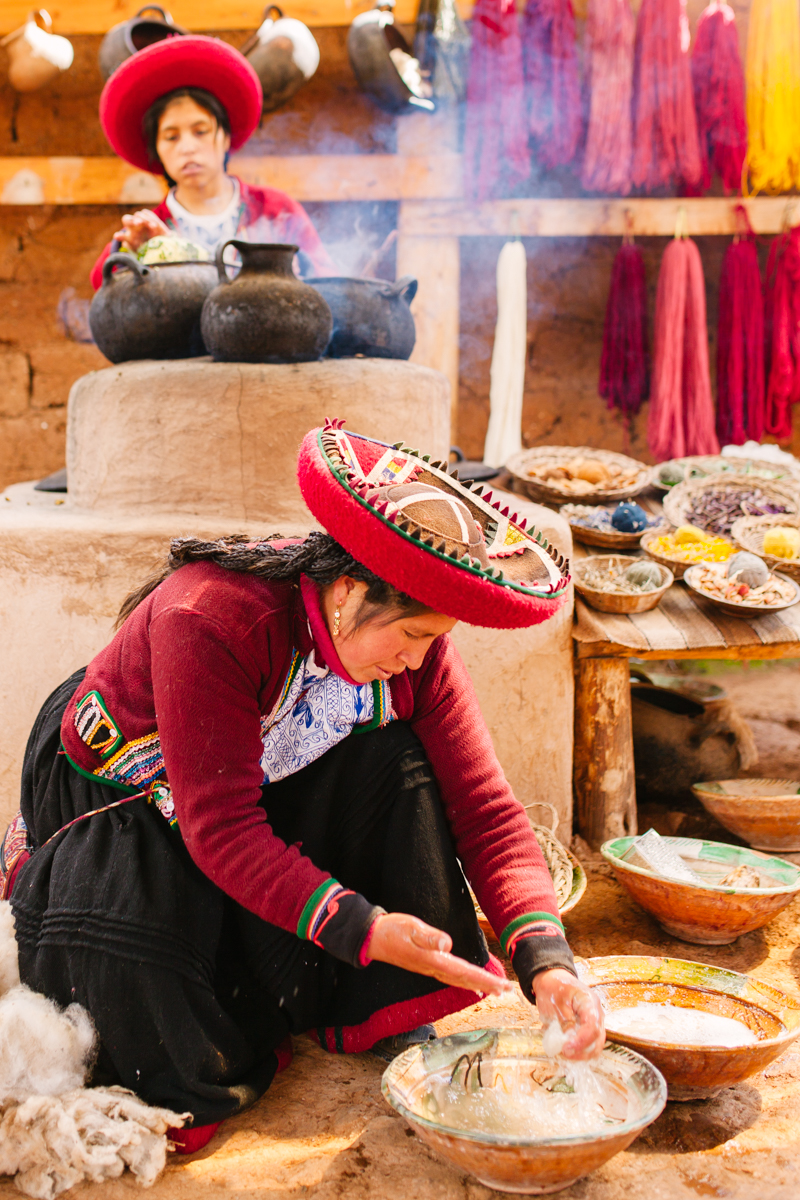 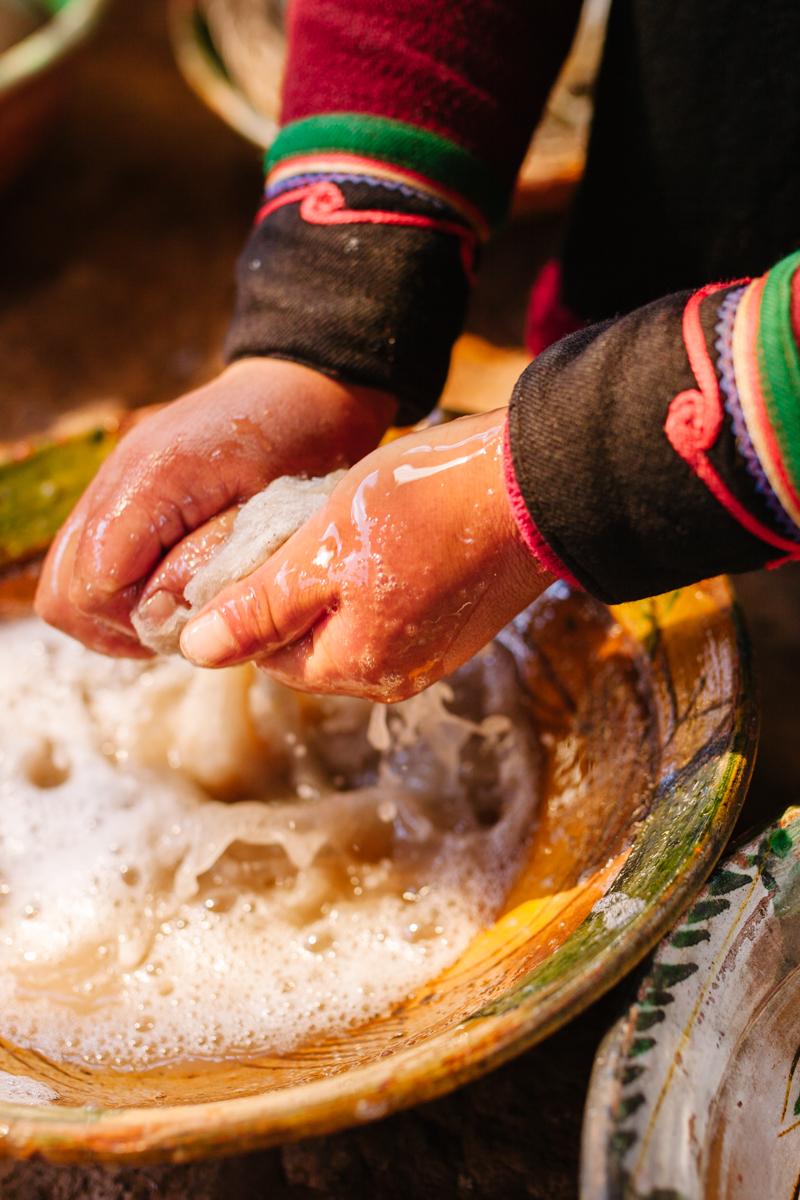 The Spanish colonisation of the Inca Empire in 1528 destroyed and eradicated all written records of Incan culture, which was the only palpable account of Quechua customs and folklore. Now, the only original testament is found between the threads of intricate textile designs woven by indigenous communities of the Puna (Andean highlands). 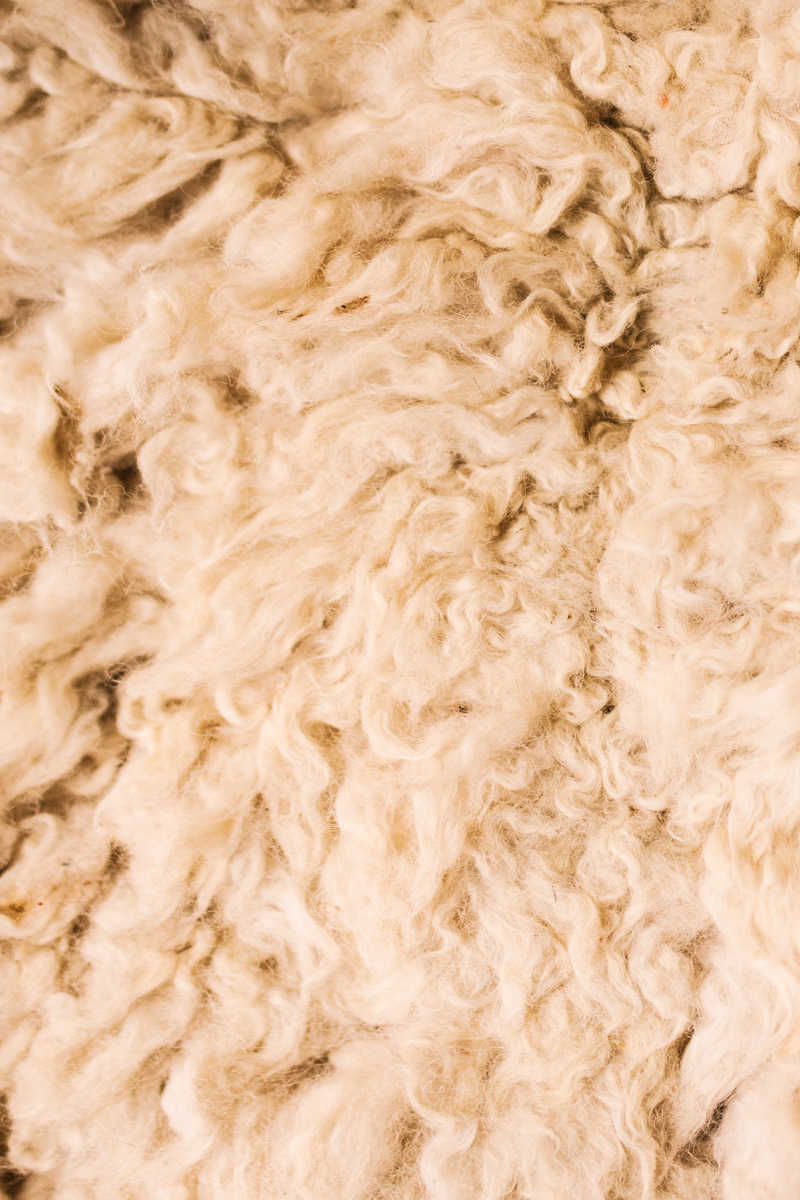 Close-up of llama wool before it is washed, spun and dyed. Traditional Andean weavers raise llamas and alpacas, a domestic species of camelid found in the highlands of South America, to obtain fibre and wool they use to create textiles an clothing. Alpaca and llama fibre is lanolin-free, which makes it soft and insulating, no matter the climate. The process of treating wool has remained unchanged for generations. © Marta Tucci/Naya Traveler 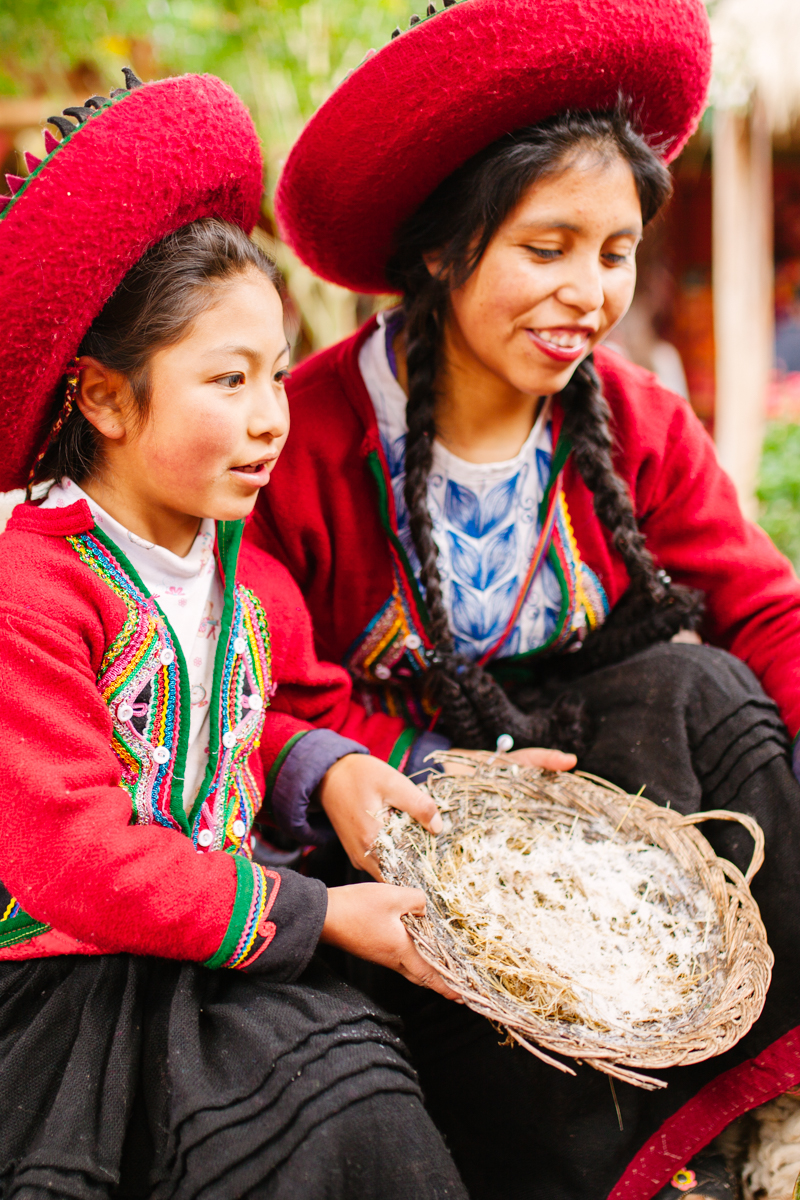 Concepcion (24) and her daughter Feliciana (7), from a traditional Quechua community in Piuray Lagoon, use a sieve made from dried branches to filter the yuca used to make soap. Women from the Chinchero region are regarded as the keepers of tradition and the cultural identity of their community. They pass on their weaving knowledge from generation to generation, and Felicia, at the tender age of 7, is already learning the elaborate process of textile weaving through her mother and the women in her family. © Marta Tucci/Naya Traveler

Up to this day, Quechuan communities from the highlands have been the keepers of tradition and the sustainers of an ancient yet arduous way of life. They work in absolute harmony with the Peruvian mother earth, which they call Pachamama. Their weaving practices date back to pre-Columbian civilisations, and continue to be a great symbol of Quechuan cultural identity.

Reaching a small village near Piuray, we meet Mariana, a young girl of innocent features wearing a traditional montera (hat) and iliclla (shoulder cloth) paired with a colourful vest and skirt. Walking beside her llama, Mariana explains how the women of Chinchero proudly wear their hand woven textiles and clothing on a daily basis, to differentiate the identity of their community from others in the highlands.

The region of Chinchero (3780 m.s.n.m.) in the province of Urubamba is home to several Quechua communities. The men farm the land and harvest potatoes, barley, and quinoa to feed their families and sell at nearby markets; the women raise llamas and alpacas to obtain textile fibres to weave. Alpaca and llama threads are lanolin-free, making them soft and insulating, regardless of the climate. Women like Mariana spin on simple drop spindles and weave on traditional back-strap looms while tending to their flock of alpacas or letting food cook over a fire, just as their forebears had done before them for centuries.

“I started playing with wool and spindles when I was very young. Then, around the time I was 6 years old, my older sisters started teaching me simple weaving techniques and patterns through observation and repetition,” says Mariana. 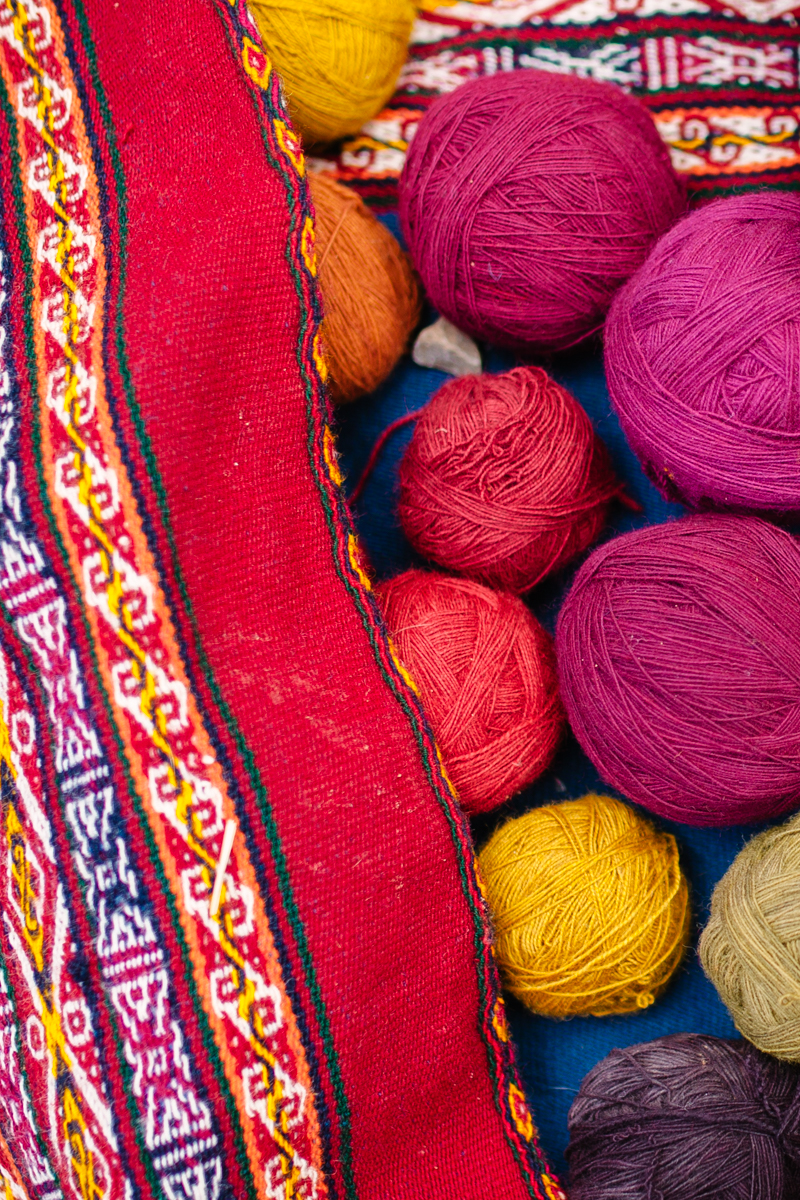 Detail of dyed balls of thread inside a traditional woven textile. The patterns found on this fabric represent the Mayu Qenqo (Meandering River), The Pumac Makin (Puma Footprints), and the Piuray and Huaypo lagoons. © Marta Tucci/Naya Traveler A selection of natural produce such as purple corn, coca leaves, flowers, cochineal, salts and beans, all found in the Urubamba Valley and the Andean highlands are used by local Quechua communities to create the natural dyes for colouring fibre and wool. © Marta Tucci/Naya Traveler 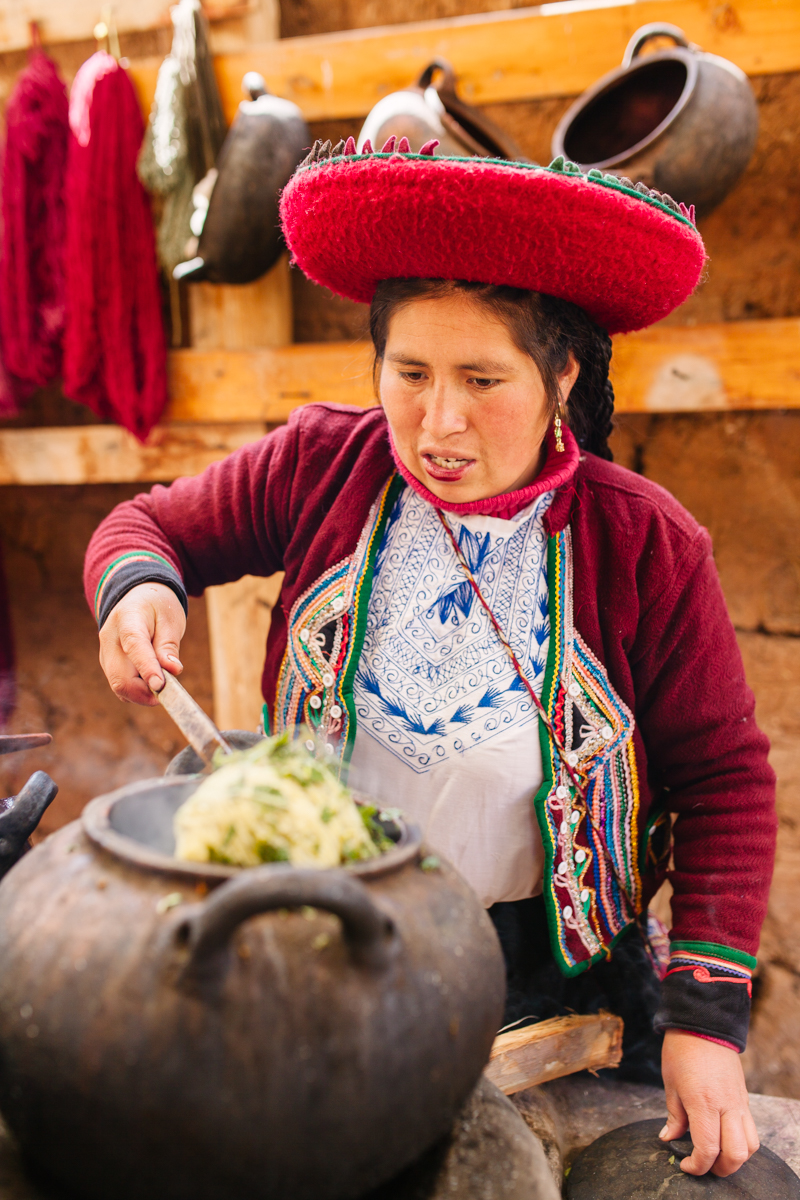 Rosemary (22), a young Andean weaver from a traditional Quechua community in the Piuray Lagoon, checks the dye process of a natural ball of yarn inside the colouring pot. The process of treating wool has remained unchanged for generations in the Quechua communities of the highlands. © Marta Tucci/Naya Traveler

Chinchero has traditionally relied on farming for financial sustainability, yet in the recent years, demographic and social changes have forced small communities to find new ways to sustain themselves. Competition with large agricultural corporations means that local farmers can no longer rely on farming to financially support their families. Indigenous women who used to weave just to serve their family have had to increase their production and sell textiles in local markets. 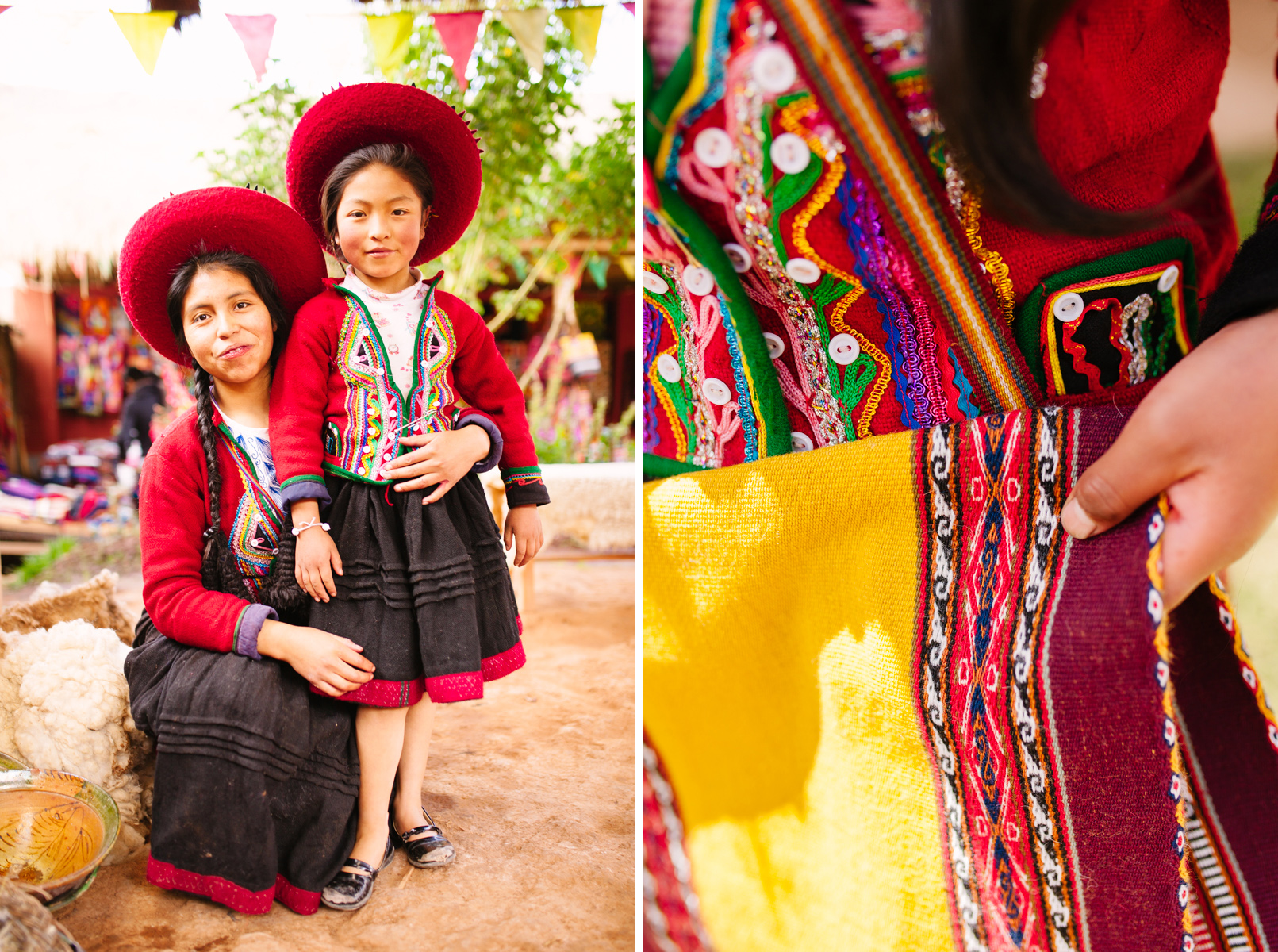 Concepcion (24) and her daughter Feliciana (7), from a traditional Quechua community near Piuray Lagoon, pose for a portrait in the weaving workshop. © Marta Tucci/Naya Traveler

“They want to change Chinchero” claims Concepcion, a weaver and mother of two. “The government has seized some land to make an international airport and made big hotels to cater to the growing tourism overwhelming the city of Cusco (50 kilometers away from Piuray). This is changing everything for us, forcing us to give up our way of life which will soon be unsustainable in competition with the growing demands of tourism.”

By the 1970s, as a result of the exponential growth of tourism in the Sacred Valley, mainly due to the popularity of Machu Picchu, Quechua weavers started to change their production. They began using aniline dyes instead of natural ones and making simple patterns on more homogenised non-traditional fabrics to keep up with the increasing demand from tourism. These new textile designs no longer reflect the ancient weaving traditions of the communities, and their culture and identity are now sadly at risk of being lost and forgotten. 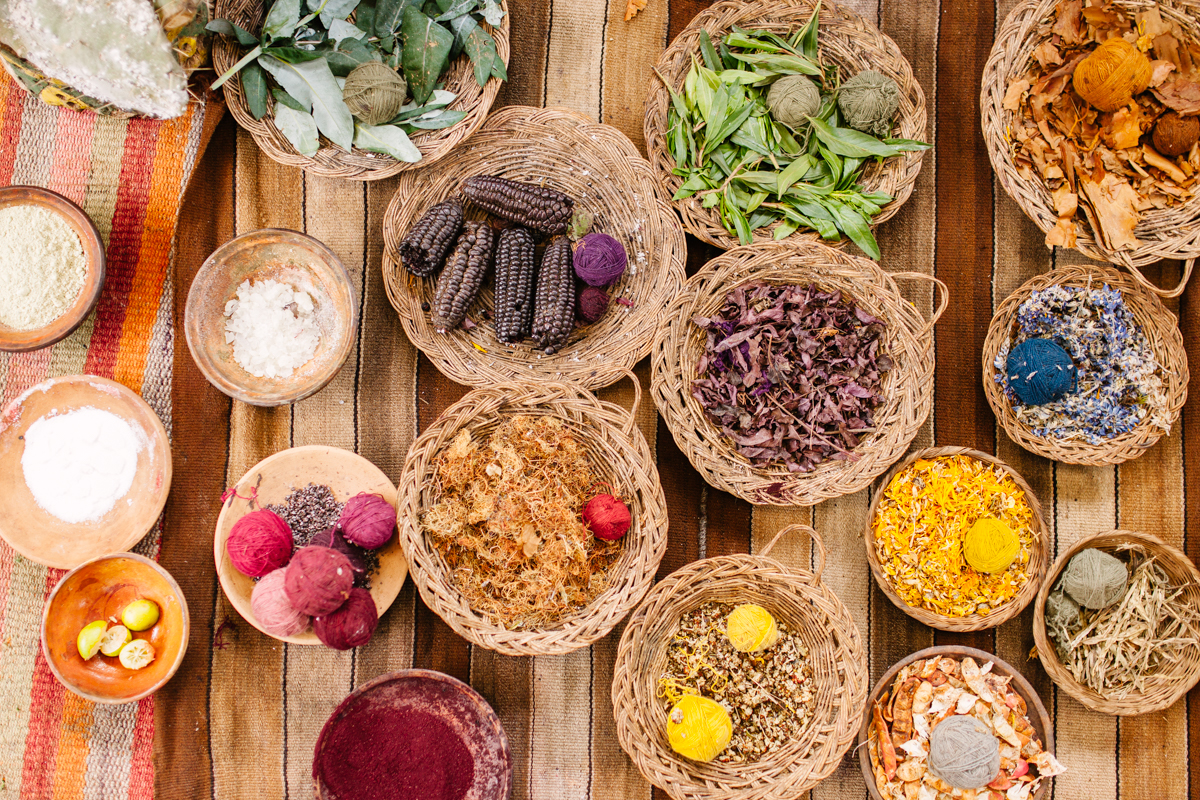 A selection of natural produce such as purple corn, green coca leaves, blue flowers, cochineal, salts and beans, all found growing in the Urubamba Valley and the Andean highlands. They are used by local Quechua communities to create natural dyes for colouring fibre and wool. © Marta Tucci/Naya Traveler

The balance between financial sustainability and sustaining the heritage of the Quechua people is a delicate one. Back in Rosemary’s home, she explains, “It is not only a cultural art form, but an integral part of our social organisation and economic situation.” She goes quiet for a while, before returning to the fibres on a drop spindle.

Although few in number, there still exist communities that remain unspoiled in the face of globalisation. In a visit to some of the less transited areas of the highlands, I discovered villages that are winning the battle to preserve their customs, despite the increasing difficulties they face. They hold firm against the alluring tide of modernity, passing down their knowledge from older to younger generations. It is my hope that they will continue do so for many years to come.

Do you want to meet the women of Piuray? Naya Traveler offers curated experimental journeys to Peru and other destinations with a strong focus on culture and local immersion.

This article originally appeared on Maptia and is republished here with permission.

CultureOn the Trail of Ancient Civilizations in Northern Peru
Tagged
Art + Architecture Culture Fashion Peru
What did you think of this story?
Meh
Good
Awesome