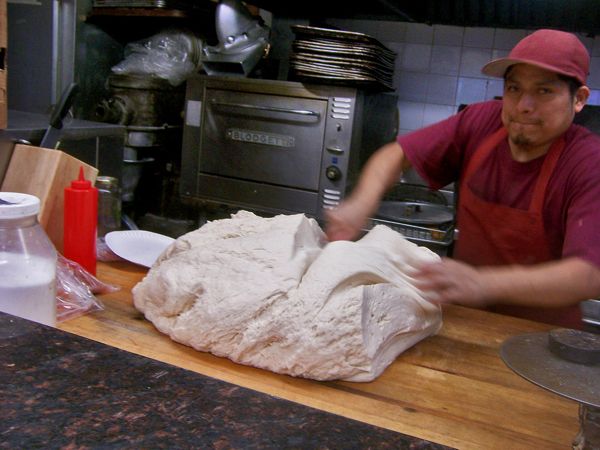 Rolling out the dough at Ben’s. Photo by contusion

Matador’s Tom Gates moved to LA in January, left to only dream of his favorite New York City restaurants. He shares them here.

This is a neighborhood pub, off the radar for most reviewers, a boisterous bar with about 25 tables and some supremely great wine choices. The restaurant feels like something that Paul Revere might have eaten at – lots of brick, wood and low ceilings. So charming, in fact, that you should break the rule and bring a Trojan on the first date, because you’re getting laid if you have half a game and start the night here.

New York Deli sandwiches are dreamt of worldwide but the truth is that most of them suck – crackled bread, questionable meat, bottom shelf mayonnaise. Toasties (embarrassing to say out loud – “Meet me at Toasties.”) pounds the nail straight into the stud. 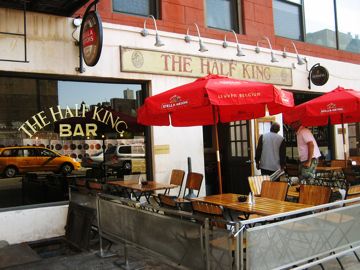 The Half King. Photo by roboppy

Three locations serve unreal sandwiches. The Alice is a work of art; a combination of turkey breast, brie cheese, granny smith apples, Romaine lettuce, and honey mustard. The Smoke Jack does me in every time – turkey with melted jack cheese, bacon, sundried-tomato pate and honey Dijon.

Toppings can be mixed, matched and manifested. Their breakfast sandwiches will leave you full all day. This is a sandwich as good as any New Yorker dreams of.

Every New Yorker has their favorite Thai place and this is mine. Reasonably priced for New York, the food is simple and perfect. The décor is a bit much but that’s never distracted me from having a fantastic bowl of Tom Kha, or indulging in their peanut curry.

Suitable for an early dinner with friends, or a blind date from the internet.

I’d rather not muck about with waiting in line with tourists for some bulge-eyed pizza – this is as good as any other famous brick oven pizzeria. Patsy’s has a few locations in the city but doesn’t feel like a chain. Even a Jersey Girl could dig it.

The pizza is as good as it gets, with fresh cheese and slightly charred crust. Their family sized salads are great to share and do like I do; get a side of their sweet, homemade marinara to dip your bread in. Classy? No. Great? Yes. 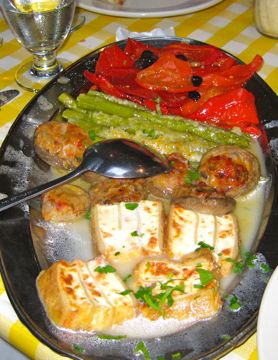 Owned by writer Sebastian Junger, The Half King dishes out “pub food done right.” It’s an excellent place to have a proper Sunday Brunch, especially if you’re from the UK and crave some bangers or beans. The fish & chips is my favorite, heaped onto a plate with a side of some tart and tasty cole slaw.

There’s a small back garden with about ten tables, the kind of tiny space that New Yorkers covet. Great for birthday dinners and dates from the internet.

Awkwardly located around the corner from The Empire State Building, Sen Nin is a bit of a ghost town at night, yet entirely packed at lunchtime. Don’t let the half-filled room fool you – this is some of the best sushi in the city. And it isn’t cheap.

The rolls are heaping, often covered with multi-colored roe – as much spectacle as fresh, incredible fish. I’m addicted to the tuna tatake salad (with crunchy pieces of garlic) and the simple Sunny California roll (brown rice, crab, avocado and mango). I’ve twice gone for a sushi boat and both times left feeling like a prince or a king or a queen. I’d go here before Nobu or Blue Ribbon, because I am a true sushi ninja.

Most of the time, this is a fratty Mexican place that feels like a bar, with booths and strong drinks. I would never show up on a weeknight when it’s stuffed with people downing pitchers of margaritas, crushing on members of the opposite sex or getting plowed during Tuesday Night Bingo.

For me, it’s all about Sunday at noon, when the place is mostly empty. I’ll take down a Frisbee-sized quesadilla grande, gorge on chips & salsa and probably make the move towards a second or third margarita, not leaving until I am stumbly and bloated. Elvis and Ramones might blast on the system, but so might Three Dog Night or Foreigner.

Many, many times I’ve sat here for hours, reading the New York Times and having a “quiet moment” in this normally raucous establishment. If it matters to you, several times I’ve also been in the company of neighborhood celebrities doing the exact same thing. 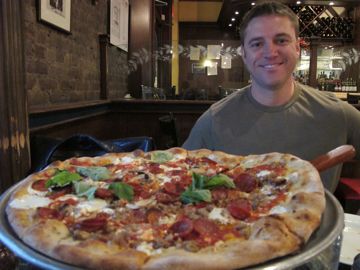 This is the pizza I dream about, the stuff that makes me forget all about the worst pizzas in the world. The sauce has a sweet, salty taste and the cheese is piled on high. Ask for a pie with garlic and you’ll be unkissable for months.

To me this is event pizza, something ordered for special occasions, like The Superbowl or a Survivor finale. The pie travels well – order ahead a full pizza, pick it up in a cab and make it home in time for whatever television gets you off.

The men who work here are all business, with zero tolerance for people in line that hem and haw over decisions. Fast moves will gain you points.

Be prepared for sticker shock: unless you’re a Friend of Bill, you’re not getting out of here for less than $50. Worse, crowds can swarm this place and I tend to arrive on the early side, around 6:30, which isn’t even close to hip.

Little Italy enthusiasts might poo-poo this place in favor of something more high-brow – I’d give them a few fingers under the chin right back. Once a tiny space, La Mela has crept into three neighboring storefronts and remains a huge favorite for me.

There is a menu, but it should be ignored. Just say the word (“family style”) and a handful of courses will come your way until you pray for mercy. Big hunks of fresh mozzarella caprese, oodles of al dente pasta and a dessert plate that makes me squirm in my chair as I write this.

The staff is a hoot and, some nights, the place takes on the festive feel of a family restaurant in Italy – hands-over-elbows, big bottles of cheap wine, cramped quarters, families just a table away from young lovers.

Ask me about the time that I took Slipknot here.