1. You’ve taken shots with a Ben Franklin impersonator and didn’t even notice.

2. You’ve gotten drunk and danced with the Mummers.

3. You insist that the drunker you get the easier it is to solve the puzzles on the bottom of Lionshead bottle tops.

4. Yeah, you love your Troegs, Victory, and Weyerbacher, but you feel no shame in drinking an old standard like Iron City, Lion, or Yuengling. However, if you drink IC Light Mango you will be judged. By me.

5. Most of your drunk food comes from Wawa or Sheetz.

7. You were genuinely pissed when Anheuser-Bush bought Rolling Rock and moved production to New Jersey, the third state. What a copycat.

8. You believe that if someone can’t name at least twenty bars on East Carson Street, they clearly have never been there.

9. You will inform anyone who will listen that Yuengling is our country’s oldest operating brewery. And, fun fact: during the prohibition era, Yuengling began producing ice cream to make up for lost beer sales. Today, you give them extra support by buying their wing sauce and barbeque sauce. Also, you appreciate their really cute logo with puppies on it. 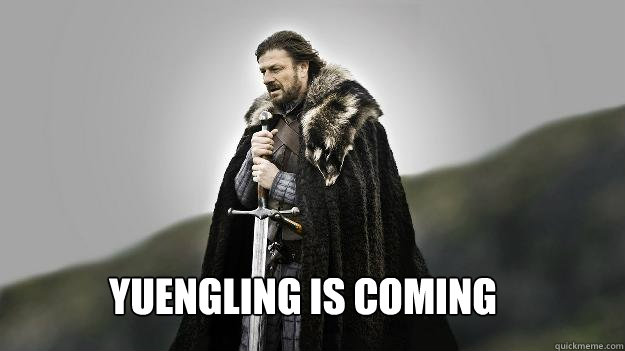 10. You remember this one time, when you drunkenly ordered a cheesesteak with JUST wiz. No steak.

11. When you drink, you can’t keep your Pittsburgh accent from coming out. “Yinz goin aht dahntahn n’at?”

13. You consider it a violation of your first amendment rights that you cannot have wine delivered to your home.

15. Whether you root for the Iggles (Eagles) or the Stillers (Steelers), you tailgate at football games you’re not even attending. And baseball games. And hockey games. And concerts. Your kid’s little league game. Your grandad’s funeral. Tailgating is basically your PA state pastime.

16. You wish Paddy’s Pub from It’s Always Sunny was a real place, and you sing Flip-a-delphia whenever you play Flip Cup. Flip-flip-flip –a-delphia.

17. You know if you need a 6-pack, a case of beer, and a bottle of jack to pregame for the 2016 Republican primary, you will likely have to drive to three different stores. Because finding beer, wine, and spirits in PA is almost as hard as finding a viable GOP candidate.

18. You were part of the Kenney Chesney Tailgate-gate in 2013 that left the Heinz Field parking lot country music’ed (aka: completely trashed).

20. You’ve been stupid drunk just pregaming at Penn State and you didn’t even go there. Or, you did go there and for you it was just a regular Tuesday night.

21. You’re very proud of the fact that Philly is largely responsible for the popularity of ‘quizo,’ aka ‘pub trivia,’ aka ‘a legit reason to hit the bar on weekdays.’