DON’T GET ME WRONG, it’s got a lot of other stuff going for it. But as an island that claims agriculture as its main economic activity; as the “Garden of Québec;” as one of the first parts of the province to be colonized by the French…like I said, this place is for the foodies.

The only way to get to Île d’Orléans is on the bridge from Beauport, which takes you onto Route 368, a road that loops the island. Get off the bridge, take a left, and get ready to eat. 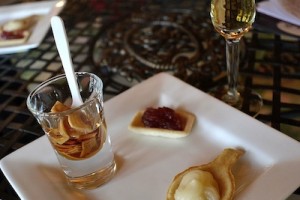 The Cidrerie Verger Bilodeau sits on a 6-acre orchard that produces beautiful apples made into cider on-site – it was actually the first cider house on the island. Le Petit Bonheur includes maple syrup and is quite mellow, while La Tentation is stronger and has the added flavor of strawberries. Le Petit Pommier is light and (in my opinion) a good standard cider to go with, and the Nectar de Glace is an ice cider that makes a great dessert accompaniment.

Not all of the apples get turned into cider; this cidrerie also sells apple butter, cider jelly (yup, get your toast drunk), apple mustard, apple syrup (try it on crepes), super healthy apple cider vinegar, and of course, apple juice. 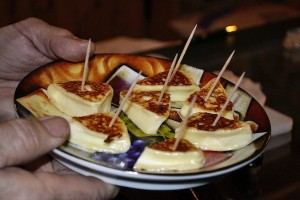 Owners Jocelyn Labbé and Diane Marcoux are keeping the tradition of Le Paillasson, the oldest cheese in North America, dating back to 1635. This cheese was popular to make at home, and because it’s neutral (not alkaline), it doesn’t melt when cooked. Le Paillasson is most often served baked, broiled, or grilled. The taste is fresh, creamy, and salty, and it squeaks pleasantly against your teeth like curds.

If you stopped at the cidrerie first, here’s an idea: get a baguette and toast a few slices topped with Le Paillasson, then smear on a little apple butter. This is one of those times when eating local seriously rocks. 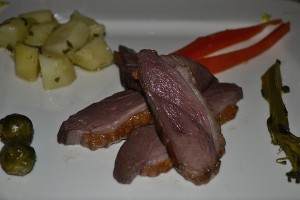 That’s quite a name. I refer to it as “the awesome goose place.” This stop – which includes a restaurant, farm, and garden – is run entirely by Jacques Legros and his wife. And I mean entirely.

They raise the geese, chickens, and ducks for eggs and meat, and the phrase “free range” is quite literal – many will likely greet you when you step out of the car. Jacques has also developed a method for producing amazing foie gras without force-feeding his ducks.

The garden? Not only does this couple plant, tend, and harvest it themselves, they do so without machines. “Nothing with a motor,” Jacques said. “It packs the dirt down hard; it’s bad for the worms.” To illustrate his point, he used a shovel and his hands to uproot the most massive celery plant I’ve ever seen.

The menu at the restaurant serves 90% ingredients from the farm, 10% other locally sourced ingredients. No butter – your potatoes are cooked in goose fat. And I wasn’t joking when I said this couple runs the place – there are no waiters, no kitchen staff. They pour your drinks, take your orders, cook your food, clear your plates. Understandably, you need to make reservations in advance. It’s worth it. 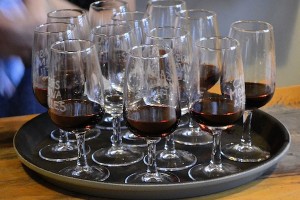 Last stop – this wine cellar and boutique is located right by the bridge, so you can swing by on your way out of (or onto) the island. Bernard Monna, a Southern France native, settled here in the early ’70s and quickly realized that the climate was perfect for growing black currants.

Now his daughters Catherine and Anne are running the family business — a business which includes 5 hectares of land and produces over 30,000 bottles of award-winning cassis, wines, and other liquors a year. (Most recently, their Créme de cassis took the bronze medal at the 2011 International Wine & Spirit Competition in England.)

If you’re visiting in the summer, try a cold sangria made with their Le Fruité, an amazing black currant wine. Take home a bottle of the Créme de cassis to make one of the best kir (add white wine) or kir royales (add champagne) you’ll ever drink. Non-alcoholic products, such as black currant jams, mustards, and jellies, are also available (and delicious).

Thank you to the Québec Ministry of Tourism and Québec City Tourism for sponsoring my trip.

Tagged
Restaurants + Bars Québec, Canada
What did you think of this story?
Meh
Good
Awesome