PLENTY OF WRITERS, myself included, put out lists of things — festivals, cafes, bars — that are a mix of actual experience and desk research. I thought I’d go with all experience for this one. I left my hotel in downtown Montreal at 10:30 Saturday morning and returned at 5:30 bouncing off the walls.

If you can’t find a seat and an outlet, you’re seriously unlucky. This cafe is made up of two pretty huge rooms with a good combination of tables, half-booths, and armchairs. There’s also one massive table with ten chairs around it if you’re working on a group project (or if you just really need to spread your stuff out).

Like a few of the cafes on this list, this one is part of a chain. I passed two other Presse Cafés later in the afternoon. I’m pretty sure this one had the most seating.

Again, this one is part of a chain — like Tully’s in Seattle (or Starbucks anywhere), it seems there’s a Second Cup every other block. This particular location has an enormous patio, half covered, half under the shade of a few trees. Inside are tables, a few armchairs, and bar seating. The outlet situation is good. 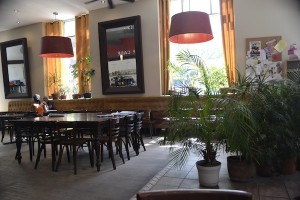 I read somewhere online that this was the place for West Coast coffee snobs in Montreal. My cappuccino was indeed delicious and topped with lovely foam art. Between that and the baristas deep in conversation about their band, I was definitely having some Capitol Hill flashbacks.

This isn’t the biggest cafe, but there’s a decent amount of tables. I hung out in the little back room, which has seven armchairs and about as many outlets.

Another chain, but interestingly, they don’t seem to have a specific “look” on the outside or inside. Mine actually had no outlets, but there were a ton of tables. There’s also a lot of natural light, so this one is a good choice for writing writing (aka, with your hand and a pen).

I poked my head in the Van Houtte in Old Montreal and the outlet situation looked to be a bit better, although the cafe was smaller overall. The hours vary from store to store, too; I passed another one farther south that was closed on the weekends.

I actually tried the Dépôt on Rue Sainte-Catherine first; it’s big and comfortable and has a nice patio. But as it also happens to be across from one of the biggest stages at the Montreal Jazz Festival, it was understandably packed on this particular Saturday.

Instead, I walked a few blocks and set up shop in the one on Kennedy. Bonus: It’s connected to a convenience store, so if coffee isn’t breaking your writer’s block, maybe a six-pack will. I get the feeling this Dépôt is sort of overlooked, maybe because there are so many bigger cafes in the vicinity. But there are a few tables with outlets, and the peace and quiet is nice. 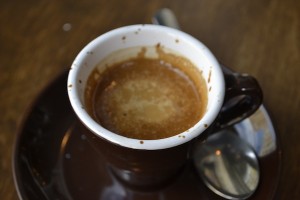 Espresso at Pikolo (Photo by author)

It’s located in Old Montreal, but the cafe is very new and trendy-looking. While there are plenty of tables and seats, I only spotted one place to plug in: a bar with four chairs facing the wall, where you can hunch over and work away with your back to all the socialness.

The higher the quality of an iced americano, the less sugar I add. I drank this one unsweetened.

After Veritas, I’d reached my caffeine-limit. (Full disclosure: I had two glasses of wine between Van Houtte and Depot to try and cut the buzz.) But as I was heading into my hotel, I noticed this place next door and figured what the hell.

It’s small, but feels very ‘writerly.’ Maybe it’s the fact that the chairs look like they’ve seen better days in a Catholic school three decades ago. Maybe it’s the tiny upstairs loft, crowded with 20-somethings on laptops. Maybe it’s the Papaterie next door. At any rate, I stuck around long enough to justify another shot.

Tagged
Travel Montreal, Canada
What did you think of this story?
Meh
Good
Awesome

I traveled to South Africa during Omicron. This is what it was like.
11 of the deadliest concert disasters in recent history
The best Airbnbs in Nashville for a bachelorette getaway
The optimal itinerary for a US national park road trip, mapped
The most scenic and luxurious train rides in the world, according to the Man in Seat 61
✖
travelstoke
Download the mobile app
stoked by