The ten days I spent at the Calgary Stampede were probably the unhealthiest of my life. I returned home dehydrated, dejected, and overcome by the gloom associated with the aftermath of intense partying. Ah, the real world…void of handsome cowboys wearing Wrangler jeans. I never want to hear another Tim McGraw song for the rest of my life.

This was my first Stampede experience. One of my more memorable days (funny how alcohol works) was organizing a self-made “food crawl” with my girlfriends. You can really find the most absurd shit on the Stampede grounds. 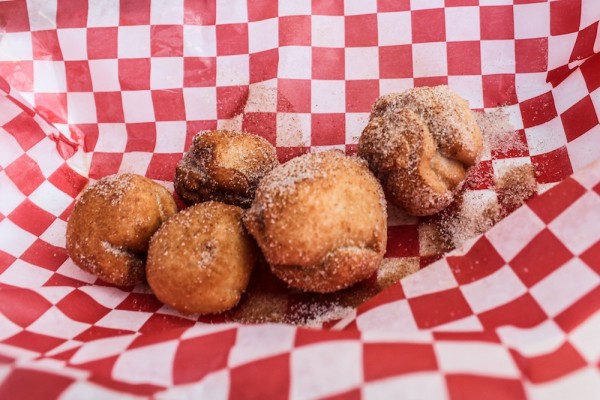 My ultimate goal was to basically give myself a heart attack. I nearly succeeded.

The butter is deep-fried in little balls and coated in cinnamon and sugar. The weird thing is…it actually didn’t taste all that bad. Like, at all.

Some of my friends couldn’t be arsed to try it. Most people hovered around the balls in apprehension, likely waiting for us to keel over and die. Strangers moved in, snapping photos. But we ate those balls. Oh yes, we did.

This one was totally genius. I wish I had never encountered it, because now I am inclined to stay home every weekend and make my own taco-in-a-bag while watching chick flicks in my pajamas.

Take a bag of Doritos, and squish it into itty-bitty pieces. Using scissors, cut one side of the bag so it opens like a pocket. Scoop in your seasoned beef, cheese, and taco toppings, add a dollop of sour cream, and you’ve got the kind of no-mess taco that dreams are made of. You’re welcome.

This is exactly what you think it is — big, juicy pieces of bacon covered in warm chocolate. The girls loved this one, but I wasn’t sold on the whole meat-turned-dessert idea. It tasted just fine, but in small quantities.

I’m also impressed that the bacon managed to stay on the stick.

“Aren’t Doritos already deep fried?” someone asked. This is true.

But if you’re in the mood to really blow up your arteries, it’s an interesting treat to try. I personally found that the deep-frying robbed the Doritos of their flavor, but there was a big enough portion to share with the whole crew…and I ate them anyway.

I actually saw this delicacy at a bunch of restaurants around Calgary, and tried my first bite at Roosevelt. I’m a big fan of mac ‘n cheese, and I feel like the deep-frying part just makes so much sense.

I tried a swankier version at the Lazy S, a restaurant in the Grandstand overlooking the rodeo. This mac ‘n cheese had crab meat mixed in with the pasta, which made me feel like, you know, I was getting some sort of vitamins. 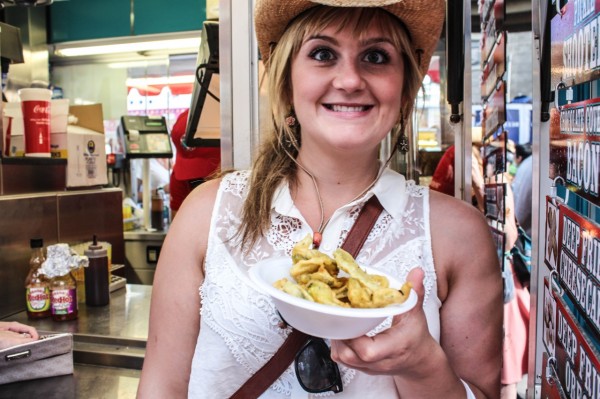 Apparently the pickles thing is fairly common, but I hadn’t tried it before and neither had my friends. Oddly, it complemented our chocolate-covered bacon. The beans were much the same.

We were really trying to meet the standards set by Canada’s Food Guide with these babies.

I often have to wonder who thinks up this stuff. Who looks at a piece of Dubble Bubble and thinks, “Geez, what would this taste like if I fried it in fat?” Turns out it tastes sorta marshmallow-y, and the gum mostly loses its chewiness.

Consider it dessert after your deep-fried pickles.

I tried mere morsels of these, at a later date, because I took a good hard look at my life and realized I was on a fast track to doom and decay. But hey, the option is there.

These were only three of the many unusual desserts on the grounds — the others included the likes of chocolate-dipped jalapenos, chocolate-covered frozen bananas, and chocolate bacon apples.

Again, the name doesn’t leave much to the imagination. If you like corndogs and if you like bacon, why not wrap your corndog in bacon? Brilliant logic.

I didn’t get to try the other weird and wonderful items, like the deep-fried avocado, or the Prairie Oysters, unfortunately. (The restaurants kept running out of bull testicles. Apparently I wasn’t the only one who wanted to eat balls.) But if I don’t meet obesity criteria by next July, I’ll give it another shot.

Note: A portion of Candice’s trip to the Calgary Stampede was sponsored by Visit Calgary.

Tagged
Events Food + Drink Calgary, Canada
What did you think of this story?
Meh
Good
Awesome

From the Prairies To the Mountains: Country Music in Calgary, Alberta

How To Spend 24 Hours in Calgary, Alberta

Life on the Calgary Stampede Ranch

How To Be a Bull Rider at the Calgary Stampede

7 Myths About Animal Treatment at the Calgary Stampede Rodeo

Uncovering the Indian Village at the Calgary Stampede

Eating Balls at the Calgary Stampede