CHEF AARON SCHERR hands me his balls. They are grey and spongy, and while I’d like to think they look like something else, there’s no getting past the fact that these balls are, in fact, balls.

For 18 years, Buzzards Restaurant has been serving Prairie Oysters on the menu, a highlight of its Stampede offering. A cowboy would have to look long and far to find the sea in the prairies. These oysters are as removed from seafood as a horse on the moon, although they do bare relation to their cousins, Rocky Mountain Oysters, south across the border.

See, in order for cattle farmers to control their stock, male calves must be castrated. Typically this is done when they are branded; alternatively, their nuts are tied with elastic and eventually fall off to be eaten by coyotes.

Some balls make their way to Buzzards, which has thought of creative means to cook, grill, and sauté them for the brave and hungry. Last year’s dish was called the Crown Jewels, in honor of a visit to Calgary by William and Kate, and the fact that Crown Royal whisky was added for flavor.

Aaron takes me into the kitchen, hands me a ball and a sharp knife. I make a cut right at the top, and ask him if this makes it kosher. Nary a sentence passes without a pun. Seriously, I must sprinkle on nuts? Have you lost your marbles? Be careful, or you might get the sack.

I slice the organ, rich in protein, into thin coin-sized medallions. Over the stove, Aaron adds maple butter under high heat, some whisky, au jus, salt, and freshly cut strawberries and gooseberries. For all its novelty on Buzzarrd’s otherwise excellent menu (AAA grade beef and sustainable seafood), Prairie Oysters receive a lot of attention. Buses of Japanese tourists might arrive specifically to try them. Over 10 days, Aaron might burn through 100kgs of cajones.

It’s a full-on testicle spectacle, which can be hard-on the kitchen. Ahem. 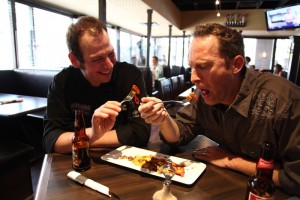 Sourcing the bull balls has become a bit of problem. Few large meat packers will tickle this soft market, but Aaron has found some farms in his native Saskatoon to come to the rescue. He even prepared some bison nuts recently, which were bigger than baseballs. It was a home run.

We take the Crown Jewels to the table, and I stare at them anxiously. I’m no vegetarian. In my travels I have been fortunate to sample crickets (legs get stuck in the teeth), termites (taste nutty), deep fried guinea pig (stringy chicken), fermented horse piss (acidic), and crocodile (less stringy chicken).

I confess I like liver, another vital organ, which shares the same consistency as Prairie Oysters. Still, there’s a mental challenge when it comes to eating balls. But I didn’t want to rub Aaron up the wrong way either, since he’s obviously proud of this year’s recipe, of Buzzards, and its adjacent Bottlescrew Bills pub.

I ask for two bottles of beer, and pull out my favorite souvenir of all time: a genuine, 100% authentic hairy kangaroo scrotum bottle opener, picked up in Australia. Aaron thinks I might be yanking his chain, but if you’re going to have a theme meal, you might as well go balls to the wall.

I fork up the oysters with some of the fruit, and put it in my mouth. My immediate reaction is to swallow quick, but I want to savour the moment. It tastes like…well, it tastes like balls. “I don’t see what the fuss is about,” says a female friend. “We’re putting balls in our mouths all the time.”

In the end, culture determines what we find acceptable to consume, and what we don’t. Eating the gonads of a raging bull, which carry flavor rather well, is deemed unacceptable by the same society that will happily nosh on pigfeet, liver, rump, and halibut cheeks. The bulls get the snip either way, but I guess it keeps them coyotes happy.

I traveled to South Africa during Omicron. This is what it was like.
Travelers are sharing the biggest culture shocks they experienced in the US
The optimal itinerary for a US national park road trip, mapped
The 22 places you need to travel in 2022
11 of the deadliest concert disasters in recent history
✖
travelstoke
Download the mobile app
stoked by