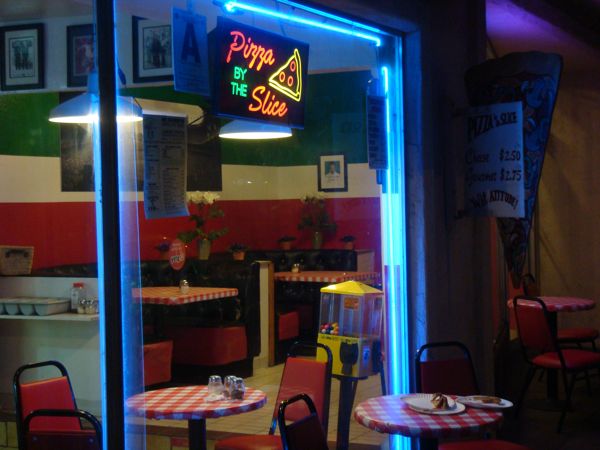 Nostalgic for East Coast pizza, Morgan Leahy visited over forty of San Diego’s pizza joints during three months, hoping to find the perfect pie. She gives us five that passed the test.

I GREW UP IN New Jersey and, at a very young age, I learned a rule from my dad that I adhered to for a long time – never eat pizza south of Philadelphia or west of Trenton. There was no rule about how north was too north, but I always assumed it was somewhere in Connecticut.

I live in San Diego now and, on a recent trip home, I broke the news to my family that I liked the pizza in California. At first they were shocked. Then they offered me a challenge – find a real New York Style pizza in San Diego. Hopefully they wouldn’t be among the worst in the world.

I gauged each restaurant in comparison with a Platonic ideal of a pizzeria; the pizza’s look (greasy, sort of burned on top with a crisp doughy outer crust and a very thin bottom crust), the pizza’s taste (spicy sauce, cheesy but not too cheesy) and of course the pizzeria’s décor. 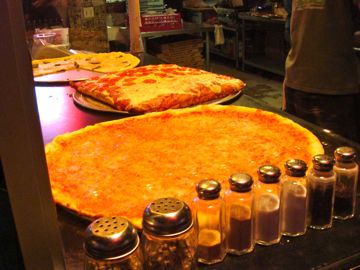 Hoboken is named after a city in New Jersey, the birthplace of Sinatra. I was pretty excited the first time that I tried their pizza. I felt like I was back in my hometown. It might have been the Bruce Springsteen posters on the walls or the Rutgers t-shirt that the pizza chef was wearing, but it felt authentic.

This little black building is dimly light, a no-frills store front with ripped black vinyl booths. It is on one of the busiest blocks in Pacific Beach, the young party neighborhood of San Diego.

Be prepared for a hot slice of pizza. Really hot. It will be crispy but so floppy you may have to fold it.

For me, one signature of a good New York style pizza is the grease, and Hoboken has got it. Don’t blot your pizza with a napkin, even if you end up with a completely see-through paper plate when you’re done eating. This laid-back pizzeria is the type of place you can crack open a grape soda, cover your slice with parmesan and oregano and watch a couple of innings of the Yankees game. 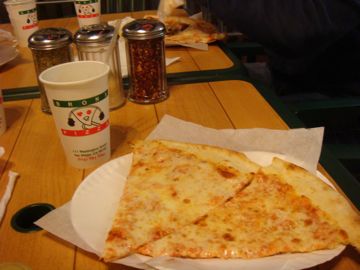 I ate only plain slices for this project and really paid attention to the sauce – theirs is so tangy that it is almost spicy (so memorable a taste that I compared every other pizza’s sauce to theirs). Their crust is great too.

When ordering a slice of pizza, it should be reheated for you in an oven. That is a fact. Sometimes, it will be a little blackened. Unavoidable. But it should never taste like it was just on fire. Luigi’s does a better job of this than any other pizzeria that I have tried because their thin crust is both crunchy and soft.

My husband and I can’t agree on which pizzeria from New Jersey is our favorite but we both think that Luigi’s is the best in San Diego. 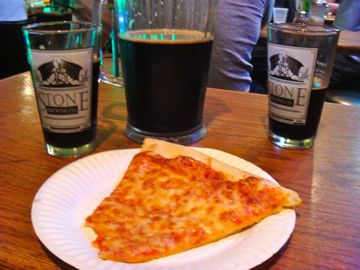 This pizzeria and bar is a couple of blocks from the Ocean Beach Pier. You can see the water from their dog and cigarette-friendly patio. There is often a crowd on the patio boisterously interacting with anyone walking on the side walk

Newport is usually crowded and loud. The beer list has some craft beer that I have never heard of. Before this project I had tried a few of their pizzas like “The Hulk” (Pesto, Artichoke Hearts, Sun Dried Tomato, Mushroom & Olive-Feta) and “The Homer Simpson” (Chicken, Honey Mustard, Onion & Cheddar), which are what I consider West Coast style but the cheese slice (AKA The Chuck Norris) is definitely a classic New York style slice. Definitely a topping lover’s haven.

Be prepared to eat and drink more than you meant to at Newport Pizza.

Lefty’s is advertised as a Chicago style pizzeria, and it is, but it is included in this list because they had two types of cheese pizza. The thinner crust was a true New York style pie. Their pizza has a liberal dose of sauce and a great deal of cheese. Overall a pretty big mess. I think that might be the best part about Lefty’s; they know their homemade sauce and their cheese are good so they give you twice as much of both.

When I first visited, there was a lot of commotion and talking and yelling and PBR on tap and the wearing of Chicago Cubs hats. I went back a second time and found more of the same. The sassy girls behind the counter make me laugh. I will be back for a third time. 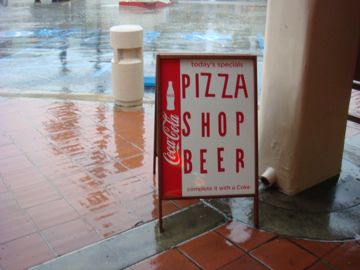 Bronx was recommended by a few New York natives. The New York paraphernalia (although there is a lot of it) didn’t seem annoying and I felt at home with the pizza guys yelling at me to come pick up my slices, already. If you are ordering a whole pie, try to get someone’s attention through the window outside. If you are ordering slices, walk inside and pick something they have in the case.

The slices, by the way, are pretty great.

Theirs is a pizza dedicated to cheese and a thin crust. I appreciate that. It was difficult to only order a basic cheese slice on the day I tested Bronx Pizza, because the white and pepperoni slices (they only serve the classics) looked so good. The rumor around town (and the internet) is that they have water from The Bronx shipped in to make their perfect crusts.

Where’s your perfect Southern California slice? We’d love to hear about it in the replies.

Matador will eat you around the world. From binge eating in Berlin to attacking churrasco in Brazil to asian rooster balls, you can eat it all here.

9 Ways To Save Money in San Diego

5 Great Spots To Eat and Drink at in San Diego

You Can Now Visit an Entire Museum Devoted To Avocados, Millennials