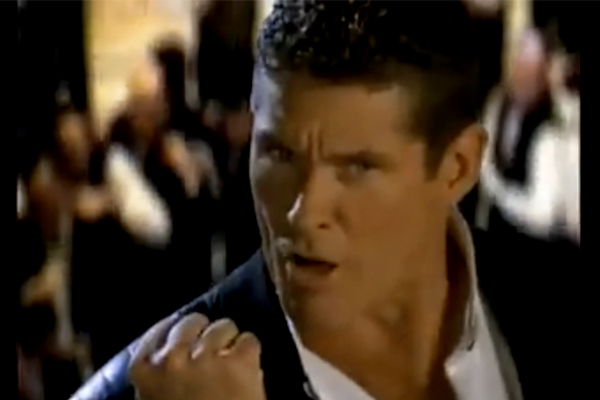 Feature Photo by jason.rojas, This photo still from Hooked on a Feeling video

Today is a symbolic date for Berliners.

ON THIS DAY IN 1961, the border with West Berlin was finally closed by East German troops who were fed up with their citizens fleeing westwards. A barbed wire fence was erected, followed swiftly by a 100-mile length of prefabricated concrete that divided the city in half.

Xianfeng, Emperor of China was born on this day, as was Ismail I, Shah of Persia. But on this day in 1952 a different kind of man was born, one that would play a much greater role in human history. A man whose deeds would change and shape the world as we know it and would influence our lives in ways we have yet to realize.

That man is David Hasselhoff, otherwise known as “The Hoff”.

What has The Hoff got to do with The Berlin Wall? A lot, as it happens.

As the above footage shows, he not only helped bring it down and effectively bring an end to the cold war, he did so while sporting a leather jacket festooned with flashing light bulbs, and belting out his 1989 German chart hit “Looking For Freedom.”

The Hoff is a certified Übermensch. He is a phenomenal individual who can run for ages in slow motion. He exudes more cheese than France and boasts a cult following – largely ironic, admittedly – to rival that of Chuck Norris. This is a man who once said he’d like to buy a castle just so he could call it The Hassle Castle.

Let’s not forget that The Hoff is the original hunk-in-trunks. Not only did he became famous for conversing with a car (Knight Rider) but he played LA lifeguard Mitch Buchannon so well that The Guinness Book of World Records has Baywatch down as the most watched TV show in the world with over 1.1 billion viewers.

What it doesn’t tell us is that most of them tuned in to gawk, awestruck, at The Hoff’s prodigious chest hair, which looks like someone paints his torso with glue and makes him do push ups on a busy hairdresser’s floor late on a Saturday afternoon.

Cynics may say The Hoff’s singing on the Berlin wall was simply a case of one unwanted erection dancing on another. Those same people would no doubt put the reunification of Germany down to the natural thawing of the cold war, the dissatisfaction of the East Berliners, the decline of the Soviet Union.

Hoff’s role in Germany’s new-found unity cannot be overstated, as he himself pointed out by expressing indignation in this BBC article that there was no picture of him in the Berlin Museum at Checkpoint Charlie.

Despite going on to parody himself in movies like SpongeBob SquarePants Movie, Dodgeball (where he smashes a photo of himself in his Baywatch guise), and 2004’s A Dirty Shame (where he defecates in an airplane washroom), and despite hitting number 3 in the UK charts with his 2006 song “Jump in My Car” (following a hugely supportive – and again, largely ironic – internet campaign) life hasn’t always been easy for The Hoff.

There have been messy divorces, viral videos highlighting his drinking problems (see directly below), and that time he managed to fall asleep during a Live Interview with GMTV in the UK. So on this most symbolic of days we’d like to raise a glass to The Hoff – a truly postmodern phenomenon that, if he didn’t exist, would have to be invented.

Hooked On A Feeling

davidhasselhoffonline.com: a place for all your Hoff realted news
knight-foundation.com: a fan site that’s in earnest or tongue in cheek, or perhaps a little of both.
http://www.esquilax.com/baywatch.com A site that posits that the Hoff is the AnitChrist (you be the judge).
www.waxhoff.com (a site that lets you wax the Hoff)
www.davidhasselhoff.com, which claims to be “The official site for all things Hoff from all around the world!”

For this year’s Berlin Wall events check out: http://www.mauerfall09.de/en/home.html
And be sure to follow The Hoff on Twitter.