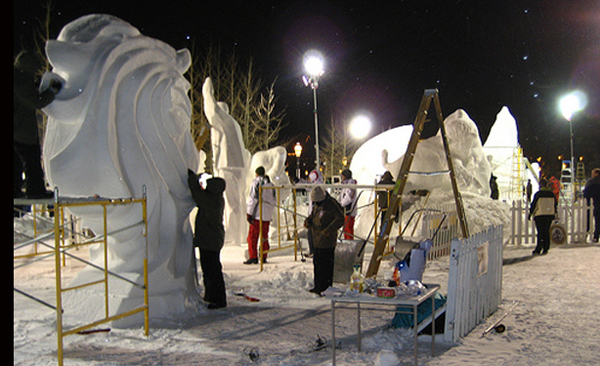 Planning a road trip through the U.S.? Here’s a calendar of festivals and parties to keep you celebrating alongside the locals each month of the year.

Some seriously impressive snow sculptures are created here. Now sponsored by Budweiser, entrants to the contest are provided with 20 ton blocks of snow which they have 65 hours to turn into gigantic, ephemeral pieces of art. Show up during the first few days and see how sculptors turn heaps of snow into temporary masterpieces, or wait until they’re finished and let the towering icy art speak for itself. 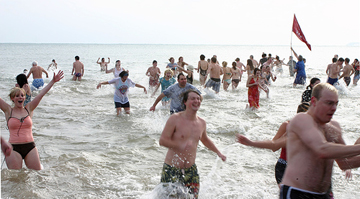 Raise at least $100 to donate to the Special Olympics, and you’ll be allowed to throw yourself into the 35-degree Atlantic Ocean! The lure is irresistible for many. Over 3,700 plungers from thousands of miles away come to town for the adrenaline rush a near-hypothermia experience will give you. 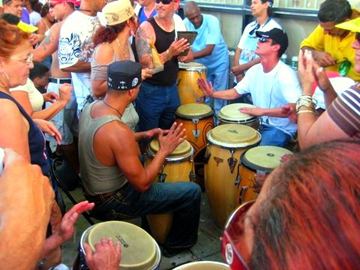 Old-world Cuba meets modern-day Miami in a party covering 23 blocks and attracting a crowd of a million. This blowout began in 1978 to celebrate Miami’s growing Cuban culture. It is the crowning event of the ten-day annual Carnaval Miami. Samba music, mojitos and ceviche are just a few attractions that give this massive party a uniquely Cuban flare.

When King David Kalakaua (AKA the Merrie Monarch) ascended to the throne of the Hawaiian Kingdom in the late 19th Century, he raised near-extinct legends and traditions up from the ashes and reversed a 70-year-old ban on hula. Now for a week each year this island celebrates the resurrection of Hawaiian culture with art exhibits, a parade, and a three-day hula competition. No showy little dance match, this championship has achieved worldwide recognition for its cultural and historic impact. 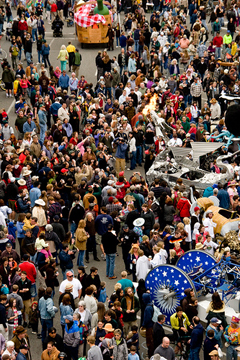 Contestants custom build amphibious kinetic sculptures in crazy and colorful shapes, get inside and race their wild works of art over land and through water along the northern coast of California. Speed is not at the top of the design qualifications list – it takes three days to travel the course’s 42 miles.

Each year, five hundred artists prove chalk isn’t just for children when they get down on the ground to create murals during this two-day festival, leaving the sidewalks looking like horizontal walls in an art gallery. The event is free and open to the public who vote for their favorite work in the People’s Choice category. Participating artists vote for their peers in the 12 remaining categories and the announcement on the winners concludes the weekend. 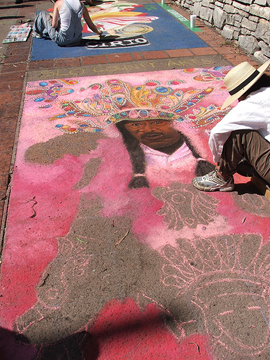 Sometimes you’ve got to grow a sense of humor or just give up. After years of suffering severe and chronic mosquito infestation, this small community in southern Texas decided to stop swatting and start partying. Now they throw a major three-day festival honoring the insects that cause them so much grief – before the weather changes and the air is too mosquito laden to go outdoors anymore.

This town on Martha’s Vineyard starts prepping themselves for the close of the season each summer by holding this one-night get-together. Residents and visitors pile into an open-air tabernacle for a sing-along in a neighborhood filled with gingerbread houses, then watch as thousands of Japanese and Chinese lanterns that have hung all week on the surrounding porches suddenly light up. It’s a bit sedate, as it should be. The tradition is 150 years old.

For 11 days and 11 nights a million people cram into the one remaining block that comprises Little Italy in Lower Manhattan, bringing back to life, for a time, the flavor that thousands of Italian immigrants brought to the area in the 20th Century. You’ll hardly be able to move at this party, but you will get to see circus sideshows, play carnival games and eat world-class cannoli. 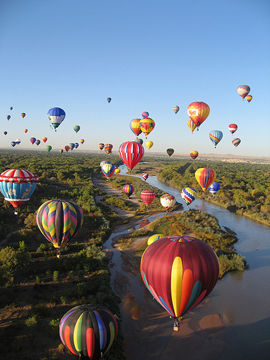 Photo from the Albuquerque International
Balloon Fiesta: Larry and Linda

Noah’s Ark, twin bumblebees, Darth Vader, a cactus plant and – oh, yeah – balloon-shaped balloons sail by the hundreds through the wide blue skies each morning of this festival’s nine days. If you want more than a watch-from-your-front-door experience, you can wake up in the middle of the night and crawl through the hours-long lines of traffic to get to a launch site, where you can check out the inflation process before the balloons hit the sky.

The country’s only unsolved hijacking is commemorated in the tiny town where a search team was headquartered to find a mysterious man who parachuted out of an airplane into the woods in 1971 with $200,000 in ransom. The Saturday following Thanksgiving, long-time D.B. Cooper buffs as well as the newly curious come together for fireworks, story telling and, of course, a look-alike contest.

Okay, the whole wide world flocks to Times Square for this party. Of course they do. You have to!