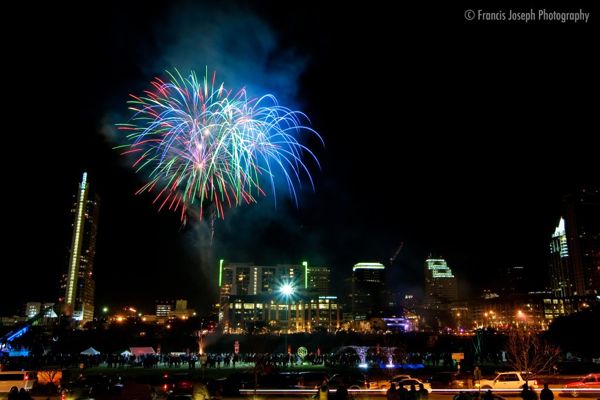 All photos courtesy of Francis Joseph

Sarah Hagerman takes a look at what Austin has in store for this year’s First Night, with everything from a flaming clock to a flotilla parade.

Austin, Texas. Known for its behemoth music festivals, its killer BBQ and keeping things “weird.” Not necessarily known for throwing a huge First Night bash. Yet for the past four years, the city has hosted the second biggest First Night in the nation with between 100,000 and 120,000 annual attendees.

Best of all, First Night Austin has always been the recession-friendly price of FREE. “I feel because it’s a nonprofit versus a for-profit event, and our patrons aren’t paying, it’s very approachable,” technical director Josh Ball says. “There’s no financial barrier holding people back from coming.” 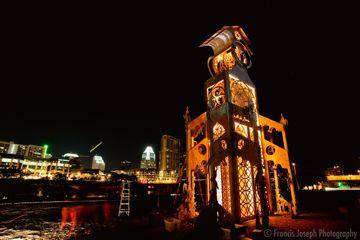 For its fifth year, the theme is “Illumination: Celebrating Austin’s Best.” About 65 groups, involving approximately 800 people, will be lighting up downtown Austin beginning in the afternoon on New Year’s Eve. From the fun run to the fireworks, groovy music to dance troupes, local cuisine to kid’s activities, there will be a wide array of attractions to keep everyone from your hyper five-year-old niece to your grumpy grandpappy happy.

Although First Nights are historically booze-free events (because who needs all those children and grandparents scarred by you mooning the living statues?) this year patrons can attend The Long First Night. A $15 in-advance ticket gets you into The Long Center, a striking building that resembles a spaceship designed by Frank Lloyd Wright, which will feature exclusive performances, food, and adult beverages. Classy!

You may want to hold off on that toast so you don’t miss the party on the streets. The biggest star of the event is the beautiful city of Austin itself, as artists turn downtown spaces into canvases and stages.

Even the Colorado River will be part of the First Night scene with the Austin Rowing Club‘s flotilla parade. “Because we work with the city, we’re able to integrate with the architecture that’s there,” curator Travis Rice describes, comparing FNA to the other Austin festivals. “That’s our key, that chance to become integrated into the space better than anybody else can.”

Plus, it’s a welcome relief to celebrate New Year in the balmy Texas outdoors instead of freezing your ass off waiting for a ball to drop, or sweating at some club, or avoiding the sketchball who’s puckering for a midnight kiss. And you never know, it could be a winter wonderland, especially if special effects mastermind Steve Wolf has his way. Rice hints, “Hopefully we’re going to bring the snow to Austin.”

Many local artists and organizations have upped their profile through their association with the event, such as the Peddling Puppeteers of Austin Bike Zoo, a fixture of the Grand Procession, and Johnny Walker, a dynamic visual artist and choreographer. 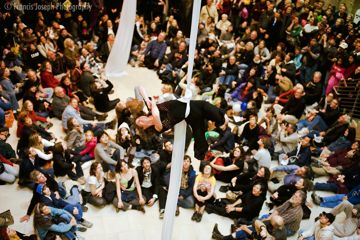 Perhaps one of the most intriguing success stories to come out of FNA is that of Community Art Makers. Their piece last year was a 34-foot tall working clock called Resolution Clock, set ablaze at midnight. CAM were offered a cornerstone piece at this year’s Burning Man, and a section of that project, The Fire Vortex, is a highly anticipated attraction (and just sounds badass).

For local companies known more for their commercial work, it’s also chance to go wild. ILIOS Lighting for example, is not just as a sponsor, but also a participant. “They come out and bring out their lighting setups and set them up in the way that they’ve always wanted to do. This is no holds barred,” Ball explains. “They did an amazing installation last year and I can expect nothing less than that this year.”

Meanwhile Ion Art, known for its neon signs which grace many well-known Austin restaurants, will be utilizing the front of the gold LEEDs-certified City Hall to bracket their intriguing installation. “It’s based on a child’s toy,” Rice describes excitedly, not wanting to give too much away. “It’s neon and it’s got energy and movement.” 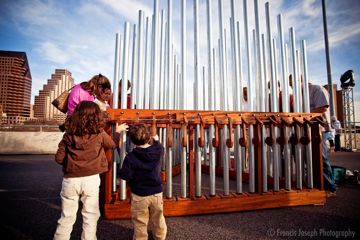 Sound at Auditorium Shores will be provided by Sustainable Waves, who use solar energy to power their LED lights and hi-output/low-power speakers. They will also have music on their own mobile stage, a converted 1970’s fire truck.

What makes this all the more amazing is First Night faced some steep hurdles this year. With the recession hitting arts funding hard, the organizers found themselves with roughly a fifth of the budget they had last year.

With the monetary carrot yanked away, an ethos of arts for art’s sake will take over, as artists and community organizations volunteer their time. Groups such as CMA have been pitching in their own independent fund raising.

Many are cultivating crucial relationships with local business donors, such as artists Danielle and Jason Mika and their JOY: Commissioned by Seton project. The swings are outfitted with solar-powered LED lights that will change colors when moving, creating visual patterns throughout the night. After New Years, the swings will be installed at Dell Children’s Hospital.

Despite the challenges, the organizers are confident they will be able to put on event as utterly unforgettable as years past. As Ball states, “It’s a bit more representative of the spirit and body of what it should be than maybe what we’ve been able to do in the past because the relationships that were based on just the financial aspect of it are no longer valid. It’s based more upon people that really care about what First Night brings to the community.” When creativity, generosity, and Austin pride come together, it’s a reason to celebrate.

The full list of artists and performers for First Night Austin 2010 is up now. Check their website for more details.

The 50 greatest campfire songs of all time
21 drinking games you can play in any bar
Why does ‘yellow filter’ keep popping up in American movies?
9 movies filmed in Hawaii that will make you want to travel there
Americans are rushing to buy a second passport, and here’s what it takes