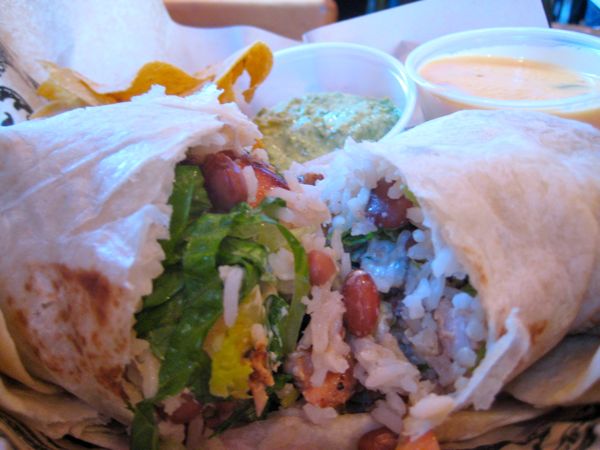 Boulder was just sitting right there with a B, asking for the same treatment (read: binge eating) that Tom Gates has given Berlin, Bangkok and Buenos Aires. Here’s what he crammed into his face over 48 hours in Boulder, and where.

The two locations in Boulder see an enormous amount of traffic. There was a line out the door when I arrived. I didn’t care – this is ritual for me. Drive into Boulder, eat at Pete’s, that’s what happens. I dove straight into a chicken burrito with pinto beans, cheese and lime-cilantro rice. Admittedly, not the most adventurous toppings.

In a piggish moment, I also asked for a side of chips and queso and an additional side of chile pesto. Everything was inhaled in minutes, cartoon-character style. The pesto ensured that nobody would want to make out with me for weeks. Scarfed or not, it was delicious for the 30 seconds that it lasted.

Impression: As good as sleeping with a cheerleader. Mood: Determined 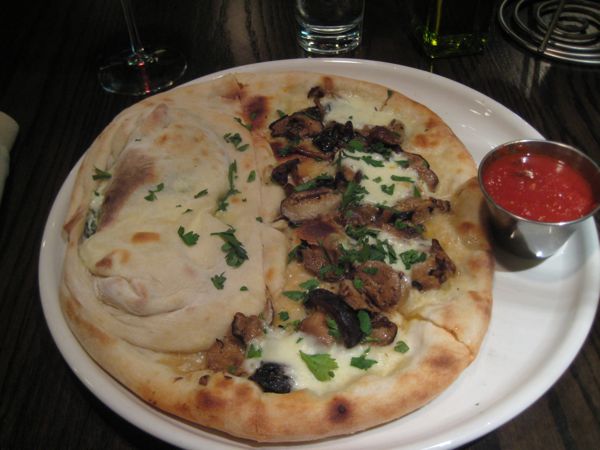 I visited Bop based on a crazy-eyed tip from a friend, who went on and on about the different toppings, like road blood orange chicken, sweet potato, grilled scallops and beets. As someone with an interest in pizza toppings, I took the bait, figuring that nothing could be worse than the pizza I’d had in Chile.

The cheery little dining room and patio made for a great solo dinner. The menu overwhelmed me with things that I was sure to love, like barbabietole (beet salad), trio bruschetta (whatever was in season) and the finocchiana pizza (peppers, arugula and spice).

Based on my friend’s drooly recommendation, I ordered “The Bop”; half a spinach/ricotta calzone and half of a hazel dell mushroom pizza. The two items were of the same piece of dough, kind of a Siamese twin combination. It was tasty and filling, and I left knowing that this would be my new pizza spot in town. 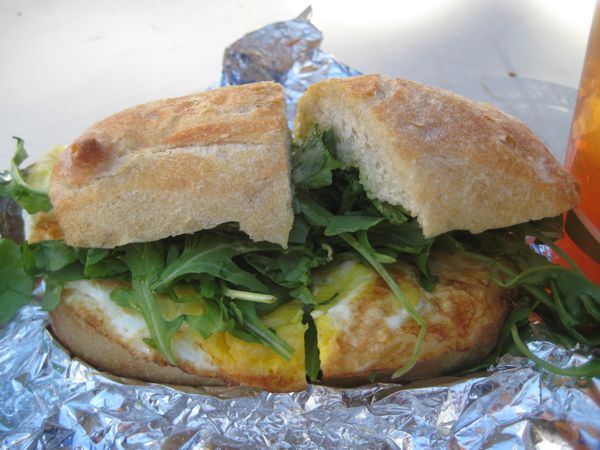 The Saturday Farmer’s Market is one of my favorites in the world. Hippies, blue-collars and unreasonably hot dudes with dogs all collide on 13th street, filling their recyclable bags with local produce.

A row of vendors serve food that covers almost everything from around the world. One place was selling fresh gazpacho, another spicy curry chicken dumplings and another jalapeño cream cheese burgers. It being morning, I went for an inspired egg sandwich from Modern Market.

“The Rocket” was filled with a perfectly fried egg (just a little yellow goo), arugula, tomato, provolone cheese and a spread of basil pesto something-or-other. I washed the tasty-as-fuck sandwich down with a mango iced tea from The Orange Tent and floated back to my hotel, passing out for a nap that only gluttons would admire. I had only been awake for only two hours. 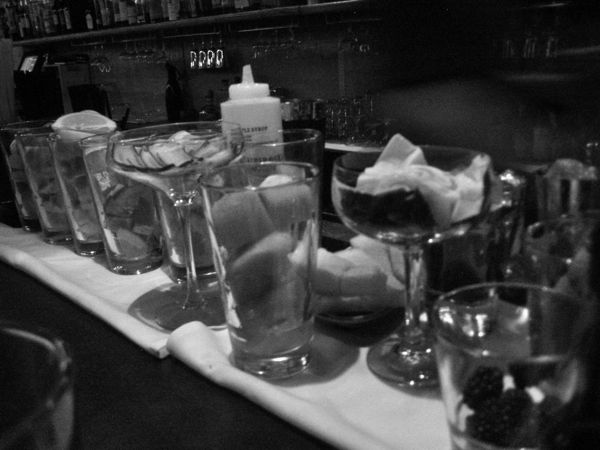 I nipped in for a drink at The Bitter Bar based on Yelp reviews. They were right – the drink menu was stunning, a real feat of mixology. A vested and well-groomed barman walked me through a few of the recipes, including a Green Tea Pimm’s and the Basil & Basil (bourbon, sweet vermouth, bitters and Thai basil).

I snagged a Gray’s and Torreys, which would take NASA weeks to reverse engineer. Included were all sorts of things promised to be from high altitudes, like elderflower and alpine liqueur. It sipped like a brook gurgling through a field, cold, earthy and powerful. Definitely not like anything I’d ever had before.

The bar is inside of an equally buzzing catch-all Asian restaurant called Happy. The food looked freaky good, especially the sirloin-shortrib burger.

Impression: The kind of place Bond would saunter into if he were in Boulder. Big if. Mood: Buzzy. 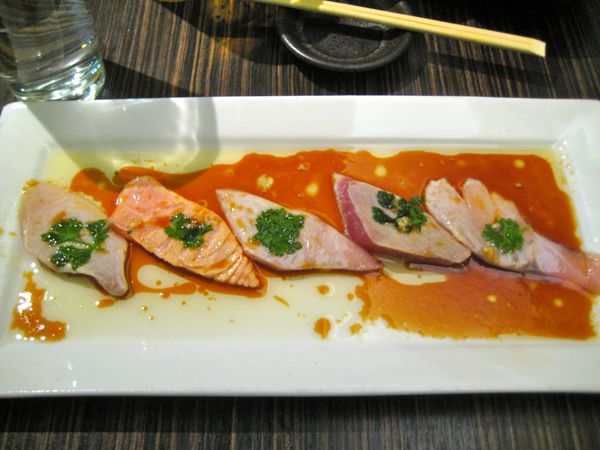 God damn you half-Japanese restaurants, you do it to me every time. I have eaten at Hapa for about 10 years and still love it. There may be more authentic sushi out there but I dig the wackjob spirit of this place and go nuts for their menu.

The waitress knows – she just knows – that I have an idea of what I want, but still challenges me. She gives me the gentle nudge, dude, look at the specials. I know they’re probably insane and fresh and exotic but I order the same thing every time that I come here.

Everything is great but the sashimi is tops. Hapa just frigging nail this dish. Look at the picture. Deny it. I’ll punch you. 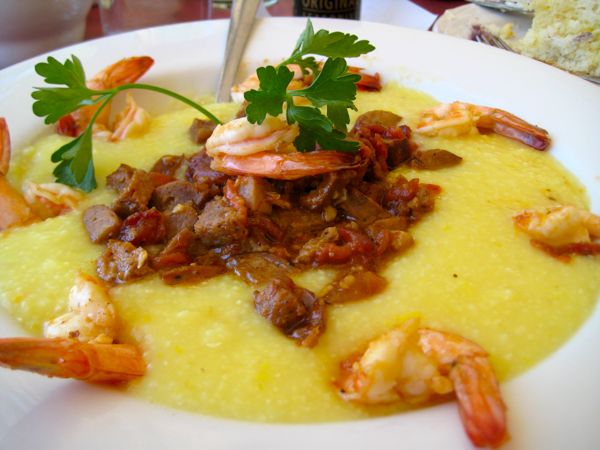 This big house is a tres popular brunch spot with a Creole vibe. I waited about thirty minutes for a table and was placed on the porch, overlooking a zoo of people also waiting for seats. Lucile’s is a Boulder hot spot.

First, let’s say that the biscuits here are untouchable, as is the homemade blueberry jam that you can pile on in teaspoons, or simply dump from the jar onto your plate and gulp like a primate. My brain told me to wait for the rest of my food before I finished the heavy biscuit. My brain is not often party to decisions at breakfast.

I ordered the shrimp & grits, which was one of the prettiest looking dishes I’ve ever had. I was looking for more zing than it delivered (a little bland?), but I did enjoy the andouille sausage and red peppers piled on top. After 48 hours of eating, I decided to put down my fork and call it.

Impression: Very good but not great, atmosphere wins out though. Mood: Gritty and gurgly. 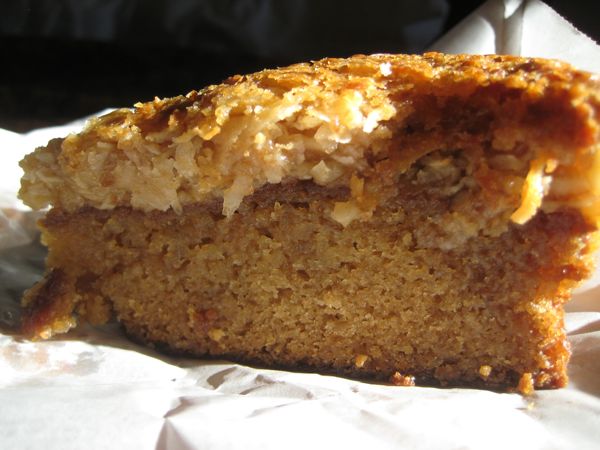 What was just going to be a caffeine run on the way to the airport became an event after I asked the woman behind the counter what the oozy apple cake on display was. The slice, supplied by Boulder’s Breadworks, worked the cake part (molasses and apple?) with a topping made of oatmeal and sugar guts. It was mushy, gushy, ooey, gooey and threw me for a Louie. Thank JC above that I gave Flatiron a shot.

I’ve resisted using the word “sublime” until now in any writing. But I’m gonna say. It was sublime.

Impression: One of the best desserts I’ve ever stumbled into. Mood: Turgid

If food is what you want, it’s what you’ll have. Perhaps not in the quantities Mr. Gates has been known to enjoy it, but we’ve all got to start somewhere. Why not whet your appetite with MatadorNetwork’s Food Focus Page?

That’s where you can find out about 5 Asian Food Blogs to Read before Travelling to Asia, Essential Cookbooks for the Culinary Traveler, and restaurant recommendations and reviews from all over the world.