MARKET DAYS HAS come to symbolize the winding down of summer in Chicago. Its tagline is “Respecting diversity,” and they mean that the gayest way possible.

I’ve made it a tradition to attend every year. With 400 vendors hawking their wares to the spend-happy gay and gay-friendly masses, and 40 local and national performers rocking out on four stages, Market Days is prime-people watching. Shirtless, sweaty, and drunk, the crowds descending upon Chicago’s Boystown are the reason some call the festival “Meat Market Days.” 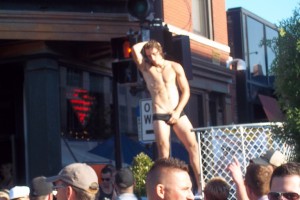 The festival celebrated its 30th anniversary this year, and folks were as intensely sloshed as ever. The booze flowed, with many of the gayborhood bars drawing the largest crowds with promise of drinks and topless eye candy, kiddie pools and champagne-slushies.

Because of the crush of amorous strangers, I learned almost immediately it was a bad idea to wear flip-flops. Not only are the crowds sloppy and clumsy, but I often found my feet in puddles of warm beer.

Groups congregated around hotspots, either to wait in line for libations or to just dance their pants off. Roscoe’s hose-wielding lifeguard, perched in a white seat head-and-shoulders above the crowd, cooled off hot-blooded daddies in the mood for twinkies.

Chicago Diner served up vegan and vegetarian fare in front of the Roscoe Stage, attempting in vain to replace booze with sustenance. 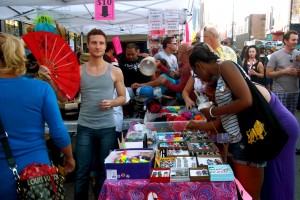 Minibar’s pretty-boy bartenders set up shop beneath a black scaffold of disco balls and speakers, pumping out music to compete with the din of the revelry.

I’m not a crowd-person, so I kept myself socially lubricated to cope with the stumbling public. Soon, I became one of them. For research, of course.

Market Days is a draw in itself, but if it needed any help, it has it in quality music performances every year. For example, disco queen Gloria Gaynor was the closing act this time out, helping the genre “survive” in the only way an artist of her magnitude can: by appealing to the gays.

Other performers this year were Darren Criss of Glee-Warblers fame, glam-rock dandy and America’s Got Talent finalist Prince Poppycock, and festival regulars 16 Candles. 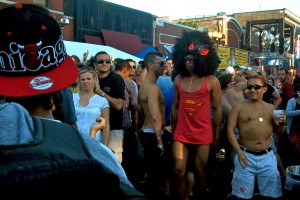 Pride takes many forms, most of them awesome.

Not all is right in Boystown, though. Sometimes, fandom gets out of control. While I attempted to make my way to the front of the main stage for Gloria Gaynor, with a reluctant friend in tow, I was punched in the head. Sure, I was trying to get through a dense crowd area (my first mistake) but I didn’t leave my manners at home. I said “excuse me” along the way, with many folks allowing me safe passage. Still, my push forward was thwarted halfway with a hearty punch to the noggin by an unseen assailant. So much for good times for me.

Though the festival officially shuts down at 10PM per city ordinance, the party continues in the bars. The appropriately named Cocktail was a bacchanal, to say the least.

Muscle gods dressed in nothing but banana-hammocks and Adidas gyrated awkwardly on the small stage in the back while bar patrons stuck dollar bills in their waistbands. One particular stallion of a man showed off his, um, “skills” to the cheers and drunken adulation of the bar. He was promptly pulled off stage. Booing ensued.

Up and down the Halsted strip, complete with rainbow-striped pylons showing off just who’s in charge of this corner of Chicago, those still wearing clothes danced to Top 40 pop radio standards and their remixes (Britney Spears, natch). Many festival-goers remained lingering outside, waiting in line to continue their Sunday night binge session. 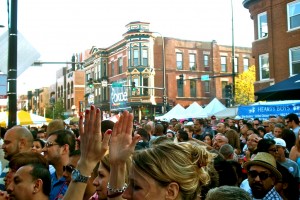 Moments before being punched in the head…

You can stumble around for hours at Market Days, accomplishing nothing more than pickling your liver. In the crowd of thousands, a local sees old friends, co-workers, and frenemies over the course of a day — or at least I did. Air kisses and empty promises of “I’ll catch you in a bit” are traded, mostly because the next line for alcohol seems more promising than the last. But there’s always something to see and when it comes to it, if I’m in town next year, I’ll probably be right back at Market Days.

Tagged
Events Trip Planning
What did you think of this story?
Meh
Good
Awesome

The 11 Sexiest Live Shows Las Vegas Has To Offer
Every Roller Coaster at Cedar Point, Ranked
The 8 Best Movies and Shows To Watch Before Going To Paris
5 Must-Visit Music Venues Off Nashville’s Main Drag
The 11 Most Impressive Buddha Statues in the World