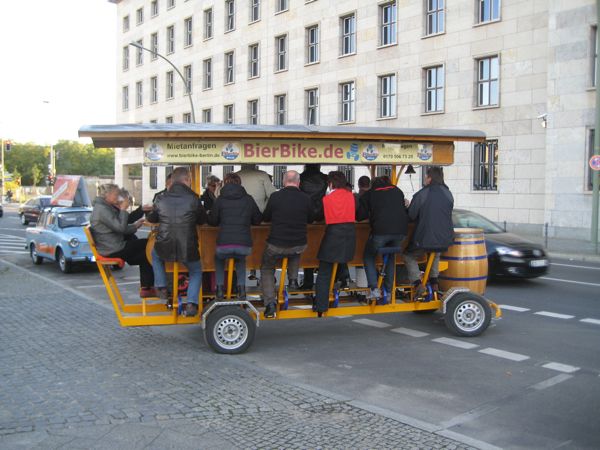 What has four wheels, twelve seats and a keg of beer? It’s a beer bike, idiot.

Coming around the corner, Berlin’s Bier Bike is a shocker. Heads turn and lips pucker with envy as passengers clank glasses and down foamy pints of suds. Cars nervously skirt by the slowly moving vehicle, tourists point in awe and all the while the bike’s passengers do all that is necessary – pedal and drink. 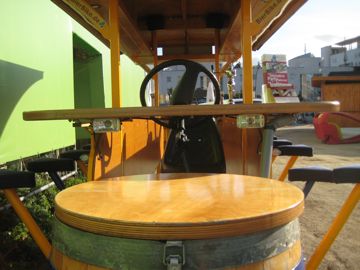 A bizarre contraption, the Bier Bike has been on the streets of Berlin since this May. It operates on a simple system. Eleven peddlers sitting on bar stools move their feet in unison to propel the bike forward. The company’s sober driver sits up front and steers, making sure that the bike stays on course.

No injuries have been recorded as of yet, according to the bike’s driver/manager Ulli. The most common customers tend to be those with celebration in mind, often bachelor parties or sports teams. 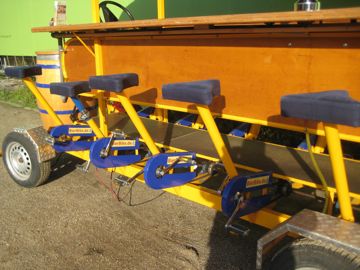 I asked Ulli about the most any on group has had to drink. The record currently stands at 50 liters. The question then had to be asked – were they British? “Yes, of course.”

The Bier Bike – which comes stocked with brewskies and a sound system – is available to rent for two hours or more. It (technically) holds up to fifteen passengers and runs around 100 Euros for a two-hour tour and more for longer excursions. Beer is an additional cost, running €3.50 per liter.

The bike runs two routes around, one through Mitte and another towards the north side of Kreuzberg. For more information visit the Bier Bike website.

Matador is bike happy. If you do nothing else, be sure to check out some of the freakiest bikes on the road in Hal Amen’s photo essay. Also check out Attica! Attica!’s plan to tour the USA by bicycle and raise money for World Bicycle Relief in the process.