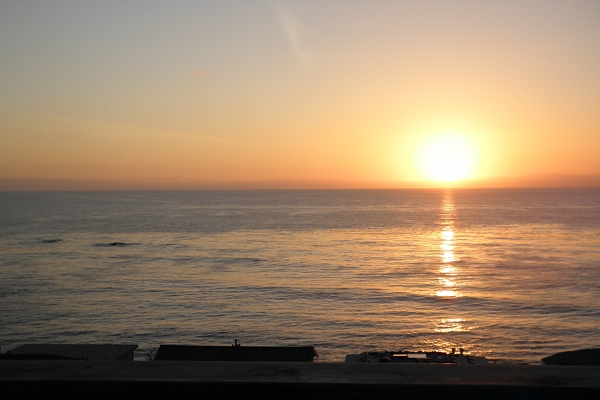 The view from the Rooftop Bar in Laguna Beach. All photos by the author.

I saw the Pacific Ocean for the first time a few weeks ago when I visited California. Some other firsts I encountered while in Orange County were endless champagne, edible orchids, and an 8 pound hamburger.
Here are 8 spots to eat and drink in Orange County, California.

According to the Riptionary, the dictionary of surf speak, zimzala means: “Free spirited person who finds peace with the sand between their toes.”

There’s no sand on the floor of Zimzala, but it is just a few blocks from the beach. The restaurant is a part of the Shorebreak Hotel. On the wall are pictures of locals, and everything at the restaurant is sourced locally. The menu features burgers, sandwiches, seafood, and egg dishes at lunch/brunch and steak and more seafood options for dinner. 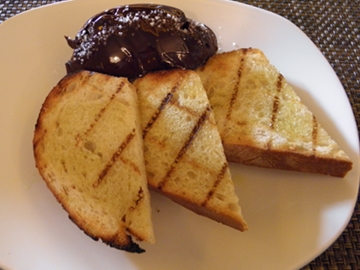 Chocolate ganache, you make me so happy.

Meant to be eaten as a spread on sourdough toast, I can confirm that it tastes just as good, if not better, eaten from the take-out box with your finger in your hotel room later that night.

Yes, Ruby’s Diner is a chain restaurant designed in a 1940s diner-kitsch style, but the one in Huntington Beach is right at the end of the pier, so it has some pretty great views of the Pacific and the sunset. It’s also a good spot to watch surfers, people fishing from the pier, and on occasion, you can see dolphins and seals in the water.

The Catch Restaurant in Anaheim

Next to the Anaheim Angels stadium and close to the Honda Center where the Anaheim Ducks play, The Catch is a popular location for those looking to get dinner and a drink before baseball or hockey games.

Fresh seafood options are on the menu as is the OMG burger – 4 pounds of beef with ½ head of lettuce, 10 slices of cheese, and with a side of 2 pounds of fries. It can be split to serve all the diners at a table, or if you want, you can try eat it all yourself. Do it in 1 hour and get $500. So far, only one person has actually done it. (I wonder if the $500 would cover the stomach-pumping that seems like it would be an inevitability after eating that much at one time.)

They serve a rotation of beers from local breweries like TAPS Fish House & Brewery and Newport Beach Brewing Company with taster options available. Happy hour in the lounge/by the bar is from 2pm to 7pm Monday to Friday.

Every dish at K’ya Street Fare is under $10. I paid more for parking during my two-night stay at the hotel than a lunch would cost. The idea behind the restaurant is that every dish is something that you could buy as street food in cities around the world. 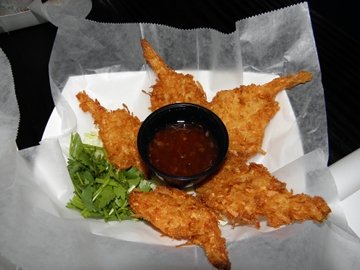 The menu is organized by place – New York, for example, has buffalo wings, ¼ lb. hot dog, cheeseburger, gyro pita, and falafel pita. The food is served in paper baskets. My favorites were the brie & prosciutto sandwich “from” Paris, coconut shrimp “from” Miami Beach, and the bbq meatballs “from” Los Angeles.

Happy hour is from 4pm to 7pm with food and drinks specials.

I ran into an artist on the beach, and I asked him what was good at the legendary brunch at Las Brisas. “Everything,” he said, “Everything is good there.”

As far as I could tell, he was right. Granted that opinion may be because my champagne was refilled every time I took a sip, or at least it seemed that way, and surely it would have been rude to wave off the waiter, wouldn’t it? Watch out if you want to make your champagne a mimosa, orange juice is an extra $3 at brunch. The options at brunch are the four-course menu (that’s the one with the never-ending champagne) or the buffet. Reservations are definitely in order. Sunday brunch starts at 8 am, and by 11am, it’s full with people waiting.

The view of the beach is beautiful, and you can dine out on the patio for happy hour from 4 to 6pm during the week. To get the best views, ask for a window or patio seat when you reserve.

Anaheim White House is a posh Italian restaurant, decorated with gold and white, in a house that was built in 1909. Many of the individual rooms were kept intact, which means there are small individual dining rooms. It’s pricey, with the cheapest entrée at $16.50, so it seems like a good place to take a date if you’re looking to show off to someone who would like a spot that presents the crème brûlée tableside and has napkins that are folded to look like shirts. Or if they’re a celebrity – David Beckham, Madonna, Drew Barrymore, and others have dined here. 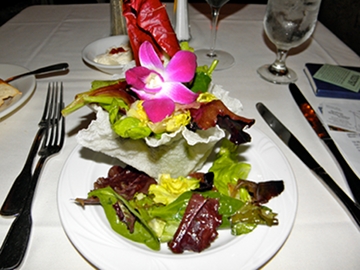 The salad at White House, complete with edible orchid.

Signature dishes at the restaurant include the salad with passion fruit vinaigrette dressing and the salmon chocolat. The salad is served in a rice paper bowl and topped with an edible orchid. Orchids don’t really taste that good, but it does mean everything on the plate is edible, which I think is pretty cool. Salmon and chocolate do in fact go well together, which I would never have guessed.

The restaurant is philanthropic: starting in 2005, Bruno Serato, the owner, started providing pasta dinners to 150 homeless children in Anaheim. The “motel kids” in the Boys and Girls Clubs get a meal provided by the restaurant 5 nights a week, which might be the only guaranteed meal that the kids get. The program has received press attention, and you can donate pasta at the restaurant. 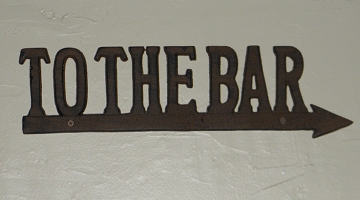 Being told the Rooftop Lounge on top of the hotel La Casa Del Camino was a filming location for “The Real Housewives of Orange County” wasn’t really a selling point for me, but the unobstructed view of the sunset was beautiful (none of the housewives were in sight, nor Kobe Bryant, who apparently hangs out there).

It’s popular with locals and tourists, and the wooden tables fill up fast before sunset, making it standing room only for the “show.” Southern California has balmy weather, even during winter, but it can get chilly – warmers and blankets are available.

Happy hour is from 3 to 5pm during the week, and it’s half off mojitos, beer, wine, and well drinks. It’s open for lunch with a full menu, and appetizers are served in the evening.

With its straightforward name, the House of Big Fish and Ice Cold Beer has daily catch seafood options and casual dining items, like quesadillas, burgers, sushi, and buffalo wings. The beer ranges from the organic, like Samuel Smith Organic Raspberry Ale, to the award-winning, like Lost Coast Great White.

It’s a relaxed and casual place with wooden furnishings, fish mounted on the walls, and sports playing on the flat-screen TVs. The wrap-around patio is lit with Christmas lights, and the views aren’t as unobstructed as they are at the Rooftop Lounge, but you can still see the ocean.

Disclosure: The Anaheim/Orange County Visitor & Convention Bureau organized and sponsored all the meals & drinks, except for Ruby’s Diner.