CHINATOWN ROCKS. A former red-light district that spent most of the last half of the previous century in disrepair, Honolulu’s Chinatown has been on the up and seen extensive regeneration over the past couple years.

The coolest bars in the city are here, so step away from the tourist scene, the Tiki-bars and umbrella cocktails of Waikiki and head into the grittier, sharper, more exciting Chinatown district.

Art is a central theme in Chinatown’s regeneration. At most of these bars you’ll find rotating art exhibits on display.
The first Friday of every month is the First Friday Art Walk. Galleries stay open late and the bars get slammed. If that’s not your thing, try the new Slow Art Fridays on the third Friday of the month. Slow Art Friday gives viewers time and space for greater appreciation of the art on display—something that has been getting neglected in the rowdy, alcohol fueled First Fridays.

A few blocks back from Hotel (see below) in a short alleyway, Mercury is a small, divey space where you’ll often see local burlesque act Cherry Blossom Cabaret perform.

Winner of local newspaper supplement Metromix’s Best Bar 2010, Bar 35 is a fancy-looking red bar that has lots of comfortable couches and around 200 different types of beers from around the world. Monday night at Bar 35 is Happy Hour all night. Whichever night you visit, be sure to try Chef Valentini’s handmade, thin-crust pizzas, which have unusual, gourmet toppings like sweet chilli and tzatziki . 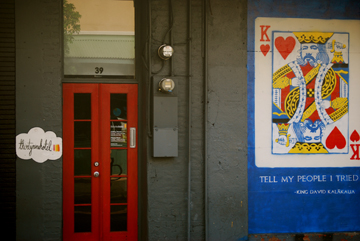 Photo (and Feature Photo) of Thirtynine Hotel by the author.

Thirtynine Hotel has a great, large lanai (patio) and soon after it opens at 4:00 P.M., fills up with local workers enjoying a pau hana (after work) cocktail.

Thursday night is Prohibition, a speakeasy themed night with Jazz music, classic movies and delicious cocktails. In true Prohibition-era speakeasy style, you will need to know the password to get in: here’s a hint, become Prohibition’s Facebook Fan and they’ll email it to you weekly.

You’ve got to love the simplicity of thought that went into naming Chinatown’s bars; Bar 35 is at number thirty five; Thirtynine Hotel is at 39 Hotel Street and Next Door is indeed next door (to Thirtynine Hotel). The space has a warehouse feel with a large open floor, red brick walls and mystery door in the middle of one wall – a relic from when the building was split-level.

This is one of the best venues in the city to catch live music; you’ll often find local bands like The Jump Offs, GRLFRNDS and Clones of the Queen playing here. Friday night is electro/breaks night Blow Up and they also throw lots of fun, inventive parties.

It’s easy to forget that Manifest actually opens at 7:00 A.M. and is a pretty chill coffee spot during the day. Nights at Manifest are the flip side: parties, live bands and arts shows all take their turn at this bar that only opened in August 2009 and has already been given a shout out by the New York Times.

Another good place to see local bands and visiting acts. From the outside, Loft, which is above a bakery and looks a little dingy. Once you get up the creaky staircase, you’ll find an inviting interior with giant red lanterns and a few comfy sofas.

A few blocks back from the main-drag of Hotel Street, Soho Mixed Media Bar was the winner of Metromix’s Best Nightclub 2010, Soho’s best night might be the 80’s themed Acid Wash on Wednesdays.

The Ultimate LGBTQ Guide To Honolulu

The 5 Bars Everyone Should Check Out in Honolulu