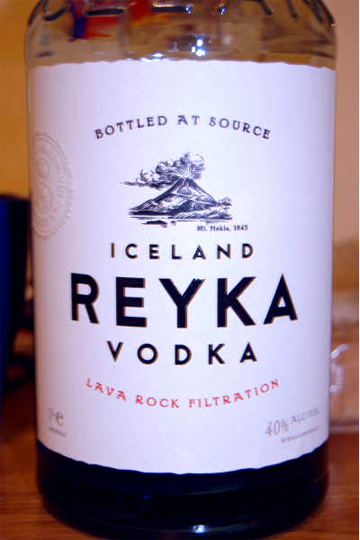 It’s Friday night in Reykjavik, and if the stories you’ve heard are true, things are about to get crazy.

DESPITE ICELAND’S INFAMOUS financial collapse, things aren’t as cheap as they’ve been rumored to be. A bottle of wine can be prohibitively expensive in a restaurant and a beer will run at least $6 for a pint.

Yet the residents of Reykjavik are still out en masse, partying until the sun comes up, and you plan to join them.

But first, a little lesson on how to make the most of the rúntur without winding up bankrupt yourself.

In the small towns (though towns might be an overstatement – most are just a sparse collection of houses) that dot Iceland’s countryside, the rúntur was devised as weekend entertainment by youth bored during the winter months of near-endless night.

The word rúntur translates to “round tour” and that’s just what it is. Teenagers cram into their cars and make laps along the local roads, stopping occasionally at a car park to socialize.

In Reykjavik, rúntur is also the name given to the weekend pub crawl, when partiers make their way around town to multiple bars and clubs. Ask any Icelander and they’ll be the first to admit – they drink a lot. 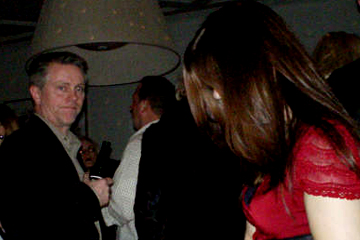 Straight-laced and sober during the week, Icelanders let loose on weekends. It seems that alcohol is so expensive, they figure if they are going to pay a fortune to drink, they might as well really go at it.

Hopefully, the first stop you (along with everyone else) made in Iceland was at the Keflavik Airport Duty-Free shop. The duty-free sells wine and liquor at up to 60% less than what it costs at the city shops.

A liter of strong, smooth Reyka vodka that runs about 2100 kronur at the Duty-Free might sell for 6600 kronur in the city. If you didn’t think to stock up, you’ll need to make an afternoon stop at the Vinbudin liquor store to prepare for the evening’s festivities.

Start with dinner at home or in a restaurant, but not too early. You’ll need stamina to party until dawn so rest up and don’t begin your evening until around 9pm.

The Reykjavik rúntur is a dressy affair so look the part. For men, jeans are okay so long as they are fashionable, though slacks and a sport coat are also popular. Women’s fashions run the gamut from sexy jeans and slinky tops to trendy dresses, and it matters little what the weather calls for. It’s not unusual to see bare legs and peep-toe shoes in the dead of winter.

After dinner, head back to your hotel (or better yet, a new friend’s apartment) and start drinking. If you want to be on par with everyone else, you’ll need to have several drinks under your belt before you even think about walking out the door. 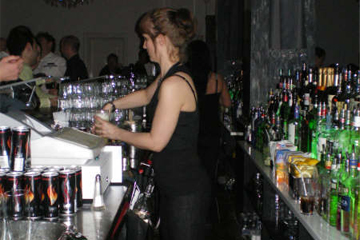 The main rúntur activity takes place on and around Laugavegur Street.

You may be surprised to find the quiet cafés and restaurants you were in just hours earlier have now been transformed into raucous clubs and bars. For live music, head to Nasa, which hosts everything from performances by local jazz musicians to sets by famous DJs.

Feel like hitting the dance floor? Check out Sólon or B5 – both bistros by day, dance parties by night. Kaffibarinn, owned by Damon Albarn of the band Blur, is a more low-key alternative and good place to relax before heading to the more lively clubs. 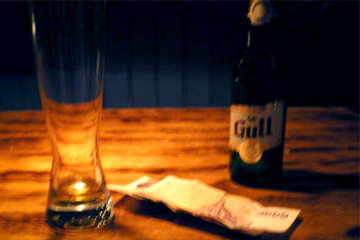 Beer was banned in Iceland until 1989, but now several local breweries produce it, and quite well actually. The most popular brands are Viking, Kaldi, Thule, and Egils. At $6-8 a pint, beer will be the cheapest option and if you’ve followed the rúntur protocol and pre-lubed a bit at home, it should be all you need. Most clubs also offer inventive cocktails and all your favorite standbys, but these libations will cost you much more.

Once you’re in the clubs, there’s no pressure to spend. It’s not unusual to nurse one or two beers all night and buying a round for friends is virtually unheard of. The more frugal partiers are also known to sneak a few nips from a pocket flask as they travel between bars. 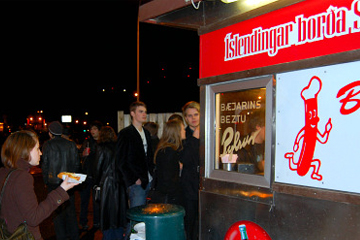 As 5am approaches the clubs begin to empty and the streets fill with the well-dressed and well-tipsy. Wander down near the harbor to Bæjarins Beztu Pylsur, the most popular hot dog stand in town. Icelanders take their hot dogs seriously, making them with lamb and covering them with remoulade, ketchup, mustard, and raw and fried onions.

Wait in the long but fast-moving line and then take your bounty back to the city’s main square to join the gathered crowd. The scene is much like last call in any bar around the world: separated friends are reunited and trade stories of the night’s escapades, singles mingle and find their last-minute hookups and everyone else begins to stumble home.

In summer, the sun will be shining brightly overheard while in winter, it will be dark for several hours – just long enough to let you rest and recover for the next round.

Tomorrow, after all, is Saturday.

This article was originally a blog on the Matador Community. See Katie Hammel’s Original blog here. Create your own blog and profile on Matador today.