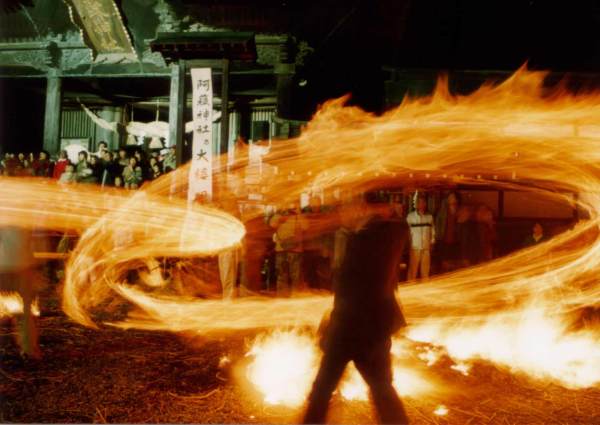 TO ANYONE WHO’S ever gone camping while traveling, the alluring effect of a fire is all too familiar.

People gathered around its flames, taking turns dropping a tiny amount of water (or liquor) into its path, stretching their legs ever closer in attempts to seize the heat and capture its awesome energy.

It provides a sense of community. Swapping travel stories. Sharing drinks. Making smores (how internationally known are those, by the way?).

From dragon tales, to rites of purification, to a prominent mention in the 4th book of Harry Potter, fire plays a larger role in world culture and history than most would believe. Even in this modern age, with bonfires replaced by central heating and their light by alternating current, this common chemical reaction remains central.

In Japan, for example, you can catch it here: 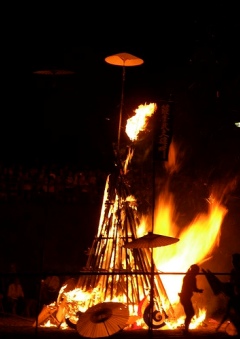 By far the most unusual expression of fire I’ve ever had the chance to observe.

Once upon a time, nearly 900 years ago, two brothers by the name of Soga led an attack in the middle of the night against their adversary. Apparently unable to secure torches for the journey, they took to using the closest objects available, paper umbrellas, to light their path of vengeance.

This festival, the Soga Don No Kasayaki (そがどんの傘焼き), is celebrated in the southern city of Kagoshima (and Odawara, closer to Tokyo), the Naples of Japan, a city blessed with a beautiful landscape and some legendary hot springs.

In late July, residents gather along the riverbank to bear witness as a large stack of paper umbrellas is burned to the ground, accompanied by dancing, shouting, history lessons, and demonstrations of strength.

Yakitori (焼き鳥)
Grilled chicken on a stick, available at many supermarkets and most festivals and open-air markets.

Takoyaki (たこ焼き)
Fried pieces of dough filled with mayonnaise and a piece of octopus… isn’t it helpful to read Japanese?

Yakiniku (焼き肉)
The cream of the crop, Japanese BBQ. A variety of meat grilled over an open flame and served on a bed of rice. 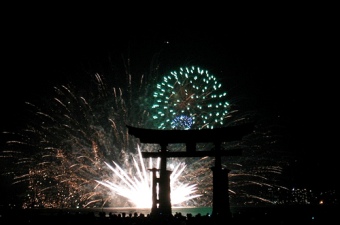 Shigeru Miyamoto wasn’t too far off giving a mustachioed plumber from Brooklyn the power to shoot fire from his hands upon contact with a very special flower.

Flower fires, from the Chinese characters 花火, or, in layman’s terms: fireworks.

The 4th of July celebrations on American soil would be put to shame by many of the festivals across Japan in the month of August. Each prefecture, each city, strives to be the best, boast the biggest number of explosions in the sky, the loudest cracks, the most intense flames….

Try walking anywhere in Japan at the end of the Obon holiday (honoring the dead) and not see Japanese in their light summer yukata or kimono, wearing geta (wooden shoes), and on their way to an all-day celebration of food and drink before twilight sets in and the sky is ablaze.

Of all the locations I’ve seen firework celebrations in Japan, I prefer the island of Miyajima with the famous floating shrine. Be careful to escape quickly, though, because you could easily miss the last train to Hiroshima in the back of a 300,000+ crowd.

4. The Volcano Is Lit… On Purpose 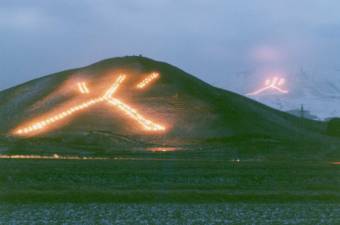 Mt. Aso, or Aso-san, was once one of the largest volcanoes in the world.

If you’d have glimpsed it thousands of years ago, it would have been a vision to make even Dante nostalgic for the 9th circle: dozens of smaller eruptions, venting the pressure from the larger magma source, yellow sulfur scattered across the landscape, burning blue just at the edge of the treeline… these explosions eventually occurred too quickly and frequently, causing the entire mountain to collapse in on itself, creating the largest caldera in history.

Locals see the peaks of Aso as resembling a sleeping Buddha, with the active peak, Nakadake, his navel.

An image of such harmony, belying the essence of the mountains, explains much of the culture: fire festivals are held every year to pay homage to this awesome force, fields burned to form one of the largest kanji (Chinese characters) on the planet, nearly 350 meters in length: 火.

The Hifuri Shinji festival, held around the same time of year, is just as impressive, though on a smaller scale.

Participants, professionals, and tourists light torches in front of the Ichinomiya Aso Shrine and set them spinning in circles, creating literally what Johnny Cash meant figuratively: a burning, burning, burning ring of fire.

The act of setting the fire loose, or flinging the fire, as it were, is meant to ensure a good harvest in the coming months and to celebrate the union of the gods. 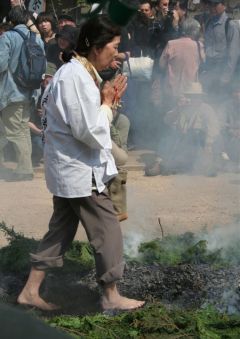 Purification by fire is a common belief amongst certain sects of Buddhism. On the island of Miyajima in mid-November, one can watch in angst as priests shuck their sandals and brave a river of hot coals, cleansing the body as well as the soul.

Walking on coals isn’t as painful as some would have you believe; unless you’re standing in one place for more than a few seconds, it’s unlikely you’ll feel anything more than a warm tingling sensation… coal is not particularly conductive.

6. In Your Own Neighborhood

If you happen to be spending time in Japan in early-mid January, be sure to take advantage of the Tondo Festival. At the lunar new year, neighbors gather to light a huge bonfire and share stories, sake, and mochi (Japanese rice cakes, traditionally eaten at the new year).

Although the Tondo is more commonly attended by residents, I seriously doubt there would be any hesitation over letting a friendly visitor partake in the festivities. All in good fun, in the spirit of celebration.

How have you observed other cultures using fire? Share your stories.

30 awesome Japanese idioms we should start using in English 7 adorable English villages that are straight out of a storybook The 9 coolest flags in the world and the meanings behind them 21 amazing images of the new Seven Wonders of the World 9 boardless, cardless games to play anywhere